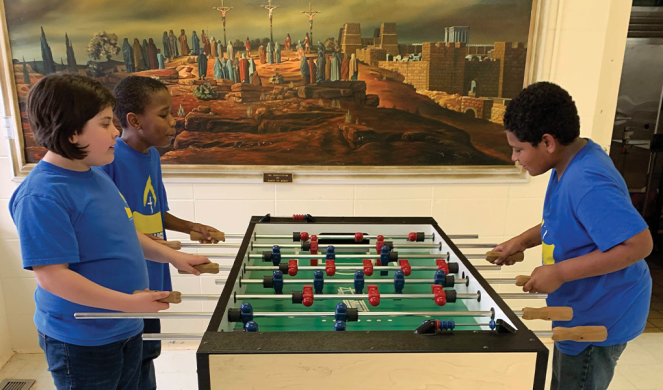 ANNA: Do you like playing kickball?
OLIVIA: Yeah. They always scream when they play.
ANNA: Do you yell too?
OLIVIA: Nope. Just talk.

This is Olivia. She’s playing third base.

ANNA: Do you like going to school here?
OLIVIA: Yeah.
ANNA: What’s your favorite part?
OLIVIA: Um, Science. We learn how to change the color of celery.

So far I know three things about her: She’s 8 years old, she likes science, and at least one of her parents is in prison.

ANNA: Are you guys winning?
OLIVIA: I believe so. I think it’s my turn to go over there and kick.

Every student here has a parent in prison—from the little boy on first base to the girl watching, alone, from the sidewalk. Little Light Christian School exists for these children.

KHOURY: The minute a kid’s parent walks into a jail, they become seven times more likely to go there themselves.

Robin Khoury is the principal of Little Light. But she didn’t set out to start a school for anyone. Khoury’s actually a hairdresser by trade who started volunteering with a local prison ministry. There, she made a discovery.

KHOURY: When somebody’s mother goes to prison, they begin to struggle in school. People think they have ADHD, but it’s probably not. It’s just, you know, a reaction to the trauma that they’ve been through. God just tapped me on the shoulder and said, these are your kids.

In 2012, Little Light Christian School enrolled its first six students. Now, that number has grown to 28. The school gives the kids a free, Christian education. More than that, it gives them a chance to be loved.

In the cafeteria, a gaggle of students swarms Khoury. One boy brandishes a comb and a spray bottle.

KHOURY: He says I told him he could do my hair today, but I don’t recall saying that.
STUDENTS: You said that! You did!
KHOURY: He has all these witnesses. I think they’re conspiring against me. STUDENTS: Miss Robin! You really did say that! She needs to change it up a little once in a while.
KHOURY: Oh, they’re tired of my hairdo!

Khoury loves these kids. But they’re not always lovable. One little boy spent most of his first year at the school hiding under tables and desks.

KHOURY: He was like this little volcano. And if you looked twice at him, he would just flip out. And I mean, he would throw furniture, he’d run away, he’d get under stuff.

He was two years behind in school when he arrived. But Little Light has a flexible curriculum adapted from resources Khoury used to homeschool her own children. It lets students move at their own pace.

For this little boy, it was a breakthrough.

KHOURY: He got it that he could work ahead, that he wasn’t constrained to the grade that he was in. Miss Sherry showed him, look how much you’ve gained. You made all these gains. And so if you keep doing this, you’ll be caught up.

Now he’s almost at grade level, and his behavior has also improved. But it’s still a challenge: Older kids are actually more difficult, since they have fixed behavior patterns. Khoury says she had to expel one student because he wasn’t safe to have around other children.

That’s a deeper problem that needs to be fixed before the child can reenter a classroom.

KHOURY: So we can’t help everybody. And we’ve had to accept that, that we are one little bitty school…

For the students who remain, Khoury says it takes a lot of time and prayer, but eventually, they begin to open up.

After lunch, the students gather in a little white classroom. There are musical instruments everywhere: A drum set, a keyboard, a ukulele. Ernie Tullis is the music teacher.

TULLIS: All right, how about we start with Old Time Rock ‘n’ Roll? [PIANO] No? Okay.

Before coming to Little Light two years ago, Tullis spent over a decade touring with singers like Aretha Franklin, Michael W. Smith, and Carrie Underwood. Now, he plays for a different kind of crowd.

The students sit in blue plastic chairs and kick their feet while they sing. Their pitch might waver sometimes, but their enthusiasm never does.

It’s not all hairdos and singalongs at Little Light. There are plenty of rough days. But with God’s help, they’re still going to take that light and they’re going to let it shine.