Jesse Boyd is one of the four missionaries arrested in Montana 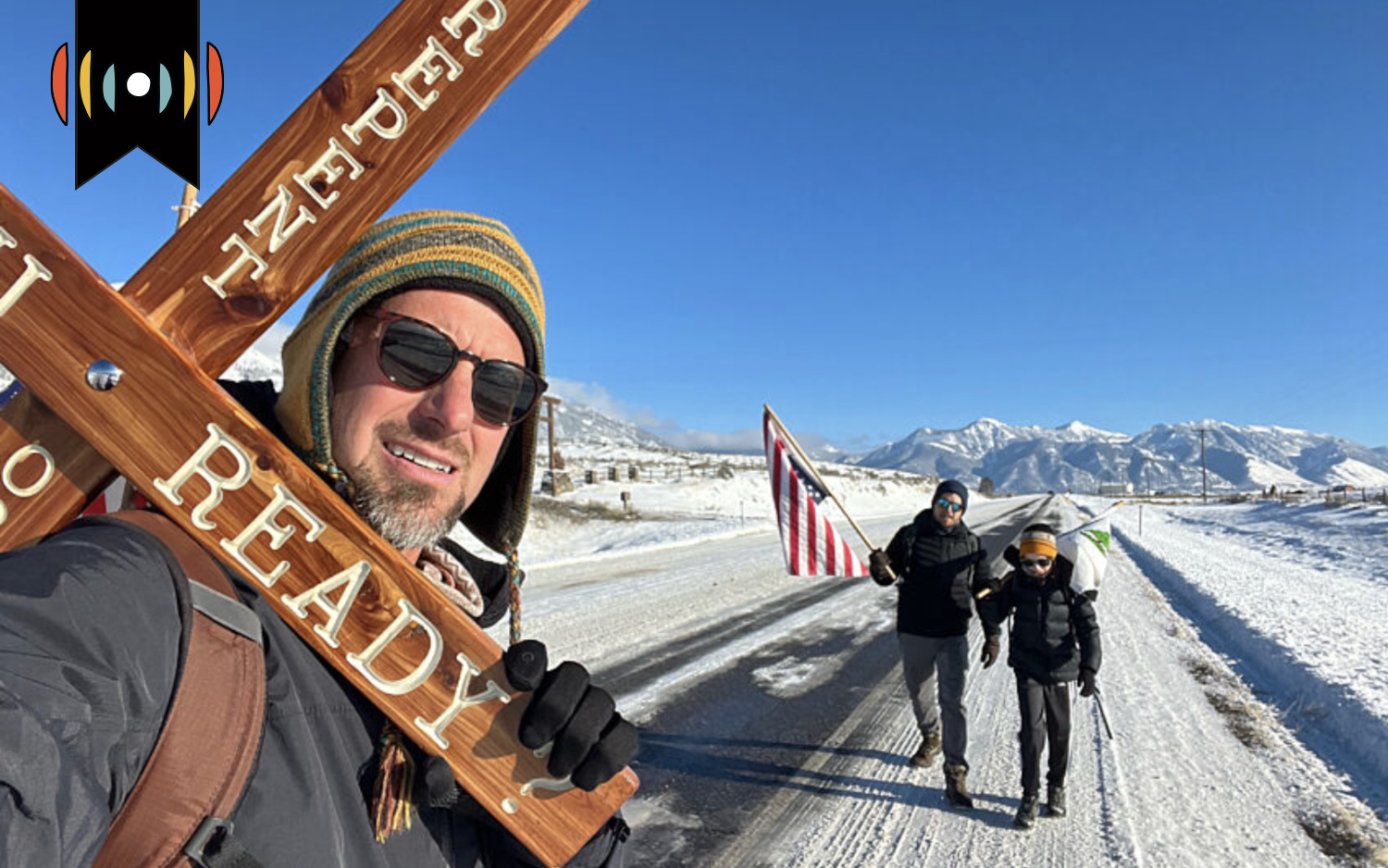 MYRNA BROWN, HOST: Jesse Boyd is one of the four missionaries arrested in Montana after that roadside confrontation. He joins us to talk about his experience.

JESSE BOYD, GUEST: Thank you, Mary. It's nice to be with you all today

REICHARD: Today, you’re talking with us from your home in North Carolina. When did you get back from Montana? How are you feeling now?

BOYD: Well, it was nice to return home. We couldn't make it in time for Thanksgiving. But some kind residents there in Montana invited us over to join with their family. So we were blessed. And it was a long three day drive. But there is no place like home. And it's nice to be where I can walk outside in a t-shirt and enjoy the sun and a few leaves left on the tree because it was sub-zero the last day we were walking in Montana.

REICHARD: Tell us, what does a typical day look like when you’re walking across America?

BOYD: So a usual day just begins: we get up in the morning, we spend time with the Lord and we pray about the day and we go out to the very spot we stopped walking the night or the afternoon before and we resume. And we'll just go throughout the day, depending on the weather, the temperature, or just whenever we're tired. Or wherever we are, or wherever we're trying to get we'll walk as far as we can. The typical day is about 20 total miles. That's about average. We've walked as much as 72 miles in a day through the night when we were in the middle of nowhere. And we've had days where gospel conversations or witnessing encounters slow us down and we like to be slowed down for those reasons and we'll only do a few miles. And sometimes we're just so tired or even sick that we have to stop. And we entrust the Lord to those things. We're not on a schedule. And so usually we just go out and we tag-team. I walk a leg, my partner Eric walks a leg, my daughter Bethany is either walking with me or with him. And we switch off and whoever is not walking will move the support vehicle up the road. And we carry Gospel tracts and Bibles and we try to talk to whoever will talk to us—passers by, people that are out in their yards, people on the side of the road. And we've had over 2,500 gospel encounters on this journey. And we've given out over 100 copies of the Bible. We've talked with law enforcement who are checking on us, people that stopped to ask what we're doing. It's just been an incredible journey so far. And we've not had any trouble until we walked into Madison County, Montana.

REICHARD: We heard earlier from WORLD correspondent Gary Perilloux about your encounter with Brad Terrell in Madison County, Montana and your subsequent arrest and confinement. What was the scariest part of the ordeal for you?

BOYD: Well, the scariest part as a father is to be threatened and attacked in the presence of my children. In those situations, I'm the first line of defense. As the team leader, I'm the first line of defense between evil and those I'm entrusted with leading and my 12 year old son and my 18 year old daughter who were with us. We realized that such a venture is fraught with danger. I mean, just from drivers. I mean, there's so many people texting and playing on their phones nowadays, that we have to be aware at every moment, even when we're walking on a wide shoulder or on a back road. And so we're not naive to dangers that are out there. But we've never been confronted like this. Some people will flip us off driving by or make cat calls or curse out the window. We've even had some things thrown at us just walking down the road, but nothing that we can't just shake the dust and move on.

And so this individual, I'd never seen him before. A big bully does what bullies do when someone stands up to him, then they start screaming and hollering as if they're a victim. But he seemed to calm a little bit, and my ministry partner tried to reason with him. And at that point, I was able to discern that he didn't have a gun or a weapon in his hand. So I felt like the weapon was no longer needed. I re-holstered it and I handed it to my ministry partner and said, “Just put this out of the way for now.” And at that moment as angry as he was, my objective was to reason with him and it just wasn't possible. As soon as I handed the weapon off and it was put away, he got right up in my face and began to scream and holler and blaspheme the name of the Lord. I put up with this for five to seven minutes of him screaming in my face, spit getting on my face, enduring threats. We were told we weren't welcome in Montana, that there were rifles trained on us from a distance and that we'd be shot if we moved. And so I don't know. What do you do in that situation? I couldn't move without making contact with him. And the guy is telling me that rifles are trained on me. So eventually, he physically assaulted me. And I pushed him off, he had me pinned against my vehicle. And I warned him and then he threw a punch, hit me in the face, and at that point I fought back.

REICHARD: How did your faith inform your response to this trial?

BOYD: Well, I'll communicate exactly what I communicated to this man. He told me that I ought to fear him and be afraid and I made it abundantly clear that I fear no man. I fear God, and he ought to fear God because if he doesn't repent, God will crush him like a grasshopper on Judgment Day. And I serve a sovereign God who holds me in the palm of his hand. I've been purchased by the shed blood of the Lord Jesus Christ, my faith is in His death, burial, and resurrection. I don't serve myself, I serve Him. And God has protected me and our team for 5,500 plus miles along highways and byways, and in a plethora of situations. I had no reason to believe in those moments that God was in control and that we could trust Him to look out for us.

REICHARD: What good, if any, do you think can come from this incident?

BOYD: Well, I think anytime that you have to trust the Lord and wait upon the Lord to avenge and to expose wickedness is an opportunity for spiritual growth. It doesn't matter what happens to you—whether you're in the right or you're in the wrong—any of the trials that we face as Christians, we ought to be able to take a step back and ask the Lord, “Lord, what are you trying to teach me from this?” Because if we serve the Lord, the Bible says that all things work together for good to them that love God, and who are called according to His purpose. And I don't see the Apostle Paul sitting in prison and complaining and doubting his faith. I see him in prison writing to the Philippians to count it all joy. And so those things aren't easy, Mary. I don't confess that I'm at complete peace or that I'm not struggling or concerned. But I do know that God has shown himself mighty on our behalf since this happened. We didn't know anybody in the state of Montana in that area of the state when this happened. And people just came out of the woodworks. We were locked up in jail. There was a period where I was in solitary confinement for 20 out of 24 hours in a day. When we were released from jail after four days, there were local Montana residents that I didn't know from Adam, who were standing there with my wife and my daughter and my son and welcomed me out of that jail with hugs and open arms. And I'm just baffled by that. I have friends in Montana now that I wouldn't have in Christ if none of these things had happened. But as far as my faith, it’s unshakable. I committed to the Lord that we would walk across America. And that's what I intend to do. I don't make a promise to the Lord and not keep it. That's what I fear. I don't fear men and threats. And I just think Christians in this country need to be courageous with their faith and take a stand and not allow things like this to deter them from being obedient to the Lord.

REICHARD: Last question, if you get a chance, will you walk across America again?

BOYD: I've committed to walking to the Pacific Ocean. But if the Lord wants to lead me to turn around and walk all the way back to the Atlantic, at the end of the day, I want to be obedient to the Lord. And I'd be lying to you—even despite all of this—if I didn't say that it has been a joy and just a true blessing to walk America. You don't see things in a car or even on a bicycle and have the types of encounters. I'm reminded of the old frontier preachers and the circuit writers who saw America at that pace and the testimonies and the things God did. And I'm blessed by what we've been able to experience in the believers we've met.

REICHARD: Jesse Boyd, from Full Proof Gospel Ministries, good to have you.

BOYD: Thank you, Mary. It’s been an honor and a blessing.