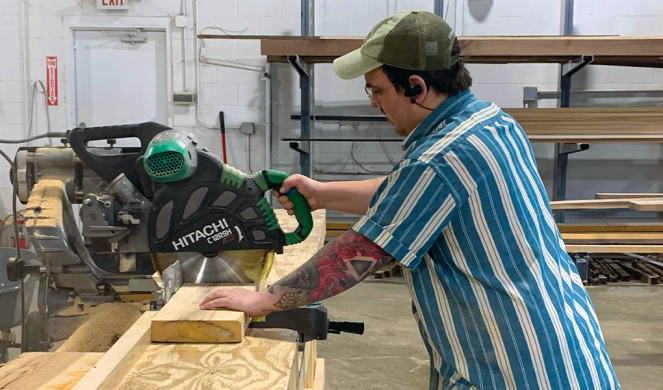 NICK EICHER, HOST: It’s Thursday, the 8th of August, 2019. Glad to have you along for today’s edition of The World and Everything in It. Good morning, I’m Nick Eicher.

With your help, each year we recognize a handful of non-profit ministries on the front lines fighting poverty and brokenness.

EICHER: To be considered for one of our Hope Awards, the help the ministry offers first has to be challenging—that is to say, it can’t just give handouts to people.

Second, the help also has to be personal, not a one-size-fits-all approach. Third and finally, it needs a spiritual component.

Over the last few weeks we’ve highlighted four of our recipients, and today WORLD Radio’s Anna Johansen introduces you to our last honoree: a woodworking shop in Indianapolis.

PALMER: We hire…instead of the cream of the crop, the bottom of the barrel.

PALMER: We recently hired someone…and I said to the manager who did the hiring, I said, well, what do you think? And he said, he’s perfect. He’s an ex-addict and he has no skills.

So why the unusual H-R strategy? It’s because Palmer has unusual business goals. His purpose is to help men coming out of homelessness or addiction reboot their lives.

PALMER: We normally receive the men that we serve from local agencies that are serving the poor and the needy, like homeless missions and others.

Typically, the men don’t know much about making furniture. The newcomers get paired with a more experienced craftsman and head out to the production floor to learn on the job.

The production floor is a massive workspace. It’s filled with machinery and neat stacks of raw wood. A suction motor and a network of silver pipes keep the dust in check. The whole place has that mellow smell of fresh cut lumber.

MCCLINTOCK: Woodworking is relaxing. You can start out with a few boards and then transform it into something that’s practical…

Zach McClintock has been working at Purposeful Design for a year and a half. Like many others, he had zero woodworking experience when he started. In fact, six months before he came to Purposeful Design, he was addicted to drugs.

MCCLINTOCK: My entire check, everything I was working for was being turned around and going to drugs. [2:18:35] And my tolerance had increased so much that…the only reason I was doing it was to not get sick.

That changed when McClintock enrolled in a recovery group. After he got clean, he started looking for a job in carpentry. One day, he spontaneously stopped by Purposeful Design.

MCCLINTOCK: They happened to be like in a huge jam. For whatever reason, they were short guys and they had to finish a bunch of tables.

McClintock introduced himself to one of the managers.

MCCLINTOCK: And he’s like, well, can you sand? And I was like, yeah, of course I can sand. And he’s like, hop in the shop. And I just started sanding on some piece of wood that I had no idea what it was going to.

Hiring men with little experience and still producing quality work is a tough balancing act. One new employee started attaching legs to a table…and didn’t check the length of the screws. They went straight through the tabletop and out the other side. It’s kind of hard to fix four holes in a glossy tabletop. But Palmer used it as a teaching moment and moved on.

Purposeful Design’s clients now include big time organizations like Purdue University and Eli Lilly. But Palmer says it’s not about money. Purposeful Design is a nonprofit and sales are just a means to an end.

Vince Hicks can testify to that. Before he became a Christian, Hicks was jobless, doing drugs, and dealing drugs. At the age of 21, he says God transformed his life.

HICKS: The first thing he said was, you know, your life was really never about yourself. It was about me. It was about the love that I’ve had for you through my son.

Hicks started some temp work with David Palmer, then moved into a full time position with Purposeful Design. That was about six years ago. He’s now the lead finisher, in charge of varnish and polish.

He’s also a spiritual mentor to a lot of the guys.

HICKS: It affects me when guys don’t show up, when we hear about our brother that’s fallen back into what they’re dealing with. But it just brings the reality that we’re all one bad decision away.

Earlier this year, Purposeful Design implemented a zero-tolerance policy for drugs and alcohol. Before, men who showed up high or drunk got a second or third chance. But the ministry realized that wasn’t good for the business or the men. The staff now conducts random drug tests on the production floor and fires those who fail.

HICKS: I honestly can say I’m in the war on drugs.

MCCLINTOCK: I’ve had jobs where I’m like, I probably could have stayed home today and they wouldn’t have realized that it wasn’t here, but not here. Everyone’s always quick and eager to say hello and I love you and care for you and asking if you’re okay if you need anything.

The men circle up each morning for prayer and a devotional. It’s not mandatory, but most of the guys attend regularly. There’s also a weekly Bible study. McClintock says he looks forward to it every Monday. He doesn’t claim to be a Christian, but he is reading a copy of Evidence that Demands a Verdict that one of the staffers got for him. And he does have a whole lot of questions.

MCCLINTOCK: If you do have good mentors and people who…don’t just shut you down when you ask challenging questions, then you’re more apt to kind of be like, okay, well, you know, maybe this is for me.

That’s our last Hope Awards finalist for 2019. Generous donors have provided $1,000 awards to each of the five ministries we’ve highlighted. But they have also made available a $10,000 grand prize award, and who wins that is up to you. So please visit our Hope Awards website and cast your vote for whichever ministry you think ought to win. The address is wng.org/compassion. Voting is open till Friday, September 6th.