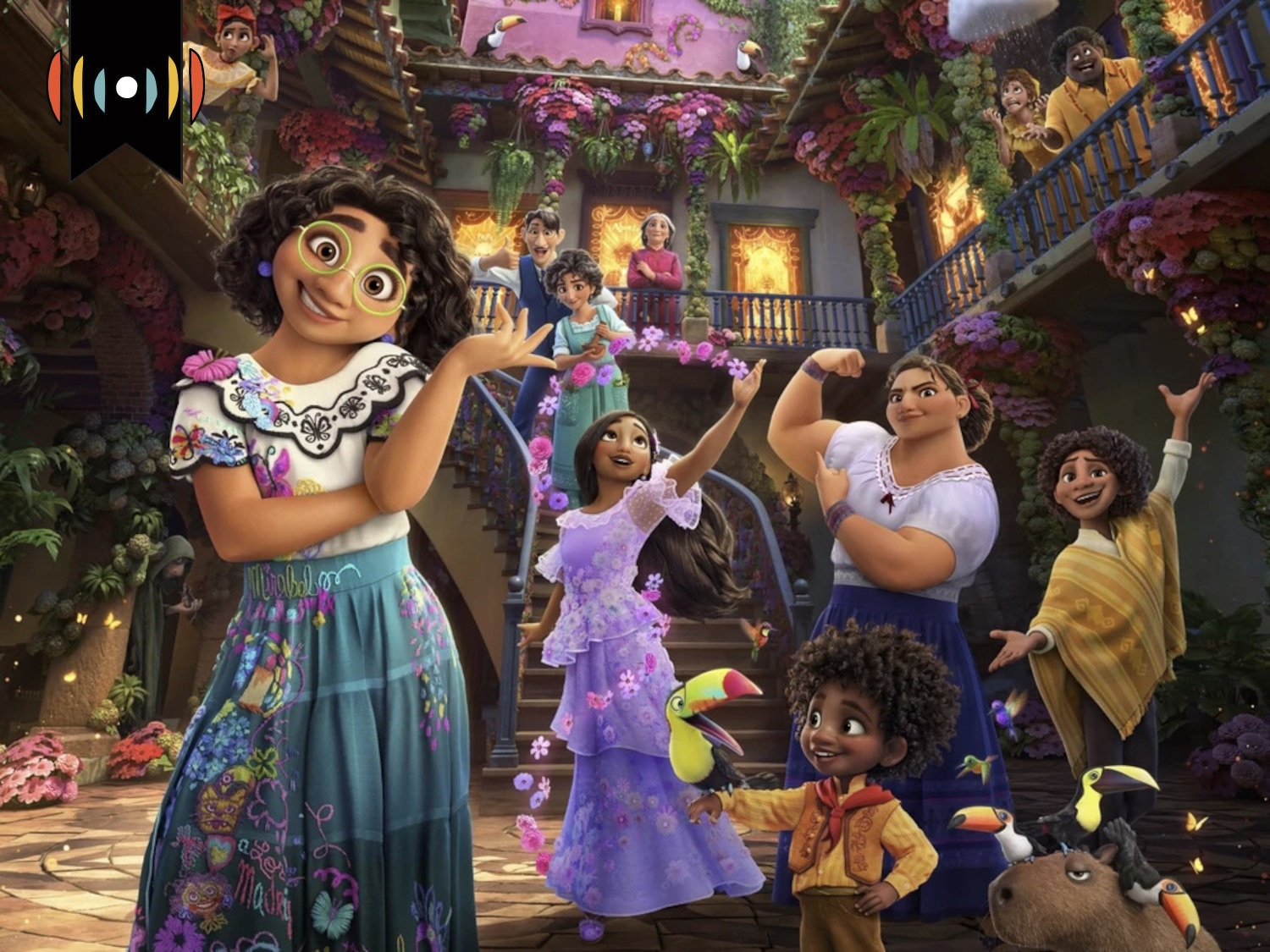 MARY REICHARD, HOST: And I’m Mary Reichard. Coming next on The World and Everything in It: New Year’s movie night.

If you’re staying home tonight and need some ideas for what to watch, our reviewers have you covered.

EICHER: We asked three of our reviewers to think back and share some of the best shows and films they’ve seen during the last year.

You’ll hear from Sharon Dierberger, Collin Garbarino, and Emily Whitten, who starts us off.

EMILY WHITTEN, REVIEWER: My family watched quite a few TV series this year, but my favorite of all might be season 1 of Cranford. A BBC production from 2007, Cranford is based on a novel of the same name by Elizabeth Gaskell from 1851. Here’s a clip from the trailer.

CLIP: The heartwarming tale of ordinary lives…’Dr. Harrison, Mary wishes to go on the lake, and she insists she can row’…transformed in one extraordinary year…

Like Pride and Prejudice or Sense and Sensibility, this series includes a sweet romance or two. But the book’s title hints at the larger scope here. Cranford is the name of a small British town, and in it, we follow the story of a reluctant group of townsfolk making their way—slowly—into the modern era. Brace yourself for explosive cultural upheavals caused by trains, modern medicine, and marriage across class lines.

CLIP: I could never have mistaken you, Mr. Holbrook.

CLIP: Mrs. Forester! A new young doctor is coming to live in our midst.

Be aware, the series includes surgery in the days before anesthetics, so younger kids and the faint of heart may want to skip those scenes. I’ll also warn you that for storytelling reasons, the second season isn’t worth watching in my opinion. That said, Season 1 offers some eminently binge-able family fare, especially if—like me—you have teen girls anywhere in the near vicinity.

SHARON DIERBERGER, REVIEWER: Here in Minnesota, one of our simple winter delights is cozying up in front of the fireplace with a great book or movie, family and friends gathered close, and hot chocolate to go around.

We can’t let New Year’s slip by without checking our annual holiday classics list. We’ve seen these so many times we’ve memorized lines and speak them along with the actors—and yet, we always see something new. Here are a few:

Announcer: “Holiday Inn. Never has there been such a show as this. From Easter to Christmas. From the 4th of July to Thanksgiving. There’s a song for every holiday, and a holiday for every song.”

We start with Holiday Inn, starring Bing Crosby, Fred Astaire, and Marjorie Reynolds. Bit of trivia: that song “Be Careful It’s My Heart” was expected to be the big hit in this film.

Instead, “White Christmas” grabbed people’s hearts and became the inspiration for the movie, White Christmas with Crosby, Danny Kaye, Rosemary Clooney, and Vera-Ellen.

Bing Crosby and Rosemary Clooney singing: “I’m dreaming of a White Christmas. Just like the ones I used to know….”

Of course, that’s a must-see–with lots of fun banter, music and lyrics. My husband kindly tolerates me singing along:

Then, without fail, comes It’s a Wonderful Life.

Clarence Oddbody, the angel: “You see George, you really had a wonderful life.”

Suzie: “Look Daddy, teacher says, every time a bell rings an angel gets its wings.”

My husband knows every Mr. Potter and George Bailey quote. And he sounds more like Jimmy Stewart than Stewart does:

Not as many people may have seen It Happened on Fifth Avenue. The film stars Victor Moore as a squatter who appropriates the New York mansion of a wealthy family when they head out-of-state for the winter. An assorted group of good-hearted, but down-on-their-luck people join him. Many funny subplots and romances ensue. Even the police join the caper:

Policeman: How long you been living here?

McKeever: “Well, I’ve been here for the past three winters. And speaking for my friends here, they’re very nice people. Ex-servicemen with their wives and children—who are merely, shall we say, taking advantage of much needed shelter. You wouldn’t want to arrest them on Christmas Eve, now would ya…”

Finally, Christmas in Connecticut, with Barbara Stanwyck, takes us back again to simpler times. Stanwyck gets into hot water because she writes a cooking column, pretending to be an accomplished homemaker. She actually can’t cook a lick and has no husband and baby as she claims. She suddenly has to become the person she isn’t, in her farmhouse that really isn’t hers. It’s a comedic plot with lots of mix-ups.

Barbara S.: “Who says there isn’t any Santa Claus? Look what I found in my stocking.

Dennis M.: laughs, “Heaven help a sailor on a Christmas like this.”

Sydney G: laughs, “This is the jolliest, merriest Christmas I ever spent!” [Laughs]

COLLIN GARBARINO, REVIEWER: As I started thinking about my favorite movies and TV shows from 2021, I noticed a theme emerging. Some of the best entertainment this year reminded us of the importance of family.

My family’s favorite movie for all ages this year is easily Encanto. The animated film feels fresh and relatable because Disney abandoned its old formula for this one. There are no princesses or villains. Instead, we see family members work through the pain caused by unmet expectations. Lin-Manuel Miranda’s songs are pretty great too.

Disney also hit a home run with the family-friendly series The Mysterious Benedict Society. In this show, four orphans go on an adventure to save the world from an evil genius who’s spreading lies. Even though the series features orphans, it has family at its heart. And I was impressed by how well the message seemed to conform to a Christian worldview. My kids and I are definitely looking forward to season two next year.

The best TV show for teens and adults this year has got to be WandaVision. Yes, it’s a Marvel superhero series, and yes, we’re all feeling a little bit of superhero overload. But WandaVision was by far the most inventive show of 2021, taking a couple of Avengers and dropping them into classic sitcom episodes. It’s bizarre Twilight Zone-ish stuff, and in the first few episodes you have no idea what’s going on. But at its core WandaVision is a show about the heart’s desire for family. The final episode disappointed me a bit, but on the whole WandaVision was a big risk that paid off. Most people should see the Avengers movies before watching WandaVision. But my wife watched the series with me and enjoyed it, despite never having seen the films.

In 2021, several movies from totally different genres emphasized the importance of family, and I don’t know which is the best. You could check out the sci-fi epic Dune, the sports biopic King Richard—whew, Will Smith might win an Oscar for that one—the superhero adventure Shang Chi, or the coming-of-age drama Belfast. There have been a lot of winners this year. But one relatively quiet movie stuck with me longer than I expected.

In Cry Macho, a much too old Clint Eastwood serves as a father figure to a troubled teenager.

Mike: I’ll tell you something. This macho thing is overrated. Just people trying to be macho to show that they’ve got grit. That’s about all they end up with.

The boy thinks being a man means being tough and violent. Eastwood’s character shows him a more authentic—really a more Biblical—understanding of masculinity rooted in protection and care for others. Cry Macho has a slow pace, but it’s worth watching.

Sure, 2021 had its share of shows that promoted self-reliance and rugged individualism. But the stuff that really hit home reminds us how everyone needs the love of a family to thrive.

You might want to inform your listeners that there is a back face musical number, "Abraham," in "Holiday Inn." In this day and time, some of the listeners might have a problem with that.

All of the holiday movie classic favorites suggested by Sharon are great ones my family and I have watched over and over. Another great holiday classic to add is The Shop Around the Corner (Margaret Sullavan, James Stewart). The original You've Got Mail (Tom Hanks, Meg Ryan), it was also remade into the musical In the Good Old Summertime (Judy Garland).