Mystery in the sky

WORLD Radio - Mystery in the sky 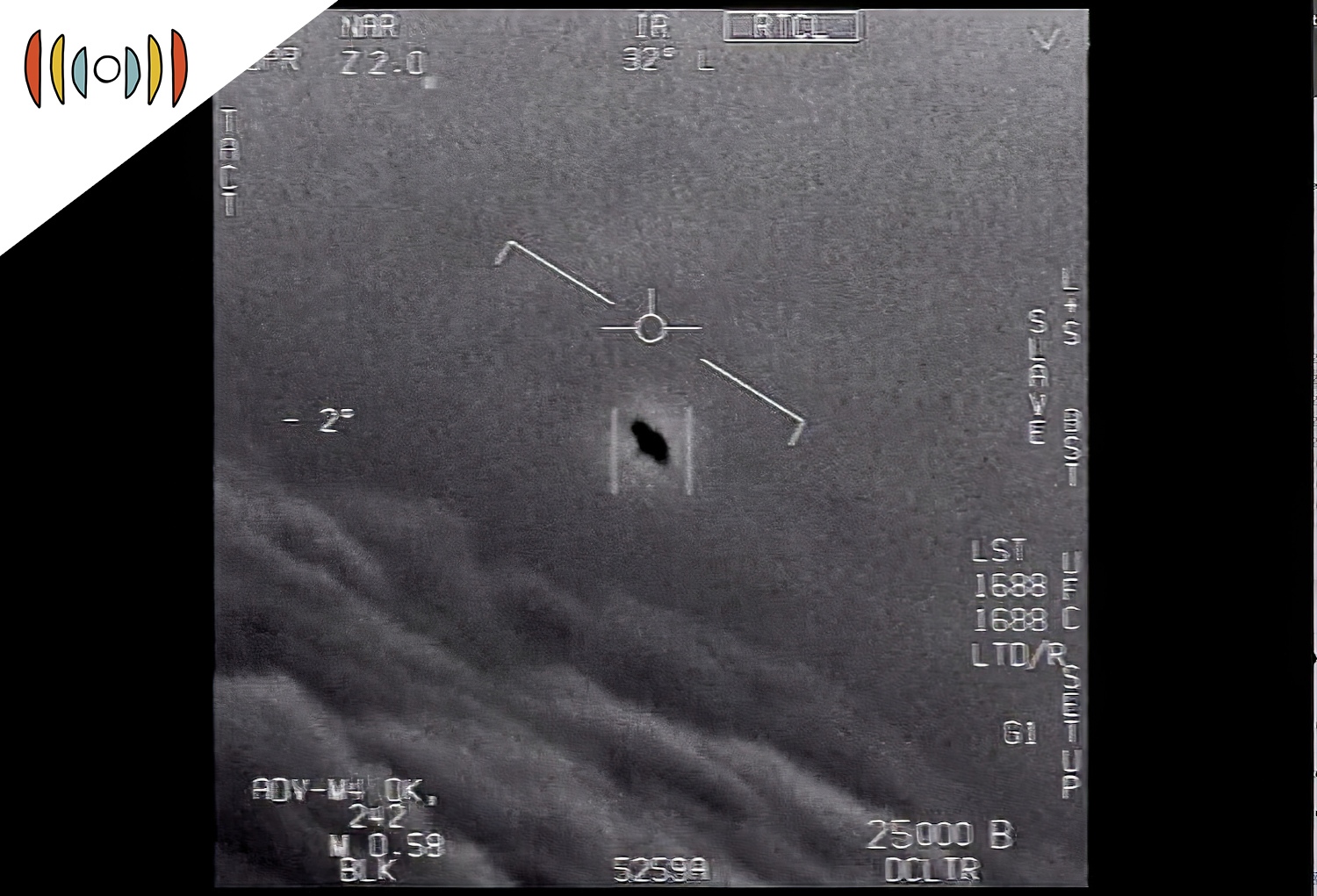 Not the flying-saucer-little-green-men kind of UFO. Well, not that we know of, anyway. These are flying objects caught on tape that not even the U.S. military can identify. Are they rogue weather balloons? Foreign drones? Or something else?

BUTLER: The Pentagon drew up a report analyzing 144 confirmed sightings and delivered the results to Congress last month. WORLD’s Anna Johansen Brown reports now on what all the fuss is about.

AUDIO: There’s a whole fleet of them, look on the ASA.

AUDIO: They’re all going against the wind. The wind’s 120 knots west.

Graves was a Navy pilot flying an F/A 18 Super Hornet off the coast of Virginia. His plane had just gotten a radar upgrade, and something kept showing up on it. The infrared targeting camera caught it too: An unassuming disc-shaped blob. But it didn’t act the way flying objects are supposed to act.

Graves says he saw objects like that every day for a couple of years. Another pilot almost collided with one. The squadron filed an official mishap report.

In the wake of those sightings—and hundreds of others like them—Congress commissioned a report in 2020. It directed the Pentagon to assess these objects, figure out if they pose any threat to the United States, and determine whether the Department of Defense is equipped to handle them. The report came out last month, accompanied by lots of hype and speculation.

Mark Rodeghier is the scientific director at the Center for UFO Studies. It’s a research group that analyzes UFO sightings and often identifies what those objects really are. Rodeghier says the report got a lot of attention because nobody expected UFOs to be a serious subject.

RODEGHIER: The government has said that UFOs weren't a subject worthy of investigation. They weren't scientifically interesting. And they weren't a threat, definitely not a threat.

But now it seems that’s changing. The government report detailed 144 verified sightings of UFOs or—as the government calls them—UAPs: Unidentified Aerial Phenomena. And it tried to make sense of them by identifying what they might be.

Typically, UFO sightings have pretty boring explanations. People see the moon or a bird or a distant plane or an airborne plastic bag and report them as UFOs. Mark Rodeghier says 95 percent of sightings can be easily explained. But the objects in the Pentagon report were a little more slippery.

Like the Nimitz encounter. In 2004, Alex Dietrich and David Fravor were pilots based on the USS Nimitz off the coast of California.

New advanced radar on a nearby ship had detected “multiple anomalous aerial vehicles.” According to the radar, the objects descended 80,000 feet in less than a second. Dietrich and Fravor took to the skies to investigate. Here’s Fravor describing the encounter on 60 Minutes.

FRAVOR: So as we’re looking at this I said, Do do you, do you see that thing down there?

The two pilots saw a white object, about the size of a fighter plane, shaped like a Tic Tac. Alex Dietrich says they saw no wings, no exhaust plumes, no means of propulsion. But the object was moving around erratically.

Fravor tracked the object for about five minutes.

FRAVOR: So it’s climbing still, and when it gets right in front of me. It just disappears. Disappears. Like gone.

A few seconds later, the USS Nimitz picked up the object on radar again—this time, 60 miles away.

The Nimitz encounter is one of the most well-documented UFO sightings. Despite the Pentagon’s scrutiny, no one has been able to identify it for sure. In fact, out of all the encounters detailed in its report, the Pentagon was able to identify just one. It was a large, deflating balloon. The rest? No idea.

ANDREW FRAKNOI: We all wish we had more data. For most of the incidents, we just don't have enough data.

Andrew Fraknoi is an astronomy professor at the University of San Francisco. He says the Pentagon was very honest in admitting it just didn’t have enough information. And that’s normal, especially because of the nature of UFOs: They happen quickly. No time for proper study. Sometimes, an object might appear to be moving at superhuman speeds, but maybe it’s not.

FRAKNOI: There's a lot of discussion about whether the cameras were moving, and the aircraft was moving or the other flying thing was moving. You have to know the speed of everything to figure out how fast the unknown object was moving.

RODEGHIER: And one of the main reasons is we can't predict where they're going to occur. So how do you study something that you don't know when and where it's going to happen?

But the military has a vested interest in figuring out what these objects are. Many UFO sightings have been near U.S. training or testing sites. And if they’re some kind of new breakthrough technology from another country, the government wants to know about it.

But if this is new tech from Russia or China, it’s far, far beyond anything the United States has. The objects appear to maneuver abruptly at speeds hundreds of times faster than our fastest jets.

RODEGHIER: They don't use the word aliens. But we all know they really mean aliens.

There’s no proof these objects are extraterrestrial, but the report left the door open for further investigation. Rodeghier says that’s a reasonable way to do it.

Regardless of what the objects are, the Pentagon report concluded they do pose a safety threat to pilots.

So the report calls for extra training for military personnel. And a reporting system for when pilots encounter anything they can’t explain.