Moneybeat: The U.K. economic policy that pushed out the prime minister

WORLD Radio - Moneybeat: The U.K. economic policy that pushed out the prime minister 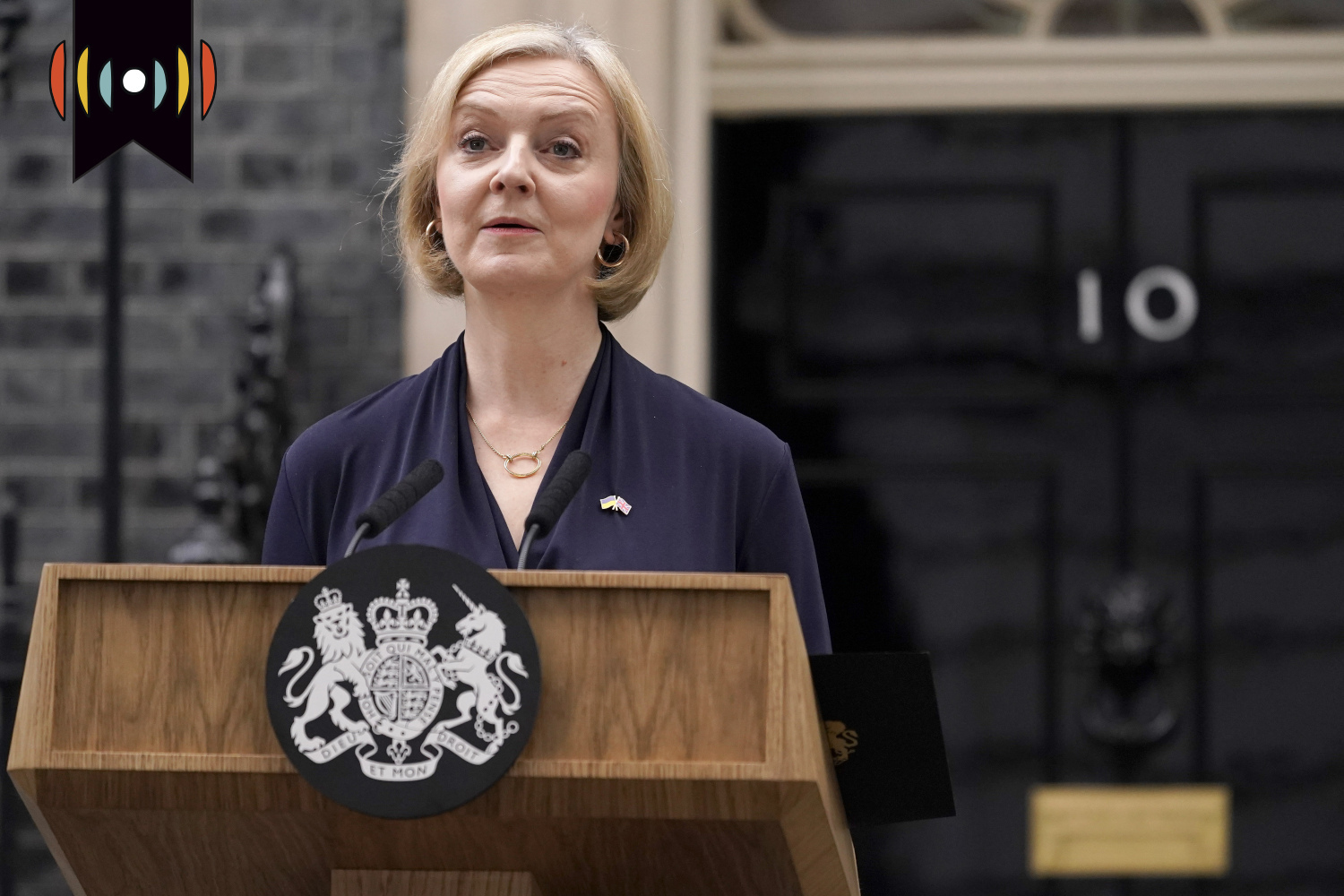 NICK EICHER, HOST: Time now for our weekly conversation on business, markets, and the economy. Financial analyst and adviser David Bahnsen is here.

He’s head of the wealth management firm The Bahnsen Group. David, I hope you’re doing well, good morning to you!

DAVID BAHNSEN, GUEST: Good morning, Nick. Good to be with you. Doin’ great!

EICHER: David, I want to get after listener questions ASAP, but before we do, I want to follow up from last week, our first questions had to do with Europe and one specifically on the UK. And, of course, since last week, we’ve had historic developments. Prime Minister Liz Truss became the shortest-serving PM ever and we can trace it to a poorly handled rollout of economic policy. But, ah, what happened?

BAHNSEN: Well, there's a couple of things that went wrong. I think that it's a really important reminder to conservatives, to I would say it should be a reminder to men and women of the Christian faith: when you have things you want to get done, and you believe you are right, you have an obligation to take seriously the way in which you do it, the line I'm very fond of is that piety is no substitute for technique. So to go in and say we're going to implement a certain economic policy, but not first go through the process of how financial markets are going to respond or not get a budget impact report, to say you want to do a big subsidy to people directly for their rising electricity bills, but then you also want to cut taxes, and you're not going to do analysis of the budget report, I think that the vast majority of what you wanted to do, would be in the end very good policies. But I don't believe that the right way to implement good policies is without incrementalism, or with, with a rush. There's a sense in which the technique has to matter as much as what you're trying to get done substantively. And when you look back to things because you're using an economic analogy here, with Truss’s attempted implementing economic policy, her mentor in English parliamentary history is Margaret Thatcher; [in] the United States, we had Ronald Reagan, but they took a long time to really build consensus, and to do the necessary pre-work to implement the cogent policy. And unfortunately, this backfired on Truss. And as you say, she's now in the history books for all the wrong reasons.

EICHER: All right, listener question time. Let’s begin with Ryan Jones of Bloomington, Indiana. He says he appreciates your analysis every week, David, and says he’s new to the world of investing.

JONES: … but it seems to me that by investing in a company, I may unintentionally incentivize the company to make decisions that prioritize growth of my investment over love of neighbor when those ideals may be at odds with one another. How would you advise someone who wants to responsibly invest their money in a way that does not incentivize growth of capital over love of neighbor?

Thank you, Ryan, and I should say, David, that we have received many questions similar to Ryan’s that touch on this subject of sort of ethical investing. For example Caleb Newsom, who is a seminary student. He wrote to ask your assessment of “Biblically responsible investing.” Specifically, he wants to know “how important is it that Christians avoid funds which have ties to companies that support abortion and other sinful practices”

What do you say?

BAHNSEN: This general topic is a very, very important one. It's one I've written about and lectured about all over the country and believe that the conversation needs to continue. But I want to start with a very important fact that could clean up some of the premises. When you invest in a company, you're not giving the money to the company. The company has already gotten their money. When they do a stock offering, they get money. And then when we go buy stock, we're buying in the secondary market. So Bob is buying stock from Paul and Paul is buying from Jenny and, and Jenny's buying from a mutual fund. You know, everyone is trading with one another, the money's not going straight to the company.

Now, perhaps someone feels that that's not relevant if you're still symbolically supporting what the company does. This is what I think the Apostle Paul meant by we're in the world and not of the world. There is inevitability of commercial touch with sin on this side of glory. And after the fall and before the second coming, this is unavoidable. The question is, what within Christian conscience and a Christian intentional desire to advance the kingdom is the right way to approach it? I believe that when you're talking about companies that are pursuing growth, they are pursuing the creation mandate, God asked us to cultivate the earth to grow. And then our task in creation is to extract the potential out of what God made. And so that company's doing things by providing goods and services that meet the needs of humanity, this is, in fact, even if one has no Christian epistemology, that they are effectively doing what God created mankind to do, and us supporting that commercially in the marketplace, I think is a good thing. But then when a company in the task of doing such begins getting distracted, supporting bad behavior, you have a better chance of influencing that behavior as a shareholder than you do as a non shareholder.

So that myself, guys like Jerry Boyer, there's a whole new project that is taken off out of the Alliance Defending Freedom, that is really seeking to hold companies accountable to stay focused on their objective, which is supposed to be creating shareholder value. You create shareholder value by what? By growing profits. You create profits by what? Producing goods and services that meet the needs of humanity. So I see these things as being very potentially looped together in a virtuous cycle. But along the way, I Romans 14 is still in effect - if someone's conscience doesn't allow them to own stock in a company, that I think that that's fine. But my own belief is that even when you go to a company that you think does good things, and then they are buying their products from a company that ships with a company that does bad things, that is simply the inevitability of this ‘invisible hand’, Nick, of the marketplace. So my view on it is meant to be more transformational. I want to own stock in companies, where we think they're doing a good thing for investors. But if they're doing a bad thing in society, we want to go reform that, we want to take dominion in the boardroom, take dominion in middle management and ultimately in the C suite. So there's a lot of stuff to unpack here. It's hard in our time constraint. But that's a kind of high level view of how I would approach this subject.

EICHER: Last batch that we have time for today, David. We’ve received lots of questions about mortgage interest rates. Jacob Roberts is very typical of those:

ROBERTS: My wife and I bought a house in December of last year when the rates were just above 3 percent, and now they are more than twice that. If we were to buy the same price house today, our mortgage payment would be almost 50% higher. That makes me not want to move for a very long time, and I'm sure that's true for many others as well!

Could we see the housing market stagnate in the future if people who locked in low rates become unwilling to sell? And second, do you think the market will correct itself for the artificially low rates we've had for over a decade? In other words, is it possible for higher mortgage rates to translate into lower home values?

BAHNSEN: Could we see the housing market stagnate in the future, if people who locked in low rates become unwilling to sell? And second, do you think the market will correct itself for the artificially low rates we've had for over a decade? In other words, is it possible for higher mortgage rates to translate into actually lower home values? Yeah, it's not just possible, it's inevitable, it is already happening. And I will argue it's a very good thing, when prices are distorted.

Think of it this way: if you are getting on a scale, and it's telling you a certain weight, and that weight is wrong, and then they fix the scale, and now your weight goes up because the scale is working. Is that a good thing or a bad thing to know the accurate weight, an artificially low interest rate created an artificially high value in houses. So to have them reprice around something more normal to the equilibrium of supply and demand to something more in line with wage growth, with with normal economic ratios of affordability relative to income, those are good things, I do believe that there will be a impact to housing prices, and one of those factors will be exactly what Jacob said, which is people that can afford to trade up and get a bigger and better home, that's always a certain percentage of housing market activity. And it won't happen when someone will be trading from a lower price home with a two and a half percent mortgage to a higher priced home at a six or 7% mortgage. Now, six or seven is still not that high in the grand scheme of things. It's incredibly high in the last 15 to 20 years. And I think rates will end up coming down when the Fed ends up having a kind of stasis in the Fed funds rate. But I don't know how much lower it'll go. I don't think it'll keep going higher. But again, somewhere in between what the low was a year and a half ago, which was a dramatic distortion of monies and so people who were able to buy at those low rates or refinance, they locked in something quite valuable. But to the extent that it was creating an artificial unaffordability of housing, I not only think it will adjust that, I think it should adjust that.

EICHER: All right, terrific batch of questions this week. Please keep your questions coming. One way or another, we will address all of them. And we’d be most grateful if you could record your question, in your voice, on your phone, and send us a file to feedback@worldandeverything.com.