Luthiers build stringed instruments like violins, cellos, and violas from start to finish 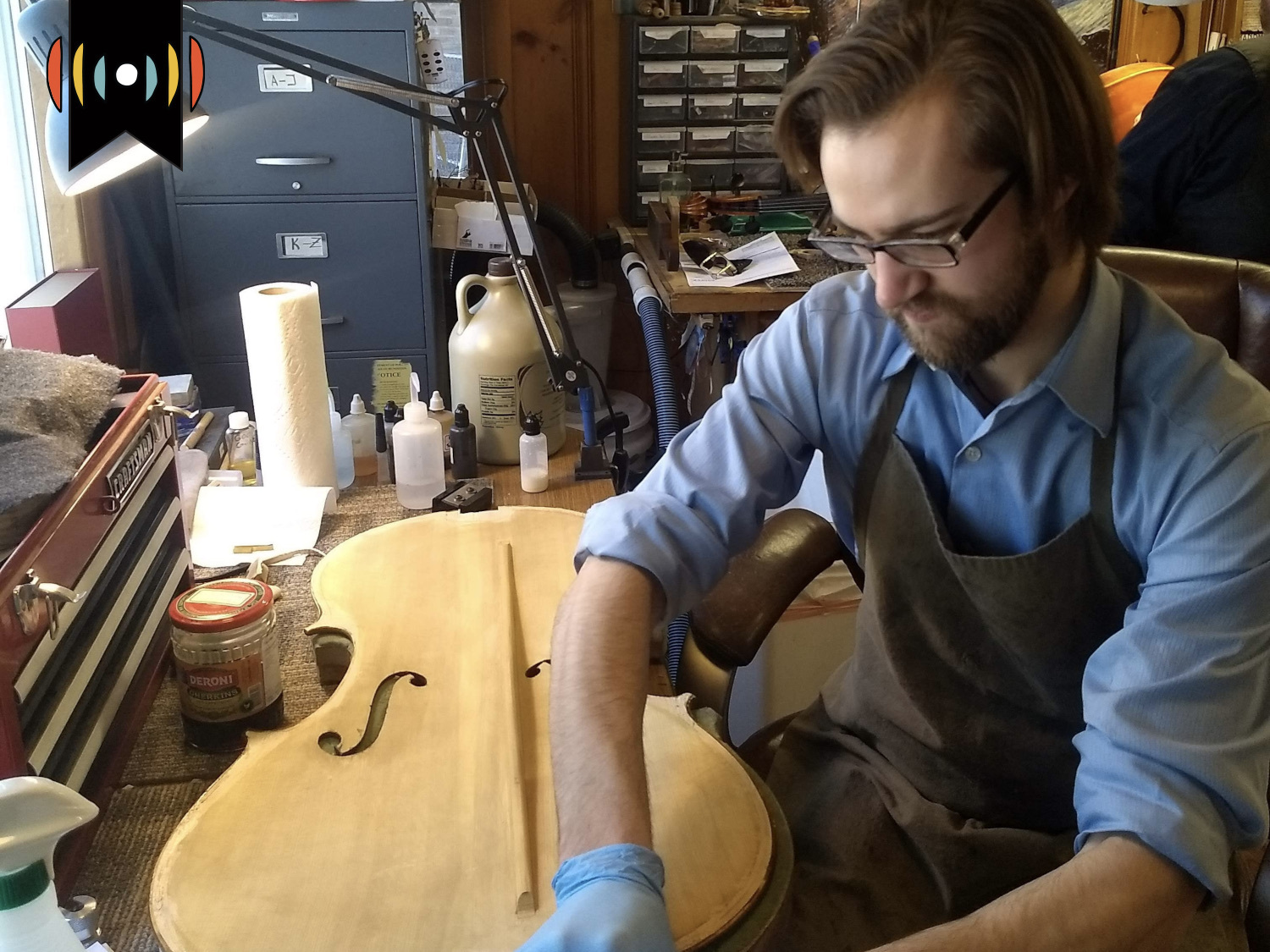 NICK EICHER, HOST: And I’m Nick Eicher. Coming next on The World and Everything in It: making violins from scratch.

It’s a profession that dates back hundreds of years. Luthiers build stringed instruments like violins, cellos, and violas from start to finish. But very few people take up the profession these days. WORLD’s Anna Johansen Brown introduces us to a young luthier setting up shop.

ANNA JOHANSEN BROWN, REPORTER: It’s a small, sunny workshop, paneled in yellow wood and smelling like varnish. On one wall, a dozen violins and violas hang, waiting for their finish to dry.

HADDON BROWN: So right here I am working on a new end button for this violin here.

Haddon Brown is sitting at a cluttered workbench, scraping away at a small wooden peg. He’s lanky and tall, wearing a canvas apron.

BROWN: The old one didn't fit very well so I'm fitting a new one and shaping it down with this peg shaper which it's a fancy pencil sharpener.

Brown is a young luthier, fresh out of school. He graduated from the Chicago School of Violin Making, then got a job here at Classic Violins in northern Illinois. Brown is a bit of an oddity here. He’s young, and he isn’t Bulgarian.

KOSTOV: Just came all the way from Bulgaria to come to the school.

This is Petio Kostov. He came to Chicago in 1994 to learn violin making.

There are only three traditional luthier schools in the United States, and only a handful of others worldwide.

BROWN: The end button, its main purpose is to hold the tailpiece in place…

Over at his workbench, Brown finishes shaving down the end button and fits it into the round hole at the base of the violin. It’s a simple repair for a minor problem. But other instruments need a little more intervention. Brown pulls out a cello or part of a cello. It’s just the front panel, a slightly curved sheet of pale wood with those distinctive curlicues cut into it. They’re called F holes.

The luthiers had to dismantle the cello to get at the inside. Brown takes it over to Kostov to get some advice.

BROWN: Do you want me to do anything to the glue surface? I mean, I lightly took up a plane and it didn't really remove much just glue it the way it is.

KOSTOV: The wood traditionally comes from Europe. It’s maple and spruce…harvested in the eastern slopes of the Alps...

The wood has to age for years before it’s dry enough to use. Sometimes it takes decades. The luthiers start with chunks of lumber, gradually shaping them down as they handcraft the body of each instrument.

Today, Kostov is scraping tiny flakes of wood off of a cello bridge. That’s the little arched piece that stands upright in the center of the instrument, holding the strings taut.

The bridge has a tiny heart shape cut in the center of it and two little circles on either side of that. It looks decorative. But Kostov says that design took hundreds of years to develop.

KOSTOV: There are different style cello bridges for example, this is called the French style more traditional and this is a Belgian style and you can see they're very different. The Belgian one gives more projection more power to the instrument. So this is a violin that I made and is varnished with a spirit varnish. [Plucking strings]

So far, Brown has built twelve instruments—a mix of violins, violas, and one cello. And he still remembers the very first violin he made start to finish.

BROWN: And hearing it played the very first time was very, very amazing and cool experience.

Brown still has a lot to learn about his craft. Varnishing is a particular thorn in his side. Sometimes he makes structural mistakes too.

BROWN: After I’ve carved after you've carved at the top, and you're, you know, gotten, you know, the perfect sort of curves and arches and you flip it around to remove and gouge out old material on the inside. I have, I have gone too thin. So I've had to take like a silk patch. And glue it to the inside of the wood as extra protection.

Brown says it takes lots of repetition and years of practice to hone those instincts.

Most of the work the luthiers do here is repair work. The shop is cluttered with brushes and sandpaper, small tools that look like surgical implements, and bottles of varnish and glue. Kostov pulls out a half-gallon jar filled with pale dried husks.

KOSTOV: This is a bladders, bladders from the Russian sturgeon fish and it's glue basically. So if you dip this in water. And if you heat it up, it will dissolve into will become liquid hide glue.

That’s the best kind of glue for strong instrument joints. And if the luthiers need to make a repair, they can just steam the glue so it comes apart again.

Sometimes, making violins is more art than science. A lot of it comes down to the luthier’s ability to read the wood.

KOSTOV: I think makers ability to, to choose to feel the woods and to make the right decisions at the right moments—how thick you have to leave the ribs, how high you have to make the arch, whether there is a recurve next to the to the edges—based on these decisions, the instrument will either sound good or not very good.