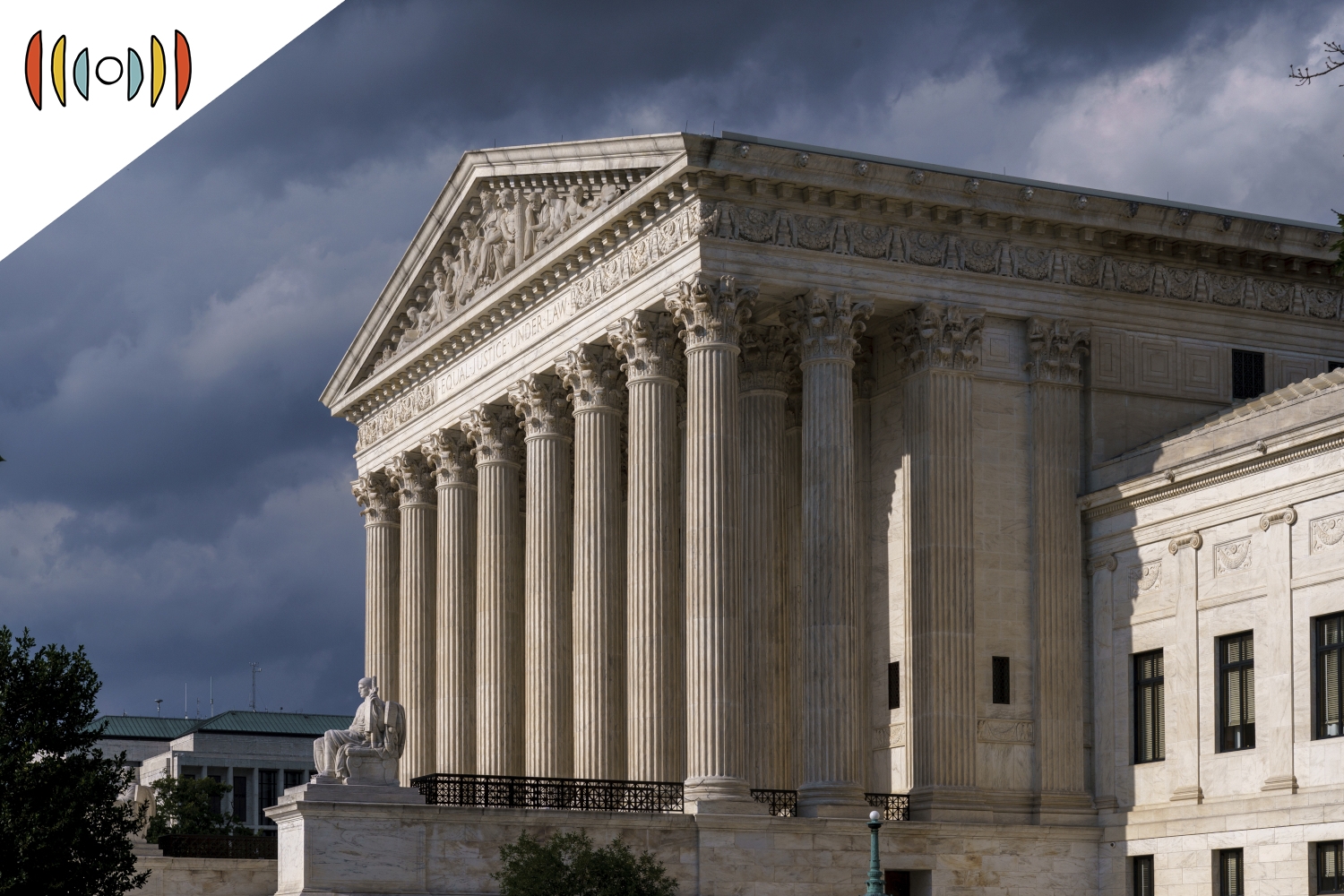 MARY REICHARD, HOST: It’s Monday, June 28th and this is The World and Everything in It. We’re so glad you’ve joined us today! Good morning. I’m Mary Reichard.

NICK EICHER, HOST: And I’m Nick Eicher. The U.S. Supreme Court handed down 10 opinions last week, and so Mary and I will bat those back and forth today.

First up, a unanimous ruling that protects the sanctity of the home.

Police have authority to pursue a felon into a home and they don’t need a warrant in such a case. But if the person they’re pursuing is merely suspected of a misdemeanor, police do need a warrant to enter a home.

In this Supreme Court case, a man driving along honking his horn and playing loud music caught the attention of an officer who followed him into his home and conducted a search.

You can hear the eventual ruling in this comment from Justice Stephen Breyer during oral argument:

BREYER: Well, here, if we take your view, then it seems like the home isn't the castle at all for the most trivial of things. I mean, it seems ridiculous when your home isn't your castle for terribly minor things.

As Justice Elena Kagan wrote in the opinion, “We are not eager—more the reverse—to print a new permission slip for entering the home without a warrant.” Police must consider whether the situation is an emergency or whether imminent harm to others is at hand before acting without a warrant.

EICHER: Next, a 6-3 victory for property rights in the case of union recruitment on farms.

California law orders agricultural businesses to allow union organizers to occupy their private property for the purpose of trying to recruit workers into the union.

Two businesses challenged the regulation, saying it violates the property-rights guarantees in the Fifth Amendment. It bars government from taking property without “just compensation” for the owners.

California defended the law, saying it limits the time given to union organizers to three hours a day for 120 days per year and because of that, it’s acceptable.

During oral argument, that didn’t seem to persuade Chief Justice John Roberts, as you hear in this exchange with the lawyer defending the law:

ROBERTS: But what do you do if there's more than one union that wants access? I mean, it's not -- it's not at all unusual for unions to be competing for representation. So does each union get its own 120 days?

Those parameters are not enough to justify the state taking away what the opinion called “one of the most treasured rights” of property ownership: the right to exclude people.

REICHARD: The court handed a narrow win in a class action suit against investment firm Goldman Sachs. Shareholders of the company alleged it committed securities fraud and cited general statements from the company such as “we are integrity” as a basis to sue.

The high court cut down the number of people in the class who suffered no concrete harm, and then remanded to lower court to determine whether stock prices were actually affected by general statements about the company’s character.

EICHER: The fourth opinion is another class-action matter that also cuts down the number of people in the case.

Here, thousands of people sought damages from a credit-reporting company called Transunion. They sued after finding out Transunion had flagged their names as matching those on a government list of suspected terrorists.

But in a 5-4 decision, the majority said that around 6,000 of these people in the class suffered no concrete injury, so they have no standing to sue. That left about 1,800 certified as having suffered concrete injury and so they may proceed.

Chief Justice Roberts illustrated this point during oral argument. He imagined a law that provides for damages to anyone driving within a quarter mile of a drunk driver:

ROBERTS: What is the concrete injury in my hypothetical? You were exposed to risk, but you didn’t know it, and by the time you found out about it, you weren’t.

In other words: No harm, no foul.

REICHARD: Fifth opinion: the court in a 6-3 ruling allows more time for small refineries to be exempt from requirements that more ethanol be mixed with their products.

The Clean Air Act required biofuel quotas in gas products to reduce American dependence on foreign oil. The corn and oil industries have been locked in dispute over disparate application of that law.

EICHER: Number six: a win for Alaska Native Corporations that had sought some of the $8 billion in Covid relief from the CARES Act. That’s the initial stimulus package of 2020: The Coronavirus Aid, Relief, and Economic Security Act.

Native tribes mainly in the lower 48 states argued that these for-profit corporations are not federally recognized as a tribe, so that money should not be distributed to them.

It came down to what the CARES Act means by the phrase: “recognized governing bodies of Indian Tribes.”

By a vote of 6 justices to 3, the court held those for-profits do qualify as tribes and are therefore entitled to a share of the money.

REICHARD: Opinion 7 of 10 total today: This one is a mostly unanimous win for the separation of powers. Many dissents and concurrences.

The core issue was whether the president is free to remove the director of the agency that oversees the federal home loan mortgage corporations Freddie Mac and Fannie Mae for reasons other than the restrictive “for cause.”

That’s a big deal, because the constitution gives wide latitude to the executive branch to remove agency heads for any reason, not just for cause.

The court struck down that “only for cause” language.

And the same day this opinion was handed down, President Biden fired the director of the Federal Housing Finance Agency.

EICHER: I’ll ask David Bahnsen about the economic meaning of that decision here in just a few minutes.

Our next case, number eight, was an 8-to-1 free-speech case.

Here, the court backed the teenager who posted a vulgar statement on social media directed at her school. She was angry because she didn’t make the varsity cheerleading squad.

In response, the school suspended her from the junior varsity squad for a year. Her family sued alleging violation of her right to free speech. The majority agreed, reasoning that off-campus speech is in the realm of parental authority rather than school control.

The ruling is not all-encompassing, though. Bullying, harassment, and threats are still subject to the school’s authority to punish.

REICHARD: Penultimate ruling here, the ninth, on whether the US Patent and Trademark Office judges are improperly appointed. The answer is yes in a 5-4 ruling, because these judges are not nominated by the president and confirmed by the Senate as required by the Constitution’s Appointments Clause.

This case is now remanded on the question of how to fix the procedures of the patent and trademark office.

EICHER: OK, here’s the tenth one. You may have heard about it. A unanimous decision that made headlines: all nine justices say that the NCAA—the National Collegiate Athletic Association—violated antitrust laws by prohibiting certain compensation to student athletes.

They still won’t be paid directly in cash; this opinion only applies to a narrow subset of NCAA rules about education-related expenses. Things like free tutoring, musical instruments, and laptops.

The justices obliterated the NCAA’s argument that to pay these particular expenses is to change the nature of the sport from amateur to professional and that that ought to be enough to shield the association from running afoul of antitrust laws. You could hear that in Justice Brett Kavanaugh’s comment from oral argument:

KAVANAUGH: I start from the idea that the antitrust laws should not be a cover for exploitation of the student-athletes, so that is a concern, an overarching concern here.

REICHARD: I’ll add that he took that idea right over into his concurring opinion. He practically invites more litigation to further dismantle the NCAA’s grip on college sports.

I’ll quote from it:

“The NCAA’s business model would be flatly illegal in almost any other industry in America. All of the restaurants in a region cannot come together to cut cooks’ wages on the theory that ‘customers prefer’ to eat food from low-paid cooks … Movie studios cannot collude to slash benefits to camera crews to kindle a ‘spirit of amateurism’ in Hollywood. Price-fixing labor is price-fixing labor... under ordinary principles of antitrust law, it is not evident why college sports should be any different. The NCAA is not above the law.”

Please rewrite/add highlights for this article so it easy to see the 10 ruling as I skim thru it to see which ones I want to read.

In the future you should USE BOLD numbers to tell me #1, #2 etc. so I can quickly skim thru it to pick out the ones I want more info about. Go to Kiplinger to see how they highlight their 10 topics so its easier to skim. You lost me after the "Lets get started"...