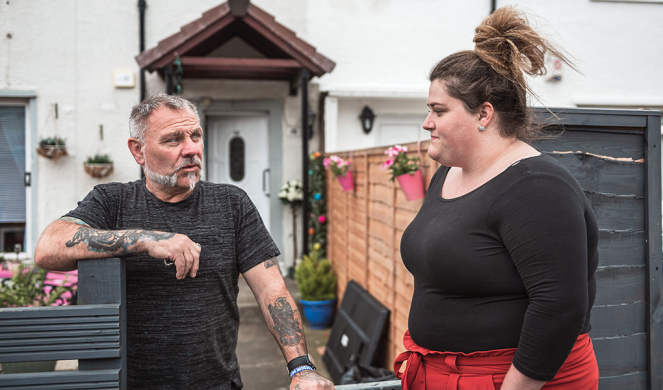 MARY REICHARD, HOST: And I’m Mary Reichard. Coming next on The World and Everything in It: the Hope Awards for Effective Compassion, part three.

This time, we highlight our international winner: “20schemes” — a ministry quietly serving in government housing projects outside Glasgow, Scotland. WORLD Radio’s Susan Olasky has our story.

SUSAN OLASKY, REPORTER: From downtown Glasgow, Scotland, it’s only 15 minutes by train to reach Garrowhill, a station six miles to the east.

AUDIO: We are now approaching…

The walk goes past a soccer field. Past semi-detached homes and multi-story apartment buildings. Past bicycles chained to bright blue iron porch railings. Past playgrounds, schools, and a community center.

SELBY: They’ve known each other since they were kids. So they’ve lived here for 40 or 50 or 60 years. Usually they get a home and they didn’t move from it. There’s not a lot of moving around.

Carrie Selby is definitely an outsider to the scheme. She’s a Texan who came to help plant a church in Barlanark. At first, her presence confused local residents.

SELBY: Their first question is why are you here?

SELBY: When I first told them I was here to plant a church, they didn’t understand what plant a church meant. So I learned to say to start a church because there wasn’t a church here when we started.

A ministry called 20schemes hopes to change that. So far the group has planted  churches in six schemes, including Barlanark. The work is hard.

STEWART: There’s not a lot of people battering down our doors and wanting to come and find out about Jesus.

Pete Stewart has served in Barlanark for 10 years. Since 20-15 he’s been one of the church planting pastors for 20schemes.

Stewart is from Belfast originally. He says the scheme reminds him of home.

STEWART: The kind of like rawness. We often say that the kind of people that might stab you but then take you to the hospital afterwards. So it’s like that kind of raw, kind of aggression—don’t mess with them—but actually underneath very loving, caring, community-minded people.

Forty-five miles to the east of Barlanark is Gracemount. It’s a scheme on the outskirts of Edinburgh where Andy Prime serves as pastor. He owns his house in the scheme.

PRIME: We’ve got it very cheap. It was repossessed after the former owner was killed in a drug bust. It meant the house was empty for two years with a teenage daughter breaking in every weekend for house parties. So things like the door are still a little bit temperamental.

As he walks, Prime talks about his wife, Sarah. She and her brother founded a basketball club and Bible ministry in Gracemount about 14 years ago. Then they bought a house and moved into the scheme. At first, the local people were suspicious.

PRIME: And so they had windows smashed. And it took about a year for them to gain the trust of the local community.

But gradually, Sarah and her brother earned the community’s trust. So much so that when she married Andy and moved into his apartment in central Edinburgh, a child from the scheme worried about her.

PRIME: This is a kid whose dad was kinda one of the drug dealers in the area. The little boy asked where Sarah was moving to and she told him. And then the boy ran back to her the next day and said, ‘You can’t move there. My dad doesn’t know anyone there. He can’t protect you.’ So unknown to her she’d had this kind of wall of trust, this wall of protection because of the kids that she was looking after and who their parents were.

Like people in all the schemes, many Gracemount residents are unemployed. They live on government benefits and shop at neighborhood stores.

People in the schemes are often poor, but they lack hope more than money. Widespread drug use is one symptom of that hopelessness.

PRIME: Now when young mom has baby, mom is an addict, and granny is often an addict. It’s quite overwhelming.

20schemes starts with gospel-preaching churches that offer the hope these neighbors lack. The gospel spreads neighbor to neighbor, through church cafes and walking groups. Parenting groups and Bible studies.

PRIME: The discipleship thing is more than just a transfer of information. It’s teaching people how to live the whole of their lives in a manner worthy of the Lord Jesus Christ.

Natasha Davidson grew up in Niddrie, another scheme outside Edinburgh.

DAVIDSON: Everyone knew each other. You never had to lock your doors or worry about anything else but part of that was crime. The people committing the crimes never done it to their own people so they always done it to strangers. So you were safe.

She first met Christians at a cafe sponsored by Niddrie Community Church. During the next year-and-a-half, she resisted becoming a Christian. When she finally did seven years ago, some people viewed it as betrayal.

The church became Natasha’s new family. Mature Christians discipled her. She now works with children’s and family ministries at the church. Those who knew her before see that she’s changed.

DAVIDSON: They get to ask you what is this change? And so you get to share so openly because actually the only change in me is Jesus. It’s been purely Jesus in my life. And then the work of the Holy Spirit.

Back in Barlanark, church volunteers wait for kids to arrive for a weekly, after school Bible club.

The 20 elementary-aged participants are rambunctious.

Until the singing starts.

Giving hope that the gospel is bearing fruit in this scheme and others throughout Scotland.

For WORLD Radio, I’m Susan Olasky reporting from the schemes of Scotland.

(Photo/Susan Olasky) Natasha Davidson (right) talks with a resident of the Niddrie scheme.