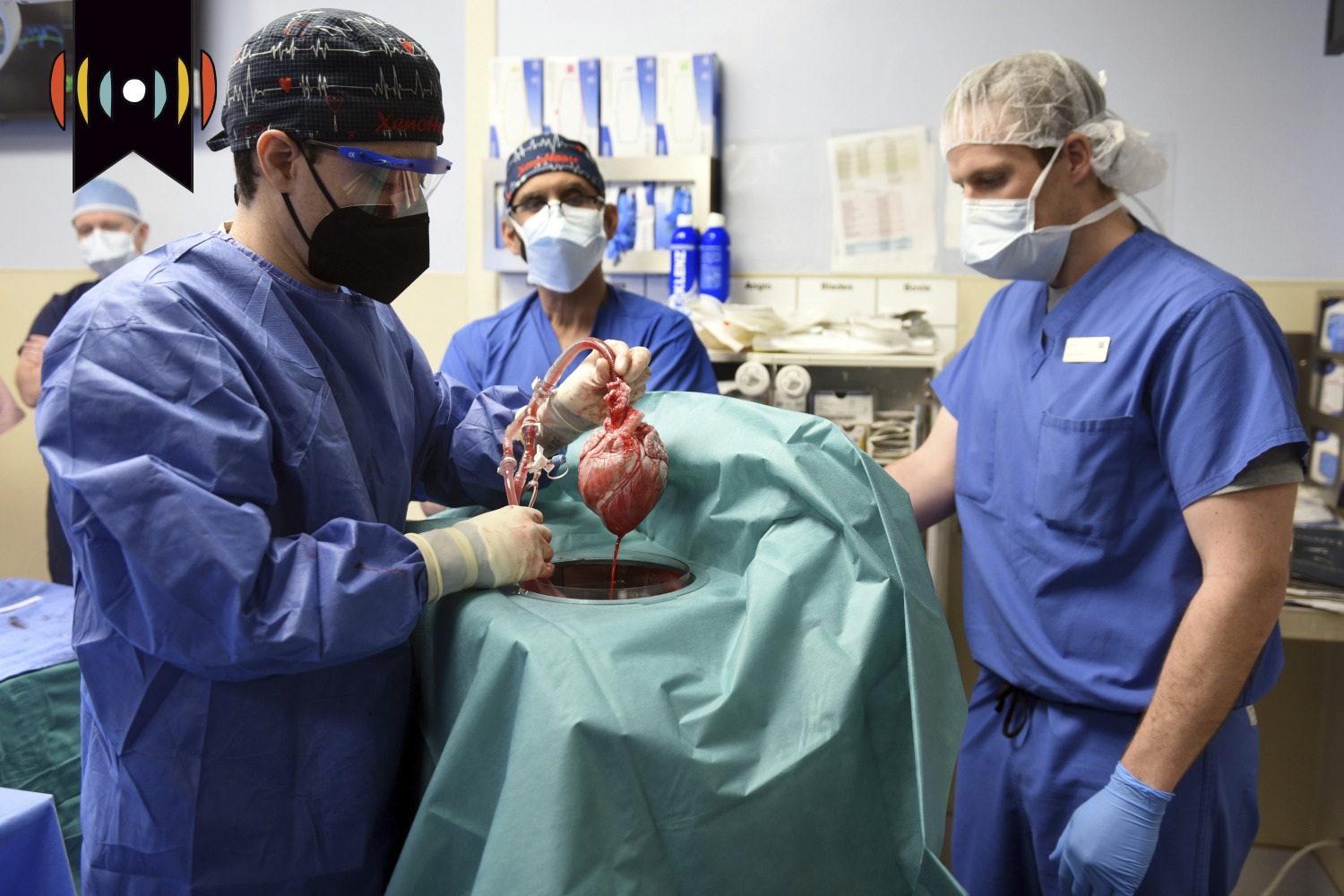 MYRNA BROWN, HOST: It’s Friday, January 14th, 2022. Glad to have you along for today’s edition of The World and Everything in It. Good morning, I’m Myrna Brown.

EICHER: So, this week we learned of a scientific first, a heart transplant using a pig heart to replace the failing heart of a 57-year-old. The story is that the man was suffering from terminal heart disease. He was not eligible for a human heart transplant and his time was running short, so under a “compassionate use” emergency authorization from the government, he was able to have the surgery and thus we have another “first-ever” in the field of medicine.

A colleague of mine here at WORLD made a helpful comment—she’s the editor who oversees our daily news email we call “The Sift.” Lynde Langdon recalled for her readers that one of her first responsibilities here at WORLD years ago was writing about questions of medical ethics and so in announcing this news this week, she made the observation—and I’ll quote her—“As you read about this medical breakthrough and others, be wary of stories that shout, ‘We can do it!’ without asking, ‘Should we do it?’”

Not suggesting an answer necessarily, but our Opinions editor Albert Mohler had a piece that said the same. We need to ask the question “should”? Mohler wrote:

“[T]he perils of unrestrained technology and unprincipled medicine are frightful. There are serious moral and worldview issues to be addressed with this new procedure,” he writes, but doesn’t see a categorical reason theologically to reject it.

So here we are—as a culture—are we even equipped ethically for all the breakthroughs science might offer us?

STONESTREET: We're not equipped ethically for the breakthrough science that's already happened, much less where we're going. I mean, you can kind of think already about questions about doctor assisted suicide, questions about whether unborn children deserve the same protection as those outside of the womb. I mean, obviously, ethically we're not thinking about these things well, and it's not just that we're coming up with the wrong conclusions. It’s that we're bringing the wrong framework to bear.

Science has largely been driven with an ethical justification that if we can do it, therefore we ought to do it. And that is a terrible place to be.

Now look, Dr. Mohler’s, right, there's not a categorical reason to reject necessarily using animal organs, animal parts in humans, we already do it and many ways. In other words, before we implanted a pig heart into this gentleman, we've been doing pig heart valves for a long time, muscle tissue. A friend of mine in college had her ACL repaired. This is back when they didn't know how to repair ACLs. And they were trying everything. And she got, you know, a rebuilt ACL from the cadaver of a cow. I mean, it was just really amazing.

But again what's driving this is very limited. I'll give you one example. The promise that came with this new story was that we have got a shortage of organs for donation. Now, let me just trace the history here, because it tells you everything you need to know. I'm not opposed to organ donation. But organ donation is brand new. Organ donation came with the promise that now people would be able to get a second chance at life. It became an opportunity for a select few, with an incredible breakthrough. Now, whenever we hear about organ transplantation in the organ donor waiting list, it's now a crisis. Now, what needs to happen for this crisis to be averted: People need to die so that we can take their organs and given them this. Do you see the ethical complicity here? I mean, it's just really an amazing thing.

The issue is that so often in these technologies, the promise becomes an expectation and the expectation becomes a right. And it's essentially a purely pragmatic way. If good things can come out of it. Therefore the action itself is justified. What's not playing a role here is anything in terms of ontological ethics, that the practice itself is an ethical practice, what's not in the conversation at all, is the uniqueness of the human person, that every person is made in the image of God. And that humans aren't just mere animals. You know, that sort of framing is absolutely required to prevent abuses, particularly to human rights. So I agree, I don't see anything ethically problematic. But look, we do not have the ethical framing for the technology, our technology has so outpaced our ethics, you can't even see it from here.

BROWN: John, I’ve heard you say more than once on this program, parents do your homework when college hunting with your kids! And I would add, you might also want to be sure you’re reading WORLD reporter Leah Savas’ weekly newsletter. It’s called Vitals.

This week she’s calling attention to a recent report revealing the connections 69 schools in this country with some brand of Christian confession share with Planned Parenthood.

It’s an astonishing article, pointing to schools like Baylor University, a Baptist school in Waco, Texas, the University of Notre Dame and St. John’s University, both Catholic Institutions, listing Planned Parenthood as a health resource for students or as a student-internship or student-volunteer opportunity. Some schools have allowed the abortion business to exhibit at career fairs. To my understanding, these universities aren’t being accused of actively promoting abortion, but the lack of clarity in their stance might be just as harmful. What do you think?

STONESTREET: Well yeah, I agree, I think it's very problematic. I think it's problematic not just because there is a partnership, but because what this organization is being described at is not accurate, and it's a healthcare provider, you know, a place where you can actually, you know, go volunteer. That is a problem. And it does, I think, point to the level at which parents do need to investigate the colleges that their kids choose. Now, look, all the schools that you mentioned are schools that are very good at a lot of things, Baylor, for example, their men's basketball team is really good. But I mean, even so, they have wonderful scholars, they have people on the faculty that would be just as alarmed by this partnership as we are.

The problem is there are so many degrees by which a college that claims to be Christian can compromise. And I think it's a radically different thing, whether a college claims to abide by Christian values or whether it doesn't, because then you know whether you're going to get an honest education, I think, you know, and it goes deeper than this, you know, for a school that doesn't have a relationship with Planned Parenthood, but has pro abortion faculty teaching in their psychology departments or their, you know, feminist scholars, that cloak kind of a pro abortion, second wave feminism in the guise of Christian language. Those in my mind, by the way, are the most dangerous, those that teach lies and call it the truth. Also, I think there's just, you know, in a pragmatic sense, schools that are so committed to running away from any sort of conservative Christian identity, or even a Christian identity overall, are schools that are going to be talking about it all the time. And if you're talking about it all the time, then you're missing out on all the things that really matter in life. You know, in other words, I think a lot of Christian education, and I put Christian there in quotes, is wasted on conversations about things that get in the way of actually giving a kid a real education. And so all these things have to be factored in. It's not just like, I don't want my kids to hear things that aren't true. If you know they're going into an environment where these various ideas are explored. That's one thing. If you're being told something else, and they're getting these ideas under the guise of Christian teaching, that's a deception. And if you're wasting a ton of time fighting really silly battles, then you're not actually getting a real education. So there's the deception angle, and then there's the stewardship angle. Do I really want to spend my money on something that's not going to be as good of an education as I might get elsewhere.