Plus: what Congress is getting set to do on marriage

Crosses stand at a makeshift memorial for the victims of a mass shooting over the weekend at a gay nightclub Wednesday, Nov. 23, 2022, in Colorado Springs, Colo. Associated Press Photo/David Zalubowski 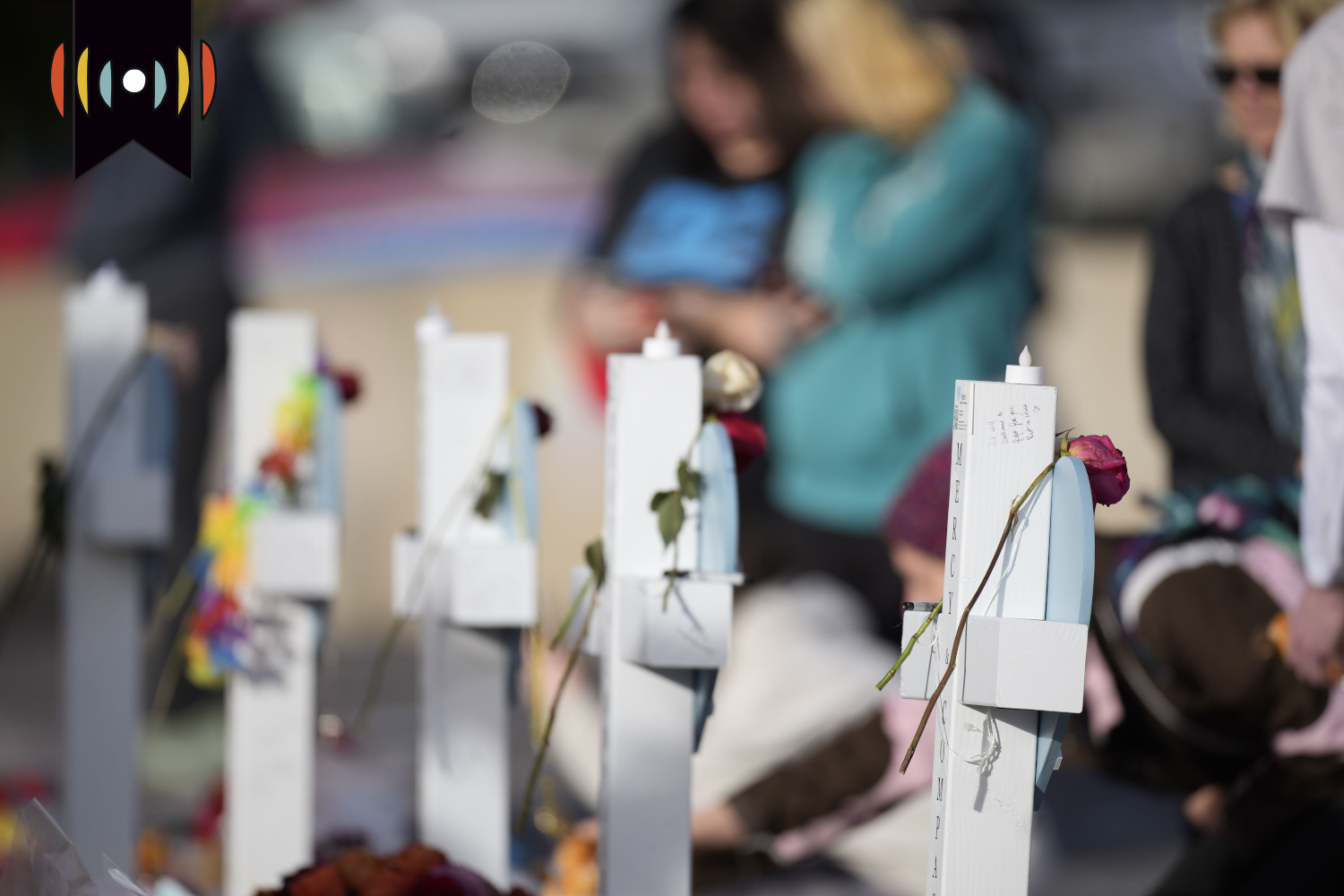 Joining us now is John Stonestreet, president of the Colson Center and host of the Breakpoint podcast.

Morning, John. Hope you had a wonderful Thanksgiving!

JOHN STONESTREET, GUEST: Thanks. I hope you both had a great Thanksgiving as well. Thank you.

EICHER: Yeah, it was a terrific day, yeah. But heavy hearts across the land, too, John, with news of mass shootings. There was the nightclub attack right there in your hometown of Colorado Springs, the Q Club, five people killed there.

Then in Chesapeake, Virginia, six people killed, including a 16-year-old, a WalMart manager went into the breakroom and—as one witness said—just started spraying bullets.

Ten days before that, and just 20 miles away at the University of Virginia, a student is accused of shooting three fellow students to death.

And in the aftermath, the commentary follows a pretty predictable pattern. John, what are we missing on these mass shootings? Where is the analysis consistently getting it wrong?

STONESTREET: Well, I think one thing is, is we can stop blaming Ron DeSantis and Tucker Carlson for being loosely connected with this. As details continued to emerge on the shooter in Colorado Springs, we hear the narratives that we all kind of default to immediately fall down. The person who stopped this shooter was an example of the kind of masculinity that many people call toxic. It tells you that you we still need that sort of heroism, particularly in a world that’s broken and fallen like ours. The narrative that this is somehow fueled by LGBTQ hate isn’t making as much sense now when the shooter self identifies as non-binary and goes by a set of preferred pronouns. We all tend to punt to our own narratives and try to superimpose that on something that clearly is a result of brokenness in our society.

It is emerging that this particular shooter in Colorado Springs is a young man who threatened to do a mass shooting years ago, and we had a problem of policing with him. The commonalities here are that young men in America are not doing well at large. The most extreme and evil expression of that crisis are these acts of mass violence. But when you talk about these kinds of twin categories of deaths of despair, and acts of desperation, they’re rooted in the fact that young men have an identity crisis. Almost all the time, they’re dealing with family brokenness and the absence of a father figure. I hope now we’ve actually gotten around to what we’re facing: A cultural epidemic of brokenness, that has to do with the loss of family and the loss of meaning. If we target those two things, the loss of family and the loss of meaning, I think we’re going to see a dramatic reversal in how frequently these mass shootings occur, and also in all the other kinds of social ills that we’re seeing.

EICHER: Family breakdown, John, I think we need to talk about that, because it leads to the other topic I wanted to bring up and that’s respect for marriage at the policy level.

Specifically, let’s talk about what happened last week in the U.S. Senate, when 12 Republican senators cast an all-important procedural vote to set the table eventually to enshrine Obergefell marriage into federal law.

I’m trying out that moniker, Obergefell marriage, because it refers to the Supreme Court case Obergefell v. Hodges from 2015 that ordered states to issue marriage licenses to same-sex couples. We hear the term “gay marriage,” but I think to be accurate, maybe “Obergefell marriage” is more precise.

Issue one is that set of provisions: I don’t know where you come down on those. Do you think they’re a reasonable compromise? Were the 12 Republicans right?

STONESTREET: No, they weren’t, not any more than the level to which the Supreme Court has acted to protect religion. It’s just liberty. And I think even those people who are defending these religious liberty protections as being sufficient almost always go back and say all the ways that the court has supported religious liberty—and the court has supported religious liberty—but the court has not extended those protections, particularly in areas of sexuality and same sex marriage, to speech and to private businesses. So we’re back to this kind of shriveled up definition of religious liberty, which says that we all have the right to believe what we want in our own hearts, our own homes, our own houses of worship, and in our own heads. But that’s not sufficient to protect the Jack Phillips, the Baronelle Stutzmans, and the Laurie Smiths of the world. That’s why they’re still litigating, now, after all these years.

People point to the fact that there are protections for religious institutions like Christian colleges, but what does that mean? It has protections that they don’t have to force a boy into a girl’s dorm, or dress out a biological male on the women’s basketball team, but it doesn’t do anything to protect certifications and accreditations, and what we’ve seen over the last couple of weeks is there’s a number of Christian colleges that can’t wait to change their minds on this anyway. And that’s where I want to get to on your question. These 12 Republican senators did not support this bill, because they thought it had sufficient religious liberty protections. They’re using that to justify the ultimate reason they supported this bill, and that is because they either support same sex marriage. or because they think it’s an electoral liability not to support same sex marriage and they’re ready to move on.

How they’re moving on is with a another branch of the US government saying something that’s not true: That marriage is what we make it like that we can take any institution or any relational arrangement we want and stamp the label of marriage on it on it. And then it’s marriage because we call it that, and it’ll have all the benefits and privileges of marriage.

That’s like saying, “the Rockefellers are rich, I’m gonna change my name to Rockefeller, so I can be rich too.” That’s not the way reality works if marriage is a legitimate institutiton. Also, this doesn’t do anything to protect children. I’m grateful for the voice of people like Katie Faust, who are pointing this out. You don’t want your government to promote something that’s not true, and you definitely don’t want your government to do that in such a way that it actually compromises children.

BROWN: Issue two on this is the idea of making peace with Obergefell marriage. The argument goes: you know, we’ve had this for seven years now and it’s time to move on.

We hear commentators like David French saying that same-sex couples have a “deep reliance” on Obergefell. He says they have “formed families” and that to reverse that “legal superstructure” would be “profoundly … unjust.”

So how do you rate that argument, that what the Supreme Court has joined together, let Congress not separate?

Is that a legit Christian view?

STONESTREET: That’s a great way of putting it: what the Supreme Court has joined together let Congress not separate. Absolutely not. Just because the Supreme Court called something marriage doesn’t mean that it is; because the Supreme Court has called something family doesn’t mean that it is. The prevailing narrative is that Obergefell enables same sex couples to form families. No, they formed relational arrangements and called them families. That’s not forming families. And that’s not something we can actually endorse, particularly when the lives and well-being of children are at risk.

We had the Secretary of Transportation this year after adopting children. He and his partner laid on a hospital bed as if one of them had just given birth, and celebrated the “forming of families.” At least at that point, the issue was adoption; the number of same sex couples who have now done this by hiring surrogates and promoting advancements in artificial reproduction that treat babies as commodities and rob them of their biological mom and dad, pretending as if the mom doesn’t exist while she’s the one that was actually in the hospital bed because she needed to be after going through that. In other words, we’re making people disappear. We’re taking children’s rights completely out of the picture. 100% this law did not form families.

This law did not allow people to form families unless you think the family is something that we create and whatever relational arrangement we justify. Relational arrangements in our particular social moment don’t magically becomes families because we use that nomenclature. That is just not the way reality works. And that’s certainly not the way a Christian view of reality works, which begins with the idea of a creator creating the world in particular ways, giving us created givens. Jesus pointed to that, when he was asked about how to handle relational arrangements in his day. He pointed back to the fact that there was actually something to being male or female: That what God has joined together, let not man separate. What God joined together was moms and kids. What Obergefell does is separate those two. So that is unjust for children. If the law is unjust, removing it is the right thing to do.

BROWN: John Stonestreet is president of the Colson Center and host of the Breakpoint podcast … John, we’re so thankful for you!

STONESTREET: Well, thank you. I'm thankful to be here every week, almost every week.