Transgender ideology will eventually collide with immutable and undeniable facts

In this Feb. 25, 2021, file photo, Rachel Levine, nominated to be an assistant secretary at the Department of Health and Human Services, testifies before the Senate Health, Education, Labor, and Pensions committee on Capitol Hill in Washington. Caroline Brehman/Pool via Associated Press 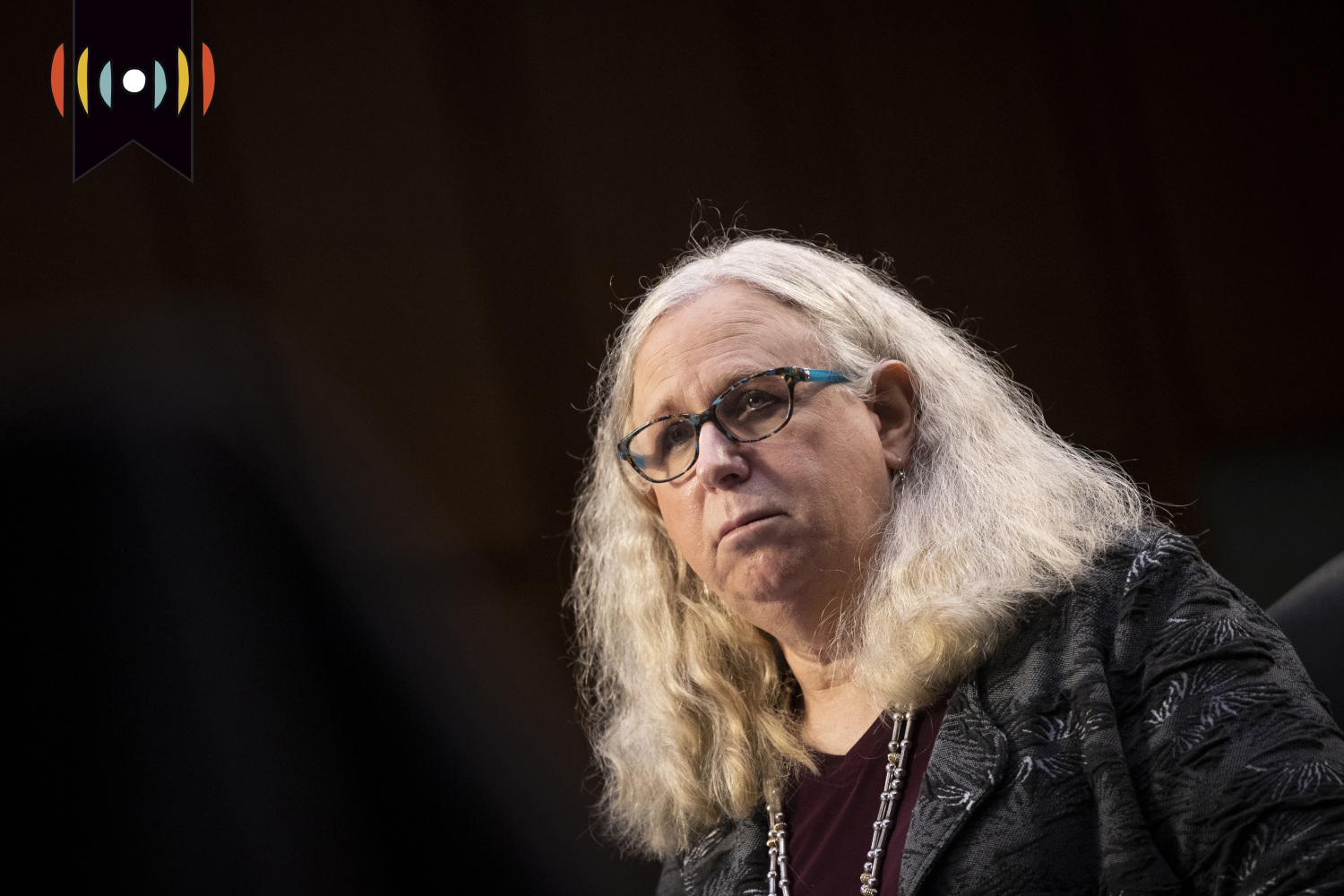 I want to welcome John Stonestreet, the president of the Colson Center and host of the Breakpoint podcast.

EICHER: I found this out from you, John, that—and I’m quoting here—“the surgeon general this week named the first female four-star officer to serve in the U.S. Public Health Service Commissioned Corps” only to go on and read a little closer and find out the surgeon general was talking about the health secretary, Dr. Rachel Levine, who is transgender, and that in naming Dr. Levine to this post, he was positioning the move as a step forward for women.

But all of that that reminded me of the big dustup in recent days over the comedian Dave Chappelle, who got Netflix in trouble for his provocative statements on transgenderism, and the highly popular podcaster Joe Rogan stirring up trouble for interviewing transgender skeptics—people like Abigail Schrier.

I wonder about these two sort of mainstream voices—not Christians at all—and wonder whether there’s coming a wider cultural pushback. What do you think?

STONESTREET: I think we're running into a number of things.

And, there’s a third to that you didn't name which is Margaret Atwood, believe it or not, who said something that got her labeled a TERF, which stands for trans-exclusionary radical feminist. Who says people don't learn things from The World and Everything in It, and there you go, a new acronym that everyone needs to know. But Margaret Atwood, who of course, is really famous for giving us women protesting abortion regulations, dressed like Puritans because of the show The Handmaid’s Tale, you know, showed some concern about the transgender movement canceling women.

Which of course, the entire appointment, and the tweet from the Surgeon General, illustrated, you know, this way, he's the only female and notice he didn't say, woman, he said, female that's a biological term, and talked about this man, being a female, celebrating female, and there's not a female in the picture, maybe not a female in the room and the ceremony. Now my point here is, is if there is a wider cultural pushback, it's going to come by basically hitting the limits of reality. There's only so much you can bend things in the real world because they reflect what actually is, to quote Dallas Willard: you can't step off the roof and then choose not to hit the ground. Gravity's not that pliable. And that's the same thing here.

You just can't continue to treat aspects of reality as if male and female don't exist, because they actually do exist. And you're gonna continue to run into reality. So I think we're gonna see that. And let me also say this, particularly out of this story of Dave Chappelle, and Margaret Atwood, who have no moral or theological reasons to raise their voice, and so many Christians and Christian leaders and Christian pastors can't bring themselves to speak out against this. And here you have Dave Chappelle doing it. Dave Chappelle willing to say what is true, or maybe a more accurate thing, unwilling to say what is not true? And maybe we can learn the lesson.

EICHER: Here’s another trend story: Walgreens shut down five more stores in San Francisco and according to Jason Riley in The Wall Street Journal, the number is now 22 stores closed and Walgreens is not alone. “Much of this lawlessness,” he writes, “can be linked to … a … ballot initiative … under which theft of less than $950 … is treated as a nonviolent misdemeanor and rarely prosecuted.” He goes on to say California has decriminalized shoplifting and is now getting more of it.

Now, your organization’s namesake—Chuck Colson—was very much a prison reformer, but do you wonder whether the current trends are going too far and the law-abiding are the ones paying the price with higher criminality in their neighborhoods and business activity packing up and moving out?

STONESTREET: No, I don't wonder that at all. It's obviously true. I mean, the trends are headed in this direction. And to be clear, Chuck Colson wanted to reform prisons, but not basically to go from tough on crime to light on crime. He didn't believe that at all. I can't tell you how many times I heard Chuck Colson thoroughly critique the dominant narratives about crime and the rise and crime and the rise in the prison population or treating crime as if there are two parties involved: the state and the perpetrator and the perpetrator offends the state. And that's often what happens in an era of big government.

And that's, of course, the mindset you see behind the San Francisco policy, which basically says, Well, the only person that's really going to pay the price is California, we don't want to really pay that price. That's why it's a misdemeanor. And you know what, we're not going to prosecute it, because we don't have enough resources to go around.

And for the record, it's also not the right kind of framework that San Francisco applied when they shut down the In and Out Burger. I don't know if you saw this story, Nick, for failing to police vaccine cards of their customers as they walked in, because you know, that's what In and Out should be doing.

First, from Alabama, my home state, which banned the teaching of critical race theory in the public schools, this was a move of the state board of education.

And second, a radical high-school teacher in California who was too radical for California. He thought his job was to turn students into revolutionaries and he made no bones about that. But after he was suspended, a local parent made the comment: “unless it’s private school, morals, values and political views aren't welcomed in public education.

I think I understand where the parent is coming from, but aren’t we fooling ourselves if we think education without morals, values and political views is possible?

STONESTREET: Oh, yeah, absolutely. I appreciate what this mom said, I looked at this story closely. I mean, this was a radical high school teacher. He wasn't holding back at any level. And I get any parent that says, I don't want those values. In my school, I don't want my kid to be under the influence of somebody with those values. That's not what education is about.

But it is a misnomer to think that there is such a thing as education, without morals without values. This is actually something that C.S. Lewis wrote about years ago, I think Men Without Chests, which is the opening essay in The Abolition of Man, is so profoundly helpful, even today. Because what Lewis talks about is the an educational system that fills kids heads with facts and their bellies with passion, but does nothing to cultivate the moral imagination. And of course, we could see that that is exactly what's happening today.

We're coming out of this, follow the science trust the science, here's the education, you know, kind of an educational snobbery that has defined elite education on one hand, you might say, filling heads with facts. And then of course, the the educational approach that is behind advancing things like critical race theory, or critical queer theory, or any of the other critical theories, which is, you know, whatever you feel in your gut, that's the most true thing about you. And everything in reality has to change in order to accommodate that. You're filling kids heads with knowledge in their bellies with passion and doing nothing to cultivate the moral will and the moral imagination.

But as Lewis closes that essay, he says, you know, we do this, and then we're shocked when we find traitors in our midst.

Another way to say this, Myrna, would be that the introduction to these moral absolutist ideas about LGBTQ identity or the way we're talking about things like race or the environment, you know, Good heavens, no one would look at Greta Thunberg and think that she's morally neutral. She is advancing what she thinks are moral absolutes.

And isn't it interesting that just 10 years ago, we were talking about moral relativism, everyone should believe what they want, no one should impose their views? And now you can't find a moral relativist.

Yeah, and especially in education, especially among the cultural, academic media, elites. I mean, they're clear on what's right and wrong and that you're wrong. You know, if you disagree, and not only wrong, but you're you know, what's wrong with the world wrong with America and you might end up ending the planet. I mean, there's an absolutism that defines our generation.

That's only possible because of the previous generation of trying to be quote unquote, morally neutral. This is what Lewis was talking about in Men Without Chests.