What the Virginia election teaches about changing attitudes toward education 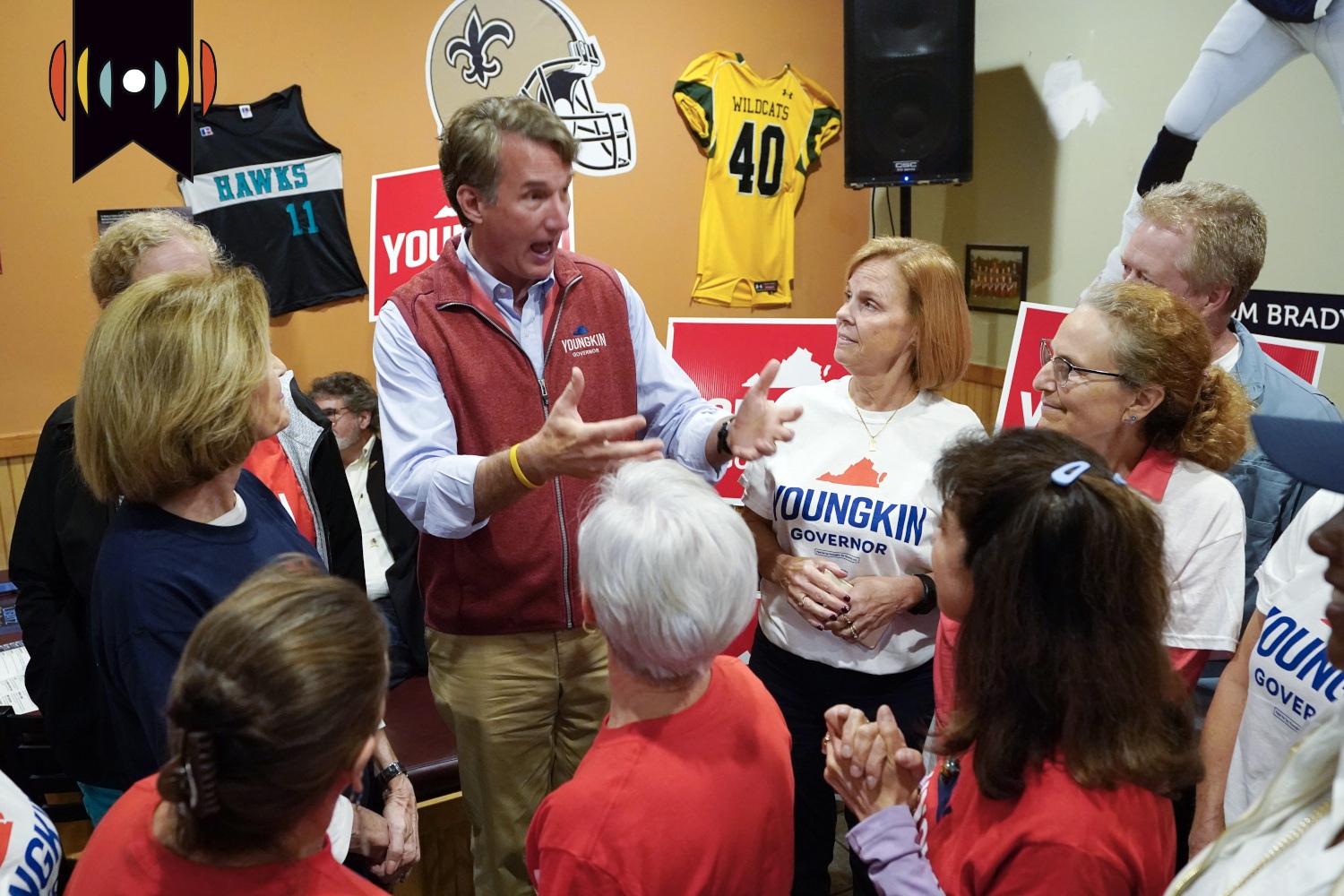 MYRNA BROWN, HOST: It’s Friday, November 5th, 2021. Glad to have you along for today’s edition of The World and Everything in It. Good morning, I’m Myrna Brown.

NICK EICHER, HOST: And I’m Nick Eicher. It’s Culture Friday. I want to welcome John Stonestreet, the president of the Colson Center and host of the Breakpoint podcast.

EICHER: I know you were following the Virginia election, and I want to talk about the big issue of the contest, which seemed to be education. We’ve talked a little about this before, the potency of this topic: Here are some numbers, to quantify it a bit. Brad Wilcox—a UVA sociologist—wrote in The Wall Street Journal: In September, voters who said education was the No. 1 issue for them preferred the Democrat by a margin of 33 points. By election day, that 33 point lead not only evaporated, it gave the Republican a 9 point margin, a 42 percent swing in a matter of weeks. That’s a pretty violent shift.

STONESTREET: And you can very much kind of mark when it started to shift and shift violently. It was when the governor basically brought back in to the statewide conversation, a debate that goes to back to the beginning of civilization, which is whether or not kids belong to their parents, or they belong to the state, when he said that parents had no place at school board meetings, and they shouldn't have any say in deciding the education of their kids. And look, you know, he tried to recover, he tried to talk about it being out of context, but you played the whole clip. And it was pretty clear. But I think it was a perfect storm, there was a couple other things happening as well. Virginia was very, very locked down in its response to COVID-19 throughout the pandemic. And you also had kind of a, I think, a growing discomfort with not only the questions of education when it comes to race, but when it comes to the LGBT stuff, that's, that's something that people need to understand, you know, the LGBTQ activism in the Loudoun County School Board, which, of course, was the microcosm of the whole state, they had been very aggressive on the LGBTQ stuff kind of infiltrating that into the school and into curriculum. I mean, years ago. And, you know, that was kind of brought to a head when parents who had had the opportunity during COVID, to kind of listen in to what was happening in the classroom at a rate that they never had before, had a closer view of the sort of books, the sort of resources, the sort of lessons that their kids were being confronted with. And then that statement from the Governor, I mean, it was a done deal. And then if it could have gotten worse, what happened with the Loudoun County School Board, covering up a sexual abuse that happened from a 15 year old boy dressed in a skirt, and then actually not only going after the dad of the girl, but then turning around and portraying him as a domestic terrorist. I mean, you know, but at the end of the day, if you get down to the very root of it, it's whether kids belong to the state or whether kids belong to parents and there's only you know, I know that, you know, the critique is that a lot of parents have, have basically outsource the education of the kids to the state for a really long time. But apparently there's a line and that line was crossed by the state of Virginia.

BROWN: Now, the Democrat in this Virginia race was really trying to play up the racial divide, but one of the other shocking turns of events in the election was victory for a Jamaican immigrant by the name of Winsome Sears, the first black woman elected Lt. Governor. She’s a U.S. Marine who is a proud patriot. She ended her victory speech with a rousing, “Thank you, Jesus!” and she had this to say about racial harmony. Let’s have a listen.

SEARS: There are some who want to divide us and we must not let that happen. They would like us to believe we are back in 1963 when my father came. We can live where we want. We can eat where we want. We own the water fountains. We have had a black president elected not once but twice, and here I am, living proof.

And she criticized those who would divide us by race. Isn’t that, after all the divisiveness we’ve had of late, exactly what we need to hear?

STONESTREET: You really couldn't have written the script any better. Just a groundbreaking historical when in so many different ways, and it doesn't count because she's a conservative, it doesn't count because she's a Republican in many minds. There was just so many ways that the candidacy of young Kim Youngkin was compared to Trump and therefore put into the category of white supremacy and there was just so much there and then you have Winsome Sears, this remarkable woman.

You know, Jamaican immigrant. I lived in Jamaica for a year and the strength of Jamaican women is legendary. I mean, just, you know, and the faith, the connection. And as soon as I heard that, that was her descent, I knew immediately she was a believer, because there's a strength of faith that comes out of this community. And it by the way, and undercuts the narrative, that the deepest part of who we are is our race or ethnicity. Clearly the deepest part of this woman's identity is her faith or belief  in God, her convictions that come out of that and shape her political views. And she has no you no problem kind of mixing that with with her faith and even grounding it. And then you add in the Marine part on top of that, and that her husband is a Marine, a man this. I mean, that's, I mean, what a powerhouse. And it's just so interesting that so many people and I would have to say even though I'm a Virginia native, haven't grown up there haven't lived there for a while. But, you know, I was just unaware of all the details here until she won. And that just tells you so much about how this whole narrative around this election was so hijacked, and you know, kind of retrofitted to fit the narrative of the Trump years. And that's a disservice of the media. And when you hear her speak, when you if you go back and listen to her speech, you just realize, Look, she's defined by an intelligence, a courage, a winsomeness, which makes her, you know, name all the more appropriate. That and a faith that's so much more important, you know, to who she is and who she's become than the typical narrative allows. So I'm excited. I think she's got quite a future in the political space too. In Virginia, we'll see what happens next.

EICHER: So it was one of these historic nights, election night, and then you had an African-American moderate Democrat elected mayor of New York—Eric Adams, former cop—wins on a tough on crime message and that leads to my last question before we go: Any thoughts on the defund-the-police movement? If anywhere that might’ve been an issue that would’ve really caught on, I think it’d have to be Minneapolis. But it didn’t: voters there rejected it pretty resoundingly, with 56% voting against the defunding ballot measure. Thoughts on where the defund movement stands right now?

STONESTREET: Well, I'm glad you brought up the New York Mayor race, because that's probably a more resounding defeat for the defund the police movement, you know, per se, even though it wasn't a ballot initiative, but it was really a choice between candidates and and this was a guy who clearly ran on the fact that he was going to be tough on crime. Now, look, I think that there's a whole lot of how we should do policing that should be up for debate, and we should go after this. But but but here's the deeper issue. And it goes to what Chuck Colson said, is the choice between the conscience and the constable. You cannot have freedom. Unless you can govern yourself, you will either be governed by your conscience or the constable. If you try to defund the police, it will work in a utopian society where people are, you know, highly motivated to do the right thing. We've seen historical times and places in which the police force did shrink, but it shrunk out of necessity, not out of protest. It shrunk because people were governing themselves. The famous example here is Victorian, England, and London and what took place there with the social reforms of the Claphams and Wilberforce and so on. You know, you can see stories when Christianity really catches on and really changes inner city drunkenness and things like that. You can see that in South America, you can see that even in certain times and places throughout American history. We are not a society governed by the conscience. So any attempt to get rid of the constable is going to be temporary. It's not going to be a permanent solution. It's not a real it's not a real thing. It will actually create an awful lot of hurt and pain for people in the meantime, because it's it's this is the choice: you either govern yourself internally, with the conscience, with faith, with family with social institutions. are outside the state or you have to be governed by by force by the outside by forces of the state. And so to try to lower the enforcement from the outside, at the same time you're lowering the enforcement from the inside. The math doesn't work. And I think that's what we're seeing. And I think we're gonna see a really big pushback and the pendulum go completely the other direction during the midterms. The elections of this week were only a preview of that.