Culture Friday - Gratitude for the good and bad

WORLD Radio - Culture Friday - Gratitude for the good and bad

God calls us to be thankful in all things, not just thankful for our blessings 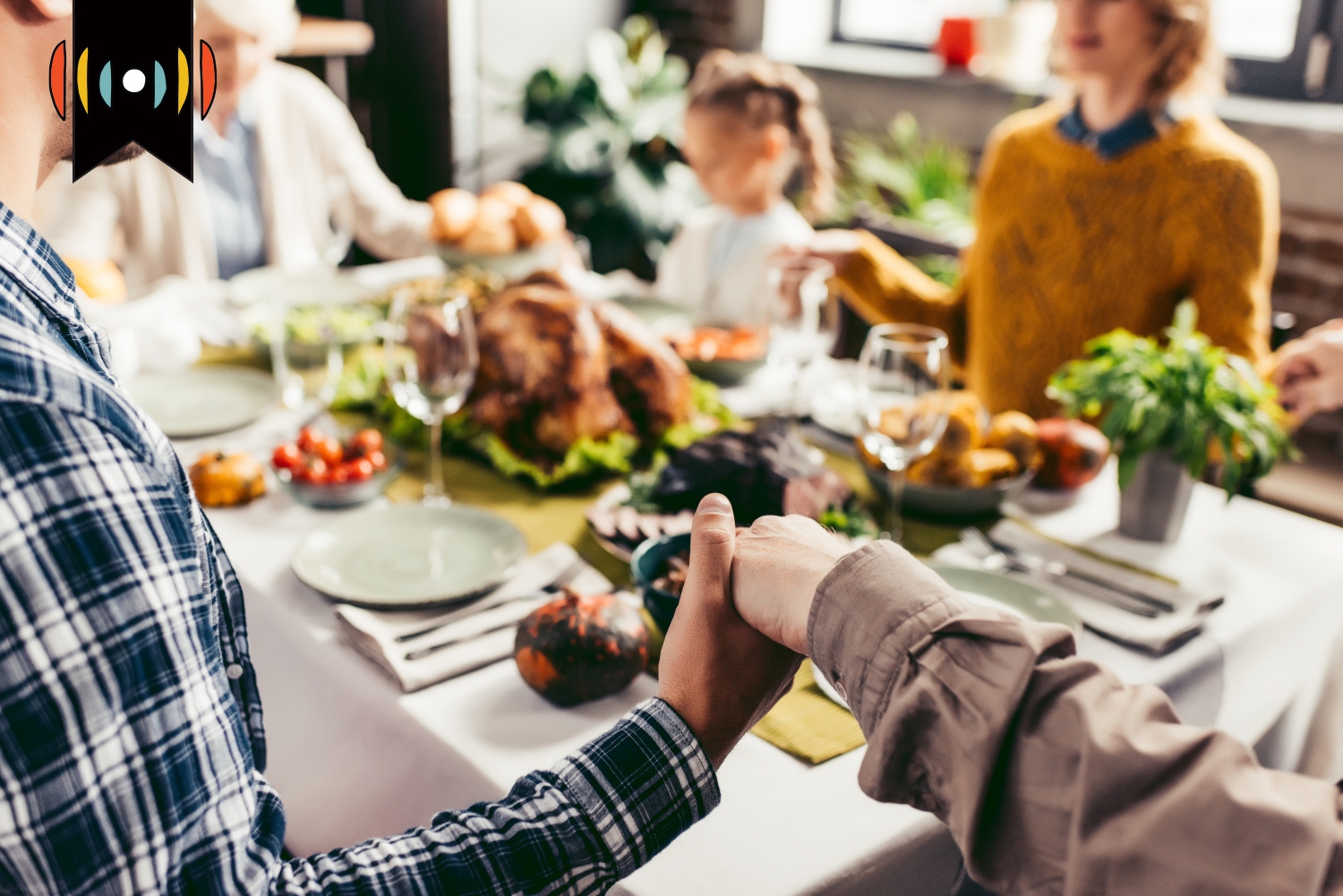 NICK EICHER, HOST: And I’m Nick Eicher. It’s Culture Friday. We want to welcome John Stonestreet. He’s the president of the Colson Center and host of the Breakpoint podcast.

EICHER: Well, on this day after Thanksgiving, John, now that we’re all in a sort of reflective mood, I’m reminded that the Scriptures call us not so much to be “thankful for” as much as “thankful in,” in other words, “in everything give thanks,” as we read in first Thessalonians.

What I’ll do is ask you to cover both sides of that, John, and begin easily, giving thanks in the good things. What would they be for you this year?

STONESTREET: Well, I mean, I guess the obligatory question, or I guess the obligatory answer is my family. But I really am. I mean, I'm watching three girls grow to become young women, I'm watching God work in all of their hearts in very unique, distinct and obvious ways, not least of which is through the introduction four years ago, they're a little brother who simultaneously makes their lives both joyful and miserable, as good little brothers are supposed to do. And he's learning how to do that I'm watching him learn, I'm watching light bulbs, come on, his vocabulary expand much in how God grows my wife and me, as we learn what it means to parent and new stages of life, new challenges. Driving in Colorado, for example, where there's too many people on the roads and too much pot in the air. You know, this is, but it's just fun to watch these new stages. And I am really, really grateful for that. And so it's not just an obligatory thing, there really, in very specific and unique ways this year. You know, you see God's faithfulness, not only to me, but to the people that I love. And so there's a lot of fun.

EICHER: So John, draw that out to the wider culture—beyond the good functioning of the Stonestreet culture—what positives in the larger culture can you be thankful in.

STONESTREET: You're not gonna allow me to be narcissistic. You know, I can't just focus in on my, my own family. Well, let me make a connection. Then I did a commentary this past week on a just a curious and tragically sad story that points to something good. And I say that in quotes and uncertainty, but it has to do with Emily Ratajkowski, who was a famous model, whose career started when she started in a terrible music video, that was basically a justification of sexual assault and sexual harassment. And you think about where the culture was in 2013, and the victimization of young women and as a dad of three little girls, so I'm going to make this a little bit personal and a little bit cultural. But that was completely normal back then. And, you know, it's hard when culture learns its lesson by plummeting off the ground. It's hard when culture learns its lesson, kind of by means of gravity. In other words, it jumps off the roof and then hits the ground really hard. But that is the feature of the Me To movement. And there are ways in which we justified the abuse and objectification of women. Just yesterday, culturally speaking, that we don't allow any more today, at least, somebody like her can step up and say, you know, what, what, what happened to me wasn't okay. And she admitted partial responsibility, but also admitted that what happened to her wasn't okay. And we have a culture now that listens. And there was this moment in time, right a few decades. And there was this moment in time, right? A few years ago when that happened, you know, Hugh Hefner died and we celebrated him as a hero of women's liberation. And three months later, we were arresting Harvey Weinstein. So now we're here we are five years after that, and six years after that, not however long it is, I don't remember. And we see some of these things that have really changed and, and you know, it's hard when culture learns a lesson that way. It's brutal, but it's a better culture that's learned that lesson than one that hasn't.

EICHER: And two, this is probably the easier of the two-pronged question—the negative, because there’s so much of it, describe how you’re thankful in the things you regard as not so good?

STONESTREET: You know, I read back to stories of people who have given their lives for Christ and very real and tangible ways, either physically, biologically, socially, political freedom or whatever. I think, as I said before, the greatest contribution of Rod Dreher's latest book Live Not By Lies are the stories of faith, Christian faithfulness, and culturally difficult times of persecution under the communist era. And you think about these names, and you say these people gave thanks for the privilege of sharing in Christ's sufferings. Now, we don't have any idea what that's like today. We have a better idea this year what it's like than last year, our friends, Barronelle Stutzman and Jack Phillips have a better idea about what that's like than what we do. And we're instructed to give thanks for that privilege. I would never wish that on anyone, even my enemies much less my friends like Barronell and Jack. But boy, they've done us a great service. I'm thankful for their example. And if this is where we're headed, and I don't know what that means, but if we're headed more into that way of being Christian than what we've been used to, then we're to give thanks and we join the ranks of Christians who have gone before us.

BROWN: John, I believe I heard a collective heavy sigh earlier this week when it was announced that 77-year-old grandmother' and florist Barronelle Stutzman was ending her religious liberty case. This, of course was the nearly decade old case of Stutzman vs. the state of Washington and the American Civil Liberties Union. For those unfamiliar with the story, Stutzman, was sued by that state's Attorney General in 2014 for refusing to create a floral arrangement for her friend's wedding to another man because of her Christian beliefs about marriage. John we've come to rely on the courage and the groundwork laid by people like Stutzman and cake designer, Jack Phillips and most recently web designer Lori Smith. But at some point, it could be our names, or our adult children's names in the headlines. The hymn Onward Christian Soldiers comes to mind, but I wonder, are we as Christian ready to pick up the baton?

STONESTREET: I don't know. I mean, this is what we will know. And in the days ahead, in one sense, it was a sigh of relief because Barronelle Stutzman faithfully lived out her convictions for as long as she was called to do it. And for some reason, the ACLU'S deal was $5,000. I don't know if they realized that they were being bullies. I don't know if the optics were bad for their causes, you know, to try to collect from this poor woman that they had bullied now for eight or nine years. I don't know what was behind that. I know that Barronelle was faithful and and we owe her a debt of gratitude. We owe ADF, we owe God gratitude for giving us this example of what the rest of us might be called to. I hope everyone by the way goes to the world opinion page and, and reads the piece that was done by Barronelle's longtime attorney, Kristen Wagoner from the Alliance Defending Freedom about this decision. Because, you know, we did a Breakpoint commentary and then I read Kristen's piece and I was like, Man, she she did so much better than me. And sorry, and said, and I said, Wow, she did so much better than I did. But read that piece because there's a real sense there of a calling for the rest of us. This isn't over. Barronelle is a hero, and we're grateful. I am pleased.

By the way I don't know if this is an appropriate time to announce this, but about a month ago, our board at the Colson Center determined that Barronelle Stutzman and Jack Phillips would be co-recipients in 2022 of the William Wilberforce award, an award founded by Chuck Colson to celebrate and honor public faith that is a reflection both of a personal commitment to Christ and the sort of public input and living out the sort of public implications that faith requires. And times past that looked a lot more like Wilberforce, you know, standing in front of Parliament or standing in front of injustice and leading the way. I think increasingly, it's going to look in our time in place more like courage in the face of incredible struggle. And so I hope we're ready. That's why we're honoring Jack and Barronell because they've shown us the sort of lives that we have in front of us. No matter what happens, faithfulness is what this is about not success. Baronelle is such a wonderful example of that for the rest of us and I'm grateful for her.

STONESTREET: Thank you both. And Happy Thanksgiving.