Celebrities to politicians are peddling misinformation about abortion

People rally in support of abortion rights at the state Capitol in Sacramento, Calif., May 21, 2019 Associated Press Photo/Rich Pedroncelli 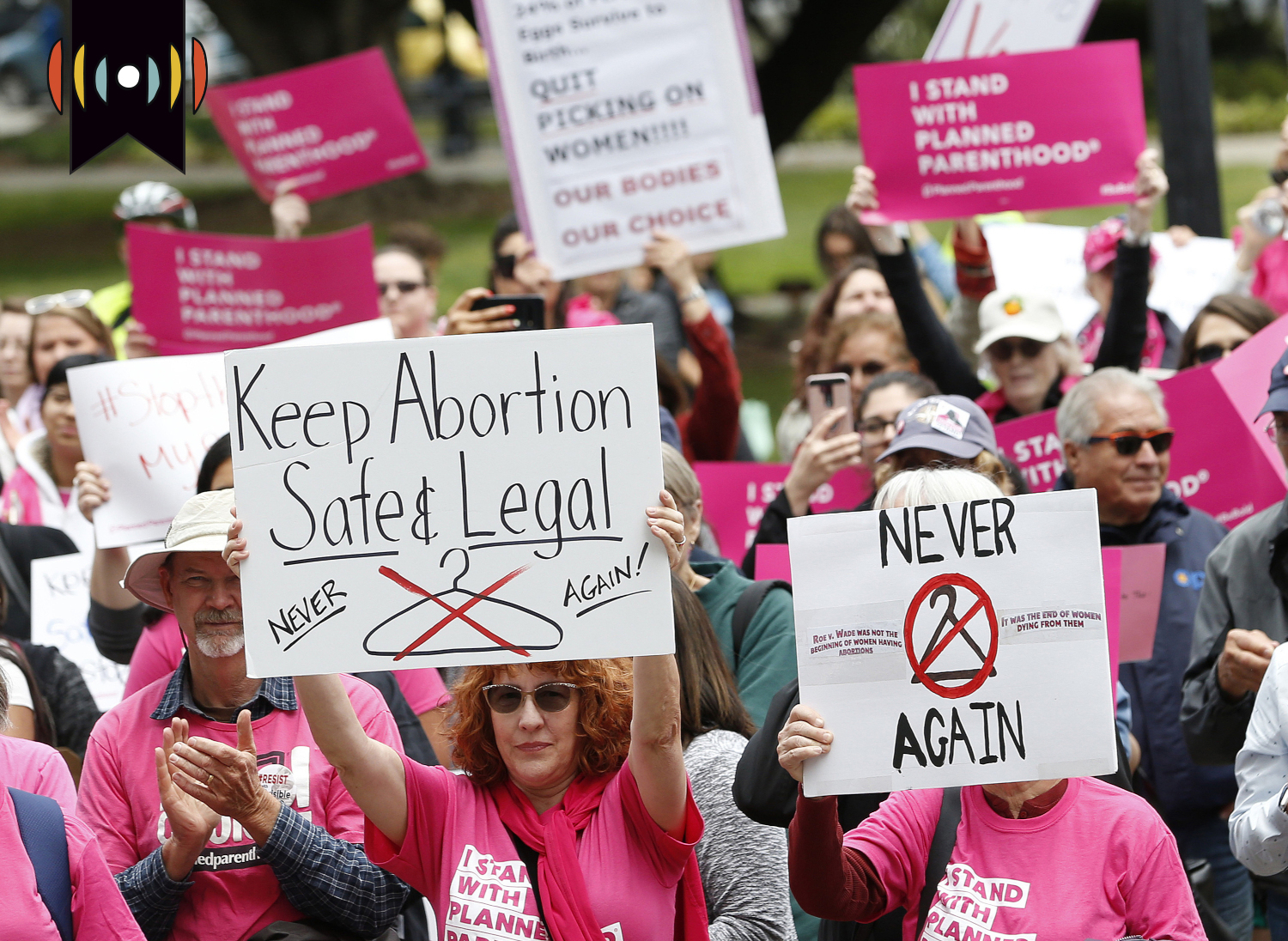 It’s Culture Friday and time to bring in John Stonestreet. John is the president of the Colson Center, and he’s the host of the Breakpoint podcast. John, Good morning.

BROWN: Well, John, my 30 year old daughter flagged this story for me and maybe you've heard about it as well. Chrissy Tegan, model, author and wife of entertainer John Legend, made a startling confession about a miscarriage she had two years ago. And the reason we know about the miscarriage is because Tegan and Legend posted on social media very revealing very personal images of them in a hospital room holding each other after losing their baby at 20 weeks old. Well, Teigen, who is currently pregnant, is now saying that miscarriage two years ago was actually an abortion. She says she came to the realization after the Supreme Court overturned Roe v. Wade. John, I've heard some rumblings about this being a sad example of a mom and dad using social media in the most vile way ever. What do you make of it?

STONESTREET: Well, not much. I mean, because I don't want to make much of the kind of the cult of self revelation that happens on social media. This particular person, Chrissie Tegan, if I'm saying her last name right, is a very popular social media person. I do know enough about social media to know that she's well known in that space. Here's the bigger issue that's happening. I don't know what to think of this because I don't know what's meant. This past week. person running for state office in North Carolina posted a similar story. The details are a little bit different. But what she did as a Democratic candidate trying to kind of own the Republicans in North Carolina who are advancing anti abortion pro life legislation, is to talk about her abortion only she wasn't talking about an abortion, she was talking about a miscarriage that she had and what she went through a D&C and she called the D&C, which of course, is a medical procedure that can be used to cause an abortion or can be used and part of treatment for women who have undergone miscarriages. It can be used either way it she but she identified that as an abortion. And she did that in a way that we're now hearing. And in the New York Times, you're hearing on major media outlets that the sort of legislation that's being promoted would ban a procedure like D&C. Of course, none of that is true. There's not a single state law that has been proposed or a single state law that has been passed, that would limit care for women who are undergoing miscarriages. But that's what we're hearing. It's simply not true. It's either a outright lie, or it's something where somebody has just believed it. And then the case of a celebrity, like Chrissy Tegan, she might just be telling a story wrong, because of all the bad information out here that is being trumpeted and pushed around so often. It's just really a disturbing set of conditions. So for example, in this Facebook post for this woman running for state level office in North Carolina, where she basically described the courage of having her own abortion, but she wasn't; she was talking about having had a tragic miscarriage and the hospital taking care of her, none of which would be overturned by any law that has been proposed in North Carolina. She's using it in a way to get political sympathies and the comments reflected that she was getting those sympathies. There's a lot of misinformation out there right now, about what an abortion is. And I'm grateful for Alexandra DeSanctis in particular over at National Review, who has done a very careful study of all the state level laws, and has demonstrated that this is just misinformation being passed around. I don't know if that applies to this particular situation with Christy Tegan, but that's what really matters in this whole story. So I'll take that question, Myrna, and make it about what I want to.

EICHER: I want to call attention to a study on social media misuse, specifically about the explosion of posts on the subject of self-harm. The study comes from an outfit called the Network Contagion Research Institute … along with Rutgers University. The study found that posts about self-harm grew 500 percent in less than a year. Our Juliana Chan Erikson wrote about this for WORLD and I’ll link to her piece with the requisite warnings about what you’ll find in the story. Very disturbing.

But there are a number of directions to go on this. It’s not clear that this growth represents actual growth in self-harm, but growth in the number of young people discussing it on social platforms, and in some cases receiving advice on how to conceal the self-harm from parents or family members. Here’s the question: To what do you attribute this phenomenon and how can parents know about this?

STONESTREET: Well, you know, as a friend of ours often says, it's not one thing, it's everything. One part of this is the cultural set of ideas, the backdrop that's at work here, which is one that denigrates the body. It's such a weird time we live in in which we try to fight against these rising rates of teen suicide, and yet, at the same time, push forward legislation that actually makes Doctor assisted suicide an option, we say Suicide is not an option unless it is. And that inconsistency if we think that young people don't notice that they're just simply foolish, we say that the body should not be harmed, that things like cutting, and then these things are bad for you. It absolutely is. But if you think you were born in the wrong body, it's absolutely okay. And fact, as we learn this week about Vanderbilt University, no matter even if you're a minor, will do irreparable damage to your body in order to justify your wrong mental state. It's just a, the inconsistencies here are incredible. And if we think those inconsistencies will not bear fruit, well, we're just foolish, of course they will. And so that's the ideological factors that are at work, or are mixed messages about whether it's okay to harm yourself, and whether your body is actually good or bad. I think there's also then the social media component of this. And when you say, How can parents know about this? Look, at this point, parents might not know about the specifics of this. But if parents don't know that the internet, particularly in the form of cell phones, handheld devices, through social media, is feeding their kids really, really bad and dangerous ideas. I don't know how else they could know. In other words, every single thing points to the fact that social media, in particular, is bad for young people, especially young girls. And you know, I was thinking about this this week in our editorial team at the Colson center as we were preparing one of our commentaries for our podcast is, you know, Jesus said, “If you're right eye offends you, if your right arm offends you, get rid of them.” Like if Twitter offend. If Twitter is harm, if Instagram is causing damage to your daughter, get rid of it. Say no. Stop it. And it's amazing how unthinkable that is for so many of us. I think it needs to become thinkable.

EICHER: John, you saw that the Supreme Court turned down a request for an emergency stay for Yeshiva University in New York—this is the religious school that denied recognition to an on-campus LGBTQ group called YU Pride Alliance. Seems like a cut-and-dried religious-liberty claim, a religious school—in this case Orthodox Jewish—contending for the right to be Jewish. There’s related action going on where Seattle Pacific University—and that’s a Christian school—is under legal pressure to reverse its policy of not hiring people who are in same-sex relationships. A group is suing the board of trustees on the grounds that it’s failing in its fiduciary duty to keep the school up-to-date with the social views of the wider community.

What are your thoughts on these new pressure points?

STONESTREET: You know, I think that these are interesting stories. And I think they're examples of even a larger trend than just having to do with religious liberty, I do think we're seeing more and more examples of conservative Christian beliefs or religious beliefs in the case of Yeshiva University, especially on the area of sexuality not only being considered wrong but being considered harmful, and therefore, they have to be stopped. I learned this week, for example of the sort of offensive attacks that state governments and radical pro abortion states like California and Washington are taking against pregnancy resource centers, where it's no longer a, you know, you remember that case in California a couple years ago, where the government was like, Oh, you have to actually advertise the state services and the Supreme Court just kind of smacked that down. When now you actually have the state actively not saying that. pregnancy resource centers has to campaign for them, but they're actively campaigning and investigating pregnancy resource centers. I think there's you know, Your your line of these are pressure points, these are new pressure points is exactly right. And the ability of religious institutions to be religious is something that the Supreme Court has been incredibly clear about. And so, you know, in this case of Yeshiva University, the Supreme Court basically said go through the process. But I don't think anybody really is up in the air on how the Supreme Court rule if this actually does make it back up in the Supreme Court then takes the case. I think there's a much bigger risk not of the Court, the Supreme Court bringing relief to these pressure points as it is that these schools themselves cave on it. You know, if you are a religious institution that is religious, and that articulates and is consistent about the religious conviction, you have the right, and the Supreme Court has repeatedly defended that right to operate according to those convictions. But there's a whole lot of particularly historic evangelical schools that are really scared of that they're running away from that they're self censoring way more than they're going to be censored. And so I think the my main thought on all this is that Christians will have to be Christian and wishy washy, squishy middle of the road stuff isn't going to pull it off.

BROWN: Well, John Stonestreet is president of the Coulson center and host of the breakpoint podcast. Thank you, John.