As states feud over LGBT ideology, we wonder just how fractured are we the people? 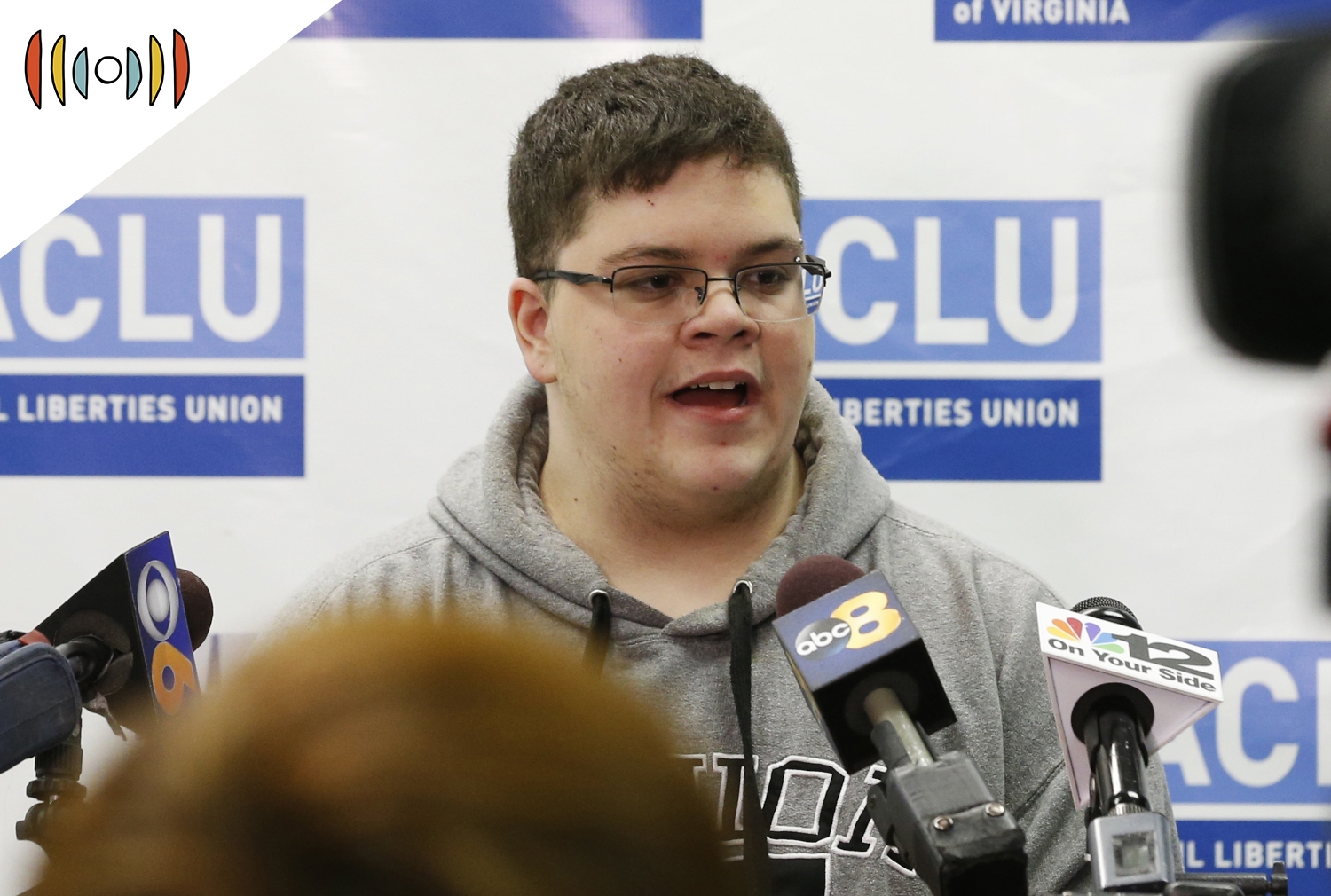 By not acting, the Supreme Court sent quite a message this week in declining to hear a case out of Virginia dealing with gender identity and the use of restrooms. And specifically how public high schools are supposed to work it all out.

Lots of background detail here. We start in a high school in Gloucester County, Virginia. Student’s name is Gavin Grimm.

“The principal initially allowed Grimm to use the boys’ restroom, but school policy required students to use facilities according to their biological sex. The school gave Grimm the option of a single-stall restroom, and Grimm sued for sex discrimination in 2015.”

BUTLER: By 2016, the Obama administration weighed in by issuing legal guidance through the Department of Education that it was the position of the government that federal law on sex discrimination applies to gender identity.

By the time that Grimm’s lawsuit got into the appellate court, it relied on that Obama guidance. The 4th Circuit Court of Appeals ruled that the school must allow female students who claim a male gender identity to use boys’ restrooms and by implication vice-versa.

EICHER: As we said, the Supreme Court in 2017 had agreed to review the case. But then the Trump administration scrapped the Education Department guidance. So the high court sent the case back down to reconsider.

Meantime, the Supreme Court took a totally different transgender case—an employment case—and in the end wound up effectively adopting the Obama position that federal sex discrimination law should apply to gender-identity cases in the workplace.

So the Fourth Circuit appeals court applied that standard to the Grimm case and again ruled in favor of the transgender student.

BUTLER: So now, to present day. The appeals court case was appealed again to the Supreme Court and the Supreme Court declined to accept the case and that means (for now) the transgender bathroom decision is binding precedent in five states: Maryland, Virginia, West Virginia, North Carolina, and South Carolina.

EICHER: And unless another federal appeals court rules differently, the Supreme Court currently has no case it can use to clarify whether its transgender employment case—known as the Bostock case—applies in the school-bathroom context.

It’s Culture Friday. John Stonestreet is here. He’s president of the Colson Center and host of the Breakpoint podcast.

STONESTREET: Of course, I say that as a Virginia native.

EICHER: Well, I did my time in Virginia, but only two years. But yeah, so another milestone of sorts here and again, from Virginia. But we have the Trump Supreme Court basically handing a victory to the LGBT movement.

STONESTREET: Well, I mean, I think that's accurate. And I think what we have as this kind of whole conversation about LGBTQ rights progresses along legal lines, is just a little victory, little victory, little victory, one step forward, two steps back two steps forward, one step back, because what we have is a Supreme Court, that is just wary a super reticent from making any sort of sweeping declarations that in some sense, pretends to settle the culture war. And of course, that reflects something I think that, you know, people should understand, which is, the courts are more a reflection of the culture than a leader of the culture, not that they don't matter, not that they're not part of culture. But that stuff tends to be downstream, and not not not upstream. And so we're going to, we're going to be jerked back and forth here, we're going to be going back and forth, based on who's in the White House. So we're going to get, you know, the Dear Colleague letter from President Obama, and we're going to get a completely different take from President Trump and his administration. And then President Biden is going to jump in and attempt to apply, you know, the Supreme Court decision, Bostock in ways that the court itself specifically said it shouldn't be applied. And he's going to try to do that. And then some courts are going to allow it, and then the Supreme Court, the highest court in the land is going to try to sit it out. So I guess there's a lot of different ways to talk about this. But it also should help us learn the lesson, we needed to learn from the pro life response to Roe v. Wade, which is we don't wait for the court to do the work that needs to be done in the larger culture. Parents shouldn't wait for the court to decide what schools should teach their kids, they should teach their kids, churches should not wait for a court or a legal decision or the next election, whiplash to say whether we should speak out on this or, you know, be a threat for religious liberty. It's just it's so it's so clear that Christians need to come down to what is true and what is good. Figure it out now. Otherwise, we're just going to be going back and forth in a form of, you know, Christian worldview, whiplash, that we seem to be suffering from these days.

EICHER: And you're seeing a lot of activity at the school board level, too. I mean, some of that is driven by these very questions of transgender and how we're going to accommodate what we're going to do with regard to bathrooms, and so on and so forth. “Pronouns” was the subject of one of those meetings.

STONESTREET: Well, look, let me need to give a shout out to Virginia, because I have been critical of it over the last couple of years. You know, I think that there's a few states kind of in a race, for the Abyss, and Virginia has jumped out and many ways in the lead. And yet what we saw with the case of Tanner cross is a church and a larger community of parents, and a larger community of fellow teachers stepping up going, I might not even agree with him. But this is not the kind of Department of Education we want lording over us. We want a place of religious freedom. I was highly encouraged by that. But I'll tell you what - going to a school board meeting taking the mic maybe got a little out of hand. But But and a pastor just kind of coming out going we are rallying around this guy because he's one of us. Good heavens. When's the last time we saw that? For a Christian who found themselves in the cultural crosshairs, so high five to that community, it kind of restored my hope and where this might go.

That brings the total to 17 states where the state of California will not allow state resources for official travel. Texas was already on the list and then adding Florida, that means the second- and third-most populated states are off-limits. And of course, the reason is that the California government disagrees with those states on LGBT rights.

I heard one commentator call this a cold war among the states. It’s a little frightening stated that way, but is that an accurate read? Or do you just think of it as meaningless posturing?

STONESTREET: Is it okay to say yes, I mean, I guess I guess it's a Cold War, in a sense, but, you know, my daughters sometimes have Cold War, a cold war against each other where they don't talk to each other. And it's a real cold war. But it's not a great consequence to the larger world. And I kind of wonder if that's the case here. You know, the little bureaucrats in states like to, you know, champion and pat themselves on the back. What we have seen, of course, is, particularly in these progressive states, these governors' moral posturing, and they're not following through on their own promises or their own policies, I can't imagine that they're going to be able to be consistent with their own policy for everyone else. And this is going to be the issue. Look, when the governor of California states an equal travel ban on official business to China, then talk to me about moral high ground.

STONESTREET: Well, you know, that if you go back to Samuel Huntington, his book, The Clash of Civilizations, and this may be an extreme application, but Huntington predicted that, after the Cold War, that the conflicts globally would not advance along nation states, but between civilizational rifts. And those civilizational risks weren't about national identity, they were about worldview. Look, at some point, a country cannot advance without shared definitions of right and wrong. It's one thing to disagree on the best way to get to a common goal. It's another thing to disagree diametrically on what the goal should be. And that becomes the sorts of things that creates rifts. There are rules to countries, there are rules to civilizations, there are rules to groups of people being able to survive together going forward. And you can't break those rules forever. without consequence, or as Dallas Willard put it, you can step off the roof and then choose not to hit the ground. This is actually baked into the way the world works. And so I think, Nick, your question is the right one, eventually this sort of kind of, I can't talk to you because I disagree with you. And drawing that sort of line on such an odd issue, when there are so many other issues at stake. You know, it's unsustainable going forward. It's, you know, there comes a point where you can't reason you can't be rational alone. There has to be another party to the conversation at that point, things begin to break down.

EICHER: John Stonestreet, president of the Colson Center and host of the Breakpoint podcast. John, thanks!

Reading in text form what is said verbally is often hard to follow and ends up losing me. I'm glad you do it, but at times, trying to figure out Stonestreet (as an example but I'm sure has more general relevance) requires a forensic linguist.