Refugees attest to indiscriminate killings by Turkish fighters as the Trump administration reverses course, sends troops back into Syria

President Donald Trump is set to welcome Turkish President Recep Tayyip Erdogan at the White House on Wednesday, five weeks into a Turkish invasion of northern Syria that has killed civilians and Kurdish-led forces, plus put an estimated 300,000 Syrians on the run.

Syrians who have crossed the border into Iraq in recent weeks say they fled after losing property to Turkish bombs and witnessing atrocities.

Rashid Suliman is a pharmacist who was living in Ras al-Ayn, an ancient city near the Turkish border, when Erdogan’s incursion began last month. As aerial attacks to drive out Syrian Democratic Forces (SDF) in the area increased, Suliman began volunteering as a medic to care for and evacuate wounded.

“They were targeting people who were helping, doctors, ambulance drivers, medics,” said Suliman. As the Kurdish-led SDF retreated, fighting by Free Syrian Army militias working on behalf of Turkey turned to attack civilians.

The militias drove residents from their homes, Suliman and others say. Every day, Suliman saw burn victims, wounded, or dead in the street, and “people dismembered by knife.” The militias detained men, tied their hands behind their backs, and beheaded some, according to Suliman. At least one friend of Suliman was among them. “I saw them on the street, these burned, beheaded, cut. I couldn’t recognize them, only know them by their clothes.”

Suliman said Christians living in Ras al-Ayn were more targeted by militias during late October fighting. “The houses with crosses got bombed. Their houses and cars taken, and many Christians burned and killed.”

Suliman wears a silver cross necklace one of his Christian friends gave him, though he is Muslim: “All of us are Syrians, we are considered the same in Ras al-Ayn, Christian, Muslim, others.”

The violence forced the 39-year-old Syrian to leave with his family on Oct. 22 after his house burned in a bombing and the militias took the family’s two cars.

“We had to run away before we were attacked. If we were there, they would have destroyed my family,” he said. 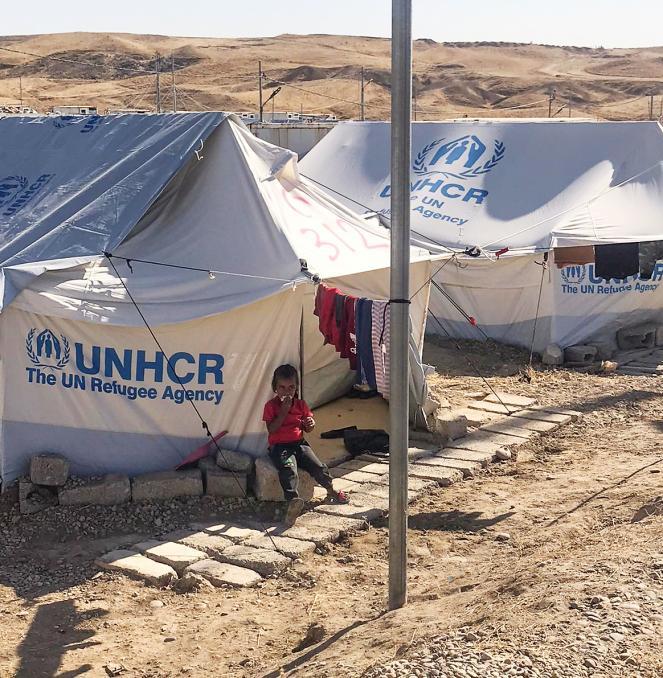 With his wife, her parents, and the couple’s four children—ages 11 months, 2 years, 5, and 7—they walked overnight then hired a car to the Iraqi border to arrive at Bardarash, a refugee camp north of Mosul. Suliman said he had to pay $250 a person to get across at an illegal border crossing to Iraq.

Like many at Bardarash, they arrived with only the clothes on their backs, dazed and traumatized by the sudden turn of events in what had been one of the most stable parts of war-torn Syria.

Suliman choked up to stop the emotion as he described the last days in his city. “I do not want my children to ever see the things I saw.”

Last week Suliman learned the ambulance driver he worked with had been shot in the face and killed in Ras al-Ayn. He showed me the photo and message he received.

Bardarash is a vibrating testament to human suffering from Turkey’s invasion of Syria, with new arrivals joining families who have been here for weeks.

“One month ago there were zero people here,” said Bryan Babcock, disaster assistance team leader with Samaritan’s Purse. “We thought it would take months to fill this camp, but it took only weeks. We thought there would be a hundred people a day, but there were 1,500.”

With a camp population currently at 12,000 people, Bardarash is a family camp of Syrian Arabs and Kurds, most of them fleeing from towns along the front lines of the invasion like Ras al-Ayn (also called Sari Kani in Kurdish), about 200-300 miles away from Iraq’s open plains. The camp housed Syrians once before, starting in 2013, when they were forced to flee ISIS takeovers. With ISIS dislodged from territory in Syria and Iraq, it gradually emptied.

The UN Refugee Agency (UNHCR), along with the Iraq-based Barzani Charity Foundation, reopened the camp. European charities refurnished a medical clinic and other services. Samaritan’s Purse, which is taking over staffing medical needs in the camp, rebuilt 525 latrines also, said Babcock.

For many families here, running from their homes was a rerun. Towns across northern Syria confronted ISIS threats in 2013, emptying at that time. Suliman took his family then to live in the Syrian city of Hasakah with relatives, returning to Ras al-Ayn a year later. This time he said his wife insisted they get out of Syria. “The Syrian people don’t deserve what is happening to them now. Why is it my fault to be living in my house in Syria when the Turkish army decides to come?” 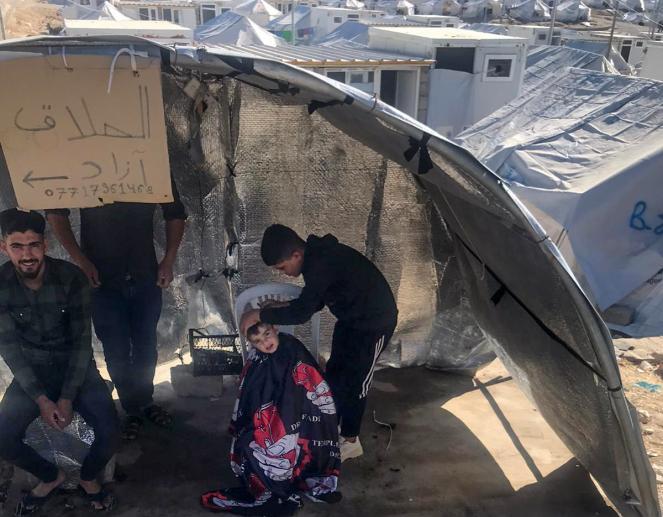 At Bardarash he volunteers with CARE, one of the nongovernmental organizations operating the camp, as the families here try to re-create a semblance of normal life. Barbers cut hair under UN-branded tents, children play on gravel roadways, and vendors have set up stands to sell fruits and vegetables. One vendor has rigged a stall with a wheel to sell cotton candy around camp. 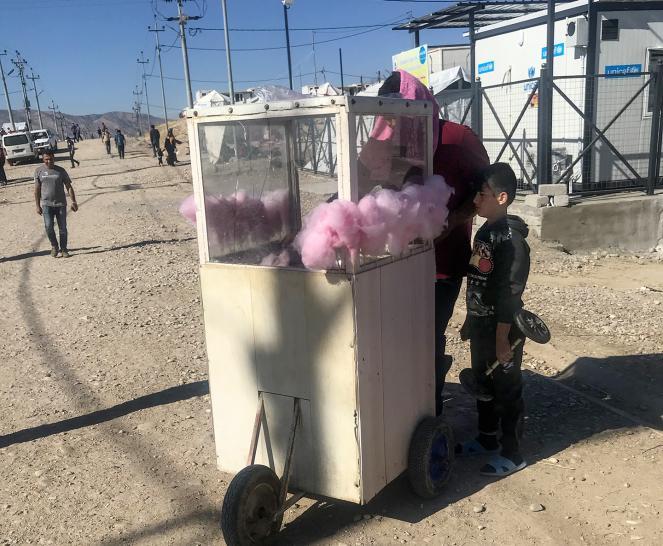 Outside the camp long convoys of American military vehicles headed from Iraq to the Syrian border. The Pentagon announced on Sunday the United States would be redeploying U.S. troops in Syria to combat “a very real possibility that conditions could be set for a reemergence of ISIS,” said Gen. Mark A. Milley, chairman of the Joint Chiefs of Staff.

That leaves unaddressed the role Turkey has played in ISIS-like tactics driving the displacement, suffering, and loss—and refugees like Suliman who have no clear view to what their future holds.