Where have you gone, Calvin Coolidge?

2021 Book of the Year: Understanding America A nation turns its lonely eyes to you

We began choosing WORLD’s Books of the Year in 2008, and here’s a first: Our Understanding America book of the year is one initially published in 1929, but now republished in an expanded and annotated version by the Intercollegiate Studies Institute.

Choosing an old book is odd, but here’s the reason: In an America full of Facebook boasting, political bragging, and opinionating without facts, The Autobiography of Calvin Coolidge reminds us of the humility at the top that we’ve lost and may be able to regain. Editors Amity Shlaes and Matthew Denhart note, “Coolidge believed presidents were there to preside, not rule. Modesty in a president was wisest.”

Baseball great Joe DiMaggio, the subject of Simon and Garfunkel’s “Mrs. Robinson” with its line “Where have you gone, Joe DiMaggio?” was famous not only for his hitting but his style. When DiMaggio hit a home run, he trotted around the bases without hot-dogging. When DiMaggio was old, he answered a question about his feelings regarding an honor bestowed on him: “At my age, I’m just happy to be named the greatest living anything.”

Coolidge, who was president from 1923 to 1929, wrote in his autobiography, “It is difficult for men in high office to avoid the malady of self-worship. They are always surrounded by worshipers. They are constantly, and for the most part sincerely, assured of their greatness. They live in an artificial atmosphere of adulation and exaltation which sooner or later impairs their judgment. They are in great danger of becoming careless and arrogant.”

Coolidge added, “When a man begins to feel that he is the only one who can lead in this republic, he is guilty of treason to the spirit of our institutions.” He offered good advice based on his own experience: “Everything that the President does potentially at least is of such great importance that he must be constantly on guard. … Oftentimes trifling incidents, some insignificant action, an unfortunate phrase in an address, an injudicious letter, a lack of patience towards someone … or too little courtesy towards another, becomes magnified into the sensation of the hour.”

The most poignant part of the autobiography concerns the pre-antibiotics tragedy of Coolidge’s son, Calvin Jr., who died on July 7, 1924. Coolidge wrote, “We do not know what might have happened to him under other circumstances, but if I had not been President he would not have raised a blister on his toe, which resulted in blood poisoning, playing lawn tennis in the [White House] South Grounds. In his suffering he was asking me to make him well. I could not.”

Coolidge continued, “When he went, the power and the glory of the Presidency went with him. The ways of Providence are often beyond our understanding. It seemed to me that the world had need of the work that it was probable he could do. I do not know why such a price was exacted for occupying the White House. Sustained by the great outpouring of sympathy from all over the nation, my wife and I bowed to the Supreme Will and with such courage as we had went on in the discharge of our duties.”

Calvin Coolidge is buried in the cemetery of Plymouth Notch, Vt., where he grew up. His gravestone stands no higher than that of his wife, Grace. When she told her mom she planned to marry, the cautious mother said Grace and Calvin should wait a year while she learned to keep house and bake bread. Coolidge snapped, “We can buy bread,” and scheduled the wedding quickly. 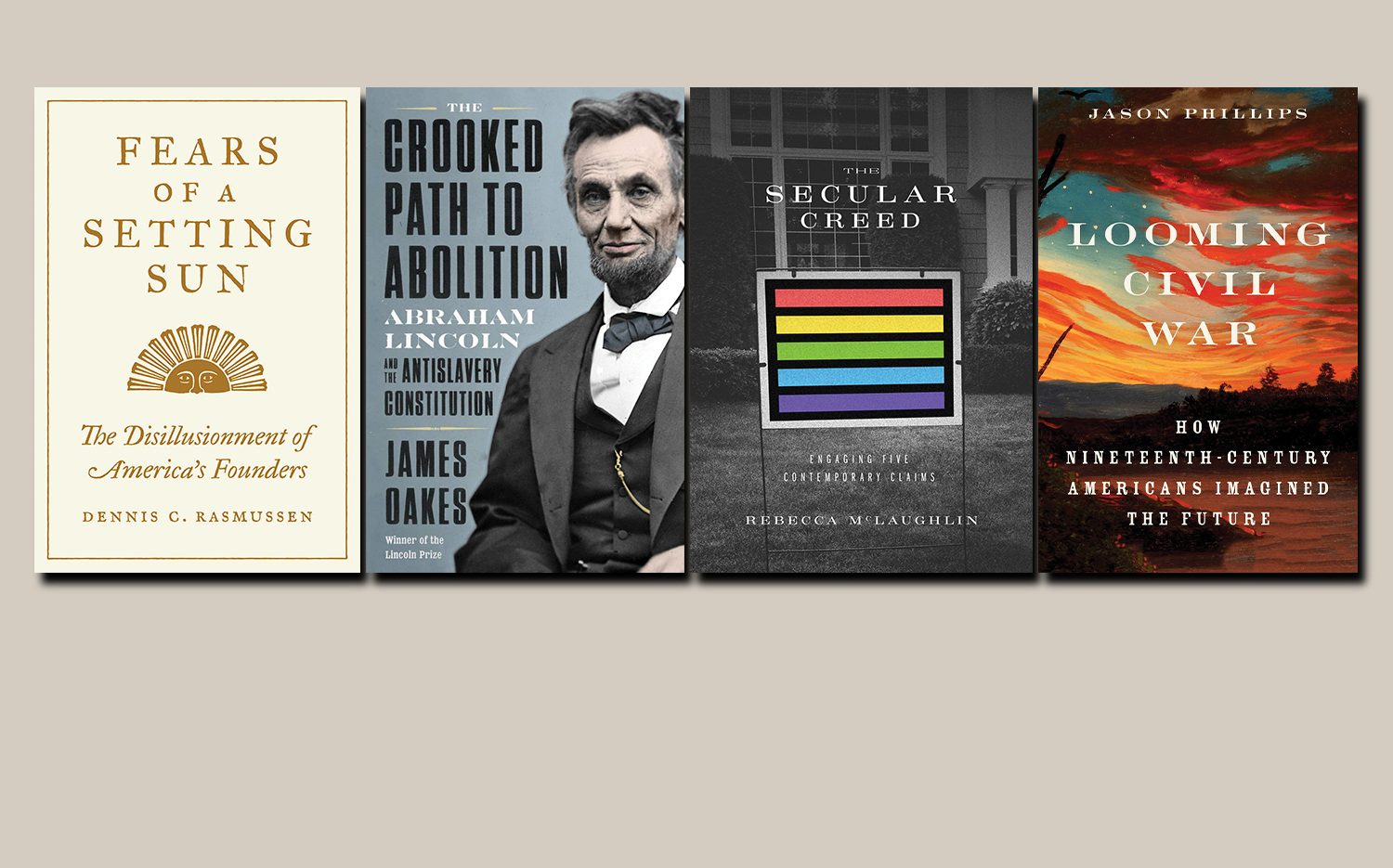 Fears of a Setting Sun: The Disillusionment of America’s Founders

Dennis Rasmussen’s subtitle is actually good news in this year of polarization. Rasmussen shows how George Washington, Alexander Hamilton, John Adams, and Thomas Jefferson all thought the American experiment was a failure and the United States would soon be disunited. That’s an important message for us to absorb at a time when “misrepresentation and party feuds have arisen to such a height” that they may not end “at any point short of confusion and anarchy.” Surprise: That’s a quotation from Washington in 1798. Rasmussen concludes, “The looming demise of American democracy has been announced countless times in the course of the nation’s history”—and since we’ve survived other hard times, maybe the United States will survive this one. James Madison, longest-surviving of the leading Founders, said in 1834 that the American constitutional order was “successful beyond any of the forms of government, ancient or modern, with which it may be compared.” That’s still true.

The Crooked Path to Abolition: Abraham Lincoln and the Antislavery Constitution

James Oakes skillfully shows how Abraham Lincoln believed “the Declaration of Independence was the guiding spirit of the Constitution” and maneuvered through political thickets in such a way that enslaved persons eventually gained the right to life, liberty, and the pursuit of happiness. The history of standing up against slavery is important in itself, but we can also apply “crooked path” complexity to the battle against abortion. Slaves and unborn children should not live or die as their temporary “owners” see fit: Large or small, past or present, they are created in God’s image. Lincoln’s accurate prediction about the Fugitive Slave Act is relevant to today’s pro-abortion provisions: “There are some laws that communities find so morally offensive that they will never be fully obeyed.”

Rebecca McLaughlin has given us a brilliant short book on an everyday problem: How should we react when we walk down the street in blue or purple neighborhoods and see yard signs proclaiming Black Lives Matter, Love is Love, and so on? McLaughlin helps us distinguish between racial equality (a Biblical concept) and the LGBT agenda, which is clearly un-Biblical. Staying low on the ladder of abstraction, she also explains why Christianity is the basis for women’s rights and why we need to oppose transgender trends. Mocking does not help. Biblical objectivity does.

As America polarized in the 1850s, many “felt dragged into a terrifying future” by extremists from both regions. Jason Phillips shows that by 1860 “unreason and dread” poisoned politics, the telegraph offered “instantaneous information that promised more knowledge than it delivered,” and many Americans felt they had no choice but to pick one tribe or the other. Two Southerners had different expectations. In the vision of editor John Beauchamp Jones, “the gutters ran with blood, and the waysides were strewn with the dead.” Edmund Ruffin, who fired the first cannon shot of the war, prophesied pro-slavery victory. In June 1865 he committed suicide.