Where have all the biscuits gone?

Susan and I have had three dogs during our 40 years of marriage. The third at the very ripe old age of 17 died in December, so just before Christmas we bought from the Austin Humane Society our fourth, Greeley. With bits of blueberry biscuit we’re training him not to bark or pull toward dogs or deer as we listen to The World and Everything in It during our morning 2-mile walks.

One day during the last weekend of February we forgot to carry a biscuit. Greeley displayed his good manners several times and looked up, expecting fine dining. He showed surprise when reward did not follow virtue. We sensed the plaintive question forming in his head: “Where’s my BISCUIT?” That same weekend, day by day, leaders in the three most influential definers of American culture—news media, universities, and entertainment media—didn’t get the respect or adulation they thought they deserved. Here are details:

• During his first month on the job, Trump press secretary Sean Spicer upset traditions. The Associated Press representative didn’t get to ask the first question. The New York Times didn’t get kid glove handling. Reporters from outside Washington could ask questions via use of “Skype seats.” Friday, Feb. 24, brought the cruelest blow: Spicer scheduled an informal briefing known as a "gaggle" and invited the White House press pool—representative reporters who share their notes with all media colleagues—plus several more. He did not include a Times reporter and some other liberal illuminati. They cried out, “Where’s my BISCUIT?”

• This year may be hard sledding for academia: President Trump prefers generals to professors and tends to lump brainiacs with maniacs. On Saturday, Feb. 25, NPR reported the unkindest cut of all: “Cuts for publicly funded colleges and universities” seem on the way. NPR quoted the new Republican governor of Missouri, Eric Greitens, saying what we’re also likely to hear from Trump: “Universities, college professors, administrators are going to get less money than the politicians had promised them in the past.” I can already hear my former University of Texas colleagues crying out, “Where’s my BISCUIT?”

• Illustrious actress Meryl Streep in January attacked Donald Trump, saying “when the powerful use their position to bully others, we all lose.” At the Oscars on Sunday, Feb. 26, many of filmdom’s elect artfully tried to bully the president and viewers. Inside Hollywood’s Dolby Theatre, where tight security prevailed, award presenter and actor Gael García Bernal said he is “against any form of wall that wants to separate us.” Zootopia producer Rich Moore spoke of “tolerance being more powerful than fear of the other.” Candy, cookies, and doughnuts floated down from the ceiling three times on tiny parachutes, which meant attendees had no need to cry out, “Where’s my BISCUIT?” 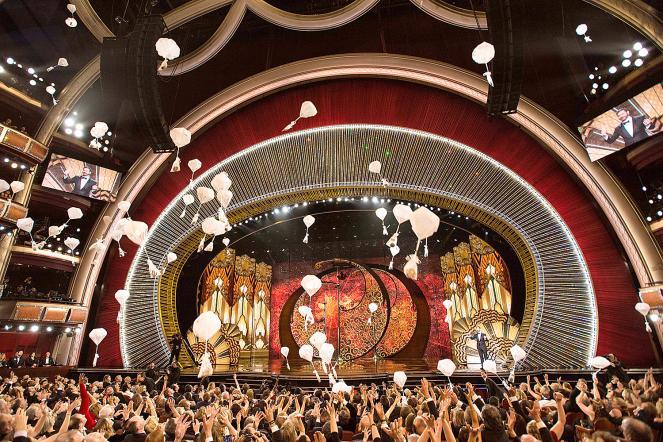 Cookies parachute from the ceiling at the 89th annual Academy Awards. AMPAS/SIPA/Newscom

Many Christians, of course, have for years criticized mediacrats and entertainer-savants. Thirty years ago I wrote a book with the then-controversial title, Prodigal Press: The Anti-Christian Bias of the American News Media. Between then and now most leading journalists, instead of doing their job as watchdogs, have been lap dogs during liberal administrations and attack dogs during conservative ones. Meanwhile, many leading professors have become propagandists. Many movie stars have seen themselves as philosopher-kings rather than court jesters.

The sense of entitlement is so strong that National Press Club President Jeffrey Ballou said Spicer’s Feb. 24 gaggle selectivity “harks back to the darkest chapters of U.S. history.” Darkest, really? Akin to whipping slaves and fighting a Civil War in which 600,000 died? But who will say that our media emperors have no clothes, especially when they look so good on the pre-Oscar red carpet?

In the late 1990s, while occasionally offering solicited advice to then-Gov. George W. Bush, I took a few minutes to tell him about University of Texas lunacy a mile from his home. Bush sighed and said, “I know, I know, but I can’t take on UT and win.” Given the sad demise of one governor a generation before who had tried and lost, Bush was right. Besides, he truly wanted to be a uniter, not a divider.

Now, look at consummate divider Donald J. Trump. He’s fighting a multifront war against major media, universities, entertainment industries, the legal establishment, Washington careerists, and others. Admirable, maybe. Audacious, certainly. Rolling Stone correspondent Matt Taibbi bashes Donald Trump in his crude new book, Insane Clown President, but notes that every previous candidate concluded: “If you want power in this country, you must accept the primacy of the press. It’s like paying the cover at the door of the world’s most exclusive club.” Now, an astounding change: “Trump wouldn’t pay the tab.”

So Trump, after his impressive speech to Congress on Feb. 28, entered March in a thoroughly modern version of the biggest story of 1813-1814: Could Napoleon defeat the combined armies of Russia, Prussia, Austria, Great Britain, Spain, and Sweden?