When disaster visits the vulnerable

Judie Shape (center), who has tested positive for the coronavirus but isn't showing symptoms, visits with her daughter and son-in-law through the window and on the phone at the Life Care Center in Kirkland, Wash., near Seattle. Ted S. Warren/AP

Jim Davis remembers one of the last games he played with elderly residents at White Oak Manor in Newberry, S.C., before the threat of the coronavirus largely confined the vulnerable population to their rooms for the foreseeable future.

On a pleasant afternoon, Davis—the facility’s activities director—led a group through a word game about flowers and pies. Between turns, the residents talked about their favorite blossoms. Some chatted about the tastiest desserts.

Visits from outsiders already were mostly off-limits because of growing concerns over COVID-19, but Davis could still gather residents for games and activities at the nursing home with some 136 residents.

Within hours of the word game, another word came down: Residents would mostly need to stay in their rooms as a protective measure against the coronavirus. No more communal meals. No more bingo. No more Sunday church services with local volunteers.

For more than 1.3 million Americans living in nursing homes across the U.S., similar quarantines are a blow to an already isolated population: Visits from family and outside groups—and time spent together during the day—can play a vital role in mental, physical, and spiritual health. For dementia patients, such visits can offer an important link to a fading world.

Like the rest of the world, this subset of the elderly population now faces complete uncertainty about when they might be together again—particularly as they face a virus especially dangerous for people over age 65. By March 21, at least 55 people in elder care facilities had died of the coronavirus, though authorities said the number is likely higher.

Meanwhile, millions of other elderly Americans are self-isolating at home. Many have limited networks of family, friends, or other social contacts to help provide for their needs. And those needs aren’t just for groceries or medicine. They’re also for basic companionship.

It’s an agonizing dilemma, including for Christians attuned to the Biblical teaching that pure and undefiled religion involves visiting the vulnerable in distress. In the dawning age of COVID-19, how should we then visit? Answering the challenge may take a combination of new technology, old-fashioned elbow grease, and creative efforts in the quest to reach to those in need.

For Davis and others like him, it will mean being an unsung family to vulnerable people for the long haul. He now carefully visits rooms, praying and reading devotional material with residents who desire it. He quotes the Scripture: “’Where two or more are gathered in My name, I am in their midst.” Davis adds: “Even if we are 6 feet away.” 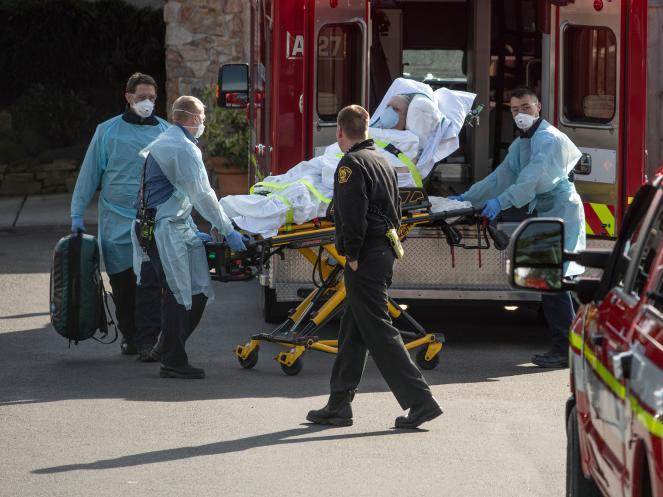 One of the gut-wrenching realities of the coronavirus is its threat to the elderly and other people with suppressed immune systems or underlying health conditions.

As Italy’s case numbers soared in mid-March, its early reports on the death rate for older people contracting COVID-19 were sobering: Some 13 percent of Italians in their 70s who had tested positive for the virus had died. The ratio hit 21 percent for those in their 80s.

Researchers were still unsure about accurate death rates among the elderly. Italy’s high ratios could reflect the unknown number of total cases in the country, as health officials clamored to gain more tests and screen more widely. But the insidiousness of the virus for older people was clear: Some 87 percent of those who died from COVID-19 were over 70.

COVID-19 isn’t a death sentence for every older American, but it is a clear threat, and much about the virus remained unknown as U.S. officials took dramatic steps (sometimes including government orders) to urge Americans to stay home as much as possible and to help older populations self-isolate.

As churches made tech-savvy plans for live-streaming worship, many also made old-fashioned phone calls to older or isolated members of the congregation: Do you have what you need? What can we bring you? Would you just like to talk?

Jamie Aten, the executive director of the Humanitarian Disaster Institute at Wheaton College, says thinking about how churches communicated 15 years ago will help congregants better stay in touch with older members who are less high-tech.

A consistent plan for regular phone calls and errand-runs will remain important. Churches can also look to connect with local public health agencies to understand what services they offer to older citizens, and to help them navigate those waters during long-term turbulence.

(And remember: Live-stream services won’t benefit populations without access to the technology to use them.)

Aten says the COVID-19 crisis is much more difficult because of a reality that hasn’t changed when it comes to disaster response: “All humanitarian aid is relational by its very nature.” That echoes the Biblical truth that millions of Americans are learning in a painfully acute way: “It is not good for man to be alone.”

What about those who are alone, and who don’t have social connections? How can the church find them?

The number in that category is growing: Between 1990 and 2010, the divorce rate among adults over age 50 doubled. That means fewer older Americans have spouses to help with their care. About 2 million frail, older adults are without children, and often have no natural caregiver to help them.

Another especially vulnerable population: grandparents who care for their grandchildren. More than 6 million children in the U.S. live in a home with a grandparent, according to Generations United. For some 2.4 million children, grandparents are the primary caregivers, with no birth parent living in the home.

The coronavirus poses an especially daunting challenge for many of those grandparents: How can they self-isolate and take care of children who may carry the virus without showing symptoms? There isn’t a slew of obvious answers, but outside help may be especially critical for them.

The National Volunteer Caregiving Network is a non-profit organization serving a half-million people who are older or have disabilities. Tammy Glenn, the group’s executive director, says most of those people don’t have a network of support around them and can’t afford to hire anyone to help them.

Chapters across the country match screened volunteers with local seniors who need help with basic tasks: grocery shopping, a ride to a doctor’s appointment, social visits, and other non-medical needs.

As COVID-19 began its rampage in the U.S., Glenn says the organization quickly started receiving more calls from seniors who needed help as they self-isolated. The importance of social distancing meant some tasks were no longer possible: Volunteers couldn’t give car rides or go into the homes of seniors.

But they could still make phone calls, and they could still make grocery drops for those who need it. That still held true as the crisis deepened. In California, Gov. Gavin Newsome requested all residents to leave home only for essential needs, but that didn’t apply to those taking critical supplies to vulnerable populations.

Indeed, the call for volunteers was rising, not going down. But those volunteers needed to be younger: The rolls of recent retirees who often serve older communities may find themselves in the category that needs to stay home as well.

Across the country, local citizens found creative ways to help neighbors. Some efforts might offer ideas to churches looking to connect with seniors in their communities. For example, the Maywood Community Association in Arlington, Va., formed a task force to seek out neighbors who need help.

The Washington Post reported that Michele Hansen made a map of the 400 houses in the neighborhood and left fliers on front doors. The fliers included information on how to ask for help getting food and essential supplies. Hansen assigned volunteers to take a territory to help manage requests. The fliers read: “If you are high-risk or end up needing to self-quarantine, know that your neighbors are here to help you.” 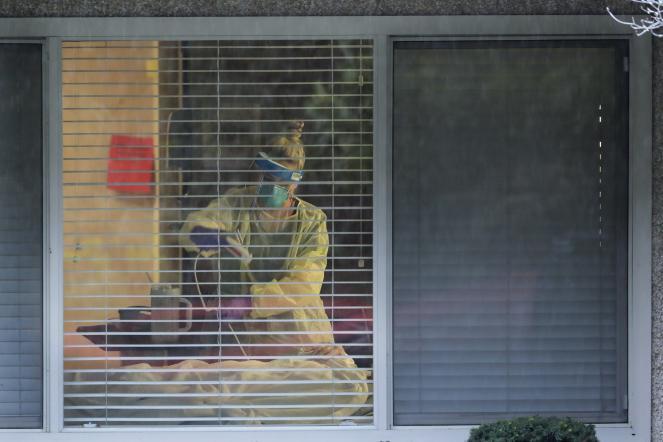 A nurse at a Life Care Center works in the room of a patient who tested positive for COVID-19. Ted S. Warren/AP

As church members organize and look for ways to help older people in their congregations and communities, nursing home staff members will become a lifeline for elderly residents in assisted living or long-term care.

Now in the midst of the COVID-19 isolation campaign, Jim Davis from White Oak Manor in Newberry arrives at the nursing home each morning and goes through a temperature check. He then goes through a protocol of handwashing before entering the halls of the facility. He calls the three main halls the “neighborhoods” of the home.

Though he can’t organize bingo or invite residents to come enjoy homemade ice cream, he can spend time carefully visiting residents in their rooms. He might read to them, bring them a cup of coffee, or chat. Sometimes he brings a game of ring toss. “Right now we’re trying to bring them comfort and familiarity,” he says.

That will be important in the coming months. Michael Bernardo, a physician who oversees medical care at four facilities in the area (including White Oak) says many nursing home residents already struggle with depression. He expects that to increase with increased isolation.

A few days into the beginning of the COVID-19 crisis, Bernardo says a resident with mental health issues began acting out and seemed confused. When he spoke with him, he learned the man was afraid of dying: “When I pressed him on it, it was all about the virus.”

The isolation will also be difficult for patients undergoing rehab at a nursing facility after a hospital stay. The doctor says family members often play a crucial role in helping those patients through the first days after their discharge from the hospital.

For now, Bernardo says it helps for nursing home staff to connect residents to their families through calls. In scenes unfolding at other nursing homes as well, family members stand outside windows of loved ones while they talk to them on the phone.

How long will that kind of interaction last? There’s no way to know. So far, the nursing homes he oversees hadn’t had a known case of COVID-19, but South Carolina reported its first coronavirus-related death at another nursing home in the state.

Davis—who has worked at the nursing home for nearly 23 years—says he tries to help the residents if they express fears. He hopes offering a reassuring presence helps: “We’re comforted that God knows us by name. So we just want to be there for them too—we want to say their name.”

He says many of the residents are already courageous: “We have a tough crowd. They’re flexible. They adapt.” Living constantly in a day-to-day setting, Davis says they’ve already learned what is so difficult for many of us: “Do not worry about tomorrow. Today has enough trouble of its own.”