In today’s wars, American troops face not one enemy, but three: jihadists, infiltrators, and lawyers

When Renee Myers picks up her Bible, she can still see crescent-shaped scars in the leather. They are fingernail marks, dug into the chocolate-brown binding in 2011. That was the year Myers sat in a military courtroom, gripping the Scriptures tight as she watched her son court-martialed and sent to the military prison at Fort Leavenworth for life.

In 2010, Myers’ son, Army Sgt. Derrick Miller, caught Atta Mohammed, an Afghan civilian, inside the perimeter of his U.S. base in northeastern Afghanistan. Mohammed had been stopped the day before on suspicion of escorting the enemy to a war zone. This day, Miller suspected the Afghan was reconnoitering his base, a common tactic in Afghanistan, where the Taliban pays ostensible noncombatants to infiltrate American posts and collect intelligence. Miller asked a superior for permission to question Mohammed, and received it.

First, the Afghan said he was there to perform electrical repairs. Miller, through an interpreter, asked Mohammed why he had no tools. The Afghan changed his story: He was going to work on the base plumbing. Miller asked again: why no tools? According to Miller and the initial testimony of an eyewitness, the Afghan grew frustrated then irate and tried to grab Miller’s gun. A struggle erupted, and Miller shot and killed Mohammed.

Miller said he acted in self-defense, but military prosecutors said he detained Mohammed intending to kill him. In 2011, Miller was convicted of premeditated murder and imprisoned for life. His mother has been fighting for his release ever since.

Renee Myers is among a vocal contingent of veterans, families of veterans, and civilian defense attorneys battling the fallout of “lawfare,” a term that refers to the growing tendency of military commanders to cede judgments about battlefield conduct to a growing cadre of lawyers who have never been in battle.

Air Force Maj. Gen. Charles Dunlap Jr. coined the term in 2008, the same year I first learned of Capt. Roger Hill, a young officer on trial for war crimes in Afghanistan (see “No good choices,” Jan. 31, 2009). I did not know then that I was observing the leading edge of a troubling trend. In all of World War II, Korea, and Vietnam, military judges convicted only seven soldiers and Marines of a “crime during combat,” or war crime, according to United American Patriots, a Virginia nonprofit specializing in the legal defense of U.S. troops. But since the war on terror began, more than 200 service members have been convicted of such offenses. Thousands more have received “nonjudicial punishment,” such as reduction in rank, forfeiture of pay, or brief confinement. 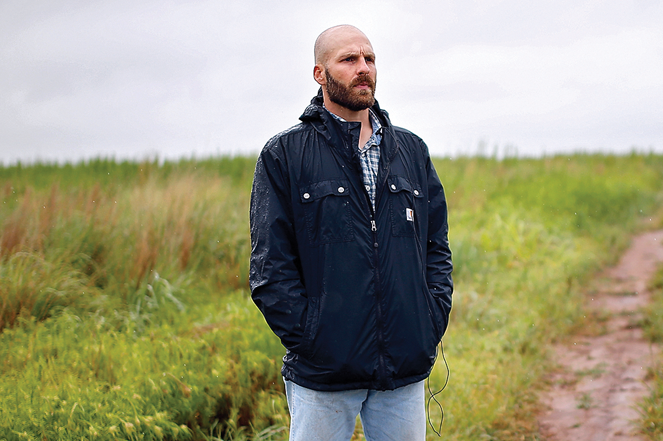 “Today, our soldiers and Marines are held not just to the laws of warfare, but to unprecedented standards of criminal law, even though they are operating in a combat environment,” said John Maher, a former Army attorney and current reserve lieutenant colonel who specializes in the defense of military accused. “Incidents that in the past would have been viewed as collateral damage in the ‘fog of war’ are now being prosecuted as war crimes.”

Texas defense attorney Colby Vokey, a retired Marine lieutenant colonel, considers some of these convictions just—as in the case of Robert Bales, for example. In raids on two Afghan villages in March 2012, the Army staff sergeant shot and killed 16 people, half of them children. Other Leavenworth prisoners, Vokey says, have been ground up in the lawfare machine, a bureaucracy that often seems more intent on securing convictions than justice.

In Derrick Miller’s case, for example, a witness independently corroborated his account—until Army criminal investigators threatened to charge him as an accessory to murder, at which point he changed his testimony. The Afghan interpreter who witnessed the shooting also refused to testify against Miller—until the Army offered him a U.S. visa in exchange.

Another case: Army 1st Lt. Clint Lorance. In 2012, on his second-ever combat patrol with the 82nd Airborne, Lorance ordered a gun truck to fire on three Afghans riding on a single red motorcycle toward the platoon’s exposed route of march—a tactic that had been used in the past to attack the platoon, which had recently lost three troopers. The truck’s rounds killed two of the riders while a third escaped. In 2013, prosecutors presented testimony from fellow soldiers who said that Lorance despised Afghans, and he was convicted of ordering the killing of unarmed civilians. After the trial, Lorance’s attorney, Maher, discovered that the DNA of all three riders resided in U.S. intelligence databases and linked them to bombs that had killed American soldiers. Lorance is serving 20 years in Leavenworth, and the case is on appeal.

In 2014, Army Lt. Michael Behenna was released from Leavenworth after serving five years on a 15-year sentence for the murder of Ali Mansur, a known al-Qaeda operative. Army intelligence believed Mansur had organized an attack on Behenna’s platoon in April 2008, killing two U.S. soldiers and injuring two more. Still, they ordered Mansur released. Behenna, who was ordered to return Mansur to his home, decided to field-question him to gain intelligence. According to Behenna, Mansur attacked him. Behenna shot Mansur twice, once under the armpit and once in the head. Army prosecutors charged Behenna with murder, saying he had executed Mansur in cold blood as he sat passively on a rock. But in a private meeting during Behenna’s court-martial, an expert witness told prosecutors that his analysis of the bullet entry wounds corroborated Behenna’s account. Prosecutors withheld this information from Behenna’s defense attorneys until after they had secured a conviction.

“I was infuriated,” said Michael’s mother, Vicki Behenna, who is an assistant U.S. attorney for the state of Oklahoma. “I immediately understood that to be a Brady violation.” 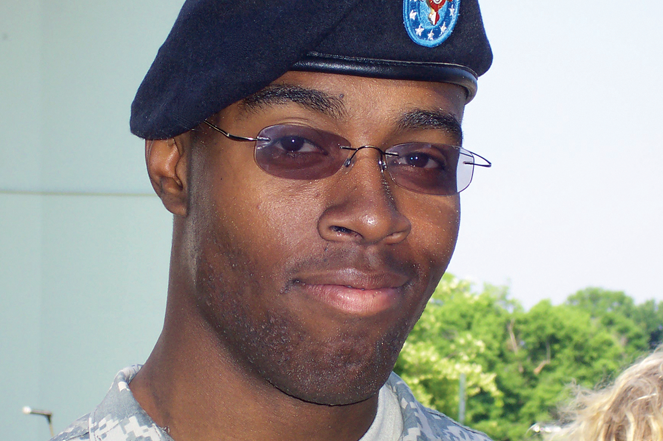 In Brady v. Maryland (1963) the Supreme Court held that prosecutors must disclose evidence favorable or exculpatory to a defendant.

Such blatant ethical violations raise a question: Why is this happening? As is the road to hell, the road to bureaucratic malfeasance is paved with good intentions. Post–World War II congressional reforms shifted the practice of military justice from unilateral punishment by senior commanders toward affording service members more due-process rights. These reforms necessitated more active-duty lawyers and investigators, and over the succeeding decades, their ranks swelled. At first, only senior commanders such as generals and admirals had attorneys—staff judge advocates (SJA), in military parlance—assigned to their staffs. Gradually, though, SJAs trickled down to lower echelons, while military law enforcement agencies, such as the Army Criminal Investigation Division and the Navy Criminal Investigative Service, sprang up to support them.

Today, it is the “convening authority,” usually a senior officer, who opens an investigation. The investigators and attorneys in charge of fact-finding work directly for that officer and receive their performance evaluations from him or her. This can create pressure “to find what the boss wants found,” said Neal Puckett, a civilian attorney and former Marine Corps trial judge. If a case proceeds to court-martial, the convening officer then picks the jury, all active duty.

“Although it’s never spoken aloud, the jury is aware that by the time a case reaches court-martial, the colonel or general has already decided there is sufficient evidence that the accused is at least guilty of something. So what you have when you walk into a military court-martial is the actual presumption of guilt.”

In that 2006 case, seven Marines were charged with murdering 24 unarmed civilians in Haditha, Iraq. Charges against six defendants were dropped. The seventh defendant, Staff Sgt. Frank Wuterich, was convicted on a single charge of negligent dereliction of duty. Regardless of legal outcome, the watershed case represented the first time military prosecutors charged not only troops on the ground, but also their battalion’s commander, SJA, and intelligence officer. 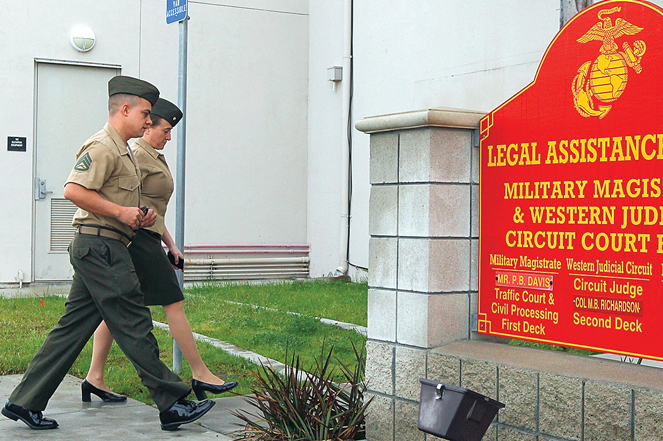 Staff Sgt. Frank Wuterich (left) arrives with his attorney for a court session at Camp Pendleton in 2012. Associated Press/Photo by Chris Carlson

“Senior officers were getting formal training based on Haditha even before the facts came out,” said Vokey, who defended Wuterich. “Throughout all the armed forces, the message became, ‘Look, if there’s an allegation, you’d better prosecute, or you yourself will face prosecution.’” That training is now more than a decade old, and there’s been nothing to change it.

Today, the number of war crimes cases across the services has lulled with the drawdown in terror-war troop strength. But with President Trump considering putting more boots on the ground in hot spots from Afghanistan to Syria to Korea, such cases will likely spike again without additional reform.

Meanwhile, Renee Myers girds herself with prayer and soldiers on. With Derrick Miller’s legal appeals and commutation efforts exhausted, she is now trying to rally support on Capitol Hill. The day Miller was remanded to Leavenworth, Myers sat with him in a holding room and vowed, “As long as there is breath in my body, I will never stop fighting for you.”

He gazed back at her, his eyes clear and fearless. “I know, Mom,” he said.

“Every time I think I’m going to be crushed by the weight of this, I remember that day,” Myers says now. “I remember that look of total trust, and I know I have to keep fighting.”

—Lynn Vincent is a U.S. Navy veteran, a WORLD senior writer, and co-author with Capt. Roger Hill of Dog Company: A True Story of American Soldiers Abandoned by Their High Command (Center Street, April 2017). Read an excerpt of Dog Company in this issue.

Military lawyers are not our "enemy" and to compare them to "jihadists" and "infiltrators" is just plain wrong. (Headline's subtitle: "In today’s wars, American troops face not one enemy, but three: jihadists, infiltrators, and lawyers")

During the last 16 years of war, military lawyers have sworn to protect the U.S. Constitution and have voluntarily gone into harm's way while their spouses have raised their families alone during long absences. Its just plain wrong to attack them as trying to defeat America.

In the end, Commanders run the military justice system because Congress has legislated that Commanders are solely responsible for the good order and discipline of their units--not lawyers. Commanders convene the courts, Commanders refer the charges to the courts, and Commanders approve the convictions and sentences.

Ms. Vincent wants to make the point that Commanders are listening to their lawyers too much, and used Haditha as one among several examples. However, General Mattis was the Commander who convened the Haditha courts-martial, and few people are going to be persuaded that General Mattis was cowed into submission by his military lawyer or that he is an enemy of America. So lawyers make a more convenient target, but accountability lies with Commanders.

With this very possible and horrible outcome, who would volunteer for duty today?