Donald Trump made gains among some Hispanic voters in 2020. Will the GOP continue the trend?

Trump supporters drive in a demonstration organized by Cuban exiles in Miami on Oct. 10. Gaston de Cardenas/AFP via Getty Images

As Rosie Paulsen knocked on doors of voters in Tampa, Fla., last fall on behalf of former President Donald Trump, she often ran into a familiar attitude among Hispanics who answered: Politics was among the trinity of “taboo” conversation topics, along with money and religion.

She’d don a “Trump-Pence” shirt or one that read “Latinos for Trump,” along with Wonder Woman–branded pants and a stars-and-stripes-­covered ­cowboy hat. “I think I wore that hat more than anything in the campaign … that was kind of my ­signature,” Paulsen said with a laugh. “They all loved it.”

Paulsen ­immigrated to the United States from Ecuador as a 17-year-old with her parents and two siblings in 1988. Starting her own health insurance brokerage company got her interested in ­politics: “Laws passed directly or indirectly affect you and your business. That’s when I started diving into politics.”

In July 2020, the Republican National Committee asked Paulsen to run the Latinos for Trump Coalition in Tampa. She called the request “one of the biggest honors of my life as a naturalized citizen.”

She only had four months to ramp up outreach. COVID-19 caused the group to scrap phone-banking parties in which volunteers crammed together for hours. But she and 793 volunteers knocked on around 40,000 doors, individually made 40,000 phone calls in Spanish, and registered 172 people to vote. 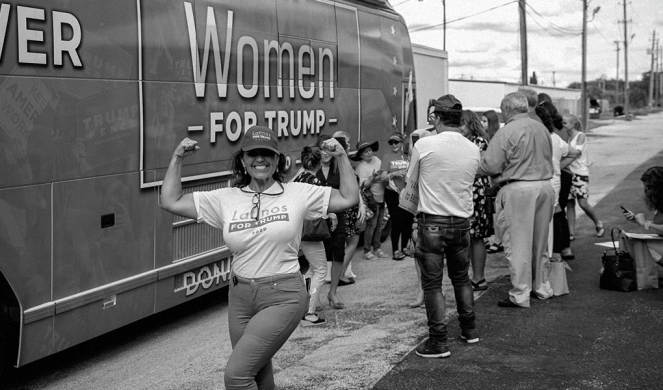 Rosie Paulsen at a campaign event in Tampa. Scott Paulsen

Paulsen saw Trump’s increases among Hispanic voters in Florida coming, but it surprised others. Hispanic voters overwhelmingly favored President Joe Biden, but Trump managed to chip away at some former Democratic strongholds, particularly in Florida and Texas. Trump’s backing among Hispanics grew from 28 percent in 2018 to 32 percent in 2020. That lopsided margin still favors Democrats. But some Republicans see a window of opportunity to regain levels of Hispanic support not seen since 2004.

In 2016, Trump won about 38 percent of Florida’s Hispanic vote. But 2020 exit polls showed that figure had jumped past 50 percent. Biden won liberal Miami-Dade County by only 7 percentage points—a county Hillary Clinton had won by 30 points in 2016.

Biden also bled support in south Texas, along the U.S.-Mexico border. Trump flipped Zapata County, near the Rio Grande Valley, from blue to red. The county is around 93 percent Hispanic.

Trump spent the months leading up to the election executing a focused, on-the-ground strategy in Florida. Can Republicans sustain those gains among Hispanic voters while cutting losses with them in other parts of the country? Some say yes, if the GOP focuses on key issues impor­tant to the growing voting bloc.

REACHING HISPANIC VOTERS will only grow in importance for both political parties. Ahead of the 2020 presidential election, Pew Research Center projected that Latinos—13 percent of all eligible voters—would be the largest ethnic or racial minority voting bloc, surpassing black voters for the first time: 32 million Latinos would be eligible to vote (compared with around 30 million black voters).

In key states like Arizona, Nevada, Florida, and Texas, Hispanics make up nearly 20 percent of the electorate.

A majority of Hispanic voters support Democratic candidates, but about one-third have voted for Republican presidential candidates since 1972. The GOP’s high point came in 2004, when George W. Bush won 40 percent of the Hispanic vote (up from 35 percent in 2000).

During his presidency, Bush’s messaging sought to appeal to Hispanics with socially conservative values of faith, family, and work. The former Texas governor also appointed Hispanics to key positions as governor and as president. He also exerted time and political capital to reform immigration laws. (Conservative Republicans in Congress ultimately stymied those efforts.)

Samuel Rodriguez, president of the National Hispanic Conference, thinks Hispanics’ support of the GOP could surpass Bush’s numbers if Republicans are willing to address immigration reform.

“Republicans can compromise, can come together with Joe Biden,” Rodriguez said. “They can say, ‘We’re not going to give you amnesty but are going to give citizenship to dreamers.’” Dreamers are immigrants for whom the Obama-era Deferred Action for Childhood Arrivals program delayed deportation after their parents brought them to the country illegally. The Supreme Court blocked Trump’s efforts to end the program. 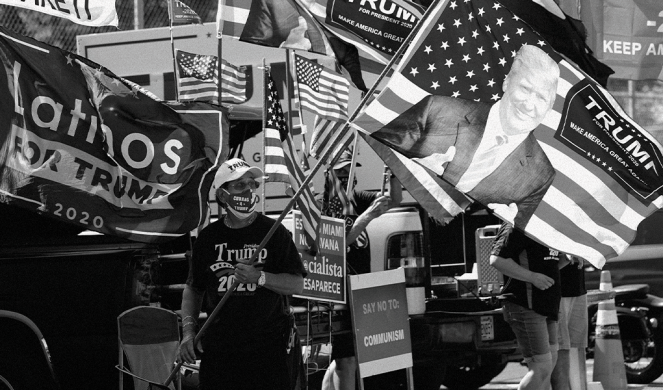 WHEN PAULSEN CANVASSED the Tampa area in 2020, residents often opened the door when they saw she represented Trump but hesitated to discuss the election. “I’d ask them: ‘Are you better off than you were four years ago, economically-wise?’”

She and others say the economy is key to capturing the Hispanic vote.

Drug cartel violence drove Cesar Grajalas and his father Javier to immigrate to the United States from Colombia 20 years ago. His parents ran a sewing business but had to sell their machines to pay debts. Javier bought one-way tickets to Miami for Cesar and himself, and they arrived with $80 in cash.

A family friend who managed a bakery allowed the two to stay at her home for a week. Grajalas helped the woman cook and clean. “She asked, ‘Can you bake cookies?’ I say yes, and I’d never baked cookies in my life.”

Members of the local Catholic parish helped them find work landscaping, cleaning and painting houses, and working construction. Three months later, they had enough to bring Cesar’s mother and sister to Miami.

After a year of saving, they bought two sewing machines. Then a few years later they opened a small luxury fashion studio in downtown Miami.

From his parents’ example, Grajalas learned that “our community will find a way to continue to be [entrepreneurs].”

Grajalas eventually connected entrepreneurial values to conservative politics and now works for the LIBRE Initiative, a sister organization to Americans for Prosperity that focuses on promoting conservative economic ideas among Hispanic communities.

Grajalas believes Trump grew his support among Hispanics because of the perception that he could handle the economy better than Democrats. He’s not alone.

Ruy Teixeria, a left-leaning political scientist, said in a post-election analysis that Democrats bled support among Hispanics for misjudging issues they cared about. Instead of immigration and racial tensions, they should have focused on upward mobility and jobs.

“This is a population that overwhelmingly wanted to hear what the Democrats had to offer on jobs, the economy and health care,” Teixeria wrote. “But the Democrats could not make the sale with an unusually large number of Latino voters in a year of economic meltdown and coronavirus crisis.”

Grajales thinks Hispanics associate a propped-up economy with socialism, a system many came to the United States to escape: “We don’t want that here.” 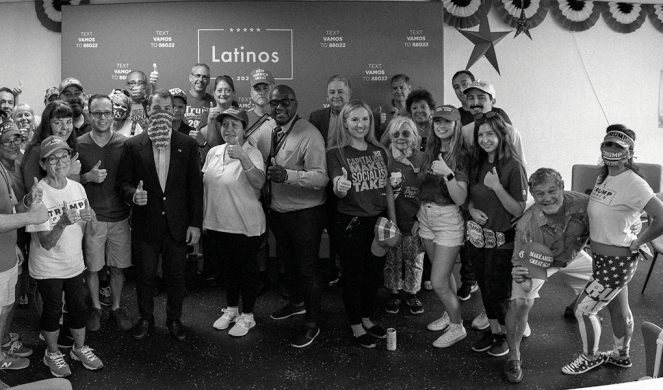 THE ECONOMY ISN’T the only appeal Republicans made to Hispanics in 2020. They also doubled down on cultural and religious conservatism.

Paulsen, whose husband is a pastor, said many Hispanic pastors she knows in Tampa preached sermons on how “the Bible says marriage is between a man and a woman, the Bible talks about the sanctity of life in the womb and until the end of life” and asked congregants how they could support the Democratic Party given its position on abortion. “Those two things right there are huge in the Christian conservative Hispanic community,” Paulsen said.

Ashley Verdugo works for for the Christian Family Coalition (CFC) Florida, which highlights abortion, religious liberty, and marriage. Those issues resonate with many of the churchgoing Hispanics the group reaches.

The organization distributes English and Spanish voting guides on national elections, county commission races, and everything between. Verdugo’s father founded the organization 18 years ago, and they’re now involved in local races in six counties surrounding the Miami-Dade area. The group worked with Trump in 2016 and has continued to focus on increasing support for pro-life, pro-family, pro-religious-freedom candidates.

“For all his faults, Donald Trump was able to get Latino voters, and if Republicans want to move forward, they can’t just let that go to the wayside,” Verdugo said.

Some of those faults may be why Trump didn’t get more Hispanic votes. During and after his first campaign, Trump implied many immigrants, particularly from Mexico, were “killers and rapists.” He won election in 2016 as an immigration restrictionist, then allowed a federal government shutdown in an attempt to secure money to build a wall on the U.S.-Mexico border. His administration faced mounds of criticism for its family separation policy at the border.

“Don’t take the Latino vote or whatever gains you’ve seen for granted. ... The R or D next to your name is not going to guarantee a Latino vote.”

But by 2020, Trump had in some ways softened his focus on immigration and the border wall and shifted to the economy, “law and order,” and countering socialism. Some organizers said part of Trump’s appeal to some Hispanics was his brash approach.

“He’s not trying to sugarcoat, not trying to talk politically,” said David Casas, a former GOP member of the Georgia House of Representatives who now works with LIBRE.

Casas’ parents fled Cuba for Spain and eventually made it to the United States when Casas was 2 years old. His father, who had studied to be a doctor, worked as a waiter instead to provide for his family. Years later, Casas became the first Hispanic elected to the Georgia Statehouse as a Republican.

CASAS SAYS BOTH Republicans and Democrats will make a mistake if they ignore one key element: diversity among Hispanics.

Biden won more support in some states with large Hispanic populations: Arizona, California, Nevada, and New Mexico. Trump’s restrictionist immigration policies and rhetoric likely hurt him among higher concentrations of Mexican immigrants in places like Arizona, where he received 37 percent of the Hispanic vote there.

In Arizona, Trump was also likely hurt by his association with Joe Arpaio, who served as the sheriff for metro Phoenix for 24 years. Trump pardoned Arpaio in 2017 after the sheriff disregarded a judge’s order in a racial profiling case. Arpaio was a prominent supporter of a restrictive immigration law, S.B. 1070. The Supreme Court struck down the controversial “show me your papers” law in 2012. Local Hispanic organizers pointed to the outrage as a reason for growing turnout among Hispanics voting for Democrats.

For other Hispanic communities, like Florida’s heavy concentration of Cubans who came to the United States under different circumstances, the immigration policy issue may not matter as much, according to Mario Lopez, president of the Hispanic Leadership Fund.

The GOP will have to figure out whether it can build upon the support of Hispanic voters in future elections or if 2020 was a result of the Trump factor.

“From the conversations I’ve had, it is Donald Trump,” Casas said.

He offered a warning to lawmakers and organizers: “Don’t take the Latino vote or whatever gains you’ve seen for granted. … The R or D next to your name is not going to guarantee a Latino vote.”