Pathways Academy seeks to build boys into ‘men of honor’

It was 9 a.m., and the seventh-grade boys at Pathways Academy were filling out a worksheet on Red Scarf Girl by Ji-li Jiang, a memoir of the Cultural Revolution under Mao Zedong. When they finished, one of the boys passed out a local newspaper, The News-Times, for them to read during the few remaining minutes of class. Posters they made from other books they had read, like To Kill a Mockingbird, hung on the wall.

The bell rang and the students filed out of class, shaking their teacher’s hand. The founders of Pathways Academy—a Christian all-boys middle school in Danbury, Conn.—designed each classroom to fit no more than 12 students to ensure that each student receives a lot of attention.

The academy enrolled 39 boys in 2017-2018. They all met several criteria for being “at-risk”: They’re below the poverty line, and many have a single parent. Parents pay a small portion of tuition—$75 to $200 per month—based on family income.

In 2008 business executives Bill Beattie and Cedric Rice started the academy as an affiliate of Jericho Partnership, the Northeast Region winner in our 2018 Hope Awards for Effective Compassion coverage. The school receives most of its funding from Jericho, and Rice became principal, leading the school until recently—and he still teaches math and science. 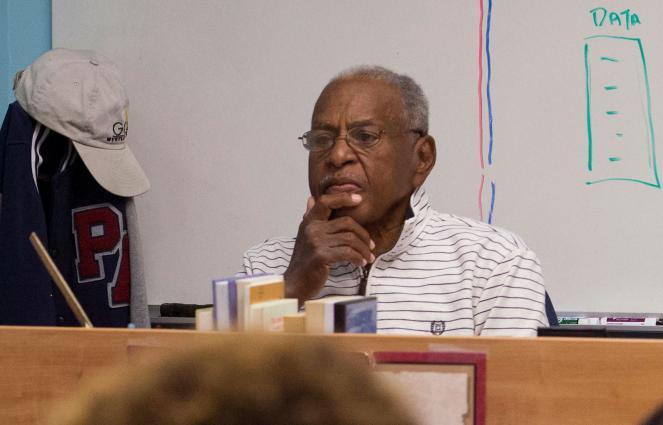 Both Rice and Jericho President Carrie Amos emphasized how difficult it has been to sustain the school financially over the last 10 years, especially in hiring staff in a place with a high cost of living. They had support in the early years from the superintendent of Danbury Public Schools, Sal Pascarella, who served on the Pathways Academy board for three years, offering the fledgling school advice and help in finding the right government contacts for things like certification.

“I saw another venue for helping students in a way my schools could not,” said Pascarella. “They needed more structure, smaller communities.” Pascarella has made sure his at-risk students know about the Pathways programs too. He still stops by regularly, and said the school can contact him whenever it needs assistance.

“When you do well here, you do well everywhere,” said Rice, who remembers one boy whose dad was in prison and whose mom worked the graveyard shift at the hospital. The boy would get his toddler sister ready every morning, and then come to school. He never missed a day, according to Rice. The boy recently graduated from college. (As Rice told this story, someone came to the lobby with news: Another Pathways graduate had just gotten a full lacrosse scholarship to attend a college in New Hampshire.)

If the Pathways boys make honor roll, they can wear a special hoodie over their uniforms in a color of their choosing, with an honor roll patch on the arm. Boys in teal, brown, and yellow hoodies dotted the classrooms. “We want these boys to do academics well,” said Amos. “But are they men of honor? Are they breaking the cycles of poverty and addiction? … We’re not the prep school.” 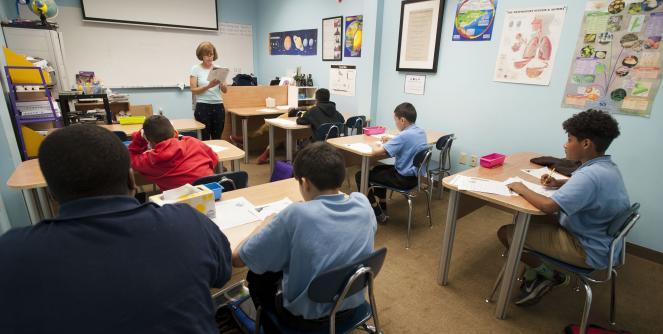 Per the Pathways creed, which spells out the acronym of “Christ,” men of honor are: Courteous & Respectful, Hopeful & Confident, Resourceful & Goal-Committed, Inspired & Close to God, Sexually Pure, and Trusting in the Lord.

To that end, many of the boys are in the affiliated mentoring program through Jericho. Mentees who stick with the program have access to a $10,000 grant that matures five years after they graduate. The grant is not for college, but for big life expenses, like buying a car or even paying for a family member’s funeral.

Down the hall, the next class was starting. History teacher John-Paul Vega was prepping a group of eighth-grade boys to write a five-paragraph essay defining “charisma” and how Adolf Hitler’s charisma led Germany into war. Since the beginning of the year he had been teaching them how to construct an essay outline. Now was the culmination: writing the essay for the first time.

Vega helped the students look up examples of sources using school-owned iPads. He reminded them, “Don’t quote anything you don’t understand.” After they talked a little about the Germans’ desire for a strong leader after World War I, Vega broadened the conversation.

“What’s an example of someone charismatic, but who didn’t use it for a negative thing?” asked Vega. Someone who is kind, suggested one boy. Another asked if “cleaning your room without your mom asking” was charismatic. A student turned and answered him, “That’s called initiative!”

As they talked, some boys were already typing up their essays on the school iPads.