Understanding the World Books of the Year: Short List

When Chinese officials executed Lin Zhao in 1968, it seemed they had silenced the outspoken counterrevolutionary. Yet in 1981, a judge returned to her family hundreds of pages of writings Lin penned with ink and her own blood from prison. The Christian poet, journalist, and dissident, killed at age 36, became a hero among Chinese democracy activists. Author Lian Xi describes how Lin lost faith in the Communist Party and returned to the Christian faith of her youth, and how her religious convictions compelled her to keep fighting for justice. —Angela Lu Fulton

With more member states than the United Nations and control of arguably the most popular sport in the world, FIFA inevitably would become the playground of kleptocrats. How the Zurich-based international football federation turned sports into brand franchises worth millions of dollars is part of Red Card’s buildup. How the FIFA bribery scandal involved world leaders, business titans, and celebrity players is the beating heart of investigative journalist Ken Bensinger’s book. That it became one of the largest cases in U.S. Justice Department history is why even soccer nonenthusiasts want to read on.

The End Of Epidemics

Family physician and health specialist Jonathan D. Quick—an expert in medical work in the world’s hot spots—has a strategy for tackling the next pandemic so the rest of us can sleep at night. Part action thriller and part deep-think prescription, The End of Epidemics isn’t shy about criticizing doctors who play God as well as government bureaucracies, including Quick’s own World Health Organization. For those in front-line healthcare, it’s a must-read.

The Desert And The Sea

Journalist Michael Scott Moore wrote a comic novel and a book on surfing before research for a book on Somalia got him kidnapped by pirates and held for a $20 million ransom. Moore’s fast-paced tale of learning the rules of the Indian Ocean and of his Muslim captors is a window into the forgotten “conflict” of high-seas piracy. His own personal voyage of discovery—aided by a Catholic captive from Seychelles named Rolly in possession of a beat-up Bible—draws purpose out of the danger. 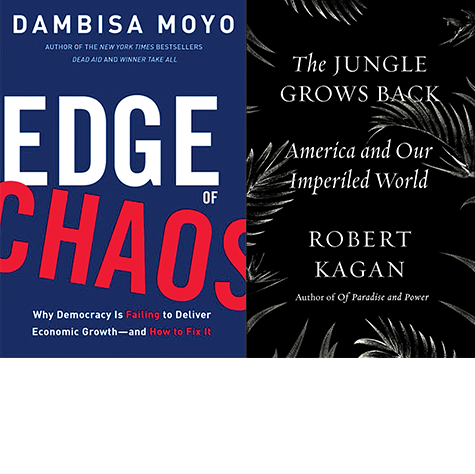 The Jungle Grows Back

Two leading thinkers have tried to cut through a shifting fog of agendas and alliances.

In Edge of Chaos, economist Dambisa Moyo confesses that “politics, and not economics” drives human prosperity, and argues that a country’s economic growth lies in the strength and breadth of its institutions: She warns against government growth.

In The Jungle Grows Back, Robert Kagan points out that the American-led liberal order of the last century is an aberration, and not the work of evolution and human desires. The story of man “is a long tale of war, tyranny, and poverty,” he writes, yet somehow he (like Moyo) marshals the data to tell us good news about the world we live in now: Inventions reach billions, doctors fight disease, and great powers aren’t fighting. Such macro perspectives help remind us peace isn’t the natural order under the sun: Chaos is.

(Please read the next section in our 2018 Books of the Year issue: “Crises R Us”)