When Brad and J.J. Jacob adopted their youngest daughter, Joy, at age 4, doctors expected her only to survive for one year. Joy has the rare medical disability late infantile metachromatic leukodystrophy, which only about 300 people on the planet have. “It basically means that the white matter of her brain is dissolving,” explains Brad Jacob, who is also a constitutional law professor at Regent University School of Law.

Today Joy is 9 years old. She takes formula and medications through an intestinal tube because she can’t swallow. She can’t speak. She can’t move much except to wiggle her hands a bit, Jacob said. But she can smile and laugh. She knows her family, including the four big dogs. And she’s very happy. That’s why they named her Joy, Jacob said: “She’s a delight.”

Joy can’t be vaccinated against COVID-19 because she is under 12. Even if she were old enough, her parents aren’t sure they would get her the shots due to her fragile condition (they did vaccinate their two other special needs kids.)

“We can’t take risks with her,” Jacob said. “So we try to keep her safe.” Joy has a team of caregivers who assist from 9 a.m. to 9 p.m. every day. They prefer to hire fully vaccinated caregivers, but the tough labor market limits their options. Some of Joy’s caregivers have been vaccinated, some have not.

The Jacobs are firm with masking rules and trust their caregivers to track possible exposure to the virus. Even though the Jacobs have chosen to vaccinate themselves and their older children, Jacob said he understands some people have legitimate concerns or convictions. As the world navigates the uncharted waters of this pandemic, he believes Christians need to extend one another a lot of grace and a lot of love.

One Christian with concerns is Whitney Buck, an OB-GYN in Michigan. When her employer mandated the COVID-19 vaccine, she and her husband, Taylor, a physician at the same hospital system, sought a religious exemption. “As believers, we trust the leading of the Holy Spirit and decided it was medically not indicated or necessary for us.” They are young, healthy, and low-risk for morbidity or mortality if infected. She said they didn’t want to take on the risk of side effects, no matter how infrequently they are reported. She also said the push for mandates by the media and politicians gives them pause.

Both Whitney and Taylor received an automated email response from their employer denying the exemption. They requested an explanation, but have not received one. The Bucks are praying about what to do next. “I felt from a very young age that the Lord prepared me and equipped me to be a physician,” she said. “I do not want it to be my pride that costs me my vocation.”

As Christians make decisions about how to keep their families safe while respecting others’ decisions, these struggles are playing out all over the United States, especially as the government and businesses begin to require workers to get the vaccine or risk losing their jobs. Some, like the Bucks, have sought religious exemptions to vaccine mandates, while those who have been denied are filing lawsuits against schools, hospitals, and state governments.

To help navigate the complexities of religious exemptions and vaccine mandates, WORLD has compiled an explainer examining what legally qualifies as a religious exemption and how government employers and private companies may respond.

Biden also announced the U.S. Department of Labor’s Occupational Safety and Health Administration (OSHA) will issue a rule on vaccine mandates for the private sector requiring businesses with more than 100 employees to mandate that their workers get the vaccine or submit to regular testing.

Has the OSHA rule gone into effect yet? No, but some employers have already taken the step on their own. In the private sector, many healthcare facilities and restaurants—where workers come in contact with large numbers of people—require employees to get a vaccine, said Mark Chumley, a partner at Keating Muething & Klekamp who specializes in labor and employment law. In the public sector, state universities have been leading the way.

Before this directive, OSHA had recommended, but not required, employees get vaccinated. The Equal Employment Opportunity Commission (EEOC) has said employers that do issue mandates must comply with discrimination laws.

For those working for the federal, state, or local government, what determines whether an employer will grant a religious exemption? Legally, a constitutional law analysis will apply. The First Amendment states: “Congress shall make no law respecting an establishment of religion, or prohibiting the free exercise thereof.” Courts have interpreted the word “religion” to mean a sincerely held belief. “You have to demonstrate you have a system of moral or ethical beliefs that are important to your life,” said Barry McDonald, a constitutional law professor at Pepperdine University Caruso School of Law.

That doesn’t mean a person needs to believe in the God of the Bible, adds Jacob. You don’t even have to be part of a group that shares your belief, he said. “It’s not a question of whether your belief is right or wrong. It’s whether you really in your heart of hearts hold it and believe it.” 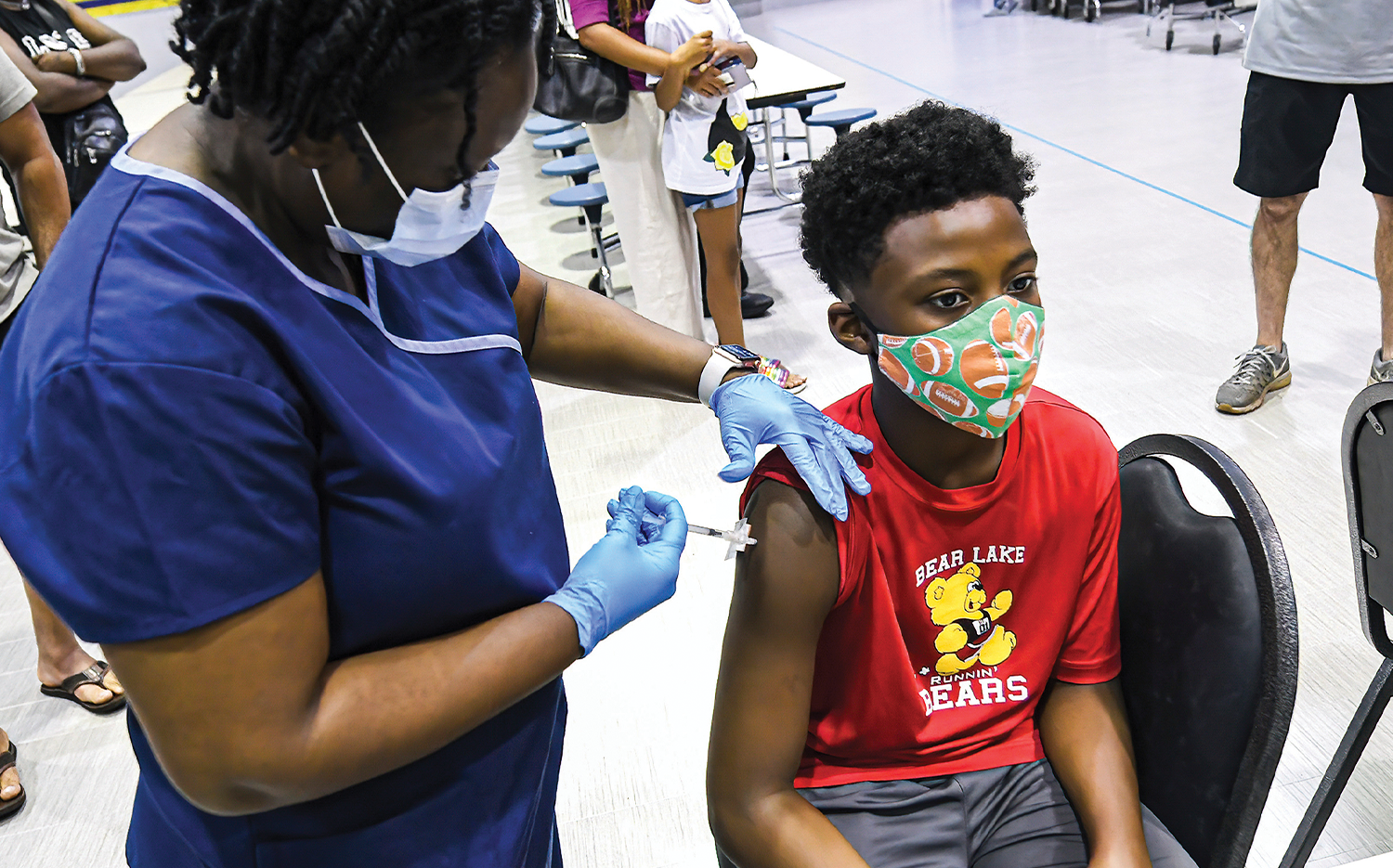 A nurse gives a dose of the Pfizer vaccine to a 12-year-old boy at a COVID-19 vaccine clinic at Lyman High School in Longwood, Fla., on the day before classes began in August. Paul Hennessy/SOPA Images/Sipa via AP

Can that encompass any beliefs? If a ­religious belief is too far-fetched, the government will have trouble accepting it. For instance, Universal Life Church ordained millions of people as ministers by mail request and encouraged them to declare themselves tax exempt. The courts denied the exemption and held that such a claim was simply a tax dodge. On the other hand, a 1972 Supreme Court case allowed the Amish to claim a religious exemption from a state law that required kids to attend public school until age 16. The Amish parents sincerely believed their kids should leave school to work on the family farm after eighth grade.

Ultimately, the employers will be the ones tasked with discerning if an individual’s ­religious belief is asserted in good faith, McDonald said. A note from a pastor or documentation pointing to principles of faith shouldn’t be required. But many people use that type of evidence for support as tangible proof that getting a vaccine goes against their religious beliefs. “You can kind of build a case and say, ‘Look, here are these well-­respected Christian writers who have made the same arguments,’” Jacob said.

If a government employer denies a religious exemption, does that violate the free exercise clause in the First Amendment? The Supreme Court has decided only two cases challenging the denial of objections to vaccine mandates. The court upheld the vaccine requirement in both instances, but neither case specifically addressed religious exemptions. Instead, they involved a bodily integrity objection—the right to self-determination of the body—under the due process clause. Also, the cases date to the 1920s, decades before the development of modern-day religious liberty law.

By the 1980s, courts took religious exemption claims to secular laws more seriously. The court applied a tough standard of review known as strict scrutiny: Under strict scrutiny, the government must prove there is a compelling state interest to deny the exemption, and even if it finds one, it must then apply the law by the least restrictive means.

But the free exercise clause has been on shaky ground since 1990 when the U.S. Supreme Court heard a case raised by two members of a Native American church who sought a religious exemption from a law banning the use of peyote, a plant classified as a hallucinogen. Instead of applying the strict scrutiny test, the court held that religious beliefs don’t excuse a person from compliance with a generally applicable secular law.

But the law continued to evolve. And a few years later, Congress enacted the Religious Freedom Restoration Act (RFRA), which restored the Supreme Court’s strict scrutiny approach to the free exercise clause. Only the federal government is bound by RFRA, while state laws vary.

“A pandemic is a pretty decent argument about compelling state interest, so even if we’re playing the strict scrutiny game it’s not a sure thing,” Jacob said. Still, he adds, the least restrictive means may translate to offering testing opt-outs or other alternatives.

What about the legalities of a religious exemption in the private sector? Title VII of the Civil Rights Act of 1964 governs most employers. That prevents religious discrimination in the workplace. Again, the first step will require the employer to determine the sincerity of an employee’s belief, said Chumley, the labor law expert. “The EEOC views religious belief very, very broadly, so it doesn’t necessarily have to follow the established tenets of a religion.”

For example, a member of the Catholic Church doesn’t have to be in line with Catholic doctrine. Even though Pope Francis has encouraged the vaccine, a Catholic can still have a different legitimate religious belief, which the legal standard could still cover. Chumley says it’s difficult for an employer to say an employee’s belief is not genuine except in cases of fraud.

But even if a private employer determines the belief is sincere under Title VII only requires the organization to make a reasonable accommodation (an employer doesn’t have to accommodate if doing so would be an undue burden). That requires case-by-case evaluations, Chumley said. An employee who objects to the vaccine mandate might prefer an accommodation to work from home. The employer may reject the request and require the employee to come in to the office, submit to weekly testing, wear a mask, and practice social distancing.

What should employers do? Chumley said some employers have taken the position that there are no reasonable accommodations for not getting the vaccine. Chumley, who advises employers, believes that’s a mistake. “All the regulation and guidance from the EEOC contemplates a one-on-one dialogue, meaning let’s analyze this for each individual person.” He encourages employers to engage, look for feasible alternatives, and document the process.

Jenny is a WORLD Radio correspondent and co-host of the Legal Docket podcast. She is a graduate of the World Journalism Institute and Pepperdine University Caruso School of Law. Jenny resides with her husband Ron in Alexandria, Va.