In this year of battles between Pro-Trumpers and Never-Trumpers, Os Guinness has thoughtful observations that can benefit both camps. Guinness writes, “The present obsession with President Trump, whether supporting or opposing him, is a massively distorting factor for a simple reason: Donald Trump is the consequence of the crisis and not the cause.”

This sociological analysis from Guinness fits well alongside the economic analysis of Cass. As Guinness says, “The crisis created the president … Trump’s election was like a giant wrecking ball that stopped America in its tracks, and it allows space for Americans on all sides to consider where they see the republic now, and where they think it should go.”

Guinness, comparing the successful American Revolution with the murderous French Revolution and its Marxist progeny, thinks we should choose “1776 and the classical liberal freedom of its founding,” and not “1789 and the Left/liberal freedom of today.” The visions of freedom compete in many ways: For example, Christians tend to believe in a created order (with males and females) while materialists believe in an always-fluid, socially constructed order.

Academic and media materialists have shown open animosity toward America’s religious past and present—and frustration with all that created the Trump presidency.

Here are two inspiring stories of immigrants to America with vastly different backgrounds—a resident of Somalia who loved Western dance moves and became known as Abdi American, a pro-democracy protester from south China who escaped and started from scratch in Queens. The common denominator: a desire to work hard and a willingness to take risks to gain freedom. Iftin’s autobiography ends, “I hope that my own example reminds people of what’s possible.” Hilgers ends her biography of Zhuang Liehong with one woman noting that immigrants’ children often “don’t know whether they’re Chinese or American.” Zhuang’s wife, Little Yan, replies, “It’s simple. They’re Americans.”

Sen. Ben Sasse, R-Neb., has criticized Donald Trump’s flamethrower rhetoric, but he agrees with Os Guinness that the president did not cause the fire: “He simply plays the fiddle ‘better’ than anyone has ever managed before.” To cut down on fire-prone underbrush, Sasse emphasizes commitment to parenting (the Goodnight Moon Gap) and local community, and limits on using technology and exposing ourselves to fake news. He recognizes the importance of rebuilding honest journalism and offers a crucial understanding: “Moral dilemmas can’t be resolved by a computer. More quantitative power doesn’t inexorably solve fundamentally qualitative problems.” 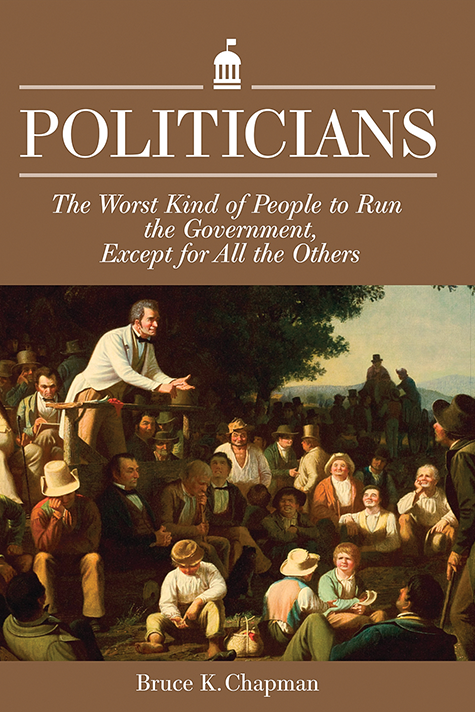 When frustrated by election results, it’s useful to remember why it’s hard to live with politicians but even harder to live without them. Politicians: The Worst Kind of People to Run the Government, Except for All the Others offers warm wit seasoned with some sharp-edged anecdotes that show how the growing influence of “middlemen”—including activists and Big Media—has obstructed the deliberative process and created a kill-or-be-killed atmosphere.

The flourishing of lobbyists does not surprise Chapman, who quotes Paul Douglas—a realistic Democratic senator—saying in 1952, “Whenever government controls a business, it becomes inevitable that the business should try to control the government.” Chapman proposes re-democratizing elections by giving a 50 percent tax credit for contributions up to $1,000. He also wants to prioritize civics education in schools, reduce government intrusiveness, strengthen political parties, and reduce the length of campaigns.

(Please read the next section in our 2018 Books of the Year issue: “Peopling a War”)