What else can we learn from renewed attention on the Tulsa Race Massacre?

A pastor prays at Oaklawn Cemetery during a search for remains from the massacre. Mike Simons/Tulsa World via AP

America’s 2020 summer unofficially began with the words “I can’t breathe.” George Floyd’s death sparked a summer of demonstrations and protests that sometimes exploded into riots and chaos, all laced with racial strife.

America’s 2021 summer unofficially began with a retrospective look at another racial flashpoint: the Tulsa Race Massacre of 1921, which charred 35 blocks of the city’s Greenwood community. (Booker T. Washington had called it the “Negro Wall Street” since so many blacks prospered there, and the name eventually became “Black Wall Street.”) President Joe Biden visited Tulsa, and TV specials brought out photographs that were literally and racially black-and-white. Many Americans had never heard of the massacre, so here’s a brief review.

The tragedy began when a white woman accused a black man of assaulting her in an elevator. Then came an arrest, an angry white mob, and fiery destruction and death. Local officials know of 37 people officially who died in the massacre, but some estimates go as high as 300 people killed, mostly black. Survivors may have buried some in mass graves. Businesses, homes, and churches burned.

The lynch mob didn’t remain just a lynch mob. Local law enforcement deputized some whites, giving them guns, ammo, and license to round up and detain blacks. National Guardsmen detained Greenwood residents too. Meanwhile white mobs looted what they could and set the rest ablaze, shooting and beating blacks along the way. 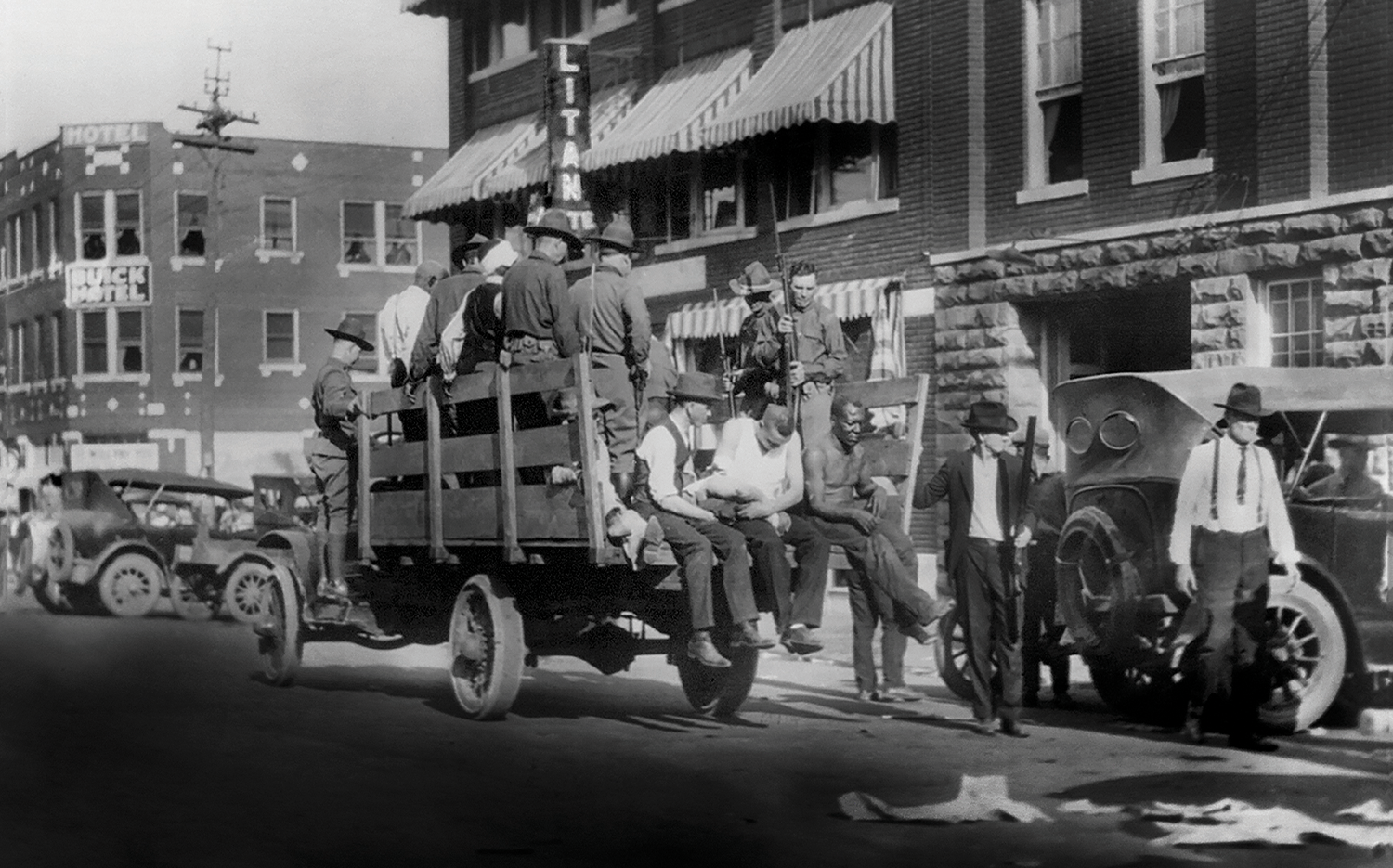 Despite immediate news coverage in 1921, for decades Tulsans and Oklahomans knew little of the massacre. My father-in-law, a Tulsa native, never learned of the event in school. Neither did his oldest child, my brother-in-law, who grew up in Tulsa. In 1996, Tulsa County District Attorney General and later Tulsa Mayor Bill LaFortune told a reporter, “I was born and raised here, and I had never heard of the riot.”

How did the Tulsa Race Massacre go from a shunned school subject to the reason a sitting president comes to Tulsa? Current politics, of course, plays a part—but many people wanted the truth. Through the decades researchers, writers, and curious community members compiled what they could. Some squirreled away long-forgotten documents. Some talked to survivors and their children. A college student scratched out a thesis here, a reporter threw together a story there. Fifty years after the massacre, a small gathering in a community hall was the only organized remembrance.

In 1997, the Oklahoma Legislature created the Oklahoma Commission to Study the Tulsa Race Riot of 1921. Decades of historical molehills coalesced into a mountain of research that journalists and historians should have been mining all along. “Too many early journalists and historians had dismissed black sources as unreliable,” the commission wrote in its final report. “Too few early librarians and archivists had preserved black sources as important. Both thereby condemned later writers and scholars to a never ending game of hide-and-go-seek, the rules rigged so no one could win.”

But for four years, volunteers flocked to whatever projects they could help with: “What was surprising—stunning, really … an unusual number of people were volunteering to work at the historical society. Plain, ordinary citizens, maybe forty or fifty of them, had asked to help the commission as unpaid researchers in the [Oklahoma Historical Society] collections.”

The commission’s work resulted in a detailed historical report on the massacre in 2001, accompanying essays from historians and researchers, and a groundswell of media attention turned eyes from across the United States to Greenwood for the first time since June 1921.

We now know much more about what the Oklahoma Commission called “the most important least known event in the state’s entire history.” But the story is also one of dedication. The amateur historians and volunteers who kept pushing for more information didn’t have to keep digging. The state of Oklahoma didn’t have to commission a study group or commit millions of dollars to the endeavor. Tulsa didn’t have to dig up unmarked graves in a city-owned cemetery, looking for massacre victims buried en masse. 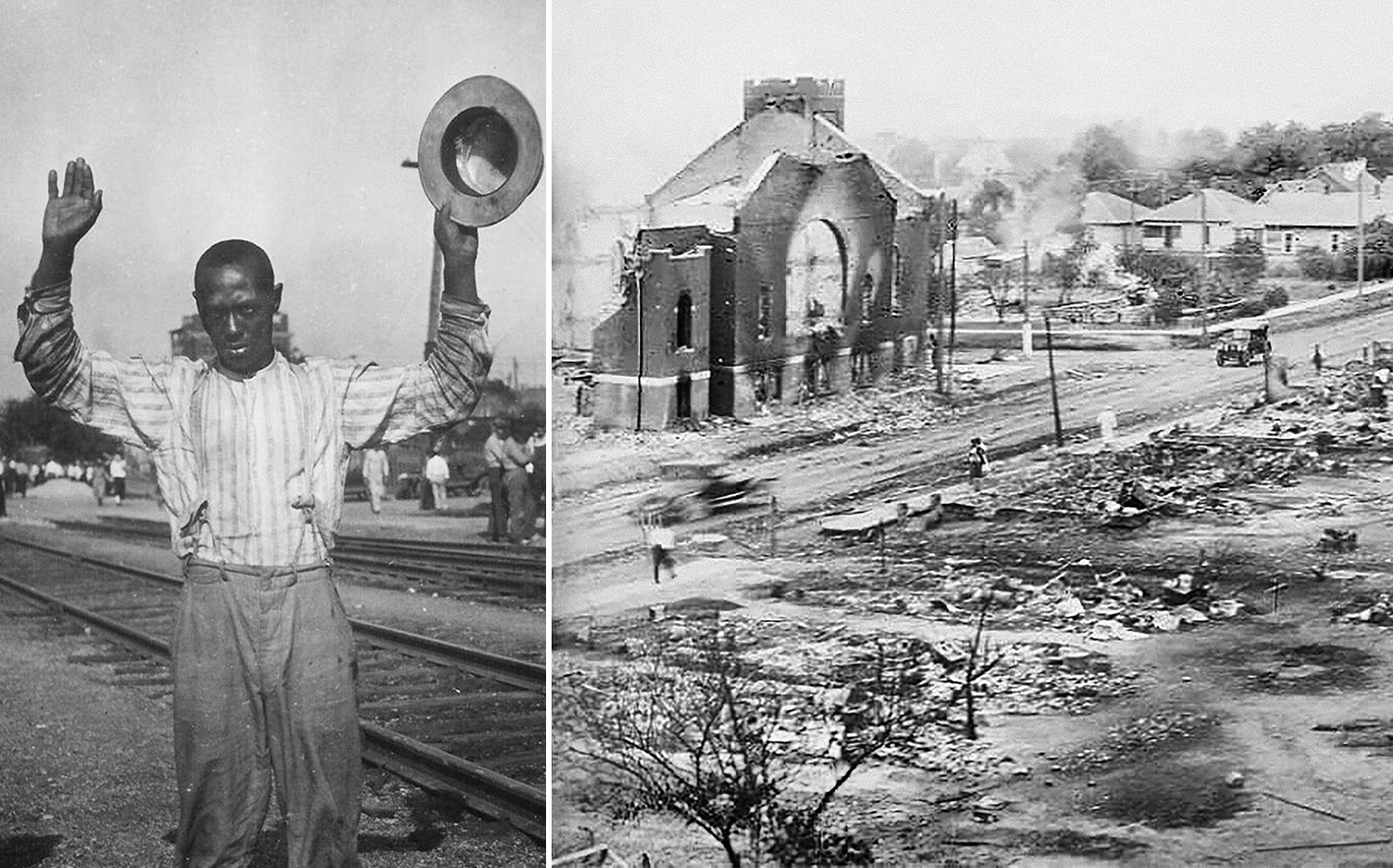 On June 3, the Tulsa City Commission unanimously passed a resolution apologizing for the massacre and called it the “single worst incident of racial violence in American history.” Some say the city and state should financially help the descendants of massacre victims, but courts have ruled that the state doesn’t have the authority to pay reparations, and Tulsa Mayor G.T. Bynum doesn’t think cash will fix what’s broken: “Direct cash payments do not solve larger issues that have been allowed to fester in Tulsa for a century,” he told the Tulsa World.

The three known survivors of the massacre and their families didn’t attend the grand opening of a new center about the massacre, called Greenwood Rising, because they don’t think it’s enough. They’ve sued Tulsa and governmental agencies and are seeking immunity from taxes, plus more. Residents and business owners in Greenwood today worry that the city will benefit from the spotlight while Greenwood falls further behind again.

Local debates on the best way to make amends will continue, but not even that would have happened if Tulsa and Oklahoma had not done the hard work of remembering. Moses told the Israelites, “Remember the days of old; consider the years of many generations; ask your father, and he will show you, your elders, and they will tell you” (Deuteronomy 32:7). In 2021, perhaps a summer of remembrance will replace 2020’s summer of strife.

Despite the efforts of the 1997 Oklahoma Commission and the national news the Tulsa riot of 1921 is now receiving, there still continues an abiding coverup. The history of the event only tells half the story, a horrible half, but only half. The other half is universally covered up and suppressed.

That other half is the voices and documentation of the mob itself. I know that there is documentary evidence of some of those voices, preserved, in part, in the sermons of Tulsa churches.

Why are the voices of the mob suppressed? Are they too horrible to hear? Are they too embarrassing? We already know that burning Black businesses and killing Blacks is bad. Everyone today agrees about that. We can mourn their loss and even be angry. But what is withheld from us exactly what it is we are angry about.

Those involved in the destruction are our neighbors. Simply calling them "racists" tells us next to nothing. We are compelled to use our wildest imaginations to make them into beings that have nothing to do with us, whether Black, white, or green. Is it that we fear in having humanized them and brought them near that we will hate them less, or that we will find in them too much of us? Do we prefer this distance, one perfect for ideals and windmill tilting, but not for the pain of confession and genuine repentance?