The rise in American anti-Semitism has varying roots, and many Jews feel afraid in places they haven’t feared before

On a Saturday in January, just north of New York City, members of the Lincoln Park Jewish Center had a prayer service followed by lunch. They filled paper plates with egg salad, pasta, gefilte fish, rolls, and fruit, so no one would have to wash dishes on Shabbat, the Sabbath. Nothing unusual in that for a “modern Orthodox” synagogue whose members try to observe Jewish law while still participating in American culture.

The congregants celebrated a young girl’s birthday, toasting her with “l’chaims” and each saying what they loved about her. It was chaotic and fun: People interrupted each other. One child tried to do the floss dance (a 2016 Instagram sensation) while another child corrected his form. Someone sang a birthday song in Spanish. Someone else poured tequila for the toasts. Also nothing unusual for the synagogue.

But one topic of conversation was different: What would they do if an attacker entered? Ismalia Geraldino, a Dominican Jew, was sitting at a table near the door and thought to herself that she would be the first in line.

“You can prepare and prepare, but when it happens, who knows,” replied Sally Barest, from the Bronx, whose 100-year-old uncle is a Holocaust survivor. The women said they never expected to feel this kind of fear in New York.

“There’s a shortcut people want to make. They want to make it extremists. … People feel comfortable with that answer because it exculpates them. It makes it all of the sudden not our problem.”

Incidents of anti-Semitism are at historic highs nationally, according to the Anti-Defamation League, and in New York City last year, police recorded a 21 percent rise in anti-Semitic hate crimes.

While this congregation does not use electronics on Shabbat, the president, Jack Schweizer, pulled out a panic button he carries in his pocket to press if anything happens. A police station sits not too far down the road, which gives a sense of safety, but Schweizer ruefully notes that the police would still take a few minutes to arrive. They were planning a drill soon.

Lincoln Park’s rabbi, Levi Welton, a chaplain in the Air Force, added a can of pepper spray to his keychain and has begun the process to get a pistol permit. After the machete attacks on a Shabbat dinner in New York City, he propped a large sword up in the corner of his dining room, which he acknowledges is a little ridiculous. But if someone drives by his home on Shabbat, his curtains are open, and as Orthodox Jews his family would clearly be having a Shabbat dinner.

Daniel Delman, who wears glasses and states his age as 11½, recently asked the rabbi whether he could carry a pocketknife on his way to shul, the synagogue. Delman reads Jewish news outlets and noticed that a man in New York, spouting anti-Semitic language, recently tried to enter a yeshiva.

“Things can really happen, you have to be prepared,” the boy said matter-of-factly. “One of their big targets is kids.” 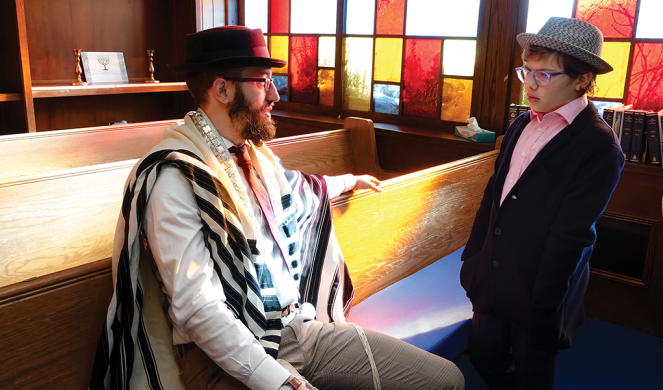 Delman wears a kippa and is the only Jew on his football team. People treated him differently at first, but “now they know I’m the same, it’s just a different religion.” But the walk to his synagogue is scarier.

“People have screamed anti-Semitic things at me and my dad walking to shul,” he said.

New York City, where the metro area has about 1.7 million Jews, was supposed to be a safe place. Jews first came in 1654. Nearly three centuries later it provided refuge from the Holocaust. Massive paintings by Marc Chagall, a Jew who in 1941 escaped Nazis in France to come to New York, cover the Metropolitan Opera’s lobby.

In this Yonkers congregation are Jews with roots all over the world: a Sri Lankan Jew who traced his heritage to Portuguese Jews ousted by the Portuguese Inquisition, a Yemenite Jew (only a few dozen, if any, remain in Yemen), and an Egyptian Jew. At another table in the back corner sat Chaim Grossman, 89, who has concentration camp numbers tattooed on his arm. He survived Buchenwald and is in a famous photo from the liberation of that camp, as one of the skeletons on a bunk next to Elie Wiesel.

But the American refuge doesn’t feel like a refuge now.

Swastikas drawn on Jewish buildings have escalated to strings of assaults on Orthodox Jews, whose religion is obvious in their clothing and hair. In August in Brooklyn, someone lobbed a brick at a Jewish man’s face, breaking his nose and teeth. Then it got worse: In December two shooters killed a police detective, then two Jews and an employee at a kosher deli in Jersey City, N.J. Two other Jews also suffered injuries.

At the end of December, an assailant rushed into a rabbi’s home in Monsey, N.Y., just north of the city, where Jews were gathered to celebrate Hanukkah. Armed with a machete, he stabbed five and critically injured two—one remains in a coma and may have permanent brain damage. According to court filings, the suspect had anti-Semitic journal entries and references to the Black Hebrew Israelite movement, as did the kosher deli shooters. 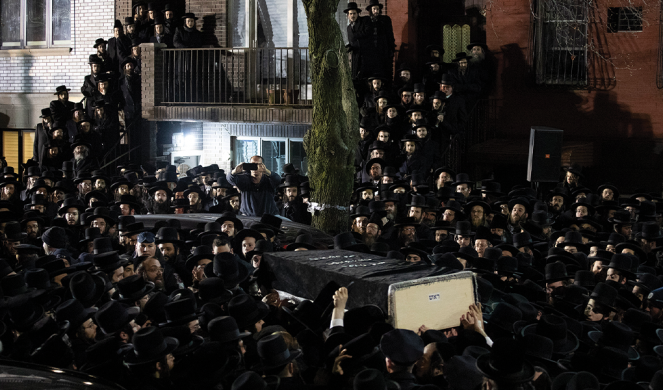 Orthodox Jewish men carry Moshe Deutsch’s casket outside a Brooklyn synagogue following his funeral on Dec. 11, 2019. Deutsch was killed in a shooting inside a Jersey City kosher deli. Mark Lennihan/AP

Synagogues, yeshivas, and Jewish community centers in the city already have security, and often a police presence outside. But as more crimes happen, they’re beefing up security further. New York officials have taken action: Gov. Andrew Cuomo set aside $45 million in grants for increased security for houses of worship, and the Lincoln Park congregation plans to apply for a grant to improve its entrances and exits. Cuomo and Mayor Bill de Blasio both ordered additional patrols for Orthodox Jewish neighborhoods. After the Monsey stabbing, the mayor and governor joined tens of thousands for a solidarity march in downtown Manhattan.

The crimes against Jews in the United States have many roots. Two white supremacists (including a member of an Orthodox Presbyterian Church) allegedly carried out the deadly attacks in Pittsburgh and Poway, while three African Americans with purported ties to the anti-Semitic Black Hebrew Israelite movement allegedly carried out the Jersey City and Monsey attacks. Jews in New York expressed the feeling that there was equal opportunity bigotry.

The solidarity march encouraged the Jews at the Lincoln Park synagogue, but some also felt it took too long for officials to realize how serious the situation was. On this particular Shabbat in January, after the lunch plates emptied but while the scent of gefilte fish and tequila still lingered, the Lincoln Park congregants discussed the hate against Jews in the United States.

Jack Schweizer, whose parents are Holocaust survivors, pulled out his cellphone: “Maybe it’s this. Because of this, there’s all kinds of stuff out there that is false.”

Rosalyn Avigad, who lives a few blocks from the synagogue, pointed out that anti-Semitism comes from both the political left and the right. She added that “political correctness” prevented anyone discussing perpetrators who weren’t white.

Avigad felt the anxiety closely; one of her sons lives in Pittsburgh, so when the synagogue shooting happened there, she panicked until he called to say he was fine. Her daughter-in-law’s parents live in Poway, Calif., the site of another fatal shooting last year.

Some of the older Jews at Lincoln Park say the city wasn’t a paradise for Jews in the past, but anti-Semitism was more subtle. Schweizer, who grew up in Manhattan’s Inwood, would wear a Yankees baseball cap over his kippa, wanting to hide his Jewishness. But congregants at Lincoln Park said they never expected to feel this afraid in New York. 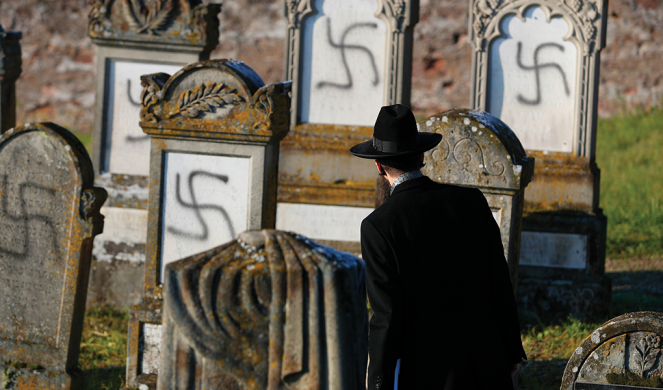 JOSH TURNIL IS JEWISH and grew up in Queens, but now is a Messianic Jew and lives in Paris, where he heads up the local Jews for Jesus office. His family in New York is “freaked out,” he said, because “it’s not something they’re used to in America.” Jews in Paris have already experienced this fear.

Anti-Semitic incidents continue to proliferate in France. In December, someone desecrated more than 100 graves in a Jewish cemetery using swastikas. The same month, a French appeals court decided not to try a man who admitted brutally murdering an Orthodox Jewish woman, because the man had marijuana in his system at the time of the crime that made him “delirious.”

The Jews for Jesus office in Paris is on a list of terror targets, and police have barricaded it. Turnil said workers regularly get threats and hate mail. Some anti-Semites try to justify their bigotry with arguments about Palestine or income inequality, but typically their hatred comes first and they latch on to purported “reasons.” Turnil said the hatred or distrust toward Jews is more pervasive than people will admit.

“There’s a shortcut people want to make,” he said. “They want to make it extremists. It was neo-Nazis, or it was Muslim extremists, or it was the psychologically imbalanced. People feel comfortable with that answer because it exculpates them. It makes it all of a sudden not our problem.”

Turnil recalled talking to a friend who works in one of France’s elite police forces. The friend was happy the force finally had a recruit who spoke Hebrew but wasn’t Jewish—because, the friend said, the police couldn’t depend on the loyalty of a Jewish recruit. Jews having dual loyalties is an old anti-Semitic trope. Turnil couldn’t believe that his educated, intelligent friend said that to him.

French politicians and police have been united in speaking out against anti-Semitism. But Turnil said the problem is “of a spiritual nature,” so police and politicians are limited in what they can accomplish. Evangelical church leaders in France have been responsive to the rise in anti-Semitism. They have come to solidarity marches with Jews and invited Jewish leaders to speak to churches. But church leaders have found less traction among the people in the pews.

“Jewish people are not perceived as people who need help,” Turnil said. “But Jewish people do need help … a lot of that anti-Semitic history comes from Christian civilization. So it’s a unique opportunity for Christians to say, ‘This is not what Christianity is about.’”