Demonstrators hold up the mobile phone lights as they form a human chain at the Peak, a tourist spot in Hong Kong, on Sept. 13. Kin Cheung/AP

WORLD first published this timeline on Aug. 30 and has periodically updated it as events develop. For the newest entries, please see the bottom of the page.

Political unrest in Hong Kong has accelerated since early this year, when the local government proposed a controversial new extradition law. The law would make it easier to send Hong Kong residents to mainland China to stand trial, a measure many people believe would undermine Hong Kongers’ legal protections. Over the summer, the movement has vacillated between peaceful demonstrations of millions of marchers and bloody clashes between protesters and police.

The week-by-week recap of the anti-extradition movement below takes as its starting point the June 9 march that drew a million Hong Kong citizens to the streets. Due to the numerous demonstrations and the largely diffuse nature of the movement so far—the lack of a leader, spontaneous logistics via the messaging app Telegram and the online forum Lihkg.com, and no single specific protest site—this timeline is not exhaustive: It focuses on significant events and turning points. The crowd size estimates come from protest organizers.

June 9: One million Hong Kong citizens participate in a largely peaceful march against the controversial extradition bill. Despite the historic turnout in a region with a total population of 7.5 million, Chief Executive Carrie Lam insists on proceeding with the bill. 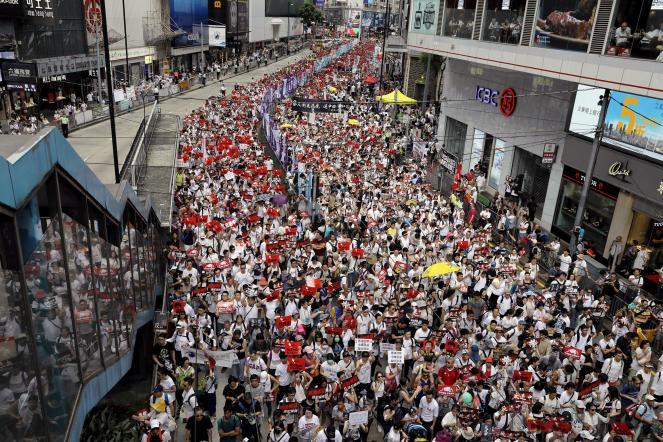 June 12: During another large demonstration against the extradition bill, clashes between protesters and police mark a violent turning point for the movement.

June 14: Mothers in support of young protesters hold a rally with thousands in attendance.

June 15: Carrie Lam announces the suspension of the extradition bill.

June 21-22: Angered by the excessive use of police force at the June 12 demonstration, thousands of protesters besiege the Wan Chai police headquarters. They demand a retraction of the government’s characterization of the June 12 protest as a “riot” and demand that arrested protesters be released.

June 24: Civil disobedience overtakes the Revenue Tower, where over 100 protesters occupy the tax office, halting government operations. To garner global support from the G-20 summit later in the week, activists launch a crowdfunding campaign to place advertisements in major international newspapers, including The New York Times. 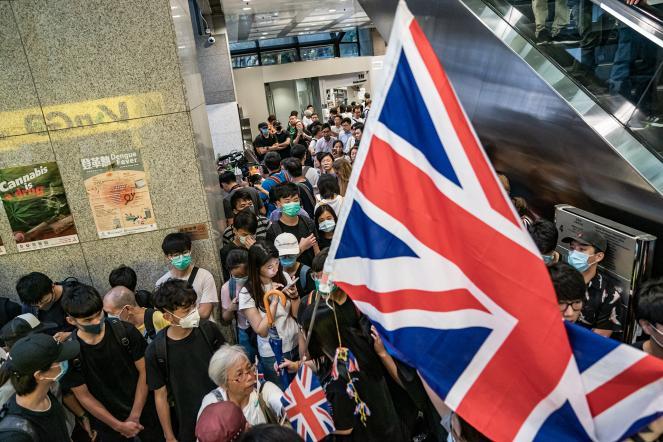 June 26: Protesters deliver petitions to foreign consulates. In the evening, thousands gather for a G-20 rally, followed by another rally at the Wan Chai police headquarters.

July 1: On the anniversary of the handover of Hong Kong to China, hundreds of thousands of citizens take part in an annual pro-democracy march. Meanwhile, another group storms the legislative building.

July 14: Mayhem breaks out in a Sha Tin mall following an afternoon of peaceful protest. Clearing the demonstration, police chase down protesters retreating into the shopping center, where skirmishes between protesters and police result in dozens of injuries.

July 21: In a bloody attack at the Yuen Long train station, suspected triad gang members dressed in white ruthlessly beat citizens wearing black, as black-clad protesters head home after a mass rally that ended with the vandalism of the China Liaison Office. The event deepens public distrust in the police, who do little to stop the violence.

July 26: An estimated 15,000 protesters occupy the airport to draw international tourists’ attention to the anti-extradition demonstrations. 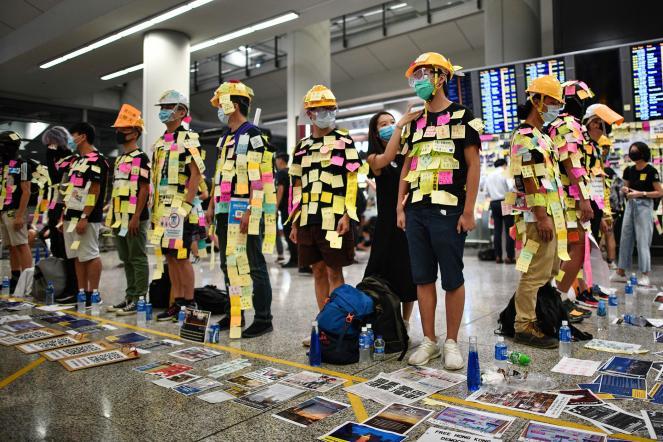 July 27: Angered by the Yuen Long attack, residents rally in Yuen Long in a tense standoff between riot police and protesters.

Aug. 1: Workers from the finance sector hold a rally in Central with over 1,000 participants.

Aug. 2: Defying political neutrality, civil servants hold their own rally, with an estimated turnout of 40,000. The same evening, 10,000 medical professionals also gather for a demonstration.

Aug. 5: Chaos seizes the city due to a general strike that results in hundreds of canceled flights and cripples several subway lines. Protesters besiege multiple police stations. The police fire over 800 rounds of tear gas and make 148 arrests. 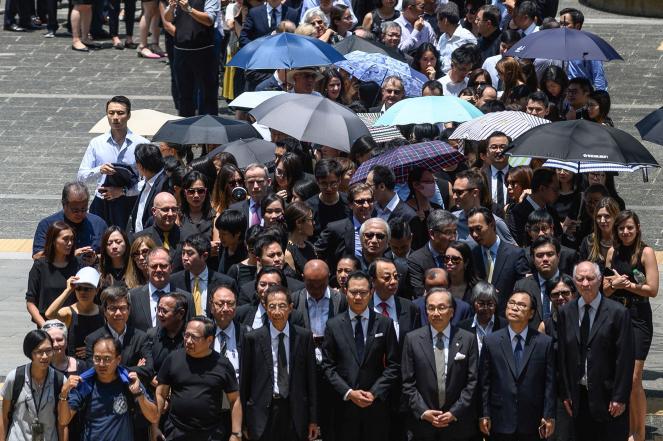 Aug. 12-13: Airlines cancel hundreds of flights as protesters, angered over the excessive use of police force, stage a large-scale airport occupation. The predominately peaceful occupation ends in violence when protesters discover two mainland Chinese men in their midst, whom they zip tie and beat.

Aug. 16: A rally for members of higher education draws 60,000 participants. 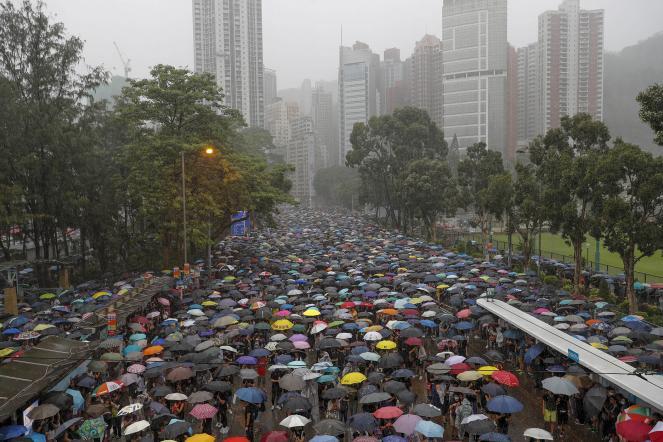 Aug. 24: Demonstrators in Kwun Tong pull down smart lampposts over fears of surveillance.

Aug. 25: Protesters throw bricks and Molotov cocktails in Tsuen Wan, and police use water cannons for the first time, along with a live warning shot from a gun. 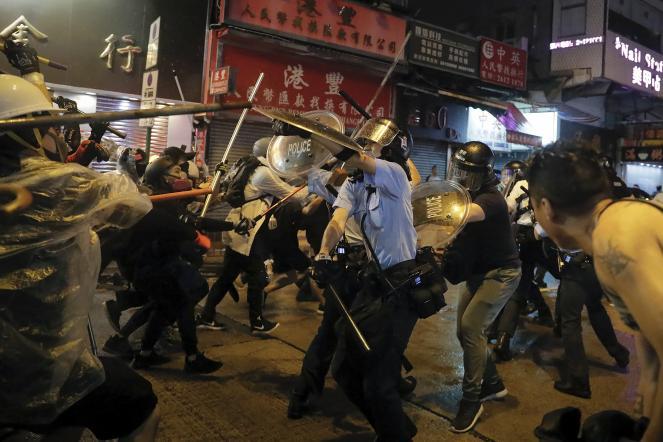 Aug. 28: Hundreds rally to protest China’s pressure on the Hong Kong airline Cathay Pacific. Earlier in August, Beijing rebuked the airline over its staff’s anti-extradition involvement, leading to the resignation of CEO Rupert Hogg and the firing of several staff members.

Sept. 2: On the first day of class, an estimated 30,000 college students from 11 institutions begin a two-week class boycott. Over 4,000 high-school students from at least 230 schools gather for a rally.

Sept. 4: Chief Executive Carrie Lam announces the official withdrawal of the extradition bill, giving in to a key demand of protesters. But the public views the concession as too little, too late. 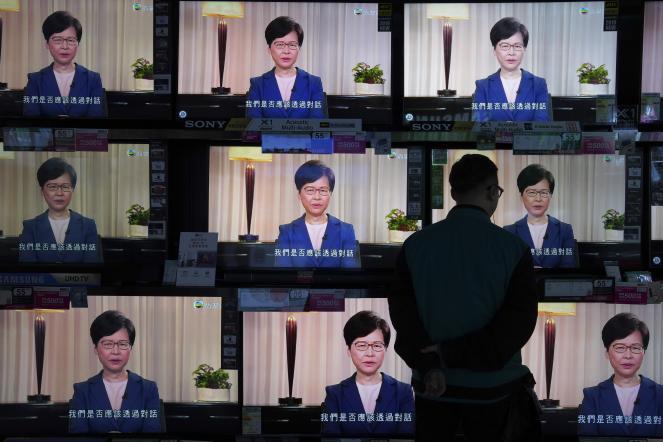 A man at a home electronics store in Hong Kong watches Carrie Lam make an announcement on the extradition bill on Sept. 4. Vincent Yu/AP

Sept. 8: Tens of thousands of citizens march peacefully to the U.S. Consulate to urge American lawmakers to pass the Hong Kong Human Rights and Democracy Act. Some protesters smash glass at the nearby Central subway station and start a fire at one entrance.

Sept. 10-12: “Glory to Hong Kong,” a new protest anthem, rings out across shopping malls, where hundreds of citizens gather to sing. 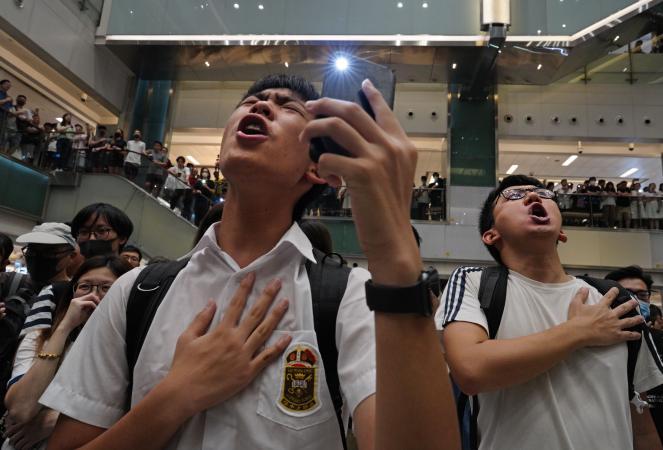 Sept. 14: Brawls break out between pro-democracy residents and pro-Beijing supporters in a Kowloon Bay shopping center.

Sept. 15: Outside the British Consulate, hundreds of Hong Kong residents accuse China of violating the Sino-British Joint Declaration, which stipulates Hong Kong’s high degree of autonomy, and urge the U.K. government to take action. The same afternoon, protesters hurl bricks and Molotov cocktails (80, according to police) at government headquarters and police lines.