Last August, the night after 26-year-old seminarian Samuel Chau spoke at a large Christian rally on how believers should respond to Hong Kong’s pro-democracy protests, a stranger sent him a message on WhatsApp. The text was filled with profanities, accusations, and threats.

The sender warned Chau against participating in any more prayer meetings and condemned him to hell. When Chau asked if the stranger had contacted the right person, he responded with Chau’s full name and the name of his seminary. (WORLD has given Chau a pseudonym due to the threats against him.)

Since the end of July, about 40 pro-democracy Christians in Hong Kong have received similar messages to their phones and apps attempting to stop them from supporting the protest movement. Many texts included details about the recipients’ families and churches. The protests, which began in June in opposition to a now-withdrawn extradition bill, have grown into a wider resistance movement against Beijing’s control over the semi-autonomous region of Hong Kong.

The Christians who received the texts are affiliated with Alliance Bible Seminary, Flow Church, youth ministry coalition G-Power, and the Divinity School of Chung Chi College at the Chinese University of Hong Kong. Most of the recipients are pastors, seminary students, or Christians who are outspoken on social media.

That August evening, Chau ended up chatting with the stranger for an hour. According to screenshots of the conversation, the man called himself “Lai” and claimed to be a riot police officer and a Christian on a “mad search” for Christians like Chau. Using obscenities, he urged Chau to stop his activities. Lai added that it was a difficult time to be a police officer: He had stopped attending his church, he said, due to mistreatment toward him and his family.

“It was a good conversation, because I learned a lot about the police and what they’re thinking,” Chau said. He invited Lai to his church, but the man remained noncommittal and eventually blocked Chau’s number.

Chau has received anonymous messages on four other occasions. The messages claimed he was anti-government and anti-police, contained death threats (“Your whole family’s gonna die”), and accused him of accepting U.S. funding for anti-communist activities. One message said that because he is Chinese, he shouldn’t criticize China. 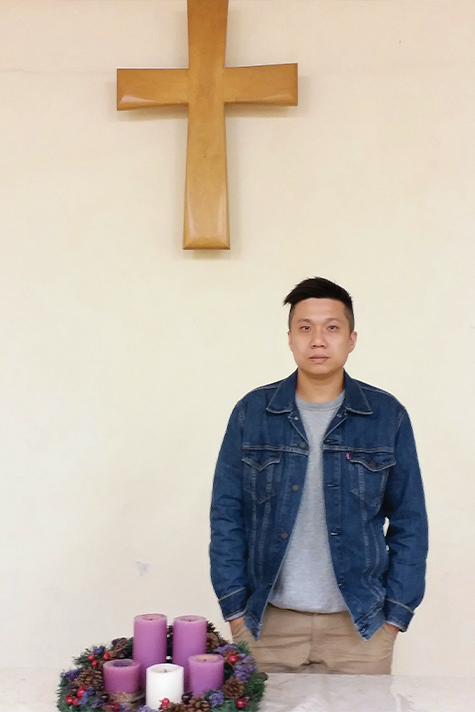 Other Christian leaders have received similar messages. Pastor Elton Lo, 37, chairman of G-Power, received anonymous threats beginning on July 31. In mid-August, he formed a WhatsApp group for fellow Christians who have also been targets for harassment. The group now has 38 members. Lo said his harasser initially targeted him and John Chan, an assistant professor of theology at Alliance Bible Seminary and founder of Flow Church, for their support of the pro-democracy protests.

“[The sender] thinks that starting from June we led the church, pastors, and Christians in doing a lot of things during the anti-extradition movement,” Lo said. “Based on what he said, we have offended the police, so he threatened us.”

Lo said that he and Chan organized the first public prayer meeting related to the protests on June 10, and that he was the first to sing the hymn “Sing Hallelujah to the Lord” on the front lines to calm protesters and police. The song later became an unofficial protest anthem.

Christian churches have had a visible presence in the pro-democracy movement, hosting public prayer meetings and opening their doors to provide sanctuary for protesters, and church leaders have spoken out about social justice. China’s Communist leaders view churches and Christian leaders as a threat, and many police officers may have adopted a similar attitude. Chan also received threatening messages from someone seemingly connected to the police force: The sender posted a photo believed to be the back of a Police Sports and Recreation Club membership card, according to Christian Times.

Pastor Hui Shuk-fun of Enoch Christian Fellowship, a ministry for police officers, said that rather than “framing the police,” the pastors should report the cases to the police so they can investigate. Yet Chau and the other targeted Christians have not reported the threats—they do not trust the police to help them, especially when the perpetrators may be police officers themselves. One recipient of the threats, a lawyer, advised others in the WhatsApp group against reporting, reasoning that such cases usually go unsolved and might complicate their relationship with police officials.

News footage of police brutality and accusations of police collusion with gangs have caused residents of Hong Kong to lose faith in the police force. A poll by the Chinese University of Hong Kong found that 70 percent of Hong Kongers distrust the police.

Although Lo still receives threatening texts, he continues to organize prayer meetings. Apart from being more careful about what he posts online about his family, Lo says he has not let the threats impact his participation in the democracy movement.

Chau has speculated that a friend may have leaked his information to the anonymous trolls, as one sender knew about Chau’s girlfriend, whom he had never mentioned online. The experience hasn’t stopped Chau from attending events and protests, but it has prompted more caution: “Whenever I do something sensitive, I … watch my back to see if anyone is following.”