2021 Book of the Year: Accessible Theology A book on evil demonstrates God’s goodness

In his book What About Evil? Scott Christensen bites off one of the biggest theological conundrums of the ages, and amazingly, it’s not more than he can chew. Christensen tackles the question of theodicy—“How does one seek to justify a good and sovereign God in the face of evil?”

It’s a mysterious and awesome question, and Christensen recognizes “the only theodicy that can satisfy the demands posed by the conflict of evil must be something extraordinary.”

Christensen spends 459 pages unpacking a theodicy that first explores errant attempts to explain evil in a world God originally created as good. Some theologians question God’s sovereignty in an effort to rescue Him from some kind of supposed blame for sin. Other thinkers question God’s goodness when they consider the horrible evils committed by man over thousands of years.

Christensen carefully uses the Scriptures to show God is sovereign over all things, including evil, but that He also bears no moral culpability for the evil that exists in the world. Here, Christensen confronts a common idea: Since evil exists, God’s goodness or power must not. The author pushes back and finds Biblical answers right in the middle of both:

“God purposed evil to exist so that his power and goodness would be supremely demonstrated in the strange and ironic wonder of the cross and empty tomb that crush evil in such dramatic fashion so as to produce the supreme goods outstripping any good that could come about without the prevalence of evil.”

This is Christensen’s “greater-glory theodicy.” In ways we can only begin to approach but can’t fully fathom, God ordains evil to exist because in His work of redemption through Christ, it’s the plan that brings Him the most glory.

The reader won’t fully discover that explanation until later in the book, but it’s worth the journey to get there. Indeed, for the first time since I started reviewing theological books, I found myself wondering whether I should give spoiler alerts. That’s not because the concept of God’s glory in all things is new, but because the author builds his case in an almost suspenseful way, using the Biblical narrative many Christians have heard many times before.

The entire Biblical narrative is crucial to thinking about evil, Christensen argues. While he examines passages that grapple with why God ordains evil (think Joseph and Job), Christensen says “the more poignant way to make sense of God’s overarching purpose for evil is to see how it fits into the Bible’s storyline as the principal conflict around which God seeks to highlight redemption. … The story itself is the theodicy of Scripture.”

The author walks readers through God’s story, considering implications of the fall, God’s deliverances in the Old Testament through men like Moses, and his ultimate deliverance in the incarnation, life, death, and resurrection of Christ. (He also offers careful analysis of the mysterious Trinitarian theology wrapped up in the coming of Christ.)

He adapts a famous line from Augustine to remind readers “our stories will fill our hearts with restlessness until we find our rest in God’s glory.”

Christensen’s book doesn’t solve every mystery about evil: God is infinite and we are not. But that’s part of the point too. Christensen shows the deep love and mercy of God in saving sinners through Christ, but he also reminds us that “while we certainly must not dismiss the importance we play in God’s plan, … we are not the center. … God is the center.” 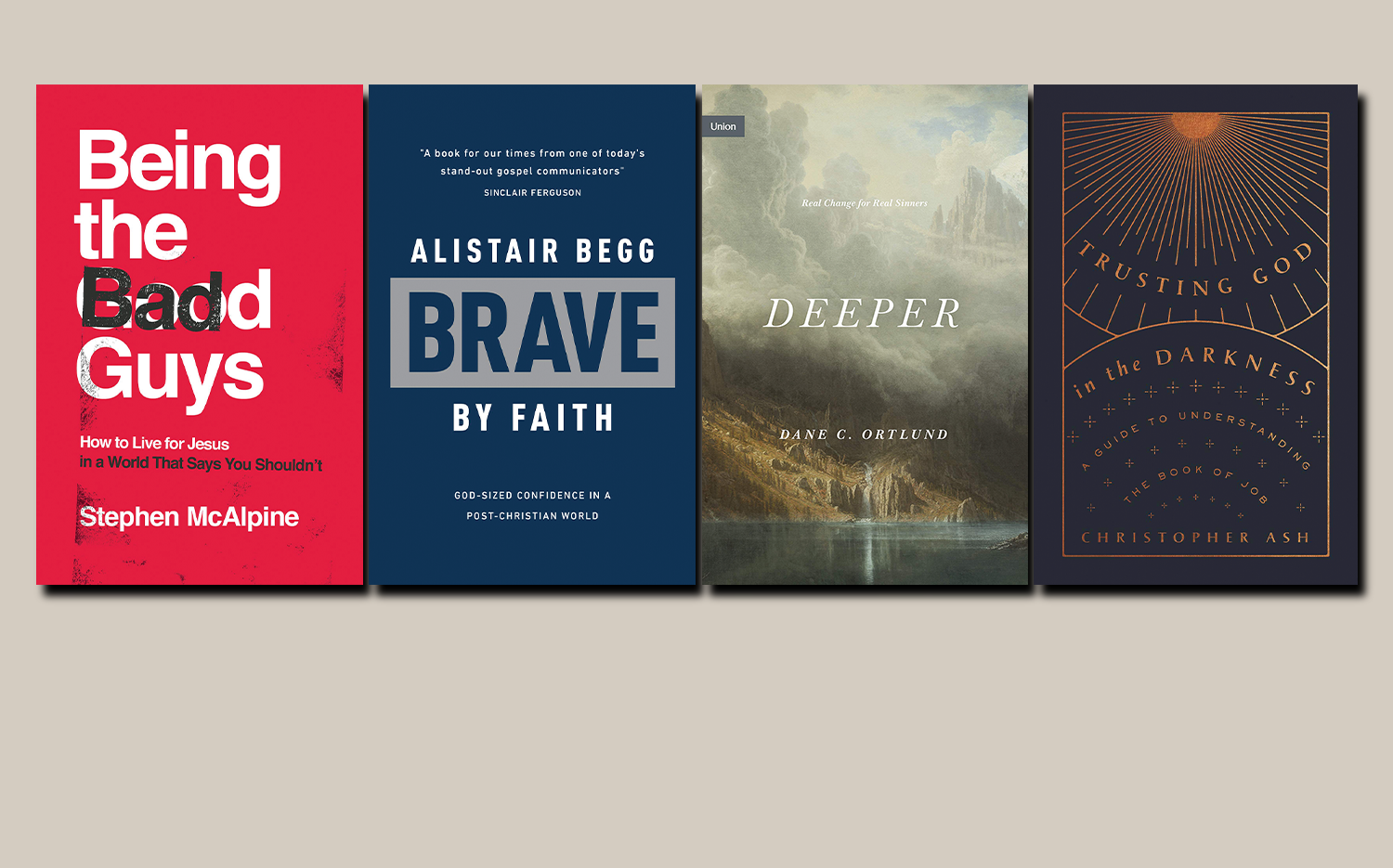 Being the Bad Guys: How to Live for Jesus in a World That Says You Shouldn’t

For Christians concerned about anti-Christian influences in a devolving culture, it’s easy to feel like the sky is falling. Stephen McAlpine understands why believers so often feel like the bad guy—he’s subtitled his book How to Live for Jesus in a World That Says You Shouldn’t. But while Christians face discouragements, McAlpine says living for Jesus in a contentious world involves resisting fear and cynicism. It’s easy to feel “if we don’t win this culture war everything is over,” but McAlpine also reminds readers, “That is how earthly politics work, not God’s kingdom.” He encourages Christians to prepare to help unbelievers whose own worldviews may ­collapse: “A big view of God means we do not fear other people, but we do not despise them either.”

Brave by Faith: God-Sized Confidence in a Post-Christian World

In a series of meditations on the book of Daniel, Alistair Begg reminds Christians, “We will be able to navigate our present moment to the extent that we realize that the God of the exiles in the sixth century BC has not changed in the intervening two and a half millennia.” Begg argues that “too much of the face of public evangelicalism is characterized by vociferous, angry venting or panicking, rather than prayerful, humble, calm, and confident belief in a sovereign God who controls all things.” We should stop ­living like “all the good things are in the rearview mirror” and remember “God is God, that God is in control, and that God’s kingdom ultimately knows no rivals.”

Dane Ortlund explores the topic of Christian growth and starts with an important reminder: “Our growth is not independent personal improvement. It is growth in Christ.” Apart from Christ, sinners aren’t wounded but dead: “We need not merely strengthening or helping, but resurrection, a full-scale deliverance.” For Christians delivered by Christ from spiritual death, growth still involves actively battling sin: “If you view your sinfulness as a bothersome headache more than a lethal cancer, you will see tepid growth.” God often uses suffering and pain, so we needn’t fear either: “The New Testament tells us again and again … that pain is a means, not an obstacle, to deepening Christian maturity.” Thankfully, Christ doesn’t fail: “He is more committed to your growth in Him than you are.”

Trusting God in the Darkness: A Guide to Understanding the Book of Job

Christopher Ash has succeeded at a difficult task: He’s written a book about Job that’s both short and effective. The author suggests reading slowly through the book of Job while reading his slim guide to the Old Testament book. He also enters into Job’s sweeping poetry with his own poetic style that helps lead readers through the beauty, pain, and awe of the book. Ash doesn’t offer easy answers for the problem of pain, but he doesn’t avoid the question either: He argues that’s what the book of Job offers suffering believers as well. And he shows how “the drama, the pain, and the perplexity of Job reach their climax at the cross of Jesus Christ.”