The Word and work at Westside

JoLynn DiGrazia has a blown-up photograph of two little girls tacked to her office door at Westside Ministries (WSM), a nonprofit that serves families in the west side of Turlock, Calif. She keeps that picture to remember why she founded and became director at WSM.

DiGrazia grew up in the farms of Turlock, an agricultural community in California’s Central Valley. After graduating from college, DiGrazia begrudgingly moved back to Turlock as a first grade teacher. She was a 24-year-old alcoholic who rather would have continued her sorority lifestyle. Farmland-locked and poverty-ridden Turlock was the last place she wanted to be.

But then, “I met that little girl right there,” she said, pointing to the 6-year-old in the picture, captured nibbling on Christmas cookies with her younger sister at church: Her name was Ramona. Her little sister  has no shoes on in the picture. “That’s what she came wearing.”

Ramona was DiGrazia’s student. DiGrazia could tell Ramona was smart, but the girl kept arriving late to school. One day during lunchtime, DiGrazia marched to Ramona’s house to give her parents a ­finger-wagging. But the father was out of the picture, and Ramona’s mother had just returned home from work. DiGrazia knew instantly that wherever she was coming from, it was no wholesome 9-5 office job. Ramona’s mother saw the disapproving look on her face. “Don’t judge me!” she spat in Spanish.

That was DiGrazia’s introduction to understanding the depths of poverty and dysfunction in many of her students’ lives: “I was very naïve. I had no idea what it was like to be a child in a home where there are no rules, no boundaries. I think God put a love in my heart for [Ramona].” DiGrazia had once left her childhood faith, but “God used [Ramona] to bring me back to Jesus,” she said. Although she had a master’s degree in teaching, “there was nothing that education could do to help her. I knew only Jesus could.” 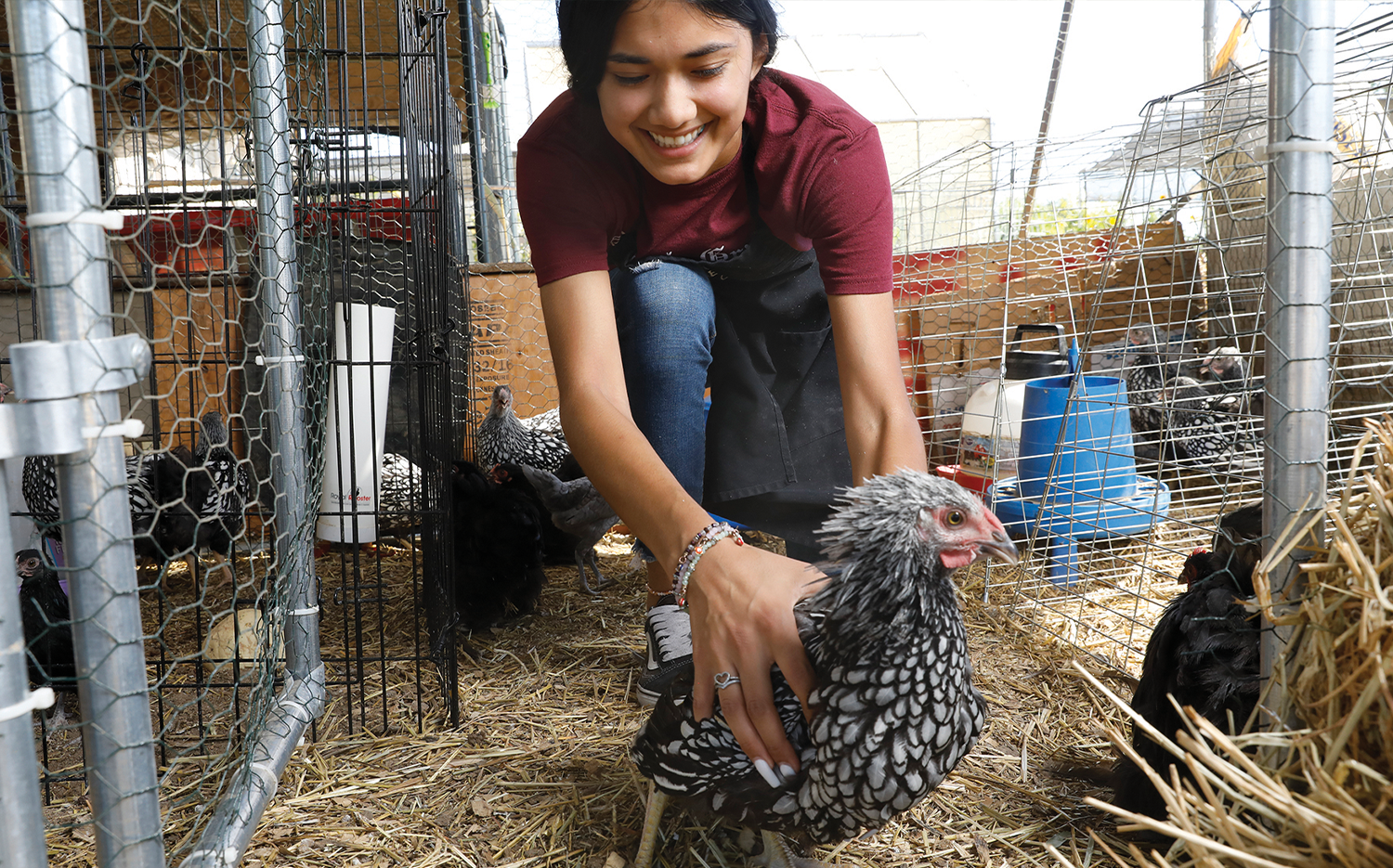 Children at Westside work with chickens and goats, and get to have fun as well. Craig Lee/Genesis

DIGRAZIA BEGAN Westside Ministries in 1984 at a friend’s house, a Saturday Bible club for DiGrazia’s students and other neighborhood kids. She called it Sunshine Saturdays. DiGrazia would drive around town picking up every willing kid and teach them about Jesus through songs, crafts, and puppet shows. When students came hungry, she and an aide bought cereal and milk for them. When they shivered in thin clothes, she organized a clothing drive and let parents pay 10 cents for each item.

That year, DiGrazia moved out of her parents’ house in the country and bought a dilapidated two-story house in the Westside community. She fixed it up, and soon about 100 kids were streaming in and out almost every day. More than 30 years later, DiGrazia and her husband Joe still live in the neighborhood, as do all staff. That’s a core philosophy of Westside Ministries: Jesus came and dwelt among us. “He didn’t live away from them and visit on the weekends,” DiGrazia said. She has never accepted a salary as director because “we don’t want to live far above the people who come here.” All her own kids attended public schools in the same district as the kids she serves.

In 1998, a local couple donated a 2-acre property near WSM. Donor money helped construct two buildings, an outdoor amphitheater, a field, a basketball court, a garden, two chicken coops, and a greenhouse. One building houses the office, cafeteria, and church, while the other building operates the Center for Urban Performance & Service (CUPS), which offers kids affordable dance and music lessons such as piano, ballet, jazz, hip-hop, aerial arts, and folklórico (traditional Mexican folk dance). 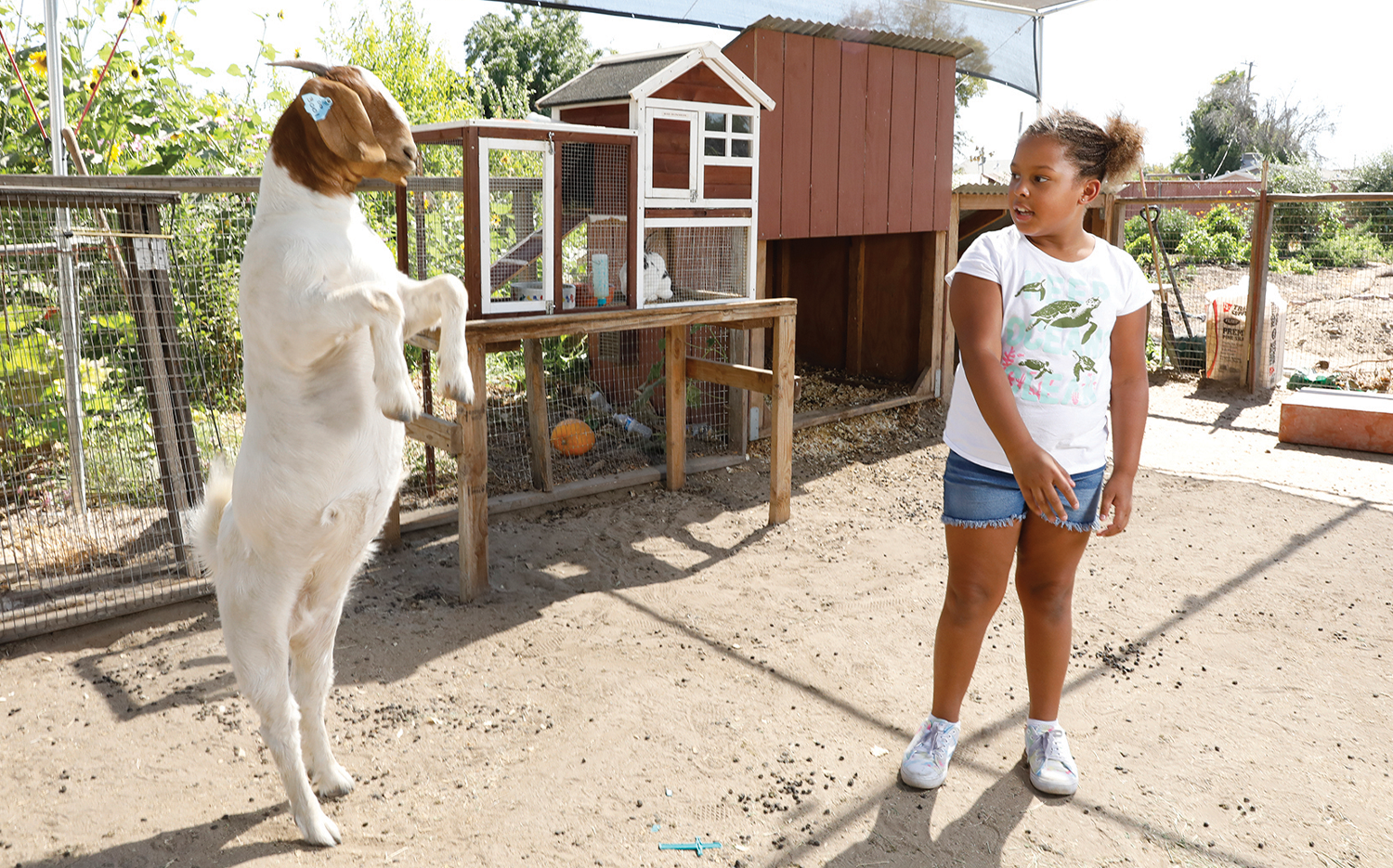 DIGRAZIA DOES EVERYTHING possible to grant the kids’ wishes. The chickens are there because the kids wanted them. Kids asked if they could do shows at the county fair with pigs and goats—they got them. They wanted to play football or soccer, so WSM gave them the space and day camps to do it. WSM tries to be fluid and organic in meeting the community’s desires.

But the kids also have to work for it. WSM intentionally avoids giveaways, and some kids help manage the property. Kids who can’t afford to pay for CUPS classes clean bathrooms or vacuum rooms. They also must earn entry to summer camp by helping with maintenance and cleaning. Once kids enter junior high, WSM staff expect them to become leaders and help the younger kids with homework, reading, and Bible club.

Kids at WSM turned a weed-tangled dirt field into a lush garden. They grew cucumbers, tomatoes, and eggplants; planted fig, peach, apple, avocado, and pear trees; and built chicken coops and herb gardens. Through an agricultural program, they learn how to grow organic produce using water conservation methods, create landscape gardens, breed game hens, and raise pigs. Then they take their produce and livestock to the county fair to make some pocket money.

Work is central to the program, DiGrazia said: It teaches personal responsibility, self-sufficiency, dignity, and a “can-do” attitude in a community with high poverty, unemployment, and despair: “If you’re ever going to escape poverty, you’ve got to learn to meet expectations.” 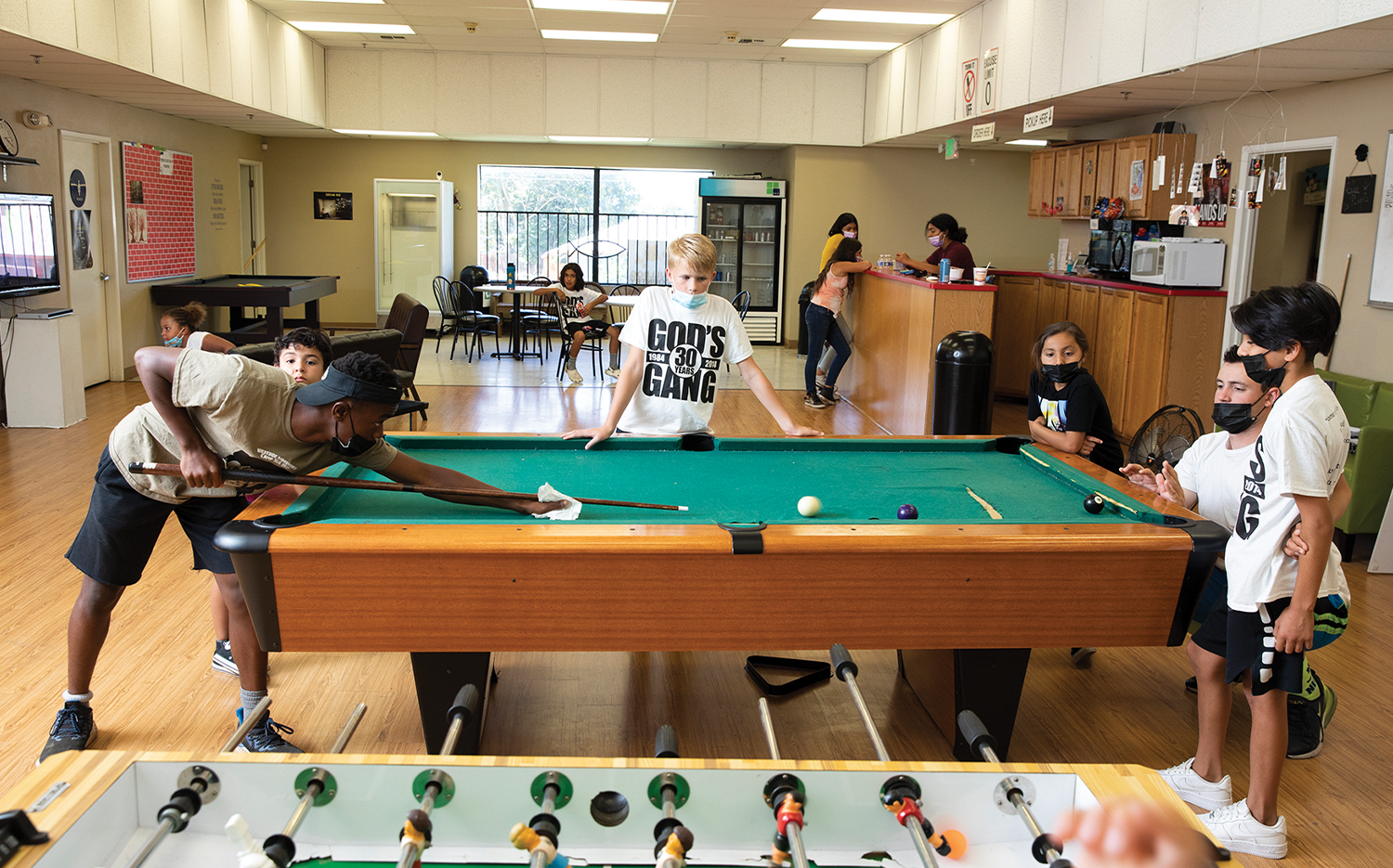 WEDNESDAY IS the craziest day of the week at WSM. WSM offers an after-school Bible club called Wild Wednesday for kids in transitional kindergarten (a bridge between pre-school and kindergarten) through sixth grade and an evening Bible club for teenagers in seventh through 12th grade called Teen Club. The pandemic pushed everything outdoors, and the Wednesday I visited, about 70 children gathered under the shade outdoors with masks on. That afternoon, they learned about wisdom by reading 1 Kings 3:16-28, the story about King Solomon and the two mothers.

“Are you wise?” DiGrazia asked a 9-year-old boy with big, almond-shaped eyes.

“No,” he solemnly shook his head.

“Who do you know is wise?” DiGrazia asked.

“You?” he guessed, and DiGrazia joked, “Good job.”

Another boy said his brother is wise because when given the choice between one-eighth or one-fifth of a chocolate bar, he chose the one-fifth.

At WSM kids can be kids, away from adult pain and troubles, gang influence, and drugs. It’s where kids can dance silly moves and sing “I like bananas!” at the top of their lungs, show off the splits during a hip-hop dance lesson, or bounce balls under the sun.

But the kids also share their troubles: The 9-year-old boy with almond eyes lost his father to a drive-by shooting. A girl of about 11, wearing a pink scrunchie, told me she’s praying for her father and brothers because “right now they chose that path” while pointing at “the path of evil” on her Bible club workbook.

Sally, a different, shy 11-year-old girl who loves animals and sour pops, has been homeless almost her entire life. Her mother suffers from rheumatoid arthritis, her father just finished a jail sentence, and she lost two aunts to COVID-19. Sally said she likes coming to WSM because “they teach about God. They teach kids you don’t have to be engaging in gangs and stuff.” For kids like Sally, WSM is the one constant in a forest of instabilities.

DIGRAZIA HAS SUFFERED many heartbreaks and cried many tears since founding WSM 37 years ago. Alma, her former student, died in a shooting in the mid-1990s. DiGrazia has seen many kids fall into substance abuse, crime, and gangs, then watched their children follow the same paths. The meth epidemic hit the community hard, as have recessions. Cycles of poverty, crime, addiction, and trauma roll over and over. In some families, they seem to get worse.

All WSM can do, DiGrazia said, is offer children another choice by teaching them about Jesus and trusting the Holy Spirit: “We give them the Word, and they can reject the Word. But generally, the Word comes back and finds some.” As the neighborhood gentrifies, pushing long-term residents out due to unaffordable housing, DiGrazia encourages kids at WSM to come back as adults, buy houses in the west side, launch businesses, and invest in the community—and many have. Most WSM staffers and volunteers are former kids who came back.

Isabella, 26, is one of them. Isiordia came to WSM as a third grader. Then her father died, then her uncle, then her aunt—all within a week. Isabella’s mother worked long hours to support the family, and Isabella’s oldest sister became a surrogate parent to Isabella and her baby brother.

They lost housing and for years lived in an uncle’s garage. WSM provided them a safe place while their mother worked. WSM provided clothes, shoes, and food when they were financially struggling. When her youngest brother had leukemia, WSM provided spiritual and emotional support—not just for the kids, but for their mother as well.

“That’s what I see happening a lot here,” Isabella said. “They don’t just help the kids. It’s a whole family affair.” Isabella fell in love with dancing at CUPS, and so did her brother. They both earned dance scholarships to college. Now Isabella is back at WSM as a dance instructor: “After receiving so much … it’s really important to give back, because I see that these kids really need that.”

The needs are many. But for every discouraging story, DiGrazia sees children who follow Jesus, break their family’s cycle, then choose to help others: “No matter what, we stay here, and we continue to do what God has called us to do, regardless of what happens.”

—WORLD has changed the names of current and former students at Westside Ministries to protect their safety.