Some hard questions for conservative evangelicals

I can set the scene by going back to politics-and-sex conversations of the 1990s, bookended by a 1990 GQ article lionizing Sen. Ted Kennedy and by the 1999 failure of the Senate to remove President Bill Clinton from office.

Michael Kelly’s article in 1990 noted, “In Washington, it sometimes seems as if everyone knows someone who has slept with Kennedy, been invited to sleep with Kennedy.” Kelly vividly described the senior Massachusetts senator’s propositioning of a 16-year-old congressional page, his employment of an aide “whose real position was to procure women for Kennedy,” and his sexual activity in restaurants with a congressional lobbyist and a waitress. The Kennedy soap opera had hundreds of episodes.

Kelly, an accurate reporter who was officially the first journalist killed during the 2003 Iraq invasion, quoted Orrin Hatch, the GOP senator from Utah, saying of Kennedy, “He has the kind of personal wealth where he can do just about anything he wants to do, but I wouldn’t trade life with him for ten seconds. I’d rather be poor and in the condition that I’m in than trade with Ted.”

But Hatch also called Kennedy “one of the all-time-great senators.” No, no, no. When Massachusetts voters did not oust Kennedy following the fatal Chappaquiddick episode of 1969 or other abuses over the decades, the Senate Ethics Committee should have voted to expel him, as it did Bob Packwood in 1995. (The Oregon Republican, accused of sexual misconduct, resigned before the whole Senate voted.)

Mitch McConnell, the Kentucky Republican who is now the Senate Majority Leader, was chairman of the Ethics Committee then. Four years later, during the Senate debate on Bill Clinton, McConnell said, “We Republicans were aware during the Packwood debate that we would likely lose that Senate seat if Sen. Packwood was removed from office. So, we had a choice: Retain the Senate seat or retain our honor. We chose honor, and never looked back.”

McConnell concluded, “Do we want to retain President Clinton in office, or do we want to retain our honor, our principle, and our moral authority? For me, and for many members in my impeachment-fatigued party, I choose honor.” Sadly, the Senate did not choose honor regarding either Ted Kennedy or Bill Clinton. Neither was truly penalized for using the prestige and power of a government position for sexual advantage, even if the activity was consensual. When Clinton rode high in polls despite lying about his exploitation of Monica Lewinsky—she was a 22-year-old White House intern in 1995—he popularized oral sex among many young people.

The Roy Moore situation is difficult because, even as the number of accusers mounts, we have no photographic evidence of misconduct as with Sen. Al Franken of Minnesota, or diary evidence as with Bob Packwood—and the Moore incidents happened many years ago. Some of the teenagers he dated or tried to date, while serving as an assistant district attorney, thought he was creepy. The claims of sexual assault are in a different category.

Some WORLD readers may carefully examine all the evidence and conclude that Moore is getting a raw deal. Some may want to vote for Moore and let the Senate Ethics Committee decide what to do with him. Others may believe Moore’s sexual probity in recent years outweighs what he may have done when young—and who among us has nothing to confess and repent of?

My concern is with those who have written to me and said, in essence, None of those considerations matter because what’s most important is to have 52 rather than 51 Republican votes in the Senate. If numerous Alabaman women are lying, they are defaming Moore; but if they are telling the truth and he refuses to acknowledge any impropriety, he is defaming them. If the latter is the case, Alabama Republicans face the choice McConnell spoke of: “Retain the Senate seat or retain our honor.”

If we act toward Roy Moore as feminists acted toward Bill Clinton, we need to think about the message we’re sending to our children: Some are concluding that conservative evangelicals care more about political power than anything else. (The irony is that seeking political power now is the quickest way to lose it in an upcoming backlash election.)

We are at a cultural turning point in America. Right now, as millions realize that an anything-goes posture on sexuality leads to misery, not joy, our culture could start inching back to a Biblical understanding of male-female relations, in which men protect women. Or, we might move toward a radical feminist understanding in which no man can be trusted. What if we win an election but lose a generation?

And here’s what I most want us to keep in mind: More important than any particular election, more important even than our cultural direction, is the gospel. The Good News is not a favorable political poll but the Bible’s announcement that God saves sinners. Our goal should be to glorify God and enjoy Him forever, not to abandon central Biblical principles regarding women’s worth, or to glorify a politician and win a Senate seat.

When we and our candidates are under pressure, we should convey to our children this message: Nothing in my hand I bring; / Simply to Thy cross I cling; / Naked, come to Thee for dress; / Helpless, look to Thee for grace; / Foul, I to the fountain fly; / Wash me, Savior, or I die. 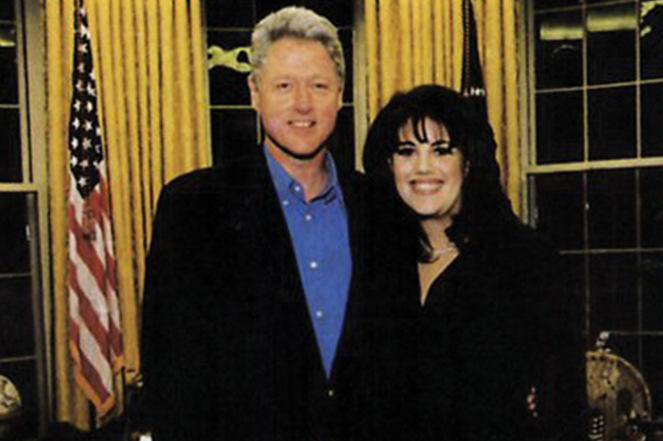 And hard questions for secular liberals

The left has its own problems now—not only Al Franken’s groping of a sleeping woman, but the teaching many liberal culture gurus have offered over the years.

Manhattan received “universal acclaim” from movie reviewers, according to the Metacritic website. None of the reviews I saw criticized the basic premise. Roger Ebert wrote, “It wouldn’t do, you see, for the love scenes between Woody and Mariel to feel awkward or to hint at cradle-snatching or an unhealthy interest on Woody’s part in innocent young girls. But they don’t feel that way: Hemingway’s character has a certain grave intelligence.”

Grave intelligence: Hemingway makes comments such as, “I like it when you get an uncontrollable urge.” The Gershwin music in the background as the 42-year-old and the 17-year-old kiss in a Central Park carriage makes the scene seem romantic, not yucky. When Allen’s character temporarily decides to dump Hemingway’s and says, “This was supposed to be a temporary fling,” she responds, “We have great sex”—and he asks, “Why should I feel guilty about this?” (Not the sex, but the breakup.)

Woody Allen lost some supporters 25 years ago when he was in “a relationship” with actress Mia Farrow and entered into “a relationship” with (and later married) Farrow’s adopted daughter, Soon-Yi Previn. Manhattan’s reputation, though, survives: It is now No. 46 on the American Film Institute’s list of the 100 greatest American comedies—comedies, not tragedies.

Nearly two decades after Manhattan, feminist Gloria Steinem offered a fulsome defense of Bill Clinton’s use of Monica Lewinsky. Steinem acknowledged in a New York Times column on March 22, 1998, that “President Clinton may be a candidate for sex addiction therapy. But feminists will still have been right to resist pressure by the right wing and the media to call for his resignation or impeachment.”

Steinem said the Monica Lewinsky affair really did not count, despite Lewinsky’s age and the power differential, because she welcomed the attention. Regarding Clinton’s attack on Kathleen Willey, Steinem said he “made a gross, dumb and reckless pass at a supporter during a low point in her life. She pushed him away, she said, and it never happened again. In other words, President Clinton took ‘no’ for an answer.”

Steinem concluded by saying it didn’t even matter that Clinton lied under oath, because “we have a responsibility to make it O.K. for politicians to tell the truth—providing they are respectful of ‘no means no; yes means yes’—and still be able to enter high office, including the Presidency. Until then, we will disqualify energy and talent the country needs.”

As the Moore debate escalated in mid-November, liberal social critic Caitlin Flanagan wrote in The Atlantic, “The Democratic Party needs to make its own reckoning of the way it protected Bill Clinton. The party needs to come to terms with the fact that it was so enraptured by their brilliant, Big Dog president and his stunning string of progressive accomplishments that it abandoned some of its central principles.” —M.O.