High-school students are organizing and engaging in the fight for life, despite sharp opposition from some administrators and peers

Her parents started taking her to prayer vigils outside abortion centers when she was a child, and she witnessed firsthand the vitriol abortion supporters sometimes hurl at people pleading for the lives of unborn babies. But that didn’t make it any easier to face the same kind of ridicule and derision in her own high-school cafeteria.

Once, while handing out abortion information at Dripping Springs High School near Austin, Texas, Curran endured a harangue from a fellow student that included a stinging (though untrue) personal attack: She must be pro-life because she was sleeping around.

After another pro-life outreach event that included handing out free cupcakes, the principal called Curran into his office. Parents had complained after several students accused Curran of forcing them to take the sweet treats—and the pro-life handouts that went with them.

“We know we’re going to be discriminated against, even by parents, because of our beliefs,” said Curran, in 12th grade this year.

Despite the hostility, Curran and other members of Students for Life Dripping Springs continue to gather once a month in the school cafeteria to hand out flyers describing scientific facts about unborn babies. The students are part of the latest front lines of the pro-life battle: Winning the hearts and minds of the next generation means finding even younger activists.

Students for Life of America, best known for its work with college students, now has 604 high-school chapters—334 at religiously affiliated schools and 270 at public campuses. Starting clubs in public high schools isn’t easy, in part because that’s where the battle for influence can be most fierce: Planned Parenthood has steadily gained a foothold in the nation’s schools through sex education programs and “health-related” presentations. The abortion giant has an army of advocates among teachers and administrators sympathetic to the feelings-are-gospel mantra. 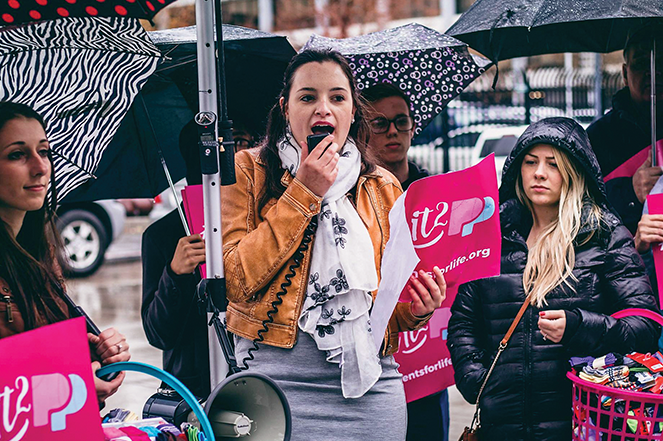 To counter that message, Students for Life is training teens to engage their peers in conversations about the value of human life and the moral imperative to defend the rights of society’s most vulnerable people.

Curran joined the fight better prepared than most. Inspired by her parents’ pro-life activism, she attended two pro-life boot camps hosted by the Catholic Diocese of Dallas. Later, she heard a presentation from Students for Life President Kristan Hawkins, who talked about the need for pro-life high-school leaders. Two weeks later, Curran and four other girls marched into their high-school counseling office to get the paperwork required to start an official pro-life club. Prepared by stories of hostile administrators in other districts, the students expected opposition. But Principal Joe Burns supported their efforts, and Students for Life Dripping Springs held its first meeting about a month later.

Dripping Springs sits 23 miles west of downtown Austin. Its proximity to the overcrowded state capital has made the once-rural community popular with commuters. In the last 15 years, developers have plowed over gnarled oak trees and grassy pastures to make way for cookie-cutter neighborhoods, grocery stores, and coffee shops. But the culture remains largely unchanged.

Curran says many people in the town go to church and hold conservative beliefs: “But there are a high number of agnostics among the youth, and most are really liberal.”

Students for Life Dripping Springs, now with 25 members, trains teens in foundational pro-life advocacy: protests outside abortion centers and participation in regional marches. But its biggest focus is sharing a pro-life message with other students. The club sets up an informational table once a month in the school cafeteria and occasionally chalks pro-life messages on the campus sidewalks. Members use scientific facts about unborn babies to advocate for the value of human life at every stage.

Teaching students how to stand up for their rights presents one of the biggest challenges of working with high schoolers.

That message resonates with a generation often interested in advocacy for human rights issues. The club has even recruited some atheist and agnostic members. But other students still view the pro-life movement through a personal choice lens, as the complaints about the free cupcakes showed. The offended students told their parents the pro-lifers hated them. Teachers who observed the cafeteria interactions vouched for the pro-life students’ respectful behavior, and nothing came of the incident. But Curran, who serves as this year’s club president, knows she and the other pro-life students will continue to face opposition from peers indoctrinated in the understanding that tolerance equals support for any behavior or belief.

WHETHER THEY KNOW IT OR NOT, students using the “hate” label to describe anyone who disagrees with them are parroting Planned Parenthood’s message. The nation’s largest performer of abortions often wins young people and creates new customers by building relationships early on, said Tina Whittington, vice president of programs for Students for Life. Planned Parenthood’s programs encourage sexual activity and distribute birth control to teens, and when birth control fails, the group offers abortions

Planned Parenthood has long had its hooks in high schools through a variety of sex education curriculums. In some districts teachers present the material. In others, Planned Parenthood staffers conduct seminars. Parents often don’t know who’s teaching their kids about sex until they come home with shocking stories. Instructors in one California district included a self-described “pleasure activist” and someone who also led “pleasure workshops” for an adult toy store. Planned Parenthood’s sex education curriculum encourages teens to follow their feelings and lauds casual sex. Videos used in classroom presentations include graphic depictions of various relational encounters.

Parents, even in often liberal states like California, have pushed back against overly explicit sex ed lessons, prompting Planned Parenthood to adopt a new tactic: get staffers permanently installed on campuses. In May 2017, the abortion giant proposed opening a “health” clinic inside Reading High School in Reading, Pa. The center would have provided sexual health counseling and referrals for services, including contraceptives and abortions. Although Reading doesn’t have its own pro-life high-school group, students from nearby schools rallied outside a Reading school board meeting in June to urge trustees to reject the proposal. They wore teal T-shirts emblazoned with the Students for Life slogan, “I am the pro-life generation,” and carried signs declaring, “We don’t need Planned Parenthood.”

The board postponed its decision until August and eventually agreed to reject the proposal. Kristan Hawkins called it a major victory in one of the first ground-level fights Students for Life has engaged in at the high-school level. Emboldened by the Reading outcome, Hawkins has started to look for schools where Planned Parenthood doesn’t have an established presence but might seek one.

“It’s very powerful when you have a student group willing and courageous to stand up against adults in their schools,” she said. “That speaks to where young people are the ones rising up and leading this charge. It sends a powerful signal to their peers.”

STUDENTS FOR LIFE LAUNCHED IN 2006, and as its college campus activism started getting more attention, high schoolers contacted the group for help starting their own clubs. When the number of high-school groups grew to about 50 in 2013, Students for Life realized it needed to start a new outreach initiative. At about the same time, Planned Parenthood ramped up its own efforts to reach high schoolers. “For us, to be the voice of life and disrupt that customer cycle, we decided we needed to be everywhere Planned Parenthood is,” Whittington said.

Students for Life created high-school-specific outreach manuals and information packets, tailoring the material for a younger audience. It also had to rethink recruiting efforts. College campuses are open to any visitors, but pro-life groups can’t walk onto a high school’s grounds to hand out information. Students for Life volunteers set up meetings with church youth groups, attended Christian concerts, and traveled to teen conventions. In the first year, the number of clubs tripled.

The effort to start a new club doesn’t always go as easily as it did in Dripping Springs. In 2015, administrators at a North Dakota school district denied applications for two pro-life clubs, calling them too controversial. The district approved the applications only after Christian legal firm Thomas More Society sent a warning letter.

Clubs in Washington and Virginia faced similar initial denials. And in 2017, a Pennsylvania district tried to restrict a pro-life club’s activities to its own members, forbidding the club from engaging in outreach efforts to other students. Administrators did not back down when Thomas More attorneys intervened, so the students filed a federal lawsuit. To avoid the litigation, the school district in October agreed to let the club operate freely.

Teaching students how to stand up for their rights presents one of the biggest challenges of working with high schoolers because many instinctively obey authority figures, Whittington said. If a school administrator tells them they can’t hang a pro-life poster even though other clubs are allowed to hang their posters, students aren’t likely to argue. Regional Students for Life directors spend lots of time educating students about their First Amendment freedoms and coaching them to object respectfully when their rights get trampled, Whittington said.

Although high schoolers might take more work to train than older students, the early pro-life activism experience makes them much better prepared to engage in the movement once they get to college. They already have a grounding in pro-life apologetics and experience in defending their beliefs before a hostile audience. When they’re in the less restrictive college environment, Whittington said, they feel free to do anything: “The sky’s the limit.”

Curran, the Dripping Springs senior, has applied to 14 different universities and doesn’t know yet where she’ll end up. But she says wherever she goes, she’ll join a pro-life club or start one.

Whittington said that kind of early resolve multiplied across the country could galvanize the pro-life movement. “We’ve been saying we’re the pro-life generation for years, maybe before it was true,” she said.

“But the more we invest in high-school students, the more that becomes evident. … We have made so much progress on the legal front. If we really want to ensure those things stick, we must invest in young people. They are the next generation of voters. Who knows where we’ll be in 10 to 20 years?”

I am not sure I understand why the school administrators push back so hard. Is it because pro-life is usually Christian based and the administrators are afraid of expensive lawsuits by the ACLU, because the ACLU usually attacks anything with a Christian influence?