The moment the world stopped turning

Americans in Sioux Center, Iowa, describe where they were on 9/11

The twin towers of the World Trade Center burn behind the Empire State Building after terror attack on Sept. 11, 2001. AP Photo/Marty Lederhandler

The terrorist attacks on Sept. 11, 2001, were a defining moment for a generation of Americans—a moment that brought the country together, that shattered the veneer of peace and security many Americans clung to, and that catapulted the country into another war on the other side of the globe. Many of us remember where we were and what we felt the moment we learned about the planes crashing into the World Trade Center, the symbol of Americans’ financial prowess. Earlier this year World Journalism Institute students in Sioux Center, Iowa, asked locals to describe the moment they learned about the attacks.

WHEN A RECEPTIONIST at the Connecticut Department of Motor Vehicles turned up the volume on the television, the line of people that had been shuffling all morning stood still. Janelle Phinney abandoned her car emissions paperwork. The television—mounted above the service counter—showed smoke pouring from the World Trade Center’s north tower. A plane had just crashed into it, the anchor said. The approximately 50 people in the lobby couldn’t look away. They were frozen, silent.

But Phinney, a master’s student at nearby Yale University at the time, had errands to run that morning and class to attend in the afternoon. She still needed to withdraw money from the bank to pay for new vehicle registration stickers. So Phinney signed the required forms for her car’s emissions test and exited the downtown New Haven building.

The second plane hit the south tower during her 15-minute drive. Phinney pulled into the Chase Bank parking lot moments before banks across America closed in fear of a terrorist attack on the financial system. For six days the New York Stock Exchange shut down, signaling the beginning of an economic downturn caused by the events of 9/11.

That evening, Phinney’s choir director allowed students to keep their cell phones out during rehearsal. Though universities across the country canceled classes following the attack, Yale remained on schedule.

The choir sang a solfege singing exercise for a warm-up. A cell phone rang. The room fell silent. It was a friend of a choir member: The caller had been stuck on a train in New York City all day but was OK. Phinney and the others returned to the solfege. Then, another ring tone. What is happening? Phinney thought.

She remembers several of her choir-mates trying to reach friends and family that day. But the volume of calls jammed phone lines. While others managed to confirm the safety of their loved ones that evening, some didn’t make contact for two or three days, said Phinney, who now lives in Iowa. 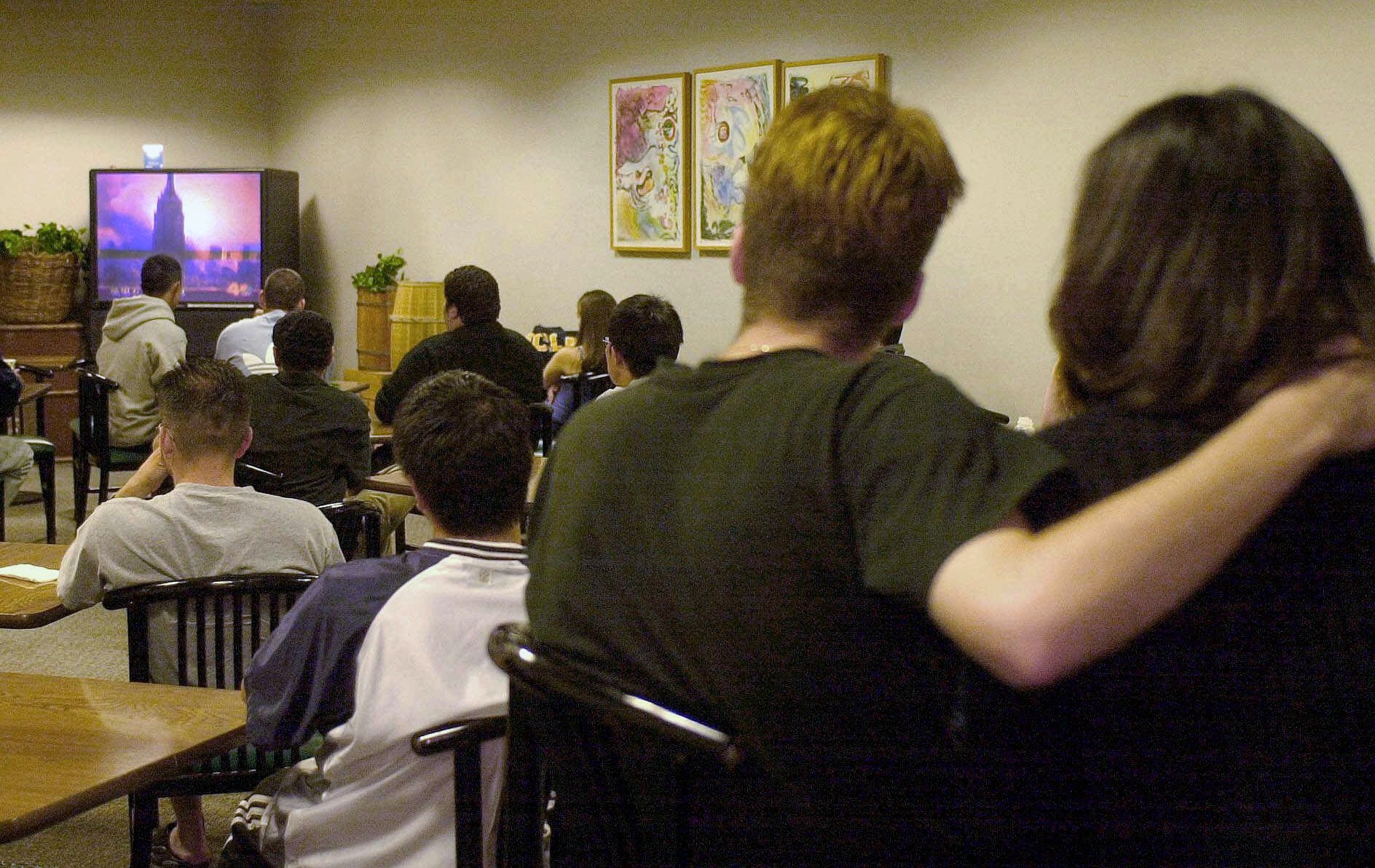 On Sept. 11, 2001, students and others at Ackerman Student Union at UCLA in Los Angeles watch TV coverage of the terror attacks on New York City. AP Photo/Reed Saxon, file

DALE KRAAYENBRINK, 60, woke up early on the morning of Sept. 11, 2001. After milking cows on his family’s dairy farm west of Sioux Center, he ate breakfast with his kids and took a morning nap. When he woke up, TV news stations talked nonstop about a plane crash at the twin towers.

Kraayenbrink couldn’t believe what was happening, but he still had farm work to do. “It was eerie in the field, not seeing any jets in the sky,” he says.

Worried about a gas shortage, Kraayenbrink’s teenage daughter and her cousin hurried to the gas station to fill up. Kraayenbrink and his wife assured their kids they were safe. “Bad things can happen, but God is still in control,” he remembers telling them.

That evening the family gathered to celebrate the birthday of Kraayenbrink’s father. Kraayenbrink’s own birthday was also coming up, so his mom gave him his gift early: a Bible cover. Twenty years later, he still has it.

BARBARA SCHAAP REMEMBERS walking into the faculty room at Dordt College on what had seemed like a normal school day. A small tube TV played in the room, and she watched scenes of the attack unfold, sending shivers down her spine. A day earlier, Schaap had flown out of Washington state, where she’d been visiting her granddaughter.

“I just wonder what would have happened if I flew in a day later,” says Schaap.

Her husband, Jim, was teaching a creative writing class the day of the attack. He drove his first class of students out to a ghost town west of Sioux Center. The students sat in the town’s cemetery and wrote in their creative writing notebooks, unaware of the tragedy unfolding. Jim Schaap drove them back to campus and picked up his second class. There, he and the second class of students heard the news on the radio. Still, he drove them to the same ghost town cemetery, but this time one student brought the radio.

In the cemetery, the class sat, wrote, and listened. 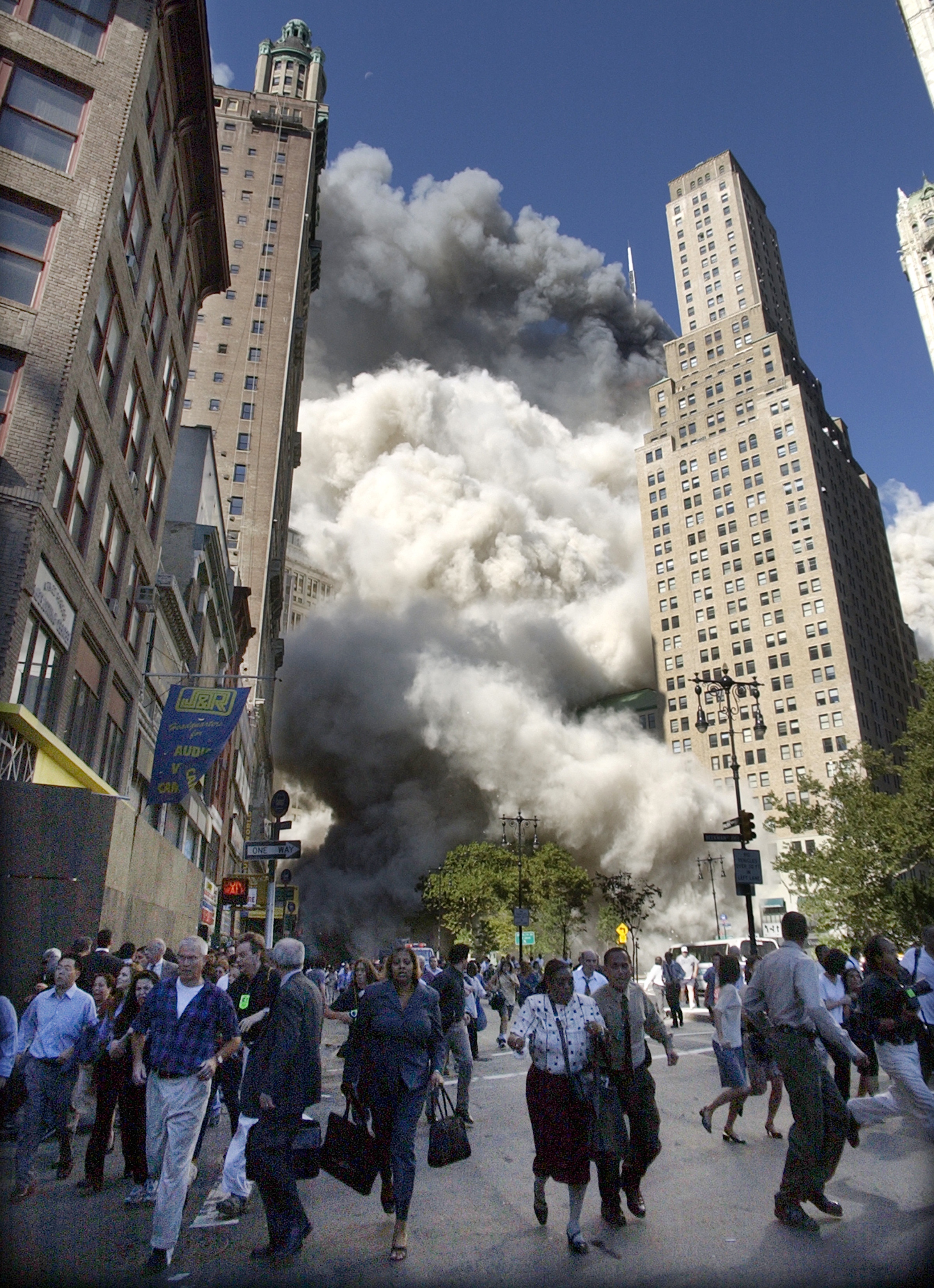 NATHAN NYKAMP, A SOPHOMORE in high school, walked into his classroom on Sept. 11 and found a group of students huddled around the single box television in the corner. His history teacher, a veteran, stared at the screen. His normally stern face bore a look of concern his students had never seen before. The live news feed zoomed in on the black clouds bursting out of the side of the World Trade Center’s north tower.

When Nykamp walked into his house, he found his dad in a similar state. It had been 60 years since Pearl Harbor, the last attack on American soil. After years of national security, American citizens felt shocked.

“I had grown up when the Persian Gulf War was going on, and [Dad lived] during World War II,” Nykamp said. “But this is the one that rattled him and that spooked me for sure.”

THE REV. MARY ANNE NELSON-LOEFKE was on the other side of New York state that morning, enduring the tedium of the jury selection process at a Niagara Falls courthouse. A judge stepped into the room and dismissed them all. A plane had flown into the World Trade Center, he said.

At first Nelson-Loefke snickered, thinking it was a joke.

Instead, it was the beginning of several stressful weeks for her family. Nelson-Loefke’s husband, Bill, was a fire chaplain visiting Canada at the time. A police escort allowed him to cross the closed border, and he went to ground zero to spend two weeks supporting the recovery efforts.

Workers rescued the few survivors in the rubble by Sept. 12, but cleanup continued for weeks, with chaplains praying over the bodies and remains of victims recovered from the site. The cleanup officially ended the following spring.

Spiritual interest among Americans surged amid the disaster, but only temporarily. New York City’s Redeemer Presbyterian Church nearly doubled in attendance the first Sunday after the towers fell. The weeks after 9/11 saw a 25 percent increase in American church attendance, according to The Wall Street Journal. Yet as early as November 2001, that increase returned to pre-9/11 numbers, a Barna report found.

LISA LEUSINK, 63, remembers emerging from cataract surgery 15 minutes after the second plane hit and entering a world forever changed. Her fuzzy brain could barely comprehend her husband Ron’s breathless news. For the rest of the day, Leusink was glued to the television. Though the numbing agent wore off, the scope of the tragedy continued to boggle her mind.

Five years later, Leusink walked slowly behind the hearse of a relative—the son of Ron’s cousin—as people lined the streets. Lance Cpl. William J. “B. Jay” Leusink enlisted in the U.S. Marine Corps after 9/11 and died in 2006 at the age of 21, mortally wounded during military operations in Iraq. The townspeople packed into the Sioux Center High School gym for the funeral. He became “a son of the town,” Lisa Leusink reflects.

B. Jay was one of more than 7,000 troops killed in action during the wars in Iraq and Afghanistan since 2001. His name is engraved in one of several marble slabs that encircle a torch bearing the inscription “Lest We Forget” in the middle of Sioux Center.

ON SEPT. 11, Delaney Carreom’s father was on another routine business trip to Chicago. His seemingly ordinary flight quickly became tense as he and other passengers got news of the terrorist attack while in the air. His mind raced with thoughts of his family, those who lost their lives, and fear. He was terrified his plane might also be targeted.

“It’s scary. Chicago is such a big city and could have been targeted,” says Delaney, who is 15. “I am so thankful that my dad is OK.” Although she was born five years after 9/11, she believes the event has impacted her life.

“It’s crazy how much I still think about 9/11. Like, if something had happened to my dad, I wouldn’t be here today,” Delaney said. “It’s really sad.” 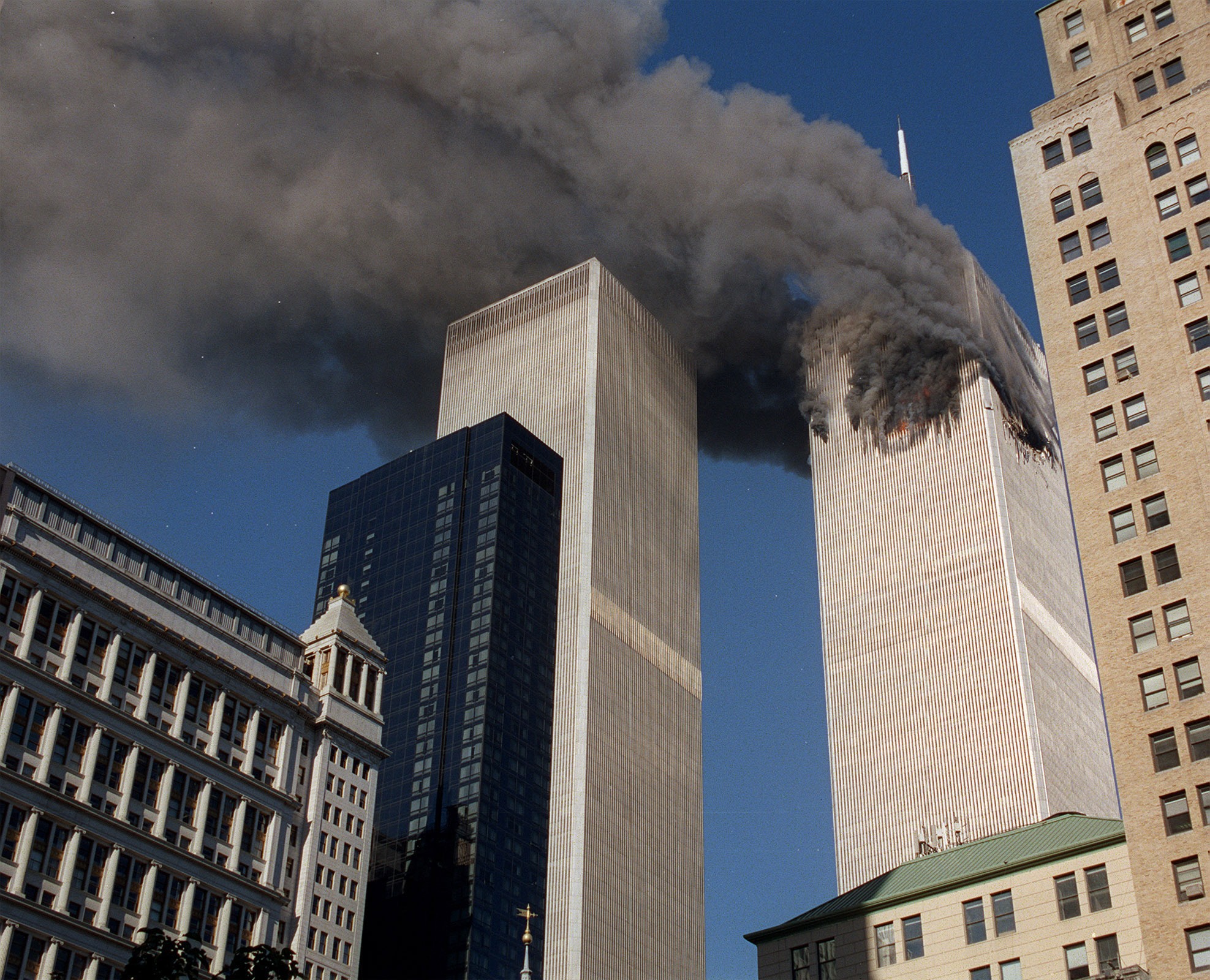 Smoke billows from one of the twin towers after an airplane hits the building on Sept. 11, 2001. A second plane hits the second tower minutes later. AP Photo/Chao Soi Cheong 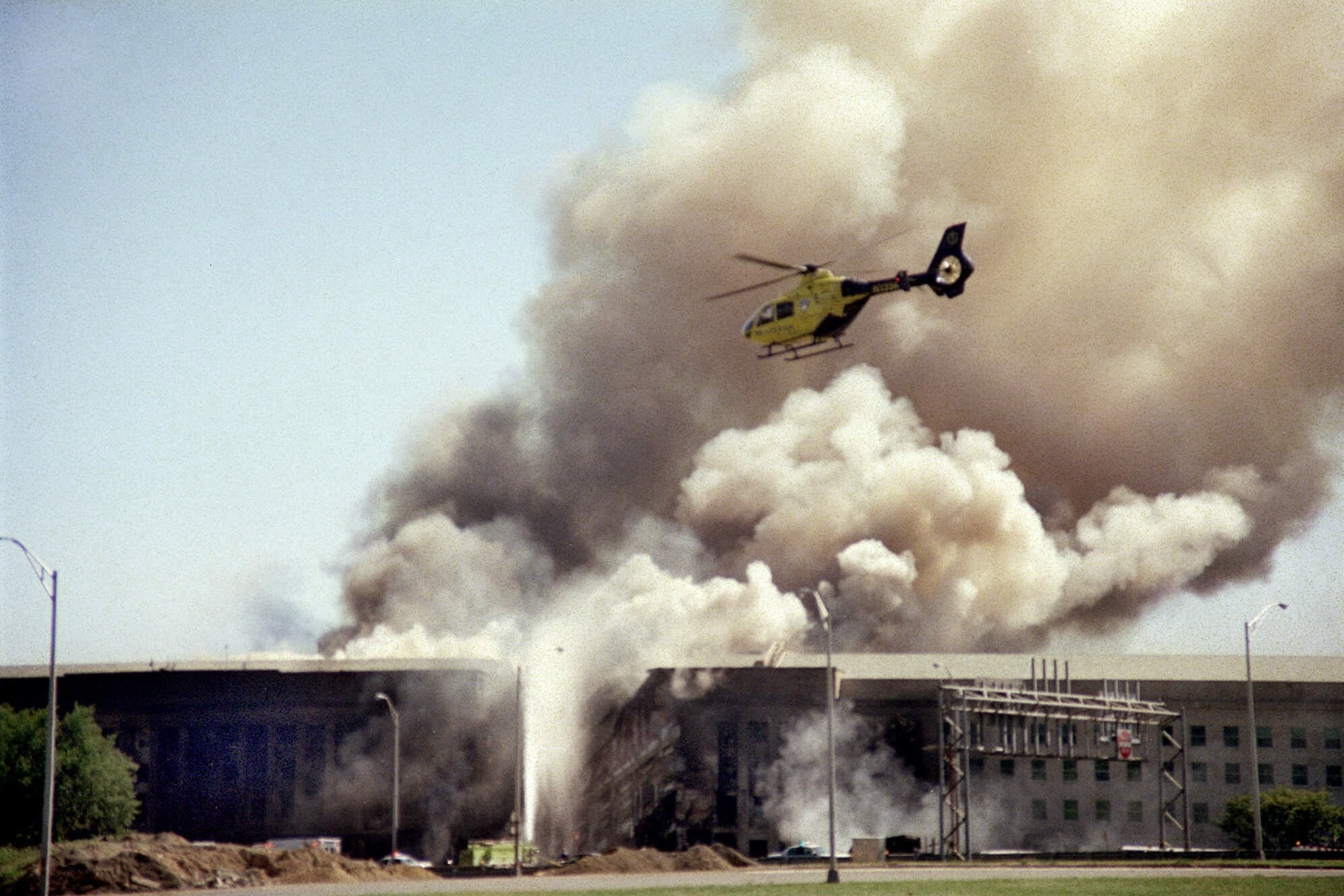 A helicopter flies over the Pentagon in Washington after terrorists crashed an airplane into the complex. AP Photo/Heesoon Yim 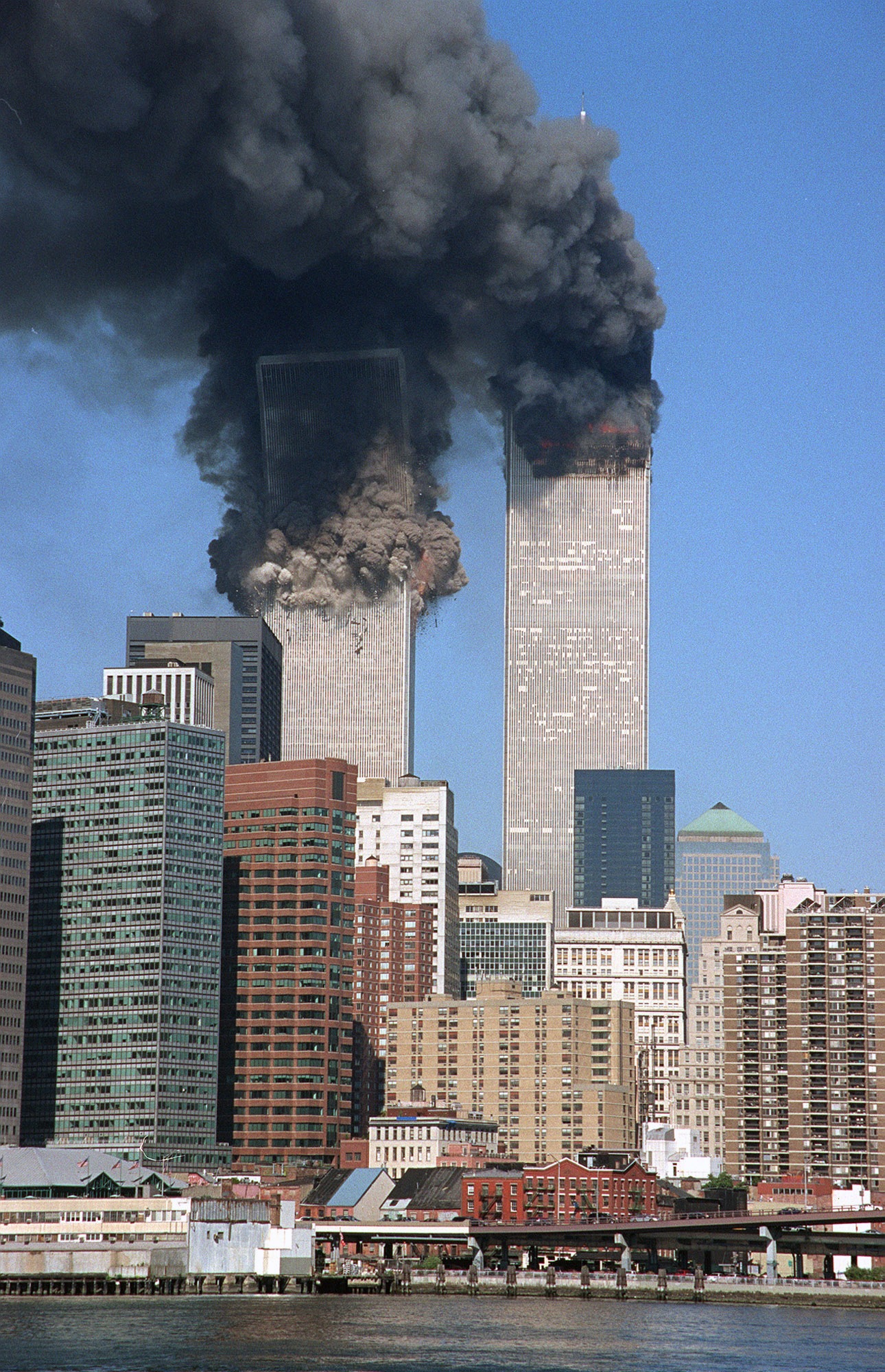 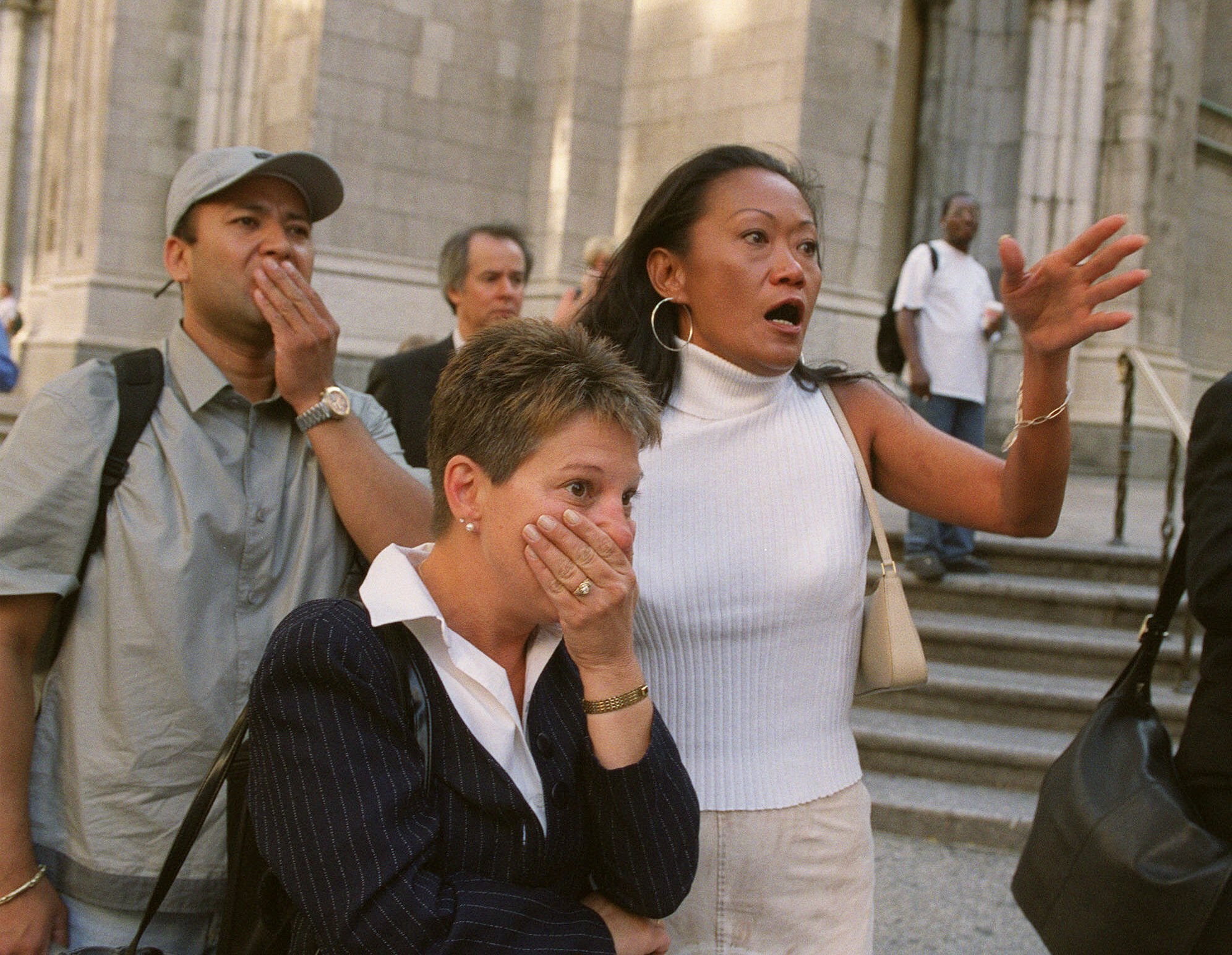 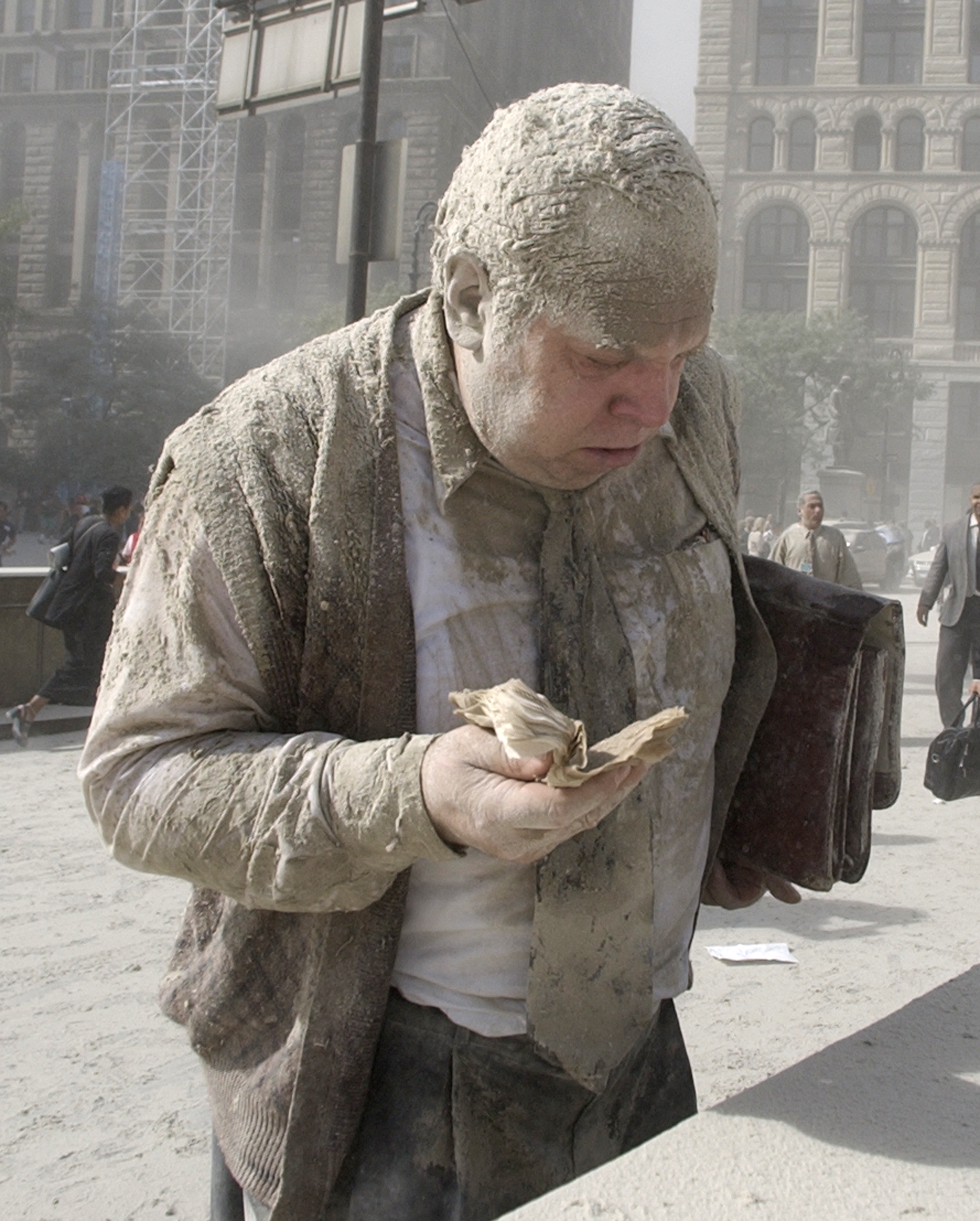 A man is covered in dust and ash near City Hall in lower Manhattan. AP Photo/Amy Sancetta 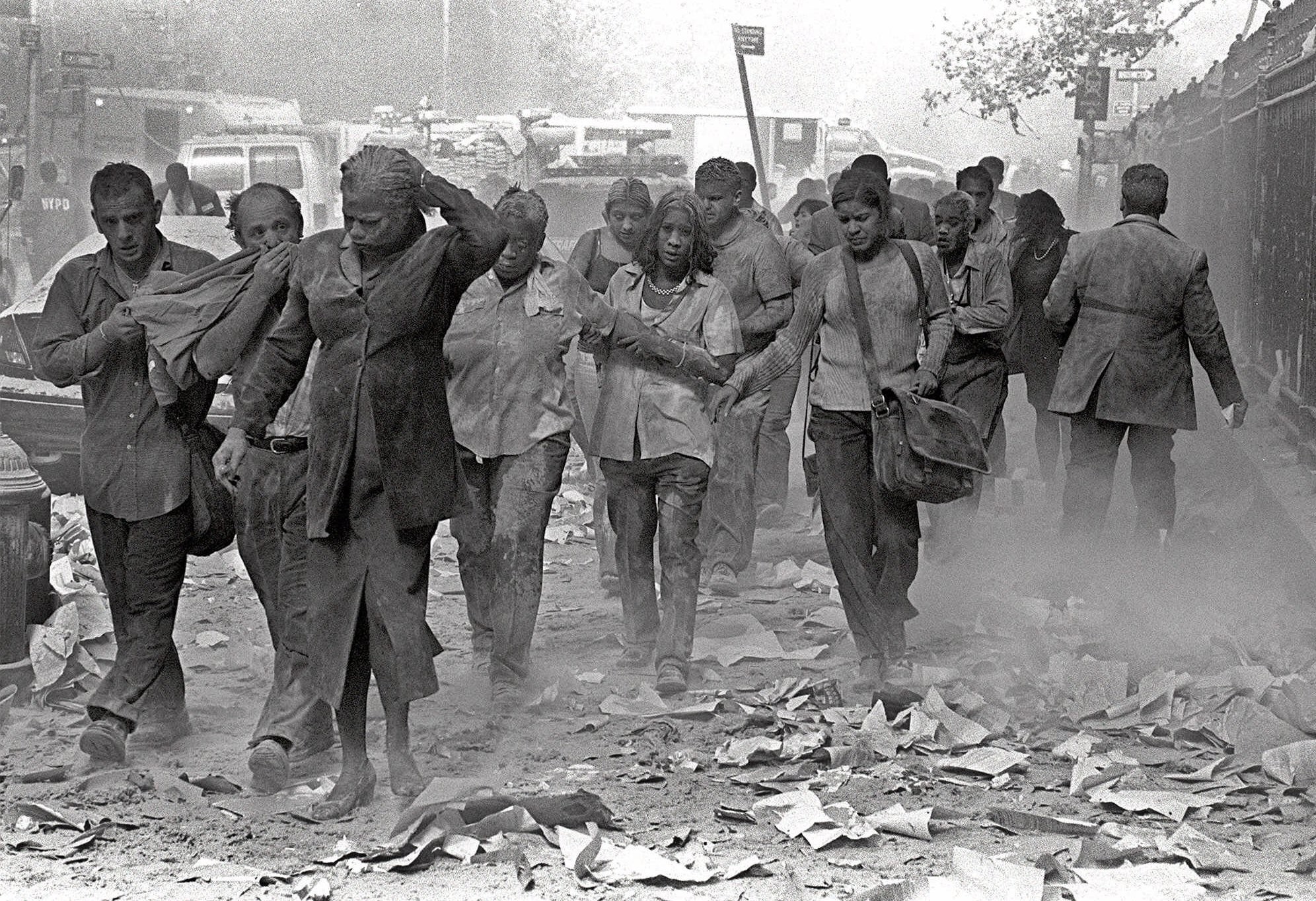 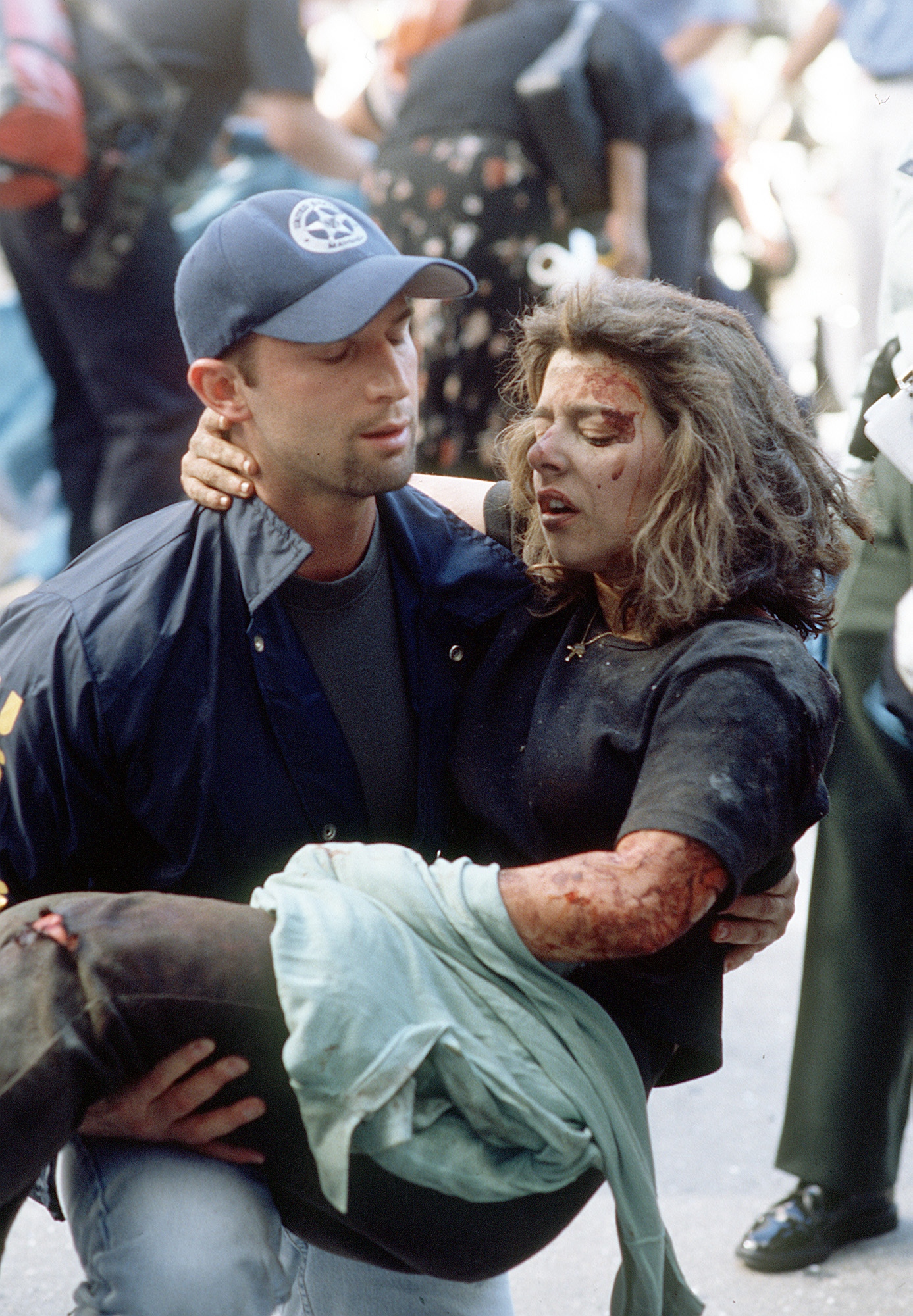 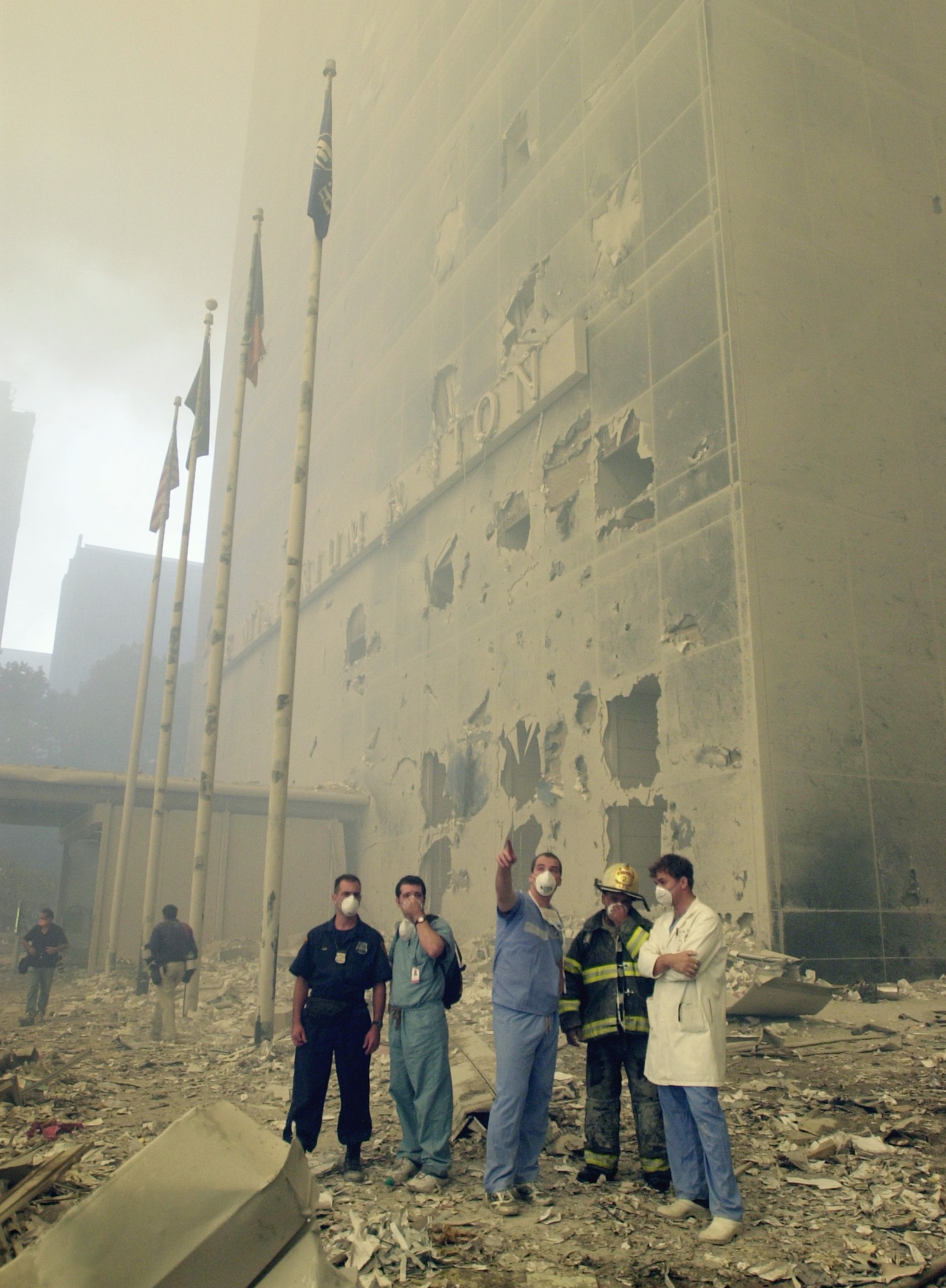 Medical and emergency workers, standing in front of the Millenium Hilton, look toward the site of the collapsed towers. AP Photo/Mark Lennihan 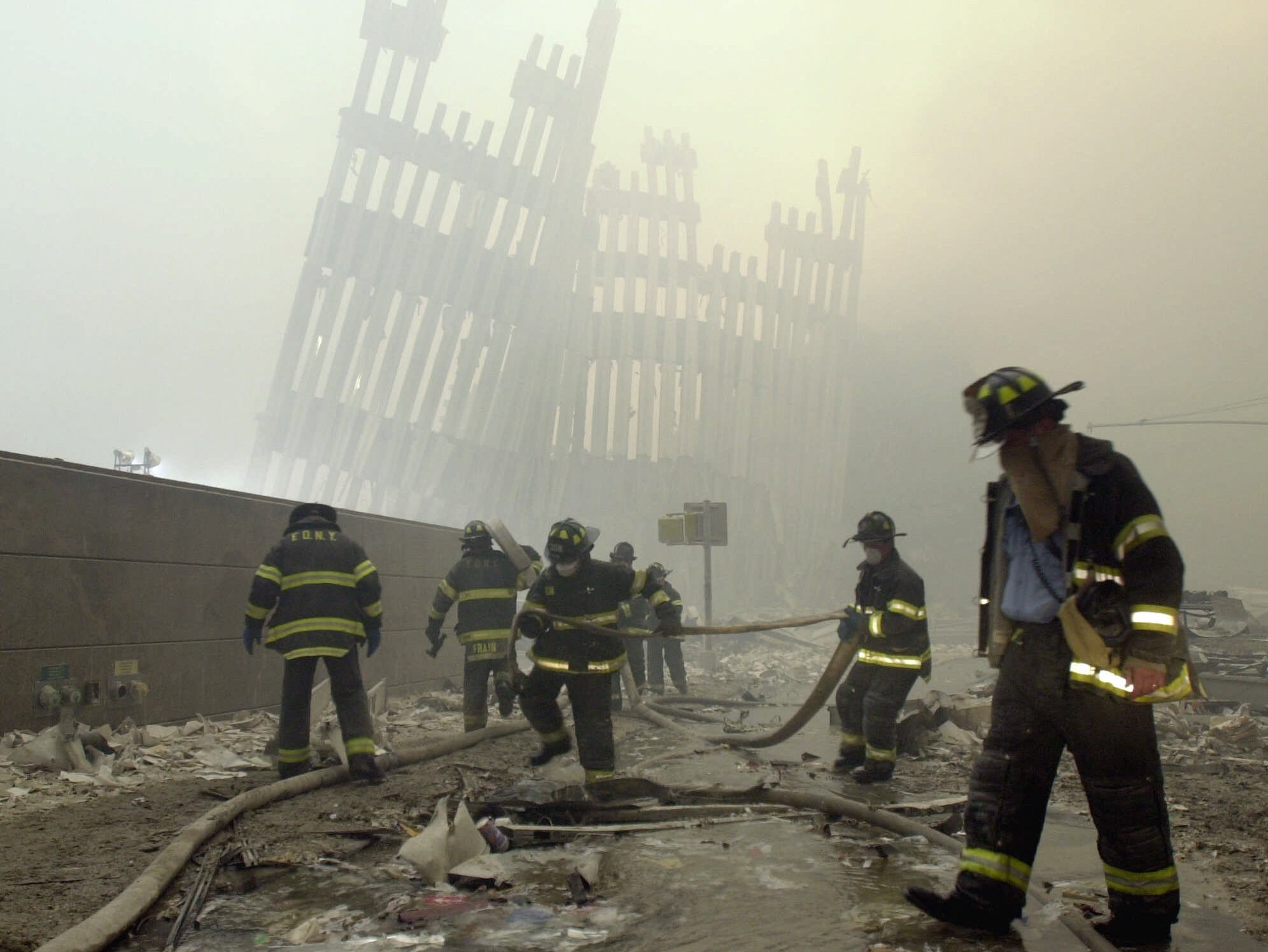 With the skeleton of the twin towers in the background, New York City firefighters work amid debris at ground zero. AP Photo/Mark Lennihan 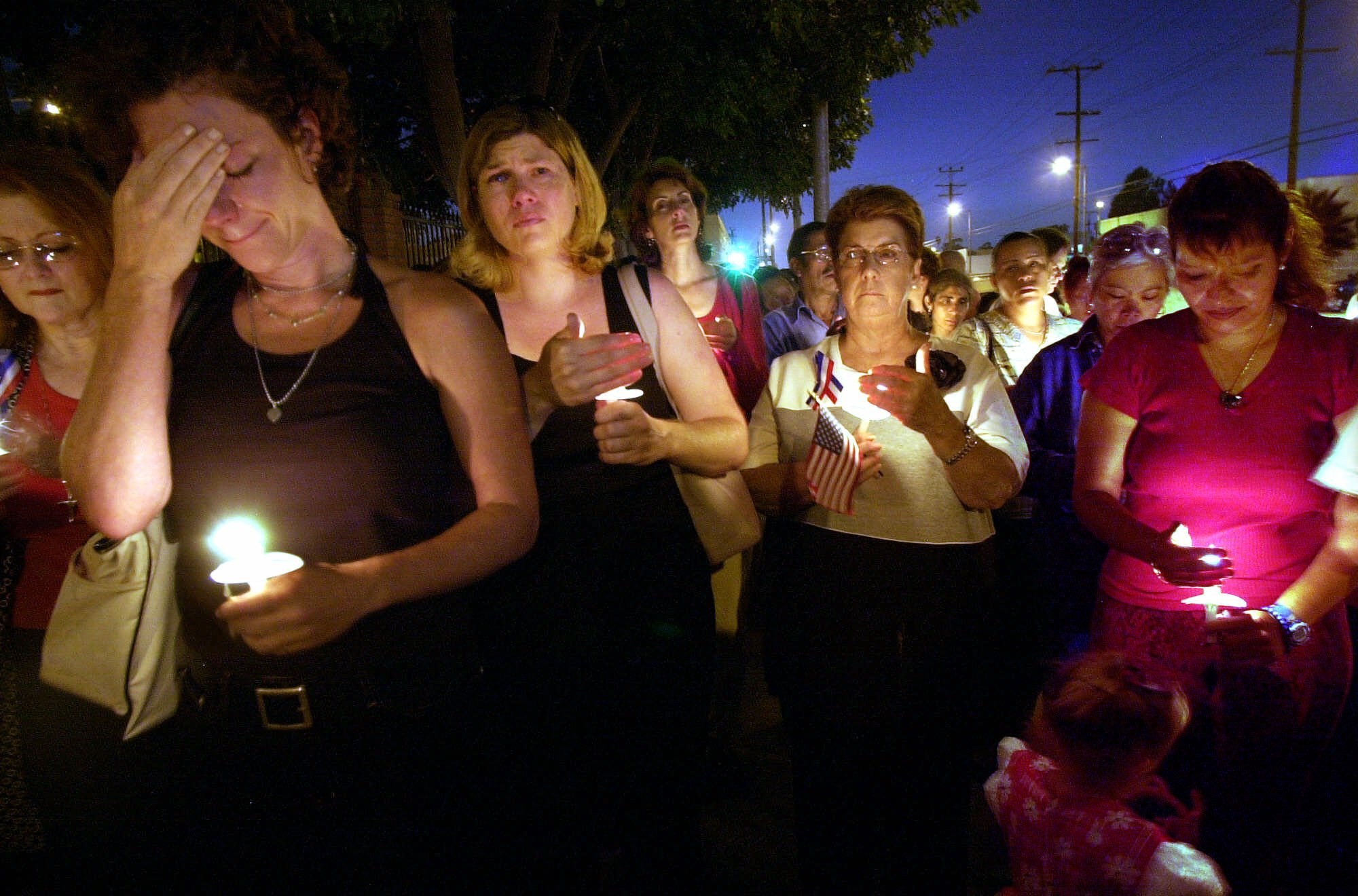