The legend of Norma McCorvey

In AKA Jane Roe, the subject is reduced to figurehead status once again

Norma McCorvey in the documentary AKA Jane Roe. FX via AP

It’s a strange thing: The documentary AKA Jane Roe hit Hulu and FX five days ago, generating thousands of headlines featuring words like “stunning” and “shocking,” yet almost no major media outlets have formally reviewed it. As I write this, only nine publications have posted critiques to the popular review aggregator site Rotten Tomatoes. Only four of those are something bigger than niche webzines.

This means The New York Times, HuffPost, USA Today, the Los Angeles Times, The Washington Post—all publications that received early access to the film—haven’t, so far, shown interest in it beyond the roughly two minutes in which Norma McCorvey makes her revelations.

That’s significant because the purported aim of the film is to give us an understanding of the “real” Jane Roe. Yet director Nick Sweeney makes little actual attempt to do that. Over two hours, he allows McCorvey to frame her own legend as it suits her, failing to push her beyond the personal animosities and alliances she feels in a particular moment. 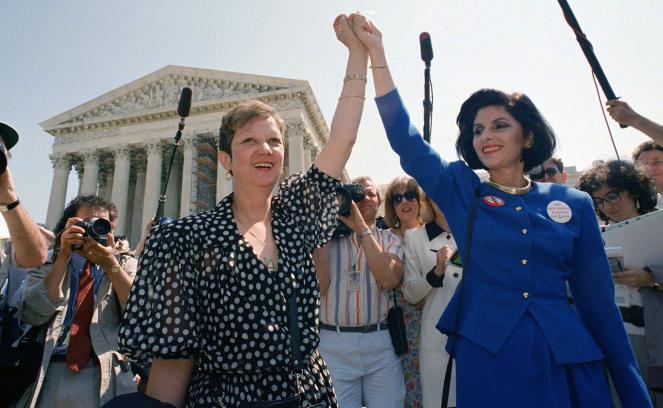 McCorvey, left, and her attorney Gloria Allred hold hands as they leave the Supreme Court building in 1989. J. Scott Applewhite/AP

Everything that comes before and after McCorvey’s “deathbed confession” is engineered to serve the big twist—that her pro-life conversion in the 1990s was an act. She did it, she says, pugnacity and defiance writ plain on her face, for the money. Ta-da! Sweeney the magician pulls the tablecloth from under the neatly set pro-life narrative. The abortion-friendly press goes wild.

Lest we miss the point, there’s an immediate replay, screen juddering to underscore the significance of McCorvey’s admission. The camera then cuts to lingering reactions from pro-choice representatives. Gloria Allred gasps. Frustrated tears well in abortion activist Charlotte Taft’s eyes.

But how real is this? McCorvey herself gives us reason to question. By her own self-assessment, she delights in provoking dramatic responses. The obvious solution, then, would have been for Sweeney to show McCorvey the footage of Allred’s and Taft’s responses and record her reaction closely. Instead, he allows her to keep striking swaggering poses, without cross-examination.

“I was the big fish.” “I’m a good actress.” “I like attention.” These kinds of statements are common to the confessional booth on reality shows like The Bachelor, but we expect more from a documentary. Sweeney never probes the places where McCorvey’s bravado is inconsistent with her actions. 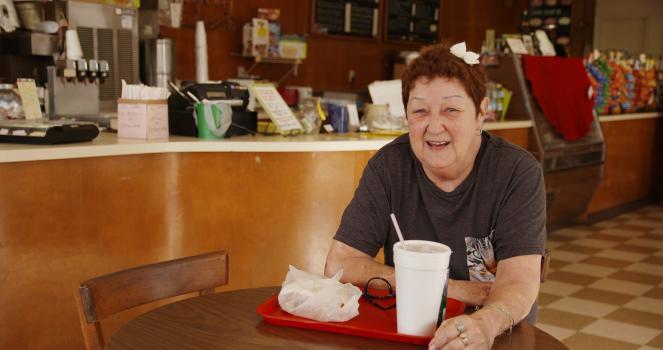 McCorvey in the documentary <em>AKA Jane Roe</em>. FX via AP

It’s a shame, because in a few unguarded moments in AKA Jane Roe, something deeper of McCorvey comes through. We see the instinct for survival bred from a wrenchingly hard life.

For example, viewers get broad strokes of McCorvey’s childhood exactly as she tells it. She’s attracted to girls, so she ran away to an Oklahoma hotel room at age 10 and had a sexual encounter with a female friend of the same age.

It would be an understatement to say an encounter like that, so early in life, raises the question of whether McCorvey suffered abuse before the incident. Incredibly, Sweeney doesn’t ask. Instead, he does what he accuses the pro-life movement of doing. He frames the event to suit his agenda: McCorvey’s lesbianism equals thwarted identity.

Again and again, Sweeney shrinks from conflicts that have the potential to offer the most insight, like when Taft admits Roe v. Wade lawyers chose McCorvey because she was poor, inarticulate, and uneducated. He never challenges McCorvey to respond directly to Taft’s characterization. He also allows her to shrug off the fact that she lied about being raped in her influential legal case. The breadth of McCorvey’s ways and days are there, but not the depth.

The tragedy (and, for Christians, the lesson) of Norma McCorvey’s life is that her identity had become so intertwined with her legal case, she didn’t seem to know who she was or what value she had apart from it. She holds out the significance of her life story as a carrot, then, understandably, resents it when the world once more reduces her to a figurehead.

Both the documentary and the coverage it generated fail her in the same old way. In AKA Jane Roe, McCorvey is a symbol still.