Professor Gregory Rummo with a conch shell that he found 10 miles from the coast. Handout

The report, though, did not present any case studies to support those concerns, so WORLD examined one specific bias claim in an attempt to see how Facebook’s fact-checkers work. Before we get to our analysis, though, it’s important to understand the power Facebook has.

The basics: Many people get their news from social media instead of news websites. Facebook, given charges of “fake news,” relies on five outside fact-checking groups: PolitiFact, the Associated Press, FactCheck.org, Science Feedback, and Check Your Fact. Conservatives often criticize the first four. The fifth is a subsidiary of the right-leaning Daily Caller. The International Fact-Checking Network (IFCN), part of the journalism think tank Poynter Institute, certifies the fact-checking organizations.

Individual fact-checkers at those organizations then rate posts social media users have flagged or that the fact-checkers themselves question. Facebook demotes in its news feed posts that contain (according to fact-checkers) false claims or false headlines. That means fewer views, likes, and comments for the publisher. Demotions can turn into lost opportunities to advertise or monetize through Facebook, warnings on Facebook pages, and loss of designation as a news page.

OUR CASE STUDY begins in July when chemistry professor Gregory Rummo learned via Twitter that Townhall.com, a conservative news site, had retracted his recently published column, “Apocalyptic Sea-Level Rise—Just a Thing of the Past?”

Rummo was surprised. A week earlier a Townhall.com editor had emailed him to say a Facebook fact-checker had flagged his column as “false news.” Rummo sent the editor information to validate the article and assumed that would resolve the issue. But it didn’t.

Facebook ordered Townhall.com to remove Rummo’s article because of the “false news” flag.

If Townhall.com refused, it could face the penalties Facebook levies against “false news” publishers: demoted posts. No designation as a news page. No ability to make money through ads.

Rummo writes for the Cornwall Alliance, a group of Christian scholars and scientists known for their stance against “climate change alarmism.” The organization has about 200 articles published in various outlets per year, says Cornwall Alliance founder Calvin Beisner, but this is the first article to be retracted.

Townhall.com never told Rummo why it purged his article—not just from Facebook, but also from Townhall.com. Townhall.com editor Leah Barkoukis did say in an email to Beisner that Facebook “would not accept anything but a retraction,” even after Rummo and Beisner sent research to back up Rummo’s claims.

Who decided Rummo’s column was false news? Climate Feedback, a division of Science Feedback, fact-checked Rummo’s article and posted the analysis to its website. According to the fact-checker’s website, “The Science Feedback editor provides feedback to the journalists and/or editors of the outlet of the original article reviewed.”

But Rummo never heard from Climate Feedback—other than a tweet boasting the article’s retraction with what Rummo called “lethal triumphalism.” It tagged Rummo and Palm Beach Atlantic University, where Rummo teaches.

Townhall.com replaced Rummo’s article with a note saying the column “incorrectly cited a graph.” But Rummo accurately referenced a graph that “shows two previous periods when temperatures were warmer than they are now,” namely the Roman Warm Period and the Medieval Warm Period. Rummo says his article, which focused on sea level rise, “wasn’t really breaking any new ground” by including the graph.

If climate scientists disagree with the cited study’s findings, they should take issue with the study itself, Rummo says. Climate Feedback’s report calls Rummo’s citation of the graph “factually inaccurate” with “flawed reasoning” even though Rummo accurately stated what the graph showed. “It wasn’t really a fact that was incorrectly reported,” he said. “It was the fact that [Climate Feedback reviewers] don’t like.”

Climate Feedback subscribes to the IFCN code of principles, which requires a commitment to nonpartisanship, fairness, and an “open & honest corrections policy,” among other qualifications. Rummo and Beisner don’t consider the retraction nonpartisan or fair. The IFCN says it expects “fact-checkers to be more committed to correcting the record than anyone else” and requires its members to have “robust corrections policies.”

Is it possible to appeal the decision? Technically, yes. Townhall.com would need to appeal to the fact-checkers that found issue with Rummo’s article. But the website hasn’t appealed. I asked Townhall.com editors about the decision, but they did not respond to my phone calls or emails. They seem to be following the adage “Don’t poke the bear.”

Rummo also decided against appealing because he didn’t want to “stir up the hornet’s nest.” Whether or not fact-checkers agree with Rummo’s claims, Facebook’s ability to silence one side of an argument is alarming. And Rummo wasn’t even debating the amount or cause of global warming now: He was referring to a scholarly report on temperatures two millennia ago.

WHAT’S NEXT? Last month Facebook gave fact-checkers free rein of Instagram as well. Instagram (which Facebook owns) will limit the audience reach of “false information” posts by downplaying them on the site’s “Explore” page. The concept is comparable to Facebook’s, except Instagram users won’t even be notified when their posts are flagged.

Facebook/Instagram now wields doubly dangerous authority. Its fact-checking partnerships are intended to limit the spread of false news. But if fact-checkers are biased or just mistaken, they can stifle debate and even historical research that challenges current pieties.

Facebook last month announced new initiatives to address perceived anti-conservative bias: Four staff members will now deal with bias complaints. Facebook also announced it will appoint an oversight board with “a diverse range of intellectual viewpoints.” We’ll see whether that result is different from Google’s: When some on the left protested the appointment of Heritage Foundation head Kay Coles James to an ethics board, Google dissolved the board before it ever met.

—This article was corrected to reflect that the Cornwall Alliance has about 200 articles per year published in various outlets. 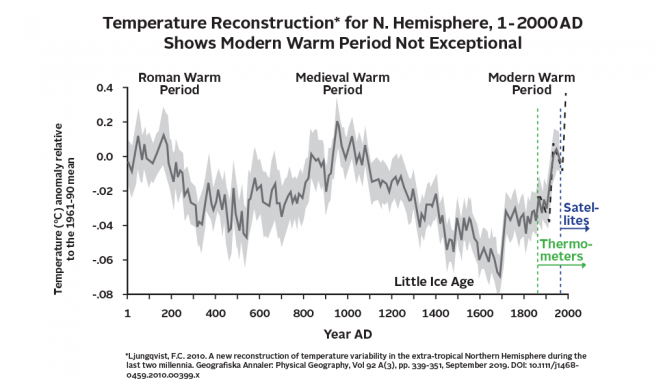 A copy of the graph that Rummo used to validate the position taken in the article that Townhall.com retracted Geografiska Annaler: Physical Geography

What are the facts?

Facebook’s fact-checker considered nonfactual an article showing a graph indicating that the Roman Warm Period actually happened. He could have read an expert account on the matter by a distinguished professor of classics, with vetting by a major university press.

In The Fate of Rome: Climate, Disease, & the End of an Empire (Princeton, 2017), Kyle Harper discusses why the two centuries on each side of A.D. 1 were so glorious for Rome. He gives considerable credit to global warming, or at least to the “Roman Warm Period” (also called the Roman Climate Optimum, or RCO). Contemporary comments, melted Alpine glaciers, tree rings, and other evidence left Harper believing that “warmth, precipitation, and stability characterized the RCO in the circum-Mediterranean.”

Harper also notes that high, stable solar activity and low volcanic activity contributed to Roman warmth. (Vesuvius was an exception.) Harper’s summary: “The climate was the enabling background of the Roman miracle. The RCO turned the lands ruled by Rome into a giant greenhouse.” Then cold centuries came, and “one of history’s most conspicuous civilizations found its dominion over nature less certain than it had ever dreamed.” —Marvin Olasky