“The end of Hong Kong”

Police officers react to members of the Democratic Party holding a banner and placards during a protest in front of the Chinese central government's liaison office in Hong Kong on Friday. AP Photo/Kin Cheung)

Crossing the border between mainland China and Hong Kong has always illuminated stark differences. On one side, the internet is censored, any dissent could lead to imprisonment, unregistered churches meet quietly, and the Chinese Communist Party rules with an iron fist. On the other, people access a free internet, protest for their freedoms, worship freely, vote for some of their lawmakers, and have long enjoyed one of the world’s freest economies.

Yet the differences that helped make Hong Kong an international financial hub will likely disappear since Beijing has decided to enact a sweeping national security law in Hong Kong, bypassing local lawmakers. Many decry the action as the end of the “one country, two systems” framework that promised Hong Kong autonomy to develop separately from the mainland.

The national security law would ban “treason, secession, sedition, and subversion,” and criminalize foreign influence. The Chinese government considers much of the dissent and criticism of the central government to fall into those categories. Wang Chen, vice chairman of the Standing Committee of the National People’s Congress (NPC), said the government needed to stop democracy protests that began last June, which China attributes to anti-China forces and foreign interference.

A draft decision submitted at the annual NPC Friday also noted that “when needed, relevant national security organs of the Central People’s Government will set up agencies in Hong Kong to fulfill relevant duties to safeguard national security in accordance with the law.” This could include agents of the Ministry of State Security (China’s intelligence agency) or other powerful state security agents the local government can’t regulate. The legislation could pass as early as next week.

The Hong Kong government tried to pass a national security bill in 2003, which sparked a 500,000-person protest on the streets of Hong Kong as people feared it would restrict their freedoms. In response, then-Chief Executive CY Leung agreed to shelve the law. Last year, citizens took to the streets to protest an extradition law that could have led to Hong Kong residents standing trial in mainland China, again pointing to Beijing’s encroachment. Even after officials shelved that law, protests intensified against the city’s unelected leadership and police violence.

The coronavirus pandemic paused the protests in the past few months, but recently pro-Beijing lawmakers have yet again taken up the issue of a national security bill. Because of continued opposition from the Hong Kong people, Beijing decided to bypass the legislature altogether and impose the bill itself as the rest of the world continues to deal with the pandemic.

Hong Kong citizens fear the Chinese government limiting their speech. Many began to install virtual private networks (VPNs) to mask their internet usage in case the government imposes the Great Firewall of China on Hong Kong. VPN provider NordVPN said downloads in Hong Kong were 120 times higher than usual on Thursday when the law was announced. Large protests are likely this weekend—protesters had previously scheduled a march to oppose another law that would make insulting the national anthem illegal. 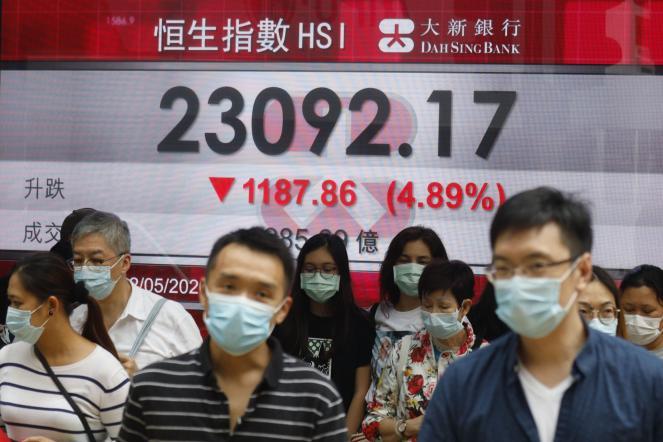 People wearing face masks walk past an electronic board showing a stock index outside a bank in Hong Kong on Friday. AP Photo/Kin Cheung

In addition, the law could hurt Hong Kong’s preferential trade agreements with the United States. Under the Hong Kong Human Rights and Democracy Act, the State Department must annually assess whether Hong Kong has retained enough autonomy to qualify for favorable trading terms. If it doesn’t, the United States could end some of the privileges Hong Kong now enjoys.

State Department spokeswoman Morgan Ortagus criticized Beijing’s move on Thursday: “Any effort to impose national security legislation that does not reflect the will of the people of Hong Kong would be highly destabilizing and would be met with strong condemnation from the United States and the international community.”

Republicans and Democrats in Congress were working toward a bill to impose sanctions on China in response.

Hong Kong’s government has also extended coronavirus restrictions on gatherings larger than eight people until June 4, thus banning the annual commemoration of the Tiananmen Square Massacre for the first time in 30 years. It is the largest such gathering worldwide. Organizer Lee Cheuk-yan believes the move is politically motivated, but encouraged Hong Kong citizens to light candles across the city to “condemn the massacre and mourn for those who died in 1989.”