The demise of compassion

A political history of the last 20 years

July 31 marks 20 years since a Philadelphia evening beckoned well for both Republicans and a grand old country that needed a new birth of freedom and compassion. Instead, these 20 years gave us big-donor tax reform, war, recession, Black Lives Matter, and ego. 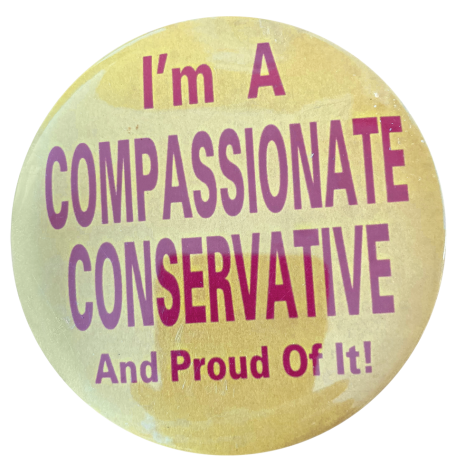 The button shown here was one many delegates and audience members wore at the 2000 Republican National Convention in Philadelphia. I was there on July 31. The button reflected the campaign slogan of president-to-be George W. Bush. He pledged to “encourage an outpouring of giving in America. … We will give people who don’t itemize the same treatment and incentive as people who do, rewarding and encouraging giving by everyone in our society, not just the wealthy.”

How? Bush was specific: “We will provide for charity tax credits—credits which will allow individuals to give a part of what they owe in state taxes directly to private and religious institutions fighting poverty in their own communities. Individuals will choose who conducts this war on poverty—and their support won’t be filtered through layers of government officials.”

Sadly, the Bush administration in 2001 dropped that key decentralizing component of compassionate conservatism. The reason, as far as I’ve learned: Charity tax credits would mean less revenue for the IRS. Big GOP donors wanted something else that would also cost the Treasury: an end to the estate tax. That took priority.

Then came war in Iraq. Democrats would fund it only if Republicans expanded welfare. The deal ruined the reputation of compassionate conservatism, transformed from a small government measure to a euphemism for big spending. Part of falsely labeled “compassion” was making home loans to people who couldn’t afford them. The collapse of that housing house of cards led to the financial disaster of 2008 and the election of Barack Obama.

Some believed the election of a black president would ease racial tensions. The opposite happened, especially as big media played up tragic results of bad policing without reporting improvements in some cities. “Black lives matter” became a good and true slogan, but the Black Lives Matter organization pledged to “disrupt the Western-prescribed nuclear family structure” by creating “villages that collectively care for one another.” BLM also pledged to “foster a queer-affirming network. When we gather, we do so with the intention of freeing ourselves from the tight grip of heteronormative thinking.”

That was obviously a red light to anyone aware of how the Bible right from its beginning embraces the norm of marriage and family. The first two chapters of Genesis teach: “God created man in his own image … male and female he created them. … Be fruitful and multiply. … A man shall leave his father and mother and hold fast to his wife, and they shall become one flesh.”

This emphasis undergirds the consolation prize God gives Adam after his tragic sin: “By the sweat of your face you shall eat bread.” Men and women work hard to prosper their families. Economic collectives have never succeeded. When communist governments implemented them in the Soviet Union and in China, tens of millions lacked bread and starved to death.

The BLM movement is utopian and un-Biblical. So are the leftists who now dominate the Democratic Party and complain about both capitalistic and “heteronormative” thinking. The Bible promotes private property as described by Micah: “They shall sit every man under his vine and under his fig tree, and no one shall make them afraid.” Jesus promotes marriage and says God from the beginning made humans “male and female.”

In 2016 compassionate conservatives gained no traction, since Team Bush had first glorified and then ruined the brand. In crucial primary elections a plurality of Republican voters gave up on persuasion and placed their hope in intimidation. In the general election, facing a deceitful candidate who emphasized “village” over family and business, Donald Trump won. In 2020 we are two nations. Power, money, and compassion abide, but the greatest of these is compassion, which neither major party candidate promotes.