Some Americans take extra precautions. Some go on with business as usual

Jessi Green stood in the middle of hundreds of people gathered at Huntington Beach, Calif., holding a loudspeaker and a Bible, and broke into tears. She told a crowd of worshippers that police officers knocked on her door that day, July 24, to deliver a citation for holding a large public gathering without a permit. “There is a possibility of us getting arrested,” she said, voice breaking, “and I just felt that was such an honor. I just never thought something like that could happen in America.”

The crowd cheered as Green read the beginning of Acts 4, in which “greatly annoyed” authorities jailed Peter and John for preaching. “There’s a lot of persecution in regards to COVID,” Green declared, passion rising. “And honestly, I believe if we all got COVID, we’ll end COVID, because we would then just go and heal the sick and raise the dead and cast out demons!”

Green is the organizer of the evangelism outreach Saturate OC. Every Friday since July 3, hundreds gathered on the beach, the vast majority not wearing masks or social distancing. The first Friday, 300 people showed up. By the third Friday, Green said more than 2,000 people attended. They huddled arm-in-arm, singing, clapping, and hugging as people stepped into the ocean to be baptized. Green told me the city of Huntington Beach had granted her a permit, but city manager assistant Catherine Jun said that’s not true. Repeated emails with Green didn’t yield any clarification.

Pictures of the giant crowd on social media drew criticism from other Christians. One person commented on Facebook, “Do you really think Jesus approves of jeopardizing the safety of thousands of people?” Another said, “You give a bad name to Christianity.” Yet others praised the organizers for their bravery, accusing the criticizers of being “cowards” and cheering Green on for “being obedient to Jesus.”

UC-Irvine epidemiologist Andrew Noymer said such events will spread the virus: “Take a step back and pause for a second: What does the virus see? It just sees lots of people together who can spread it.”

The friction is a picture of how divided Americans are over the coronavirus. Reactions to it have inflamed already-smoldering divisions, many along partisan political lines. Among evangelicals, those disagreements are also theological, with each side quoting Scriptures to justify their positions. Some, like Green, believe the church is facing incremental persecution. Pastors such as John MacArthur have released statements refusing to obey government restrictions on churches and calling for others to “stand with us in obedience to our Lord as Christians have done through centuries.” Others search for ways to limit the virus’s spread while still worshipping.

Part of the polarization stems from conflicting or erroneous reports from experts. At one point, the U.S. Centers for Disease Control and Prevention (CDC) recommended people not wear masks to preserve them for healthcare workers. Now its director says more mask-wearing could bring the pandemic “under control” in six weeks. The CDC has inaccurately counted results of coronavirus tests, and President Donald Trump has contradicted his own health officials.

Those who observed devastation firsthand say quarreling about whether to wear masks is a luxury they don’t have. Ifech Nwadie never imagined the first known “super-spreader” of COVID-19 would be in his rural community. The physician in Albany, Ga., paid attention to the virus’s spread through China and Europe. He worried the United States would suffer an outbreak, but “not in a million years was I thinking, we’re going to be hit with a massive wave in small-town America.”

The virus swept his city of 75,000 people in late February. The wave began at funerals and overwhelmed the county’s hospital. It killed more than 150 people, most of them low-income and black. Nwadie grew up in Albany and recognized many patients, and his heart ripped each time he had to call a family member to deliver bad news. He prayed for patients’ recovery. “People were shaken,” Nwadie recalled. “That’s when a lot of us sobered up about this disease.”

So it’s strange for Nwadie to watch resistance to coronavirus safety measures. When Georgia Gov. Brian Kemp reopened the state at the end of April, allowing gyms, bowling alleys, and salons to resume business, Nwadie and many other public health experts braced for another outbreak. It came mid-summer: From a seven-day average of 620 new cases per day on June 1, by late July the state’s seven-day average was almost 3,000 new cases per day. More than 3,200 people in Georgia have died with COVID-19. In Albany admissions of coronavirus patients dipped to zero at one point. But Nwadie now sees up to 60 coronavirus admissions a day in his hospital, he told me in late July. Meanwhile, though Kemp updated state guidelines to “strongly encourage” mask-wearing, he also signed an executive order banning municipalities from mandating them, saying they can’t issue restrictions stricter than the state’s.

In California, the roles are flipped: Many local leaders have resisted Gov. Gavin Newsom’s coronavirus health mandates, with some law enforcement departments refusing to enforce orders. Orange County has been one of the most vocal. It’s school board voted mid-July to recommend reopening schools without requiring masks or social distancing. County supervisors have openly questioned the county’s COVID-19 positivity rates and masks’ effectiveness. The county’s former health officer resigned after receiving death threats for issuing a mandatory mask order.

It’s also where coronavirus cases and deaths are spiking. Orange County had previously escaped the alarming outbreaks and death tolls of other counties, but it now ranks fifth of the state’s 58 counties in COVID-19 deaths per million.

Newsom ordered all places of worship to shut down indoor services and to “discontinue singing and chanting activities.” Three churches filed a federal lawsuit challenging the order. 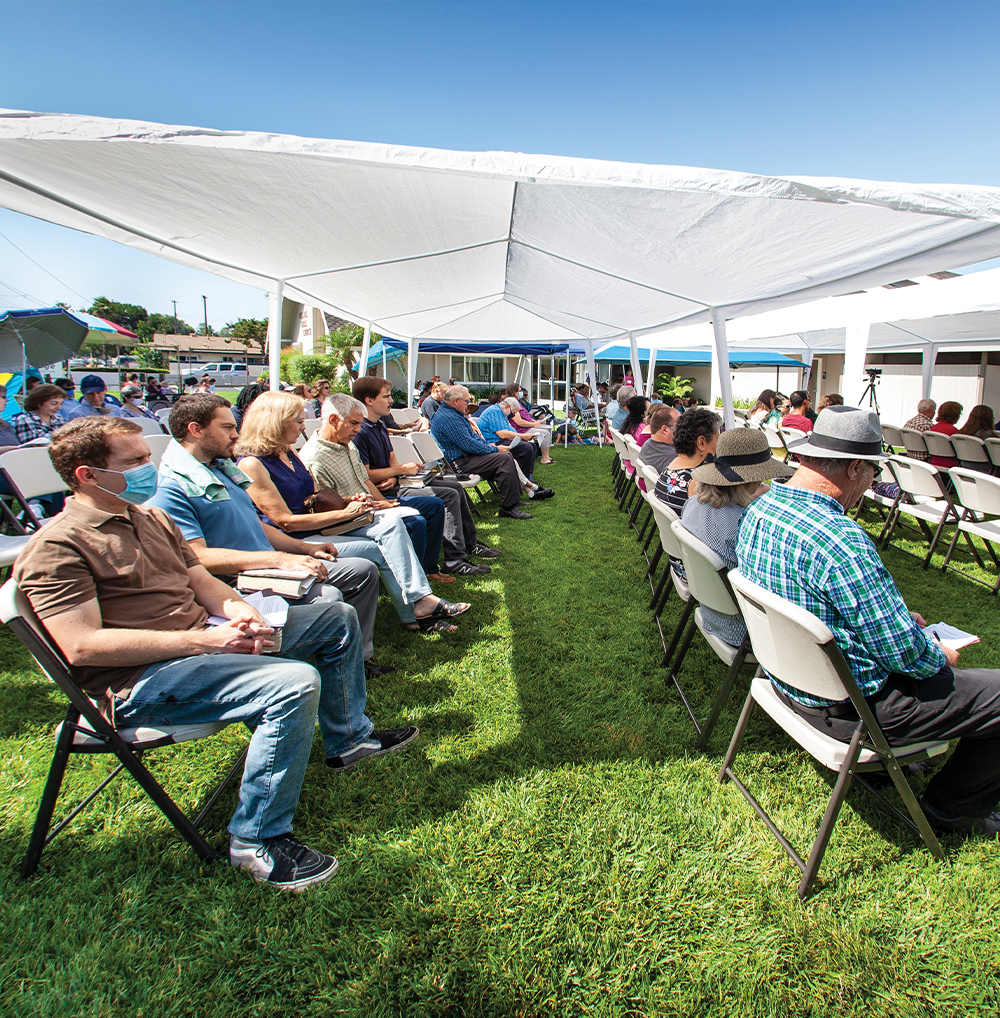 In Garden Grove, a group of elders met to discuss what to do. Village Bible Church had been holding indoor Sunday services since June 7, keeping numbers under 100, moving chairs farther apart, and suspending communion. Senior Pastor Ron Johnson told me a couple of elders suggested defying the governor’s order and continuing to worship indoors. They debated more than four hours. They read multiple Scriptures together and decided on four principles: Love God well, love others well, honor the government as much as possible, and don’t do anything to harm the church’s testimony.

Eventually they decided to move worship outdoors. After consulting several officials, they concluded the singing ban was more a guideline than legal order. “We found a creative way to both honor God and obey the government,” Johnson said.

Meanwhile in Huntington Beach, Green made a different choice. On the fourth week of her event, the city set up large neon signs declaring the event canceled. Hundreds showed up anyway.