On Aug. 18, three days after the Taliban seized Kabul, Greg Wilton tweeted, “Any Southern Baptists interested in helping Afghans as they resettle in the US? Gauging interest.”

“I’m in!” one person tweeted back. “Very interested!” another tweeted. A pastor from Columbus, Ohio, responded: “Working with a lot of refugees currently. Would love info on how to help!”

Wilton is the Care for Refugees director at Send Relief, the compassion ministry arm of the Southern Baptist Convention. Within a day of his tweet, Wilton partnered with World Relief, an evangelical resettlement agency, to put together a Care for Refugees workshop in Clarkston, Ga.

On the eve of the 20th anniversary of 9/11, about 130 individuals showed up in person to learn how Christians can respond to the ballooning numbers of Afghan refugees and immigrants entering the United States. An additional 200 households, church groups, and individuals livestreamed the event. That morning, Send Relief President Bryant Wright implored Christians to welcome and love refugees and immigrants: “Oh Church, let us not miss this incredible opportunity! Let us rise to the occasion and opportunity that God has given us.”

Despite political fighting over immigration, recent polls suggest most Americans are welcoming Afghan refugees: An NPR/Ipsos poll says 69 percent of Americans support admitting Afghans who worked with the U.S. government, served in the Afghan special forces, or face persecution or repression from the Taliban. A separate Washington Post–ABC News poll found that 68 percent of Americans support accepting Afghan refugees after security screening. Support among Democrats is about 20 percent higher, but the majority of Republicans also expressed support. Compare that with a Pew survey less than three years ago in which about 51 percent of Americans said the country has a responsibility to accept refugees.

Nonprofits and refugee resettlement agencies are striking while the public opinion iron is hot to raise donations and find volunteers. World Relief received 15 times more first-time donations in one month than in the past year. At World Relief Sacramento—which has handled the arrival of more than 200 Afghan families in the past month—a volunteer coordinator woke up to hundreds of Amazon boxes from private donors piled like a fortress in front of her door. World Relief Sacramento alone received 200 volunteer applications in a week, when the entire organization typically receives about 25 volunteer inquiries a month.

People who have worked with refugees for years tell me they’ve not seen such ardent support for refugees from Americans before, especially since 9/11. But they worry the volatile news cycle and longer-term attitudes about refugees could stymie support.

CAMBRIA TORTORELLI, executive director of International Institute of Los Angeles (IILA), an LA-based refugee services nonprofit, said the kind of proactive engagement she saw from locals, churches, other religious groups, and businesses has been “unprecedented in terms of the numbers, intensity, and scope—certainly unprecedented within the last 20 years.”

People called, emailed, then called and emailed IILA again offering spare rooms, furniture, household items, transportation, and time. The local Afghan American community, many of them refugees themselves with friends and family stuck in Afghanistan, formed teams to pick up Afghan refugees arriving at the airport, shop for groceries, and take them sightseeing to Hollywood and the Southern California beaches.

“We’re doing what we should be doing,” Tortorelli said. “That’s very encouraging and restores my faith in humanity. I think the vast majority of people, in this country and around the world, have good hearts.”

But amid the gratification and gratitude is also an unease. Hard-line anti-immigration advocates, including former Trump adviser Stephen Miller, are trying to raise Republican opposition against the Biden administration’s refugee plans. And in September, someone left “Afghan refugee hunting permit” stickers around the University of Michigan campus. “We have to remember that there are some really dark and evil forces in our nation that want to do harm,” said Ali Noorani, president of the National Immigration Forum.

The same poll showing majority support for Afghan refugees also shows majority opposition to admitting refugees from other countries, such as Syria. That’s why current momentum for Afghans is pivotal, Noorani said. 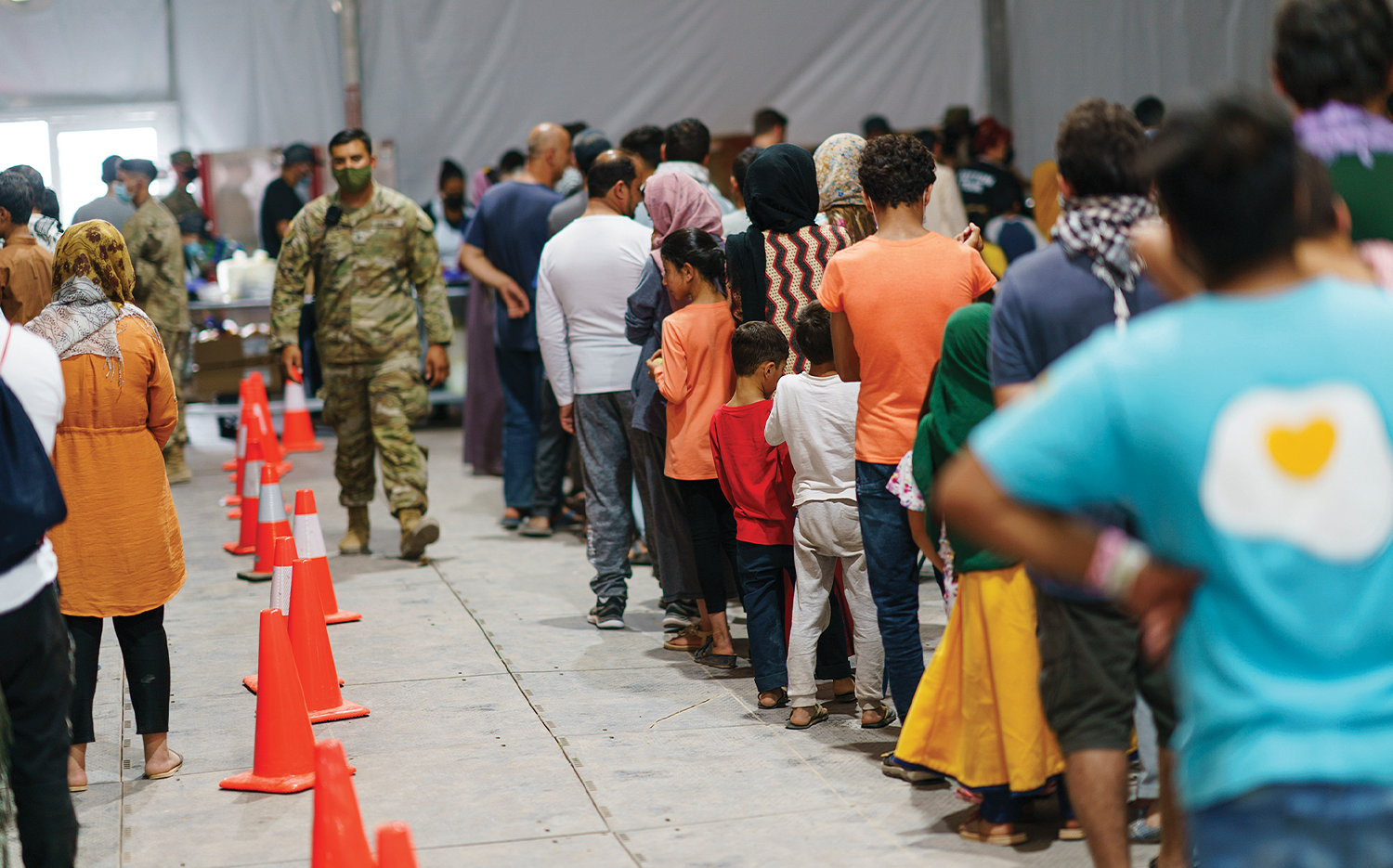 In 2015, the picture of a dead Syrian boy, face-down and limp-limbed on a beach in Turkey, wrung the hearts of Americans for the plight of Syrian refugees. Three months later, terrorist attacks in Paris hardened that sympathy. When the Obama administration, under international pressure, announced plans to resettle 10,000 Syrian refugees, about 30 governors—all Republicans but for one—refused, citing security concerns.

“It was such a whiplash,” recalled Matthew Soerens, director of church mobilization at World Relief. “That was only a couple months after that poor little child washed ashore in Turkey, when every American was jumping forward and saying, How can we help? Right now, it feels like a similar moment.”

Consistent public support is even more critical now, advocates say, as the Biden administration plans to resettle nine times more Afghan refugees than Syrian refugees under the Obama administration. After the biggest military evacuation in history, the administration anticipated the arrival of 65,000 Afghans in the United States by the end of September and expected another 30,000 in the next year.

MEANWHILE, THE IMMEDIATE and long-term needs of the Afghan families continue to grow. Many arrive in the United States with little more than a rucksack of personal items. Refugee resettlement agencies are overwhelmed, underfunded, and understaffed after the Trump administration downsized refugee caps to historic lows. But agency workers are scurrying to prepare to resettle as many people in the next three months as in the last three years combined.

Still, Wilton, the Care for Refugees director, is hopeful. Back in 2016, in the midst of a tumultuous election and rising concerns over Muslims and refugees, many Christians pushed back against popular anti-refugee sentiments. That year, Southern Baptists overwhelmingly passed a resolution encouraging churches and families to “welcome and adopt refugees into their churches and homes as a means to demonstrate to the nations that our God longs for every tribe, tongue, and nation to be welcomed at His throne” but to do so with strict and secure vetting measures.

Wilton said he has received messages from some people apprehensive about the government’s ability to properly vet refugees entering the country (see sidebar). So he was surprised to see how eager those who showed up at the workshop were to help new Afghans in their neighborhoods: “I had so much hope coming out of that meeting.” What he saw, Wilton said, was “so many people are saying, ‘Here I am, Lord. I’m raising my hand.’”

The next step for Afghan refugees

The 95,000 Afghans the Biden administration expects to enter the United States have a wad of red tape to untangle before they’re resettled on American soil.

First, a round of processing in countries including Germany and Qatar. The United States has sent about 400 FBI agents, officers, and others to those countries to run security checks, according to Homeland Security Secretary Alejandro Mayorkas. Former Homeland Security official Elizabeth Neumann said officials take biometric data including fingerprints and facial features to check against databases of terrorists, criminals, or possible security threats.

Next, evacuees arrive in the United States and run another round of security screening, Neumann said. Customs officials check fingerprints again and ask evacuees to hand over cellphones to look for suspicious contacts and data. If a fingerprint or phone raises concerns, counterterrorism officers dig deeper.

By Sept. 10, security checks had flagged 44 people as potential risks to national ­security, according to The Washington Post. Sixteen were still overseas, 13 were in U.S. Customs and Border Protection custody waiting for more screening, and 15 were either in custody with U.S. Immigration and Customs Enforcement, sent back overseas, or cleared after further review, the Post reported. Mayorkas has not confirmed how many Afghans have failed the vetting process but said the number is small.

After security clearance, Afghans’ next steps depend on their legal statuses. Those on Special Immigrant Visas (SIVs) will get help finding jobs and apartments. Others are on “humanitarian parole,” a rarely used status that comes without much help. Some parolees are midway through SIV applications, which they can now finish. For the rest, the Biden administration asked Congress to offer support services and a clear path to permanent residency. —Esther Eaton

WORLD has updated this story to correct the relationship between Send Relief and the North American Mission Board.