The collapse of Caracas

In the midst of Venezuela’s devastating inflation, a woman struggles to feed her children. Meridith Kohut/The New York Times/Redux

One of the more unusual souvenirs a visitor can buy in Colombian towns bordering Venezuela is a colorful bag made entirely of money.

On hot afternoons, Venezuelan street vendors dart through stalled traffic, dangling satchels tightly woven from the worthless currency of the country they fled. Pay roughly five U.S. dollars and pick out a moneybag that could have once financed a modest car.

The bags are even more unique now: In October, the Venezuelan government planned to scrap paper bills in the country’s circulation and print new money with fewer numbers. In a desperate attempt to curb a mind-boggling rate of hyperinflation, the government announced it would lop off six zeros from the currency. Before the revision, the largest bill in circulation was 1 million bolivars. That’s worth less than a dollar.

For most Venezuelans, the revision won’t make much difference. Many already use U.S. dollars to conduct business, and they don’t expect the Venezuelan currency suddenly to carry worth: In 2008, government officials cut three zeros off the currency. In 2018, they cut five more.

The superficial adjustments haven’t solved the structural failures at the root of the socialist nation’s collapse. Though the government opened the country to more imports after massive food shortages left grocery stores chronically empty, prices have soared: Many citizens struggle to afford the items now stocking the shelves. Outside urban areas, many still struggle to find enough food at all.

Medical care isn’t any easier. With COVID-19 cases packing public hospitals, patients scramble to available slots for care. Private hospitals and clinics have more resources, but private costs have doubled and tripled in some cases, putting available care far out of reach for many ordinary Venezuelans. Frequent power outages and unreliable water service also afflict the failed state that was once the wealthiest nation in Latin America.

An estimated 5.4 million citizens have fled Venezuela in recent years, with most settling in surrounding countries, but U.S border officials also report a steep uptick in migration: Agents have arrested at least 37,000 Venezuelans at the U.S. border this year—that’s up from 2,200 in 2019, and 68 in 2018.

In a vivid display of Guaidó’s ongoing struggle to exert authority, the interim president scaled a spiked fence outside the capital’s National Assembly last year to participate in government business. A group of helmet-clad national guardsmen raised shields and tried to push him back. The ongoing chaos left many wondering: Is there any hope of pushing back Venezuela’s darkness?

There are no easy answers to that question—or for the political turmoil driving Latin America’s worst humanitarian crisis. But pastors and other evangelicals rooted in Venezuela say they haven’t lost hope for a country they love. “We are living in a very sad time,” says Caracas-based pastor Samuel Olson. “But we know the Lord is hearing every prayer.” 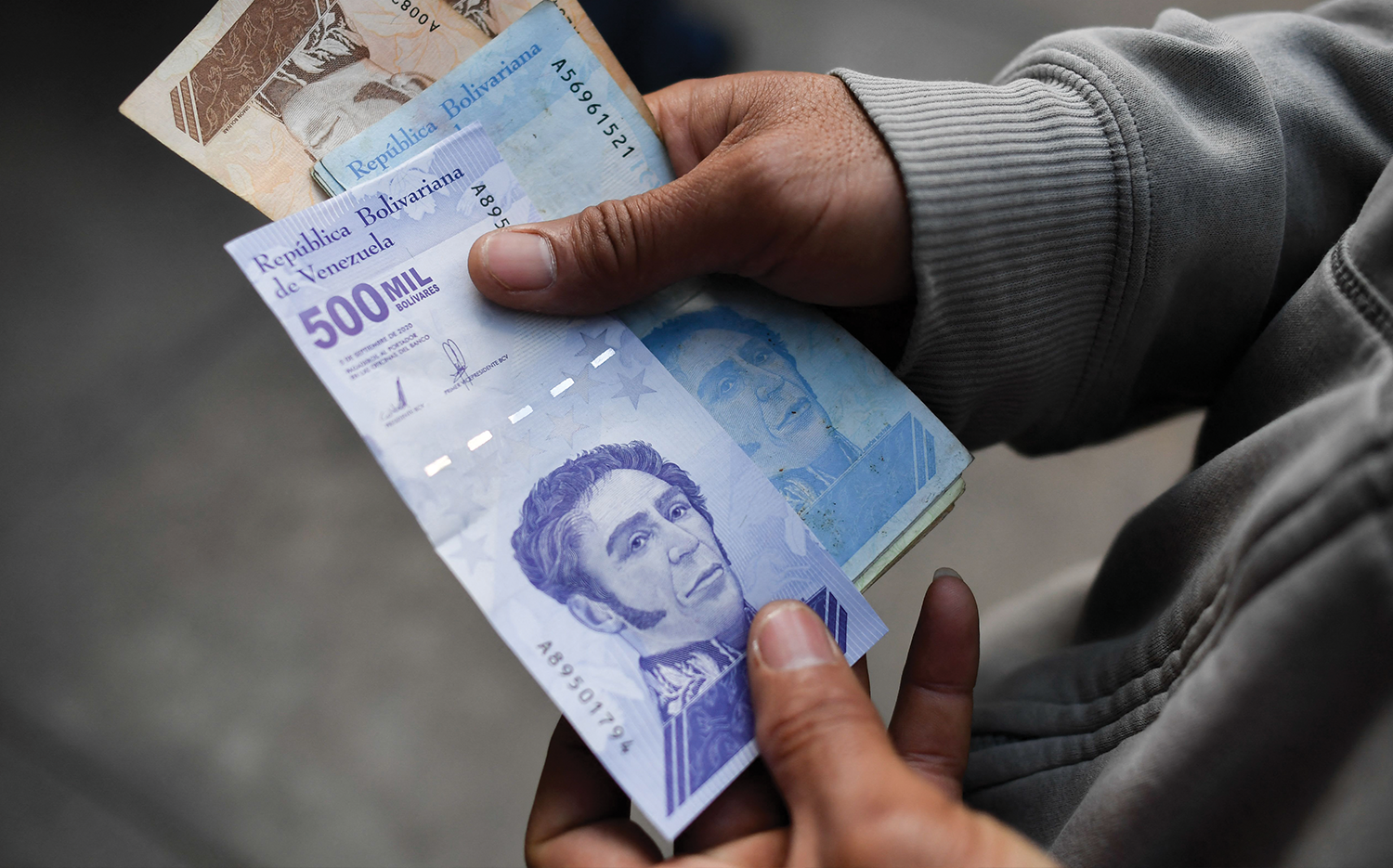 Not long ago, many Venezuelans considered Juan Guaidó an answer to prayer.

Decades of socialist rule had left the country staggering under food shortages and an inflation rate that had hit an estimated 1 million percent. Millions of citizens were fleeing the disaster, but Maduro denied his country was starving and refused outside aid.

In January 2019, thousands of cheering citizens packed a public square in Caracas, raising their right hands in solidarity while Guaidó swore the oath of office as the nation’s interim president and declared Maduro’s power illegitimate.

The extraordinary moment came after Guaidó invoked a clause in Venezuela’s constitution: If a president claims victory in a fraudulent election, the head of the National Assembly may become interim president until free elections are held.

Guaidó, as the leader of the National Assembly, and other opposition leaders declared what international election observers affirmed: Maduro’s reelection the month before was fraudulent.

The U.S.-backed Guaidó and then–Vice President Mike Pence assured Venezuela citizens amassing in the streets, “We are with you.” Most countries in Latin America also supported Guaidó, and a slate of European leaders said they would affirm his presidency if Maduro didn’t call for elections by Feb. 3.

Instead, he called Guaidó’s actions a coup attempt and hunkered down in the presidential palace with most of the armed forces backing him, out of either loyalty or fear: Madu­ro’s Cuban advisers run intelligence operations to smoke out traitors in the ranks.

A month later, as Guaidó attempted to facilitate tons of humanitarian aid into the country, Maduro closed border crossings, ordered security forces to repel relief efforts, and danced the salsa with his wife on a Caracas stage, declaring, “I am stronger than ever.”

U.S. sanctions hit the Maduro regime hard, but the dictator maintained the support of Russia, Cuba, India, and Turkey. By the end of last year, Maduro controlled most of the the government, despite Guaidó still maintaining his seat as speaker and his claim to the interim presidency. 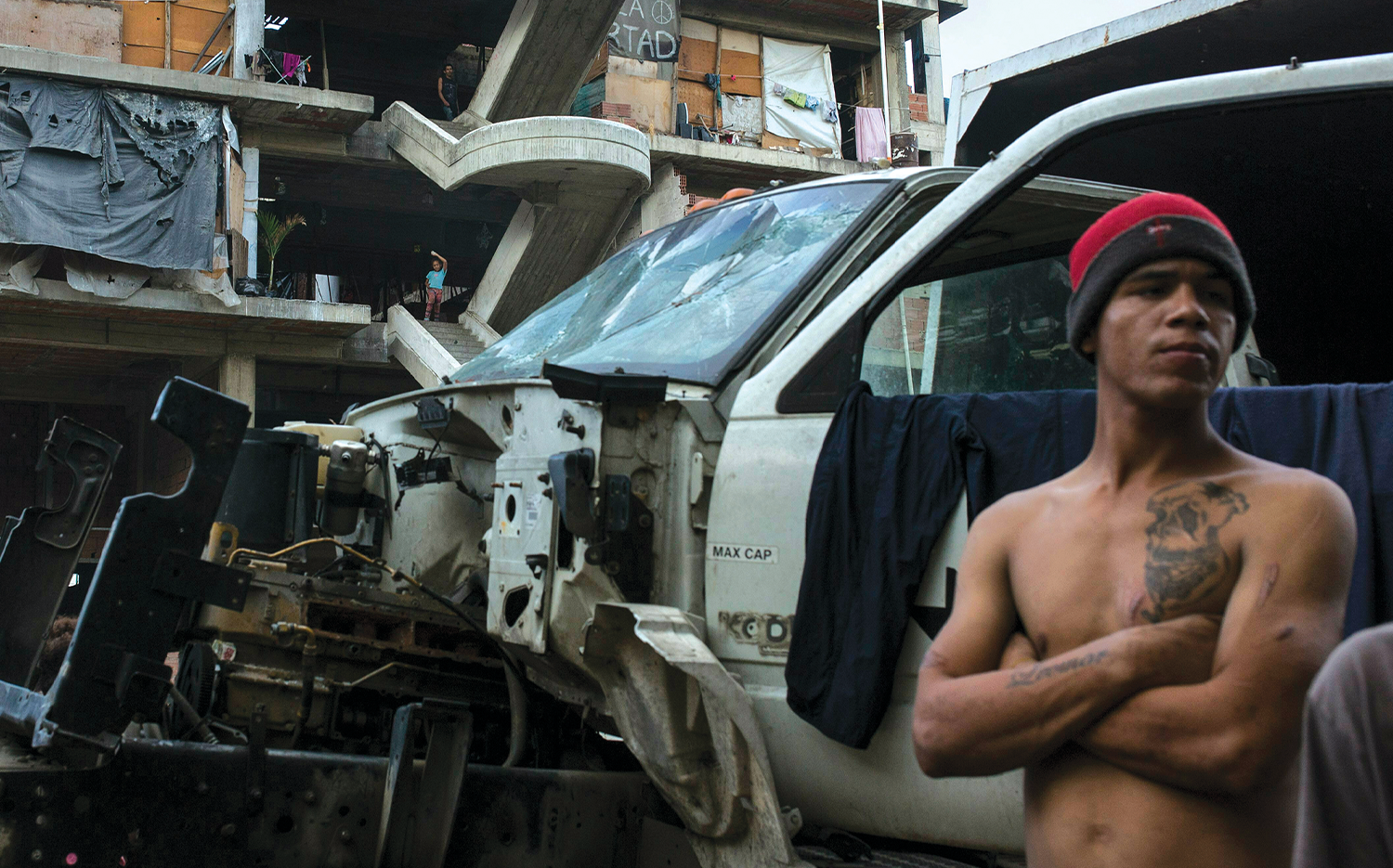 “WE ARE LIVING IN A VERY SAD TIME”: People gather outside a building occupied by squatting families in Caracas. Rodrigo Abd/AP

On the streets of Venezuela, many citizens are more concerned about daily survival than political intrigue. The COVID-19 pandemic has worsened economic woes, decimating the job market and deepening poverty for many already at the bottom of the economic ladder.

In an interview with WORLD, a Caracas-based analyst with a background working in civil society said Venezuelans are still staging small-scale protests, but they’re mostly decrying the deteriorating conditions, not rallying for any particular candidate.

A pastor of a small church in Caracas—who also asked not to be named for security reasons—said many Venezuelans have given up hope of any political solution, even if Guaidó is legally the president: “People are realizing legality doesn’t matter—this is about power and force, not right and wrong.”

Eric Farnsworth, an expert on Latin America and vice president of the D.C.-based group Council of Americas, says the central government has used its power to take away budgets from local governors and mayors and to essentially establish parallel governments: “So any benefits are seen to come from the [Maduro] regime, and they get credit for it.”

The regime has also used its power to crack down on dissent: The U.S State Department’s most recent report on human rights in Venezuela notes the regime “essentially criminalized freedom of speech by declaring reporting unfavorable to its policies as libel and slander, incitement to violence, or terrorism.”

The report said the regime controls communications by routinely blocking signals and harassing or shutting down privately owned television, radio, and other media: “The law makes conviction of insulting the president punishable by up to six to 30 months in prison, without bail.” Other human rights abuses included “unlawful or arbitrary killings, including extrajudicial killings by security forces of the illegitimate Maduro regime.” 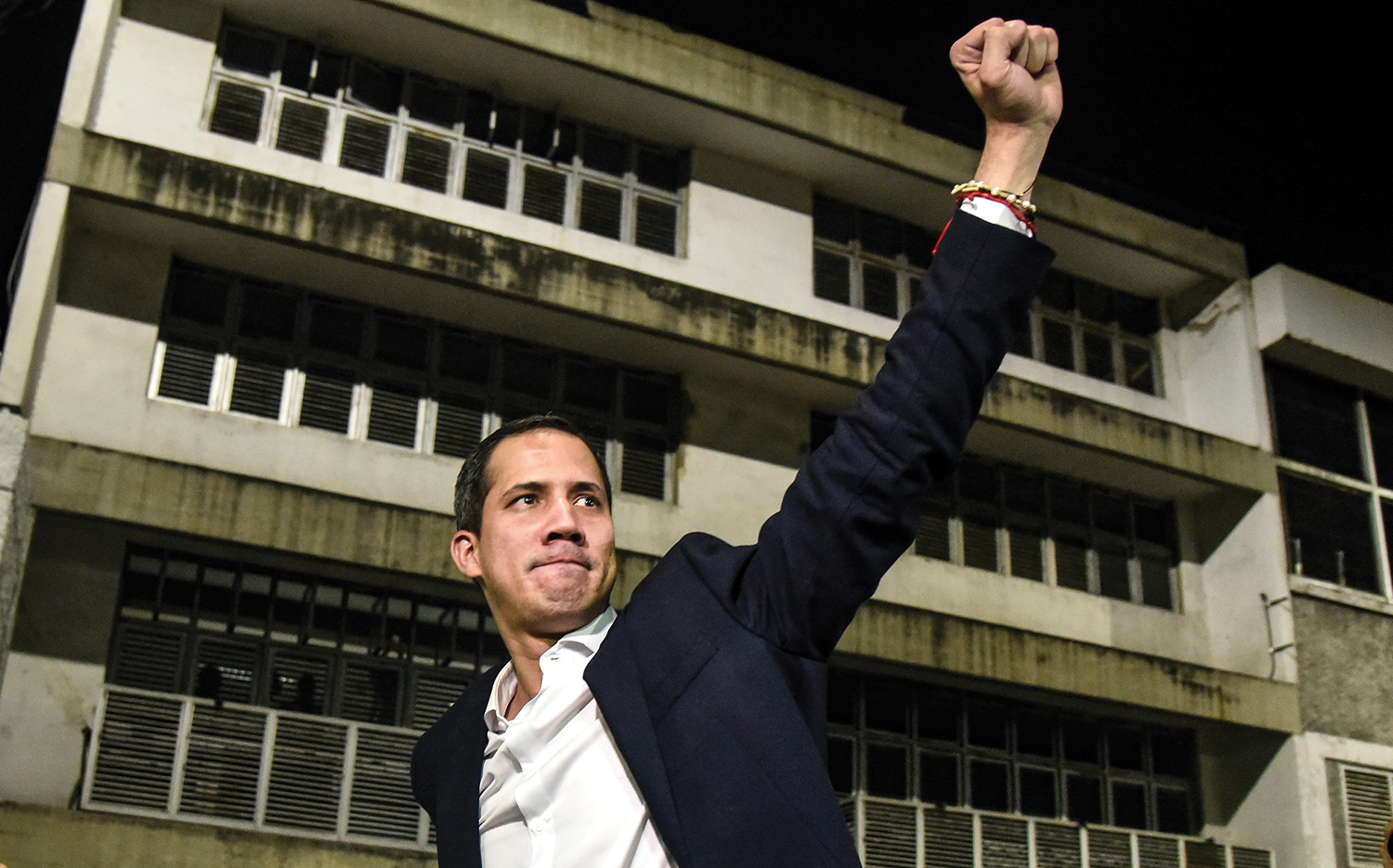 “THIS IS ABOUT POWER AND FORCE”: Juan Guaidó addresses a crowd after a speech in Bolívar Square. Carolina Cabral/Getty Images

THIS WASN’T HOW VENEZUELANS envisioned their future when Maduro’s predecessor, Hugo Chávez, won election to office in 1998. Corruption and economic troubles ran high, and Chávez wooed citizens with his promises to bring relief and make the system more equitable.

With oil prices booming, Chávez undertook vast social welfare programs, and paid for them with the country’s oil profits. Eventually, he also abolished the upper house of parliament, eliminated term limits for the presidency, packed courts with cronies, and censored critical media. In 2001, he began seizing property: “The land is not private, but the property of the nation.”

By the time Chávez died of cancer in 2013, his handpicked successor won by less than 1 percent of the vote. But Maduro vowed to continue chavismo—Chávez’s crumbling system of dictator-based socialism. When oil prices tanked a year later, the system imploded.

Still, Maduro benefited from the ruling party’s devotion to the late Chávez, even as the fervor sometimes crossed into idolatry. Less than a year after Chávez died, a member of the United Socialist Party of Venezuela blasphemously edited the Lord’s Prayer in front of hundreds of delegates at the party’s national gathering:

“Our Chávez who art in heaven, on Earth, in the sea, and in us delegates, hallowed be thy name. Thy legacy come so that we can take it to people here and elsewhere. … Lead us not into the temptation of capitalism, but deliver us from oligarchy.”

Maduro hasn’t attracted the same level of cultish devotion, but he does try to woo religious voters, including evangelicals. Nearly a year after Guaidó’s oath of office, Maduro announced the government would create the Evangelical Theological University of Venezuela, and he decreed a national Pastor’s Day in January.

The U.S. State Department’s report on international religious freedom noted the school hadn’t opened by the end of 2020. And while some evangelicals do support Maduro, the report noted members of the Catholic and evangelical communities rejected Maduro’s proposed school, calling it an attempt to “buy their conscience.” 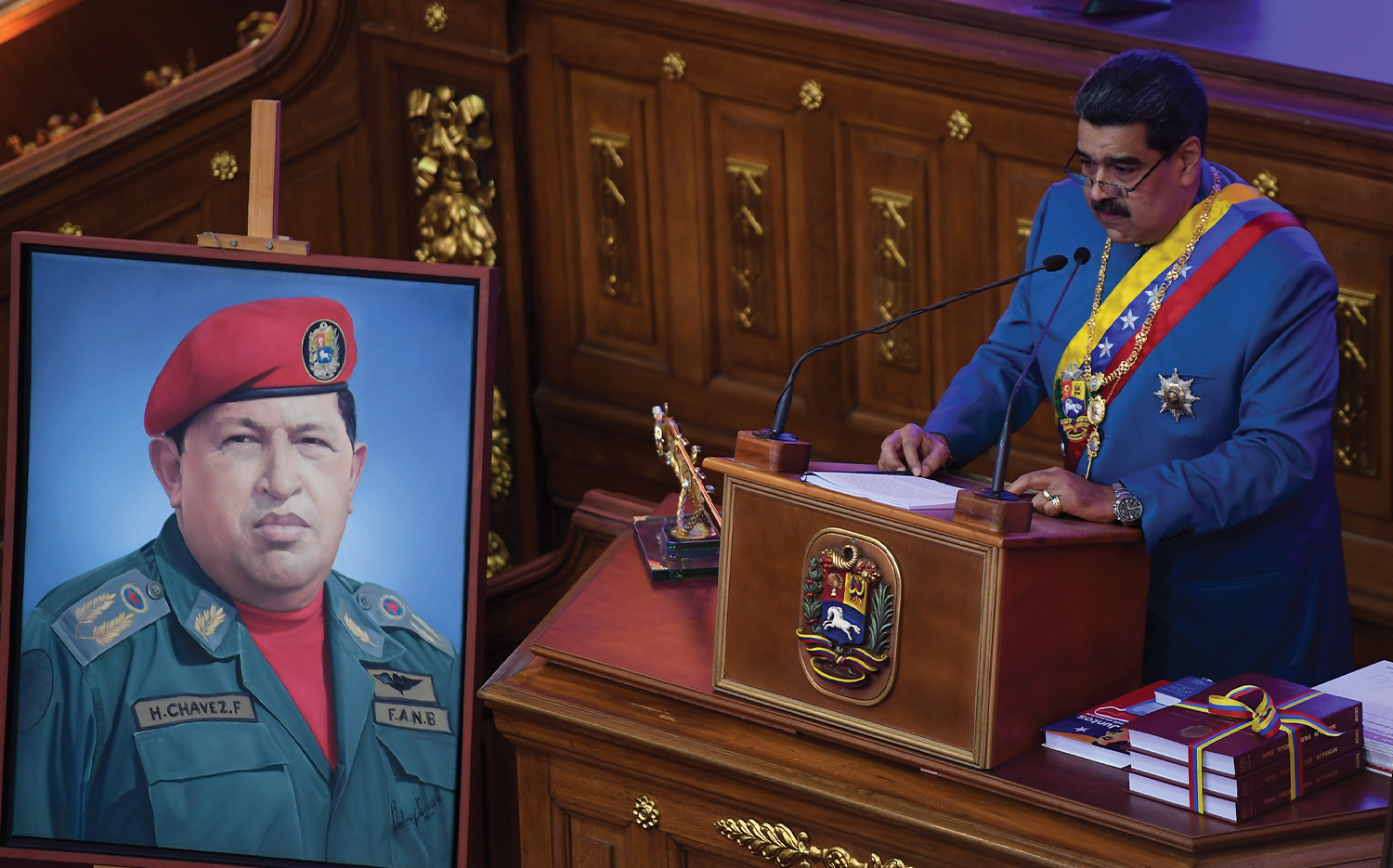 “THIS IS ABOUT POWER AND FORCE”: Nicolás Maduro delivers his annual address to the nation last January near a portrait of Hugo Chávez. Matias Delacroix/AP

FOR NOW, MANY VENEZUELANS are thinking about how to buy food and medical care for their families. The pastor of the small Caracas-based church says some members of his congregation have managed to maintain home-based jobs, but those who struggled before the pandemic find their woes deepening.

That also deepens the complexities for a congregation that has lost about half its young adults to migration: It’s difficult for an aging church leadership without a clear path to train a younger generation to succeed them.

Still, the pastor is encouraged by new ministry opportunities and by his congregation’s day-by-day, hour-by-hour trust in the Lord to provide for their needs. “The Holy Spirit is still working in people’s lives,” he said. “He’s not in quarantine.”

That’s true in larger churches too. Samuel Olson is pastor of Las Acacias Evangelical Pentecostal Church—the largest evangelical church in Caracas. The church has lost many of its members to migration as well, but still seeks to serve the surrounding community. Olson says hundreds of impoverished Venezuelans show up at the church each week, seeking food or help with basic medicines. He says the Evangelical Council of Venezuela—a group he led for 22 years—is providing similar help through local churches across the country.

Olson often hears from pastors in rural areas, where shortages are more severe and conditions are even more dire. On a recent afternoon, he read a sorrowful email from a pastor based in the southeast, who described seeing coffins break apart at funerals because grieving families couldn’t afford sturdier boxes. “May the Lord be merciful to us and give us his covering,” the pastor wrote to Olson. “The crisis becomes more acute. The pains are of childbirth.”

Olson’s voice sounds pained as he reads his friend’s note, but he says he hasn’t lost hope: “As Christians, we live with hope, knowing that the God that we serve in some way or another, perhaps unbeknown to us, is working.” Olson doesn’t venture predictions on how things might work out for Venezuela in the shorter or longer term, but he does offer what he says the nation needs most from other Christians.

“Pray for us. Intercede. Struggle for us,” he says. “Pray that the Lord will bring surprises.”