“The Church is a place for healing”

Christian leaders throughout the U.S. are speaking up in the pulpit, in prayer, and at protests after George Floyd’s death and widespread violence

Peaceful protests have filled Los Angeles streets in recent days. But the city has seen riots and looting too. So a scene there Tuesday was notable: Los Angeles Mayor Eric Garcetti and Los Angeles Police Department officers knelt with what one organizer estimated was 300-400 faith leaders from the area during a march: “Everyone from pastors in jeans and Black Lives Matter shirts to priest collars and religious garb” turned out for the event, the Rev. K.W. Tulloss told me.

Tulloss is the president of the Baptist Ministers Conference of Los Angeles and helped organize the march: Several Southern California churches and faith-based groups participated to honor George Floyd. Tulloss said it’s critical that the church’s voice is the loudest among a cacophony of outrage right now, since “the appalling silence of the church is sometimes why the community boils over.”

At the march, a 14-year-old boy thanked Tulloss for “showing us how to do it right.”

Across the United States, Christian leaders responded to ongoing unrest, in some cases changing sermon topics at the eleventh hour to address racial tensions, organizing prayer vigils, and even marching with protesters. Churches in Minneapolis, where Floyd died in police custody, gathered for a similar vigil on Saturday. But it’s not just there.

In front of police headquarters in Dallas, Bryan Carter of Concord Church, a predominantly black church in the southern part of the city, led a multiracial group of clergy and worshippers in praying for peace and unity. A black man next to the stage held a sign: “We are one race, we are one people!” Participants sweated through masks and uttered “amens” as Carter emphasized the unique role of the Church in pursuit of unity.

“What good is it to go to church all day and to sing songs about God and to hold hands in worship, and yet we are not concerned about the injustice that faces the everyday life of people of color?” Carter asked as the crowd of over 200 cheered. “We’re here because we want to help. We believe that the Church is a place for healing.”

Neil Tomba, senior pastor of Northwest Bible Church in Dallas, also took the stage at the prayer service. Tomba pastors a largely white church that sits at the border of two of Dallas’ most affluent neighborhoods, University Park and Preston Hollow. But the church has longstanding ties to historically black organizations and churches in the city. Tomba said he, like many other pastors, had “hit a wall” during the coronavirus pandemic and was weary after 13 weeks of livestreaming sermons to his congregation instead of meeting in person. He had lined up a guest speaker for Sunday morning but changed course in light of Dallas’ violent protests Friday and Saturday night.

“People wonder, ‘What does our pastor think?’ And I hope what they hear first and foremost is that we need to hear what Jesus thinks” and turn to the Bible, Tomba said. He and his wife, Vela, spoke on Sunday with Northwest’s high school minister, Marvin Walker, and his wife. The Walkers are black, and the Tombas are white.

“I’m not just affected by what’s happening because I’m a black man. I’ve been in situations that, by God’s grace, what’s been happening to Ahmaud Arbery, George Floyd, didn’t happen to me,” Walker said. He invited the congregation to model Romans 12:15 and “mourn with those who mourn.” 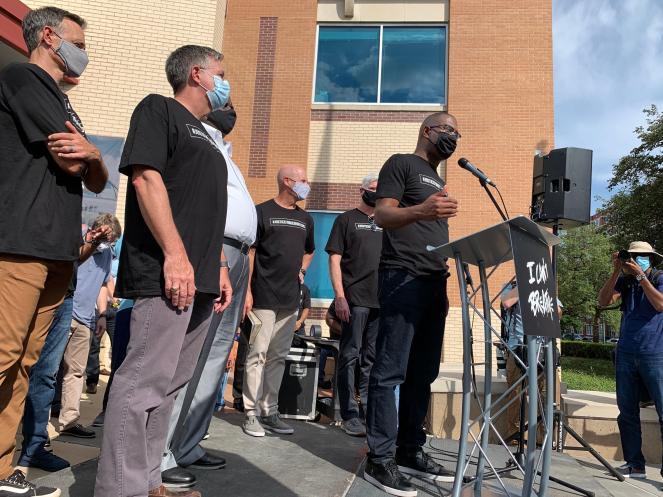 Pastor Bryan Carter stands among other Dallas clergy in front of police headquarters to speak to attendees of a prayer gathering. Photo by Katie Gaultney

On the other side of the country, Dr. Richard Smith pastors The Movement Church in Baltimore. The mostly black church is small, with about 100 members, which allows it to respond nimbly to crises in the community. Smith, who is black, and many of his congregants have been marching with protesters in Baltimore: They want to identify spiritual needs among demonstrators. He told me that most of the pastoral conversations he’s having at the protests are with white demonstrators eager to listen. He encourages them and thanks them for taking the “huge step of coming out of their comfort zone when for years maybe they’ve felt like they don’t really have to.”

Churches and faith-based groups are also making some efforts to harness technology to safely minister to believers as the coronavirus remains a threat.

In New Orleans, faith-based nonprofit Mission Reconcile aims to connect and integrate “one-race churches,” primarily black and white. The group is hosting online events, through Zoom, to help virtual attendees understand implicit biases and how to “love our neighbors.” The Revolution Church in Muncie, Ind., will have weekly discussions of Jemar Tisby’s The Color of Compromise, a book about the American church’s role in creating and resolving racial divides.

Jackie Hill Perry and Beth Moore both used Twitter to promote Sunday’s message by Pastor Charlie Dates of Chicago’s Progressive Baptist Church. He titled his sermon “I Can’t Breathe,” referencing Floyd, and covered Genesis 2:7 and John 20:21-22. “We who are of the human race are breathing the breath of God’s life,” Dates preached.

He was among about 50 faith leaders who participated in a “peaceful demonstration of solidarity,” marching through the historically black Bronzeville neighborhood in Chicago’s South Side district Tuesday evening. Church members of different ethnic backgrounds marched as day turned to dusk, chanting, “What do we want? Justice! When do we want it? Now!”

In New York City on Tuesday night, churches from around the city gathered for a prayerful protest, using the hashtag “#PrayMarchAct” as a virtual rallying cry. Demonstrators concluded the event in front of Barclays Center, home of the NBA’s Brooklyn Nets, and lifted their hands in corporate prayer. The peaceful march ended before the citywide 8 p.m. curfew.

Atlanta has seen days of protests, with riots sometimes following. Be the Bridge, a Christian racial literacy organization based in Atlanta, has used social media extensively to promote resource guides and other content to facilitate conversations and understanding about racial wounds among believers. Speaking at a press conference in Atlanta Monday, Be the Bridge founder Latasha Morrison urged white Christians to listen to black voices.

“As white people, what you have to do in this … take a step back and let black people lead. Let us use our voice in this season,” Morrison said to the multiracial crowd.

That’s a sentiment Allen Holmes, who pastors Daystar Church in the most racially diverse part of Greensboro, N.C., has tried to promote through his church. Minorities make up about 40 percent of his congregation. Holmes, with a deep Carolina drawl, recalled a black, male friend telling him of his personal experience: “Every time I’m in public, I have to smile a lot, and laugh a lot, and kind of look like the jolly black guy, because if I don’t, everyone’s going to be scared of me.”

Holmes moderated a community discussion on race Tuesday night from the stage of his church, with black and white church members as panelists. He said honest discussion about race within churches is often more challenging than a prayer service, joking, “Sometimes I think people pray because they don’t really want to talk.”

But Holmes doesn’t discount the importance of prayer, calling it “essential.” Joey Tomassoni, lead pastor of Annapolis, Md.’s Downtown Hope Church, is trying to put that principle into practice. The church’s executive pastor, David Bempong, is a second-generation Ghanaian. They’ve made inroads into the racially diverse neighborhood that surrounds the church by providing meals and pop-up pantries.

“Most of the time the white evangelical church is pretty silent on these things, but maybe this is a moment where we can make a statement on why we want to reject that precedent moving forward,” Tomassoni said. 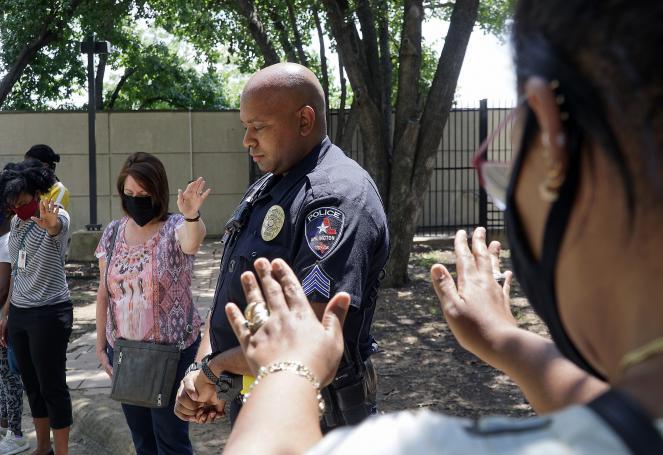 Arlington Police Sgt. Jeremy Lee was among several officers at a prayer for peace at police headquarters in Arlington, Texas, on Tuesday. Lawrence Jenkins/The Dallas Morning News via AP

Though Floyd died in Minneapolis, the national spotlight has largely settled on Washington, D.C., where wild demonstrations in front of the White House and national monuments have raged.

Three miles directly north of the White House sits Northwest Community Church, a nondenominational church of about 200 members. As I spoke to Northwest’s pastor, Dan Turner, helicopters whirred overhead monitoring nearby skirmishes between protesters and police or Secret Service. He’s close enough to hear “flash bangs and fireworks” nearby, too.

Northwest is diverse, counting among its ranks African immigrants, as well as white, Latino, and African American members. Gatherings there are still limited to groups of fewer than 10 people, so an in-person, corporate service to address America’s racial wounds is verboten. But Turner—a white man who adopted a black son—knew he couldn’t ignore current events.

“There’s a complicity in silence that I certainly don't want to be a part of,” Turner said. “And it’s infuriating to watch the city that we love being defaced and graffitied and windows broken … but let’s not lose sight of what's underneath all of that anger and rage and the issues that have been driving it.”

Prior to Washington’s riots, Turner had planned a message for Pentecost, which was Sunday—“kind of like our church’s Super Bowl Sunday,” he joked. In other years, his international congregants have worn traditional African clothing on Pentecost Sunday, and the entire body gathers for a potluck supper. Children perform a dance, and church members offer readings in different languages. Turner said most Pentecost celebrations with his flock reflect “what heaven's going to look like when the kingdom of God comes in its fullness.”

Instead, Turner said this Pentecost service—streamed to homes because of the pandemic—was a reminder amid pain and riots that “the kingdom of God is not fully here yet,” and to pray.