The campaign to recall Gavin Newsom

Millions of Californians across the political spectrum, fed up with pandemic restrictions, are ready to bid their governor goodbye

At the beginning of the coronavirus pandemic, Andrea Howe, like many other Californians at the time, was impressed with Gov. Gavin Newsom. It wasn’t just that he’s a good-looking man with perfectly coiffed hair who can give hourlong speeches without cue cards. At a time when others were freaking out, he seemed to take control. He seemed to have a plan. He was the first governor in the country to issue a mandatory stay-at-home order as COVID-19 cases surged. His regular live press conferences offered a calm, sensible presence to people in need of a leader.

At the time, Howe—a small-business owner and mother of three in Orange County—concurred. It made sense to her to close down schools, restaurants, and pubs temporarily and to restrict large gatherings. She was gratified when the governor signed emergency legislation to spend up to $1 billion to increase hospital bed capacity, purchase medical equipment, and build other protections. It felt comforting that Newsom seemed proactive in keeping his state safe—deploying the National Guard, leasing hospitals, promising to ramp up testing and contact tracing. “Thank you, you’re doing a good job,” she wrote in public comments to the governor.

But over the last several months, Howe’s support for Newsom has eroded. So has that of many Californians, revealing a wave of frustration and political disaffection in a state that leans Democrat. People are angry about the pandemic restrictions being either too strict or too loose. They’re upset about long-festering problems such as unaffordable housing and homelessness. They’re exasperated with the politicizing and hypocrisy they see in their leaders. They point much of their ire at Newsom. His approval rating, which hit a high of over 70 percent during the height of the pandemic, has dipped to about 46 percent.

Howe was disappointed enough to visit a “Recall Gov. Gavin Newsom” booth at a strip mall parking lot and sign a recall petition. She’s not alone. According to the latest count from proponents, that recall petition has garnered more than 2 million signatures. Recall efforts are common in California, but the effort to remove Newsom, while unlikely to succeed, has gained particular momentum over the past year as the governor’s policies stoked widespread dissatisfaction. On Tuesday, after months of avoiding questions about the recall movement, Newsom publicly addressed the possibility of a recall for the first time, acknowledging, “The reality is, looks like it’s going on the ballot.” 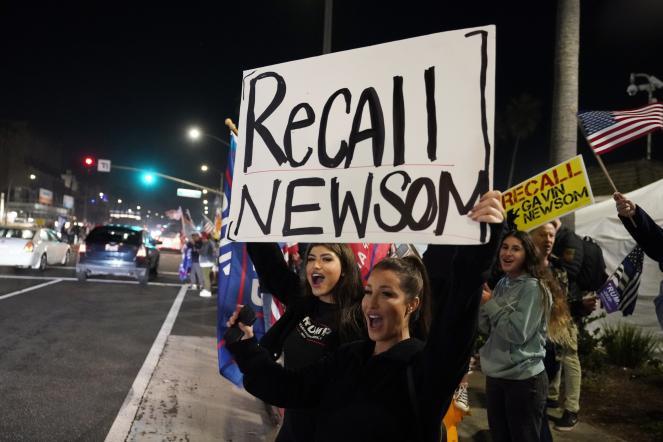 Demonstrators shout slogans while carrying a sign calling for a recall on Gov. Gavin Newsom during a protest against a stay-at-home order in Huntington Beach, Calif., on Nov. 21, 2020. AP Photo/Marcio Jose Sanchez

Among the many reasons people are unhappy with Newsom, most have to do with the pandemic. Howe, for example, is one of many parents who believe schools can and should reopen safely. Her three children attend elementary, middle, and high schools in one of the few school districts in California that have reopened part time for hybrid learning. Yet across the street, schools in the same county (but a different district) are still doing only distance learning. California recently loosened restrictions on outdoor and indoor youth sports, but it also increased restrictions for volleyball—a move Howe felt was arbitrary.

She began questioning whether officials have any sense of urgency to open things back up now that coronavirus cases have fallen to about 3,200 a day in the state, a sharp drop from a peak of more than 45,000 cases per day in December. “Some of the guidelines just don’t make sense now,” Howe said. “We’re still continuing to live like we’re in March 2020.”

Aaron Bergh, owner of a distillery and restaurant in Paso Robles, is upset because of how the pandemic restrictions have hurt his 5-year-old business. It had just begun to blossom when Newsom ordered indoor and outdoor dining to close last year. Bergh had to lay off four of his six employees. During the wildfires, when Bergh moved dining from outdoor to indoor (with masks and sanitizers), the state threatened to fine him and revoke his alcohol license.

“That rubbed me the wrong way,” Bergh told me: “I was just doing everything I could to keep my business open.” He blamed Newsom: “He’s the one man between me and me being able to run my business.” He now offers the recall petition to customers with their bill, and most of them sign it. Bergh said he tries to be apolitical in his business, but Newsom left him no choice: “Newsom has backed us into a corner and we have no exit, so we’re lashing out, and it’s come in the form of a recall.”

California is one of just 19 states in the United States that allow voters to oust their leaders before the end of their term. Only two governor recall efforts in the country’s history have succeeded: In 1921, North Dakotans removed Gov. Lynn J. Frazier from office, and in 2003, Californians recalled Gov. Gray Davis (and replaced the Democrat with Republican celebrity Arnold Schwarzenegger).

To kickstart a recall election, counties need to verify a number of signatures equal to 12 percent of the total voters in the last gubernatorial election. That means they need at least 1,495,709 valid voter signatures. So far, of the 800,000-plus signatures filed, counties have verified about 670,000. They must finish verifying signatures by April 29. (The deadline for campaigners to gather signatures is Wednesday.)

If the recall petition meets all the requirements, the state will hold another election this year, likely sometime between August and December. Voters then get to decide: Do they want to recall Newsom? If more than half vote “yes,” they also get to vote for the candidate they wish to replace Newsom. The special election will cost between $80 million and $100 million. 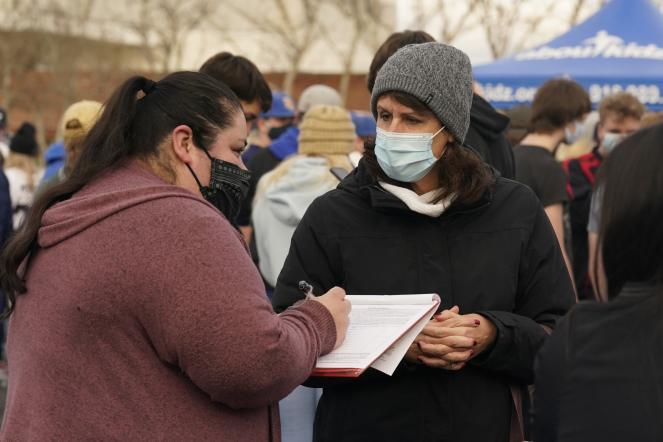 Many people who signed the recall petition know it’s a long shot. Newsom’s popularity is much higher than that of Davis (about 71 percent of voters disapproved of Davis, compared with 48 percent disapproval of Newsom), and the candidates currently gunning for his position are unlikely to arouse excitement from California voters. One contender is former San Diego Mayor Kevin Faulconer, a moderate Republican focused on reopening schools, helping small businesses, and alleviating homelessness. Another is John Cox, a Republican businessman who lost to Newsom in a landslide election and is promising lower housing costs and jobs. Neither enjoys the stardom or novelty of Schwarzenegger, and some Californians told me they didn’t sign the petition because they couldn’t fathom voting for either of these candidates. (On Tuesday, former Republican Congressman Doug Ose announced he would also enter the recall election.)

Conservatives have tried to recall Newsom from the moment he stepped into the gubernatorial seat. But one person, Orrin Heatlie, a retired sheriff’s deputy in Folsom, filed his papers at just the right time in February 2020, a month before the pandemic shutdowns. Heatlie’s recall petition doesn’t even mention the COVID-19 pandemic—he cites run-of-the-mill conservative grievances about immigration, high taxes, the death penalty, and homelessness.

But it wasn’t just luck, Heatlie told me: He studied the recall movement against Gray Davis and created a corporatelike structure to run an efficient campaign. He established an executive committee; built a multitiered system of state supervisors, regional managers, and other local administrators; and launched 75 volunteer groups throughout the state. When the pandemic restricted on-the-ground petition drives, he convinced a judge to extend the deadline to gather signatures by 120 days. He also spent hours on the road driving to almost every county to hand-deliver petitions. 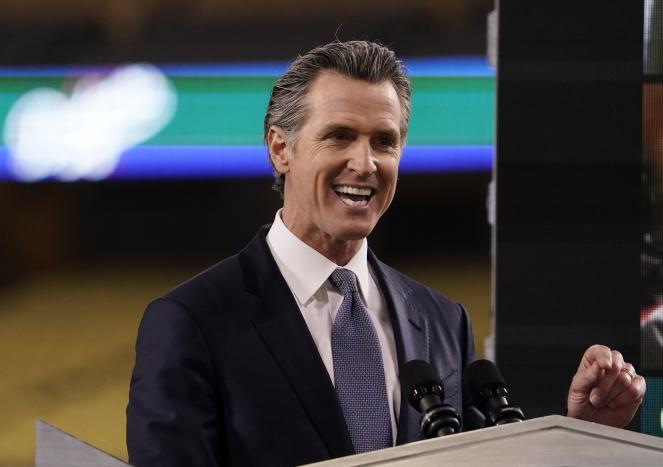 In November, the campaign hired Randy Economy, a Democrat-turned-Republican broadcaster and political consultant, as a senior adviser and spokesperson. With his media connections and savvy, Economy jumped on every media channel possible to sell the message: Are you tired and angry? Blame Newsom.

It took little convincing. By then, people across the political spectrum were mad at Newsom for breaking his own social distancing guidelines and dining with five other households at the French Laundry, a posh Napa Valley restaurant, on Nov. 6. Worse, Newsom told reporters that he was attending a friend’s birthday party outdoors, but leaked pictures showed him sitting close beside party attendees in a semi-enclosed space, and his dining companions included top lobbyists for the California Medical Association. (Newsom later publicly apologized and said he “made a big mistake.”)

The terrible optics—combined with Economy’s frequent media appearances—produced what Economy describes as “a 7.0 earthquake that shook the political system.” Newsom’s faux pas prompted recall signatures to increase “tenfold,” Economy said. “It’s the anger, it’s the draconian policies, it’s a combination of everything. Right now, people are telling us, they’re angry.”

That same month, reports of government waste also undermined confidence in the Newsom administration. State investigators reported that California’s Employment Development Department (EDD) had mistakenly lost about $400 million to fraudulent claims filed in the names of California prisoners. Officials more recently confirmed California has paid out more than $11.4 billion in unemployment benefits that involve fraud, even while the EDD still grapples with a backlog of hundreds of thousands of claims. The investigation is ongoing, and EDD said total fraud may reach $30 billion.

More signs of eroding trust: California’s vaccine rollout started out bumpy and is still throttled by logistical and social complications, from complaints about appointment system glitches to impassioned discussions over equitable distribution of vaccine doses. People on all sides are also upset at Newsom’s $2 billion plan to reopen schools: Unions say the governor has allowed them too little input, whereas parents say the governor kowtowed to union demands. 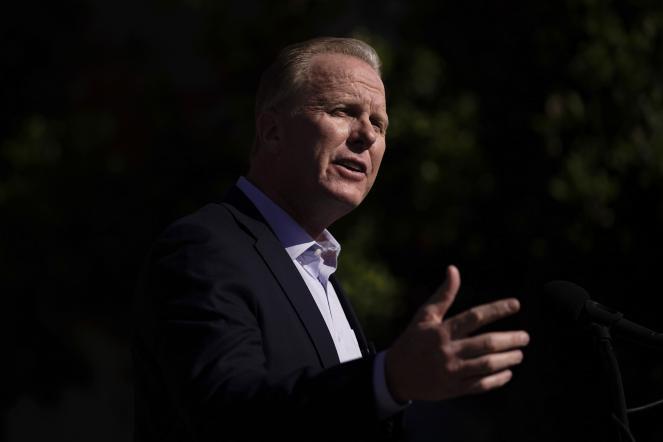 Whatever the chances of success, the recall momentum seems to have made Newsom and other Democratic leaders nervous. California Democratic Party chairman Rusty Hicks called the movement a “California coup” led by “right-wing conspiracy theorists, white nationalists, anti-vaxxers in groups who encourage violence on our democratic institutions.” Even U.S. Sen. Bernie Sanders, I-Vt., chimed in on Twitter: “Extremist Republicans have done enough to undermine democracy already.”

Such statements riled criticism from other Democrats, who rightly pointed out that a legal recall process is not a coup. Recall supporters are a motley group that includes some anti-vaxxers, Proud Boys, and promoters of QAnon conspiracy theories, but 31 percent of the people who signed the petition are Democrats and non-Republicans, according to petition proponents.

“This is a movement that has galvanized California and has brought people together,” Heatlie said. “It’s about the people stepping up and taking action where the political party has failed us.”

As for Howe, she’s not optimistic that Newsom will be recalled, but she’s OK with that. “It was just one thing that made me feel like I’m doing something,” she said. “Hopefully, he’ll listen and say, ‘You know, 2 million people in my state aren’t happy with my job performance,’ and maybe that’ll guide some of his policies.”