Turkish soldiers stand guard at the entrance of the Aliaga court and prison complex during the May trial of U.S. Pastor Andrew Brunson. BULENT KILIC/AFP/Getty Images

On Wednesday American pastor Andrew Brunson—unjustly detained in a Turkish prison for almost 20 months—will appear in court. Turkish judges refused to release him after his previous two hearings on April 16 and May 7.

The 62-page indictment against Brunson, a muddled collection of conspiracy theories spinning mundane details of the pastor’s life into terrorist acts, was unsealed only a month before the first hearing. In the indictment, the Turkish prosecutor relies on ludicrous accusations from three secret witnesses and a convicted murderer to allege that the pastor carried out felonies on behalf of two terrorist organizations as well as military espionage. 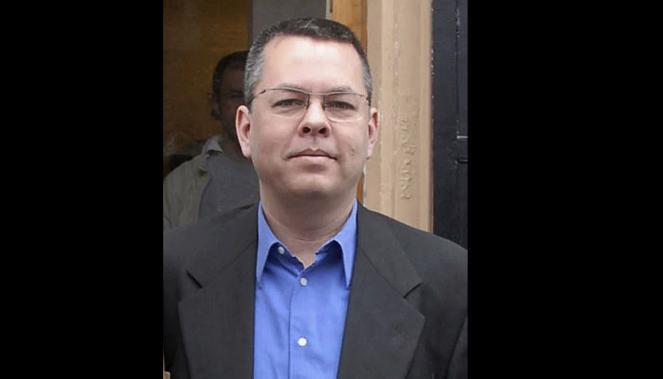 Here are 12 outrageous accusations the Turkish court leveled against Brunson in the most absurd court case in the country’s history.

1. Brunson’s daughter sent him a video of maqluba, a traditional Arab dish of rice, meat, and vegetables cooked in a pot, which is then flipped upside down. The prosecutor argues that this is the signature dish of a terrorist organization in Turkey, consumed frequently in their safe houses, and is proof of Brunson’s link to a terrorist cell.

2. Brunson received a text message from one of his church members informing the pastor that he could not make it to worship due to diarrhea. The prosecutor fails to explain how this implicates Brunson.

3. Brunson appears in a photo with a man with a yellow, red, and green scarf. The prosecutor interprets the presence of the Kurdish national tricolor in the photo as proof of the pastor’s link to the Kurdistan Workers’ Party (PKK), a designated terrorist group in Turkey. He argues it “could be evaluated as involvement in illegal activity under the guise of missionary work.”

4. A secret witness reports seeing Brunson at a “brain washing activity” held in a hotel where “there were 25 Turkish college students making vows alongside the American national anthem, with their right hands on the left side of their chests.” The prosecutor presents this as an “activity against the security of our country.”

5. A secret witness accuses Brunson of publishing Bibles in the Kurdish language. The prosecutor fails to explain why this is illegal.

6. The prosecutor argues that Brunson’s “insistence to be present” in the historical Sur district of the city of Diyarbakir in Turkey’s southeast “despite the chaos in the region” leads him to infer that “the suspect fulfills duties in accordance with the goals and strategy of the illegal organization to which he is linked.” 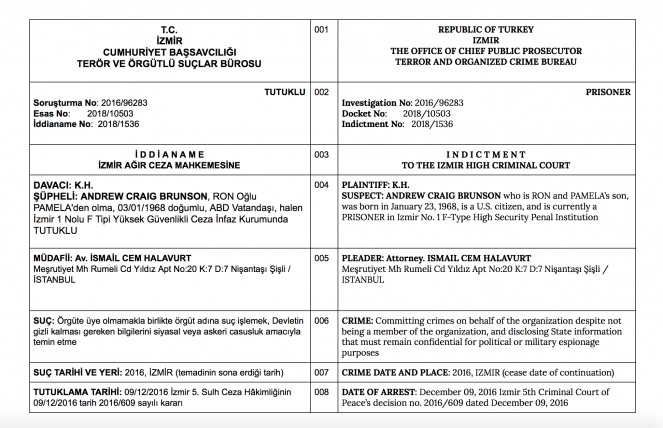 A translated page from the Brunson indictment.

7. A secret witness claims that Brunson was “part of an operation in which [Kurdish] families wrote letters to the Canadian government to seek asylum there, leveling harsh critiques against the AKP [Turkey’s ruling Islamist party] and the MHP [AKP’s ultra-nationalist partner].” The witness presents this as part of a scheme in which “PKK members would pretend to convert to Christianity and use the church to flee the country by seeking asylum abroad.”

8. A secret witness reports that Brunson met with a lawyer to discuss how to establish churches in Turkey, not a criminal offense even under Turkey’s draconian state-of-emergency measures, while also noting, “Opening churches became fashionable during that time.”

9. Brunson contacted Amnesty International’s Turkey director, who is also an attorney, nine times to inquire about his residency permit. Although it is not a crime to retain a lawyer in Turkey, this attorney was later imprisoned on terrorism charges, and hence any prior contact with him is now retrospectively a criminal act.

10. A witness, who admits to being convicted of murder and escaping from prison, claims that he heard from an “Israeli missionary” that Brunson had joined a meeting at an Istanbul convention center in March 2013, where attendees planned what would later become the Gezi Park protests, a nationwide demonstration over the government’s razing of trees in May 2013.

11. Brunson has allegedly been in contact with volunteers of the Church of Jesus Christ of Latter-day Saints. A secret witness argues that this is suspicious, since he also claims that “English teachers at Turkey’s military high schools have been members of the LDS church since the 1990s,” and that Mormons are “strongly influential in the U.S. Army, the CIA, and the NSA” and “make up 40 percent of U.S. military personnel serving in foreign countries.”

12. Brunson’s alleged contact with the LDS church is presented as criminal since a secret witness claims that the gang of Mormon English teachers mentioned above all have the same identifying feature: a missing finger, but each one has a different finger missing.

Ahead of Brunson’s Wednesday court appearance, rumors have swirled of a suspected deal between the Trump administration and Turkey’s President Recep Tayyip Erdogan. But Turkey’s formal indictment makes clear Brunson deserves to be free not because of a deal, but because there isn’t a shred of evidence against him.

Aykan Erdemir is a senior fellow at the Foundation for Defense of Democracies and a former member of the Turkish Parliament. Merve Tahiroglu is a research analyst focusing on Turkey at the foundation.