The art of overflow

Standing at a kitchen island laden with imported meats and cheeses, nuts, and berries, Stephanie Interbartolo, 48, carefully arranges prosciutto pillows on an emerging charcuterie board. She shreds lemon zest on a roll of goat cheese and accents it with a bright, edible flower. With sure hands she slices pears and golden kiwis, garnishing the tray with sprigs of thyme and rosemary until the wooden board disappears.

Interbartolo learned the art of cooking from her parents and grandparents in a family that traces their ancestry through food: “My blood type is marinara sauce.” Most of the family lives within 10 blocks of each other in Boston, but Interbartolo moved to Las Vegas shortly after graduating college. In 2019, she left an 18-year media career to move to Austin to help a friend through family and health crises. In search of a new occupation, she worked as a personal chef and started a charcuterie business based on the life lessons she learned from her family. 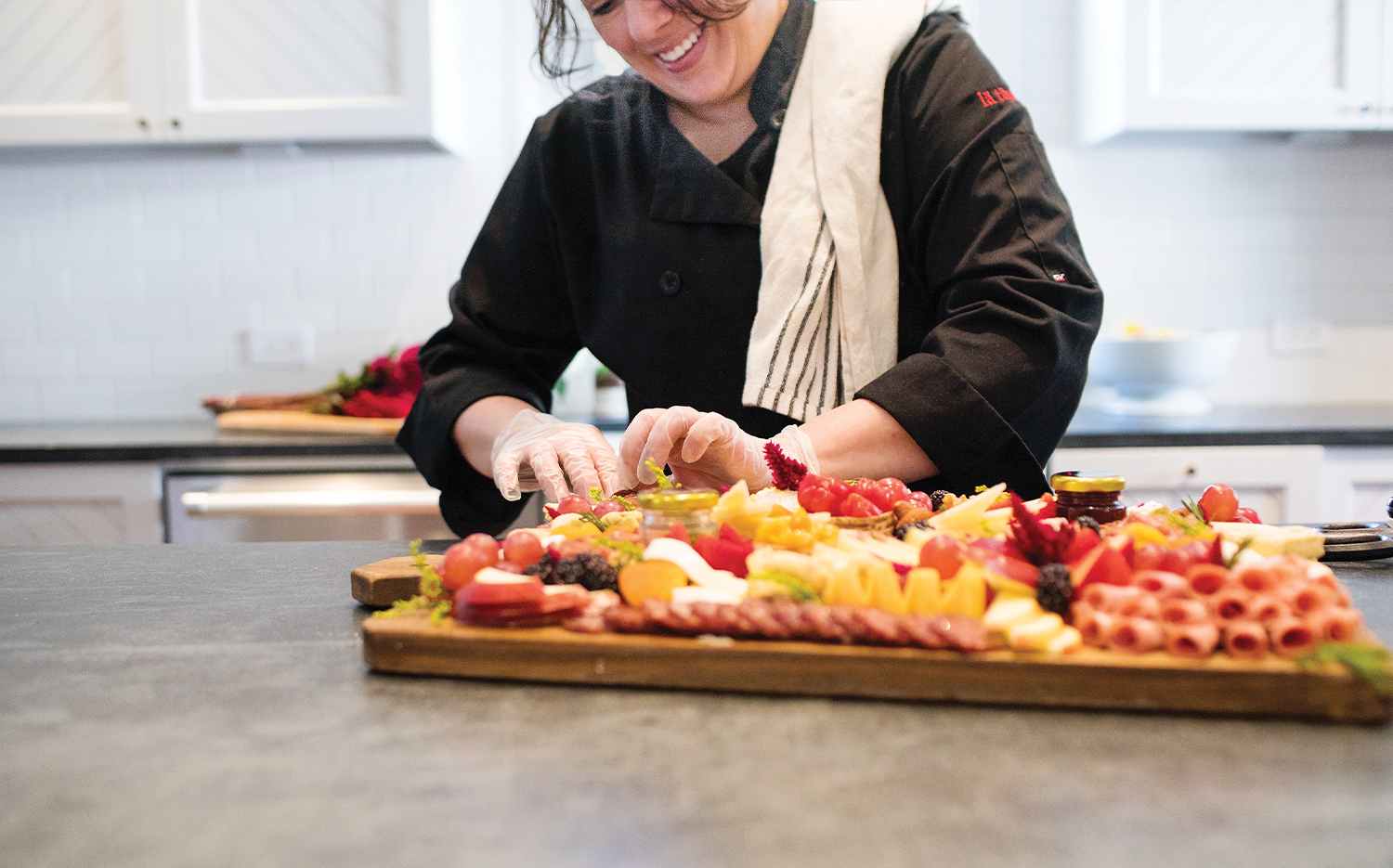 Rule 1: Everyone is welcome at the table. Interbartolo grew up in Boston’s North End, an Italian neighborhood where kids played stickball in the streets and everyone knew everyone else’s business. During summer weekends, residents closed the roads to celebrate Catholic feast days. Local families ran signature food stands for thousands of visitors.

Interbartolo hopes to create the same joyful atmosphere. She crafts her charcuterie (in Italian, antipasto), to be accessible as well as beautiful. Interbartolo trims grape clusters and folds sopressata so they are easy to grab: Nothing is too pretty to eat. She wants people to slow down, put their phones away, and converse over her food.

During the pandemic, bringing people together for a meal posed a health risk, so she had to halt her business development for months. Still, she filled a few orders on the side, making boards for smaller groups and packaging products individually.

Rule 2: No one leaves empty-handed. “Don’t disgrace the family.” As she crams another blackberry into a corner between a jar of honey and a stack of mortadella, Interbartolo repeats this mantra of her mother’s, who considered it a personal failure if guests left a meal without an aluminum foil swan stuffed with leftovers. This was not always an easy principle to live by: Interbartolo remembers her mother fussing at her father for trying to give food away at their catering company.

Interbartolo experiences these same tensions. Although she comes from a culture of overflow, she still has to balance the books, and $30 is a lot for a pound of Italian prosciutto. She doesn’t list prices on her website. Instead, customers fill out a form with their preferences so she can tailor boards that meet her standards and their budgets.

Rule 3: Respect your roots. In the Interbartolo household, cooking was a ritual. Family members brought the same beloved recipes to gatherings each year: Aunt Flo perfected her stuffed artichoke recipe, while Interbartolo’s mother claimed the best clams casino in town. She remembers spreading a sheet of ravioli across a bedspread—the only surface large enough—with her grandmother. After two years in Austin, Interbartolo still feels like an “Italian unicorn” in the land of Texas barbecue.

Carolina is a reporter for WORLD Digital. She is a World Journalism Institute and Wheaton College graduate. She resides in Harrisburg, Pa.

Help! What’s the name of her business in Austin? I want to order a board for Thanksgiving and cannot find her online!

My adult daughter came home last Thanksgiving with a charcuterie board. She had assembled it with a bunch of Italian and other Mediterranean treats, it was incredible!