Interest in chess has boomed during the pandemic as top players embrace streaming platforms. But can the chess world avoid the toxicity of the internet?

Norwegian chess player Magnus Carlsen makes a move in a game against Italian-American Fabiano Caruana at the World Chess Championship in London in 2018. AP Photo/Frank Augstein

Need some happy news during this hard year? The pandemic lockdown has spurred new love globally for chess. Millions have tuned in to online tournaments among the world’s best players in recent months after the pandemic postponed most in-person professional competitions.

Top players have turned to streaming platforms like Twitch, which saw a 400 percent increase in the hours people watched chess from March through August compared with last year, according to The New York Times. That amounted to 41.2 million hours of chess consumed on Twitch during the pandemic. Top Twitch gamers, who usually stream hours of themselves playing games like Fortnite, have begun streaming chess.

As professional chess players have adapted to the online format, chess has become more, well, fun. Consider Samay Raina’s YouTube stream that world chess champion Magnus Carlsen joined in September with some Indian YouTubers and former world chess champion Vishy Anand, whom Carlsen deposed from the chess throne in 2013. Raina, a comedian and chess player, started his YouTube channel in March and now has 489,000 subscribers.

On the stream Carlsen, Anand, and the others messed around playing some variations of chess, like one where they drew cards that determined which piece Carlsen had to move (if they drew a queen from the deck, he had to move his queen, and so on). Before ending the stream, Raina impulsively suggested he and Carlsen play a blitz game, but where Raina had three minutes to play and Carlsen had only 15 seconds total for the game.

Carlsen considered the insane challenge for a moment, but his competitive nature quickly won out and he accepted. Fifteen seconds turned out to be more than he needed: Carlsen won in seven seconds, prompting loud derision from the other players on the video.

“I’m so disappointed!” Vidit Gujrathi, a top Indian chess player, shouted at Raina, laughing. “Your one chance of defeating Magnus!”

“Fine, shame me, shame me! I just made a fool out of myself in front of 35,000 people!” said Raina. In the end the playful stream drew half a million views. 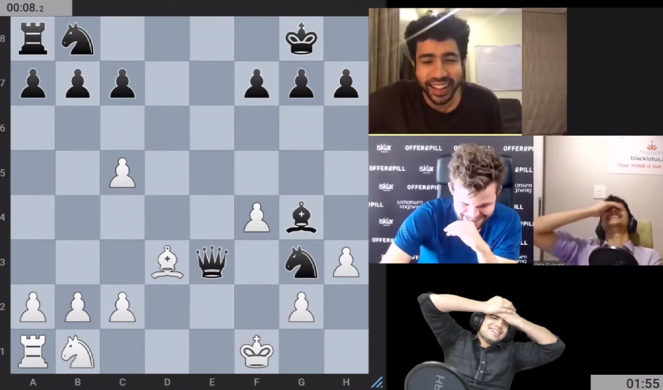 The “fun” part of these streams is important for drawing in young fans who could fall in love with a game that develops analytical thinking skills, concentration, and creativity. Part of the magic of the most popular internet streams is watching a genius on the level of Magnus Carlsen playing with and teaching amateurs who themselves already know how to entertain an internet audience.

The internet chess carnival will continue as the official chess organization, FIDE, announced in October it was postponing the in-person Candidates Tournament until next year while COVID-19 continues to surge around the world. The tournament, which determines the challenger to the world champion, started in Russia this March before organizers hurriedly called it off as Russia began shutting down international flights. Now that partially played tournament is delayed at least until spring.

When FIDE first called off the tournament in March, Carlsen created his own online chess tour built around rapid games instead of the usual hourslong classical games of traditional elite chess tournaments. It was a big hit, going so well he decided to do a sequel tour that will start this month. On top of winning all these tournaments during the pandemic, Carlsen is winning in the business of chess: His chess company that centers on online chess, Play Magnus Group, had a $42 million debut on the Oslo Stock Exchange in October.

The online format brought new drama. Chinese player Ding Liren, ranked third globally, had to find technical workarounds to participate in the tournaments because China blocks gaming sites like Chess24, which hosted the Magnus Tour. Ding struggled through regular disconnections and had to play in the wee hours because of time zone differences.

A new online rivalry developed through that tour between Carlsen and one of the top American players, Hikaru Nakamura. They’ve had exciting showdowns during the online tournaments, and Nakamura seemed to be one of the few who could rattle Carlsen. Nakamura is one of the biggest internet chess celebrities, with millions tuning in to his Twitch streams during the pandemic. In September Nakamura became one of the first chess players to sign with an e-sports agency.

He stoked chess interest by training other Twitch stars in chess and then hosting competitions. Like Raina’s channel, Nakamura’s is fun to watch because it mixes genius brains like his with regular people trying to learn chess. But Nakamura also thinks the quick games online make for better viewing.

“Because you have winners and losers, more people will follow it even if they can’t necessarily understand what exactly is going on,” Nakamura told the gaming news site Kotaku. (By contrast, most high-level classical chess games end in ties.)

Kotaku, the gaming site, worried moving chess online would open the game up to the internet’s “toxicity.” But from my hours of watching chess online, I would say that toxicity isn’t immediately evident.

From the professional commentary to the banter among players, chess seems to be one of the purer corners of the internet in many ways (if you don’t read the comments!). Some moments in online tournaments were almost a mockery of the toxicity of the internet: During one tournament, a blind musician, Oleg Akkuratov, sang and played jazz while the players were thinking between moves.

But one element of toxicity has come up as the game has moved online: cheating. In October, Chess.com issued a lifetime ban on Armenian grandmaster Tigran Petrosian after its “fair play team” determined he had cheated in an online tournament. His team, the Armenia Eagles, was disqualified after initially beating out the Americans, the Saint Louis Arch Bishops, for a $20,000 prize. Cheating in chess usually means using a computer chess engine to determine best moves.

And speaking of internet toxicity, after the cheating accusation first appeared from American player Wesley So, Petrosian published a long, insulting rant against So. Maybe the culture of streaming platforms will drag chess into this kind of drama, but the current top players are all very likable and not given to brashness.

For example: The top American player and No. 2 in the world, Fabiano Caruana, is soft-spoken and universally acknowledged as a nice guy. He has played in the major online tournaments but said at the first in-person tournament in Norway in October that he wanted to see “a balance between online and classical. Right now unfortunately we can only really play online chess.”

Whatever the drawbacks of internet culture and rapid chess, the pandemic has brought in a new generation of chess fans. Sometimes that fandom comes at the expense of homework.

In a comment beneath the 1½-hour YouTube video featuring Raina and Carlsen, Suryam Agarwal wrote, “I don’t know anything about chess, I have many assignments left to do, still I watched the whole video.”