Many older Christians wonder how to communicate their beliefs about God to children, grandchildren, and great-grandchildren. Charlotte resident Ernesta Wood, 88, has found a way.

Wood’s home displays photos of her 53 descendants, nearly all Christians. Once a week for the past 16 years, she has sent them letters—777 in all, as of July 1—filled with stories. Some are dramatic: Her blind grandmother miraculously saw Wood’s grandfather minutes before he died. Other stories cultivate a sense of God’s presence in less dramatic moments: Once, her parents’ pet birds escaped but returned to their cage before dark, just as her mother had prayed. Another letter told of how Wood stayed safe and her car remained intact as she was driving 65 mph down the highway without realizing she had a flat tire.

The letters testify about tragedies as well. Wood’s first husband, Clyde, was a pastor and a pilot in training. He died in a plane crash when he was 54. Wood remembers sending her children to school that morning and praying, “Lord, help us to accept whatever happens to us today as from your hands.” Then came a phone call: The plane was down, and one of the pilot’s legs had burned. She assumed the other pilot was hurt and drove to the hospital to pick up her husband. There she learned he was dead. Wood stayed calm and wrote about the comfort of knowing her early morning prayer had been answered amid the family tragedy.

After her husband’s death, Wood moved in with her parents, then traveled as a teacher with the Jesus Film Project. She lived in Russia for a year and wrote to her grandchildren that the exact amount of money needed for her to live overseas that year, $27,000, miraculously came the day it was due. She wrote about new converts, prayers answered, and joy. Wood also visited Mongolia, Cambodia, South Africa, Croatia, and other countries. She hated flying, especially after her husband’s death, but she embraced the adventures and chronicled stories of God’s worldwide work. 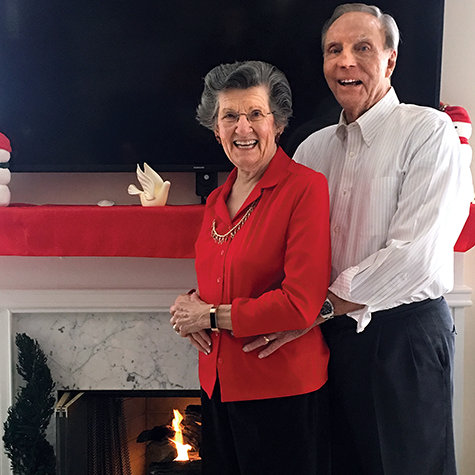 In 2007, Wood, then 76, married Cliff Wood, 80, five months after their first date. More than 700 guests attended their wedding, and two grandsons served as the officiating pastors. The Woods have known grief since their marriage. Cliff’s son, Barry, died three years ago from ALS. For Cliff’s 90th birthday, Barry could only move his eyes but had prerecorded a letter to his father. Two of Ernie’s grandsons, Geoffrey and Luke, became blind at young ages. Less than two years ago, Geoffrey committed suicide.

While giving a tour of the grandchildren’s photos hanging on the walls, Wood laughs at a photo of her and Cliff, two octogenarians, rolling by the White House on Segways. She remembers blowing past another elderly lady in a wheelchair who shouted, “You go, girl!” That could be Wood’s refrain, as each of her weekly letters quotes Psalm 118:17: “I will not die, but live, and tell of the works of the Lord.”