Two Japanese torpedoes sank the USS Indianapolis on July 30, 1945. Some 300 sailors died right away. Nearly 900 made it into the water alive, but only 316 survived until rescued four to five days later. U.S. Navy vet and former WORLD Features Editor Lynn Vincent is now a best-selling author, and July 10 is publication day for her new book, Indianapolis, co-authored with award-winning filmmaker Sara Vladic. Here’s an excerpt from the book that shows how faith in God helped some to survive—although other believers perished. Warning: The historically accurate account may disturb some readers. —Marvin Olasky

Cast adrift 280 miles from the nearest land, Marine Corporal Edgar Harrell’s swimmer group was in desperate shape. By the end of the second day, with their saturated life vests barely keeping them afloat, their numbers had dwindled from eighty to forty. Many of those who died joined the growing crowd of corpses that refused to float away. The living men’s tongues had begun to swell in their mouths, and the magnitude of their thirst became a torture conceived by demons. Overcome, some drank from the ocean. … Blood vessels tore and fluid built up in the brain, causing seizures and insanity. They vomited and foamed at the mouth. Some died of kidney failure. Others’ brains short-circuited violently, as when a tree branch hits a high voltage power line.

Harrell watched, horrified, as young men, full of life and laughter and pranks just a day and a half before, went out of their heads. Surrounded by water, his thirst unbearable, he clenched his teeth against the cool seduction and prayed. In his head, he recited Psalm 23. “The Lord is my shepherd. I shall not want. …”

Harrell felt strength leaving his limbs, but his buddy Spooner was worse. The other Marine’s eyes were now so inflamed that they literally bulged from their sockets, making it impossible for him to close them. The constant slap of waves splashed salt on the raw surfaces of his eyeballs. The light of the sun sparked excruciating pain. 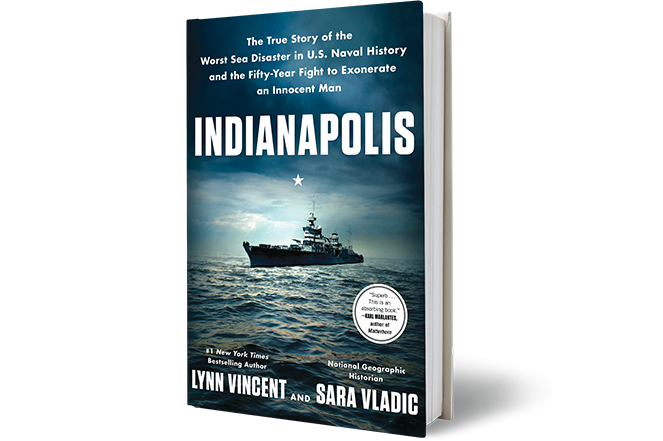 The day spun out cruelly, the men suspended in the troughs between waves with no soothing grace, only thirst, pain, heat, blood, sharks, and the coppery rotting stench of dead men. Finally, Spooner told Harrell that he planned to end his own life.

Harrell looked into the burned and swollen death mask that was his friend’s face. “How will you do it?”

“I’ll dive down so far that I’ll drown before I come back up.”

Harrell put his hands on his buddy’s shoulders. “Spooner, listen to me. There are only two Marines left in this group, and when everyone else is gone, you’re going to be with me. I know in my heart that God is going to deliver us and we’re going to survive this together.”

‘The prayers continued. … Humble and genuine supplication, punctuated by impassioned stories about loved ones who waited for them at home.’

Harrell didn’t know if he’d gotten through. Quickly, he turned Spooner’s back to him and firmly fastened the other Marine’s life vest to his own. As night set in, Harrell’s vigor ebbed steadily, leeched away in the grip of creeping hypothermia. His mind drifted from the gruesome reality of liquid death and half-eaten corpses to the edge of unreason. …

From eighty souls to seventeen. By Wednesday morning, August 1, that’s how far the count in Harrell’s group had fallen. Sunrise elevated their body temperatures slightly and they were grateful for the warmth. But as the bright orb climbed, it turned unfriendly, scorching their heads. No one talked much. Dehydration had puffed up their tongues so that their words came out as if their mouths were stuffed with cotton batting. Wearing only waterlogged life jackets, the group rode the swells low, chins now resting in the sea. Up, down. Up, down. The only sounds, the slosh and slap of water that seemed larger than the sky.

At midmorning, one man broke the silence with a prayer. Another man followed. Soon, every still-sane man in the group had taken a turn, pleading with God for deliverance. Harrell looked at his watch. It was about 10 a.m.

The prayers continued for three hours. Not rote prayers, not learned ones. Humble and genuine supplication, punctuated by impassioned stories about loved ones who waited for them at home. Lapsed men who had perhaps never prayed beyond their childhood bedsides now cried out, specks in a monstrous wasteland, unseen except by the only One who could see. This they hoped with a fervency that burned hotter than the sun. …

Lyle Umenhoffer floated in his life jacket near the Haynes group, but on a far fringe. His little group had dwindled to fifteen men. To discourage sharks—which seemed less inclined to tear into a mass of men—they tried to float in a tight knot with the weakest and most badly injured at the center. That put Umenhoffer on the outer ring where he had an eye-level view of the man-eating horde. The small ones, three to four feet long, seemed the most aggressive and were tensed to hunt. These were opportunists, snatching and shredding any man who detached himself from the group. 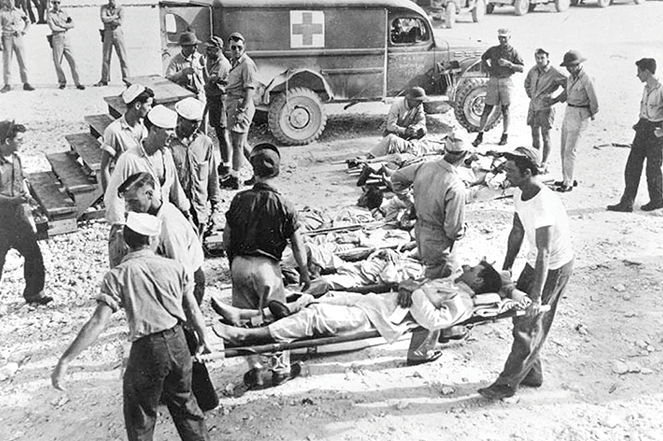 The largest sharks stretched sixteen to twenty feet long. One moment, these behaved like gentle and curious giants, nosing up close to inspect the men with black, unblinking eyes. The next moment they attacked, their steel-trap jaws snuffing out a man’s life before he could draw a breath to scream.

Umenhoffer had developed a technique for dealing with the sharks. He would wait until one of them cruised just alongside, then he would kick it, hard, in the flanks, and the startled shark would dart away. He had administered at least ten such blows, and it worked every time.

Umenhoffer traded looks with the man next to him. Those who knew it had been praying the Lord’s Prayer for three days. It had gotten so that Umenhoffer was pretty sure that any man who was an atheist when the ocean closed over Indianapolis wasn’t one now.

—Adapted from INDIANAPOLIS: The True Story of the Worst Sea Disaster in U.S. Naval History and the Fifty-Year Fight to Exonerate an Innocent Man by Lynn Vincent and Sara Vladic. Available from Simon & Schuster July 10, 2018. Reprinted by permission of Simon & Schuster, Inc.