The latest immigration raids are targeting Iraqi-American Christians for deportation

Friends and family members of Iraqi immigrants rounded up in Detroit watch a bus headed to an Ohio detention center on Sunday. Gus Burns/Mlive.com via AP

Chicago’s Iraqi immigrant community is bracing for raids by U.S. immigration officers after witnessing a sweep over the weekend in Detroit, where federal agents rounded up more than 100 Iraqis, most of them Christians, and sent them to a detention center in Ohio, pending deportation.

“We’ve not seen full-scale raids yet but are hearing stories of agents knocking on doors, looking for people, checking their last known addresses or going to places where they have relatives,” said Christina Abraham, vice president of the Assyrian-American Bar Association and an attorney whose law firm handles immigration cases in Chicago.

Federal agents took the Iraqi-American community by surprise, showing up last weekend at a Detroit area Chaldean church during Mass, at restaurants frequented by the Iraqi Chaldean community, and at homes bearing orders to arrest and deport residents. For one of the largest Iraqi communities in the United States—numbering nearly 200,000 and dating back several generations—the arrests may be just the start of a long battle with U.S. Immigration and Customs Enforcement (ICE).

More arrests appear slated for other Iraqi communities—in Chicago, San Diego, Nashville, and elsewhere—even as reports spread that actual deportations could be imminent. In response the American Civil Liberties Union (ACLU) filed on Thursday a class action petition in federal court in Michigan on behalf of the Iraqi nationals detained, saying they face “the very real probability of persecution, torture or death,” if removed to Iraq.

Efforts to deport Iraqis represent the latest Trump administration effort to crack down on immigration, but this initiative runs headlong into U.S. foreign policy. The State Department in 2016 declared ISIS actions in Iraq against Christians and others to be genocide, and its latest travel warning (updated June 14) warns all residents that travel to Iraq “remains very dangerous.”

Those dangers haven’t stopped U.S. immigration authorities from pursuing deportation, and recent arrests appear to target Christians with criminal records. In a statement issued by ICE’s Detroit office on Tuesday, the agency said the detainees have criminal pasts and already face final removal orders from a judge. In addition to the 114 arrests in metro Detroit, ICE said it arrested 85 Iraqi nationals outside of Michigan and has final orders for removal of 1,444 Iraqi nationals nationwide.

It’s not clear why the removal orders fall mostly on the Christian community, though they appear to stem from an agreement between President Donald Trump and Prime Minister Haider al-Abadi, with Abadi for the first time agreeing to waive travel documents so Iraqis could be deported from the United States to Iraq. In exchange, the president dropped Iraq from the list of predominantly Muslim countries where immigration to the United States was suspended. Under Trump’s first immigration executive order in January, Iraq was included in the 90-day ban on travel, but the president dropped Iraq in a subsequent order issued March 6. 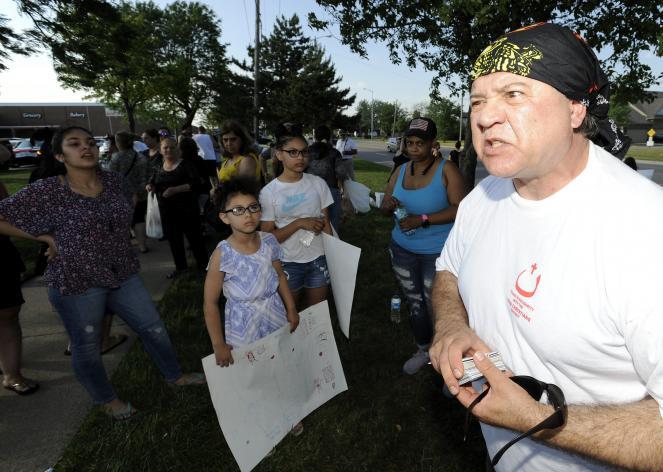 Tom Kalasho, founder and CEO of the National Organization of Iraqi Christians, at a protest in Sterling Heights, Mich., on Monday Todd McInturf/Detroit News via AP

Leaders in Detroit’s Chaldean community say these cases have been pending for years, and those involved have tried to resolve them at least since 2010. A criminal conviction does not automatically cancel permanent residency (or green card) status, and it’s unclear why many with criminal records—but posing no clear threat to national security—are being singled out.

“These Christians are people who have committed a crime and paid for it, they’ve paid their debt to society, and now they may be removed to a country where our State Department says genocide against Christians is underway. It’s very strange to have our government send them to a war zone,” said Joseph Kassab, a Detroit resident and longtime advocate for Iraq’s Christian minority and the former executive director of the Chaldean Federation of America (CFA).

Kassab said as many as 700 Detroit-area Iraqi Christians faced questions and possible deportation seven years ago, and CFA prepared files to provide legal assistance on each of them. At that time the Iraqi government refused to cooperate in waiving travel documents for them to return to Iraq. And ICE under the Obama administration did not pursue legal action against them, implicitly allowing them to remain in the United States though their legal status was in limbo.

“Now this is haunting us again,” said Kassab, only this time the Iraqi government has waived travel documents, allowing for immediate deportations as part of what many complain is a quid pro quo that sells out the Iraqi Christian community.

“What’s politically expedient on both sides is being done at the cost of these Iraqi Christians,” said Abraham, speaking to me by phone in Chicago. “The Iraqi government clearly doesn’t care about making Christians safe in Iraq because it has failed to do so over these years of war with ISIS, but it’s willing to sell out these Christians to be off the list.”

Khaalid Walls, spokesman for ICE’s Michigan office, told the Detroit Free Press on Monday: "As a result of recent negotiations between the U.S. and Iraq, Iraq has recently agreed to accept a number of Iraqi nationals subject to orders of removal.”

Kassab disputes that, saying there are “no capital crimes” among those detained for deportation, and most of the cases involve drug charges and robbery. Criminal convictions are what led to losing permanent residency status. “These are not people who entered the United States illegally,” said Kassab. “They were lawful permanent residents who lost their green card status and for a variety of reasons did not win it back.”

Kassab said many of the cases he has worked with involve Iraqi-Americans who have lived in the United States for decades. Many do not speak Arabic, having immigrated to the United States with their families as young children. At least one man detained, he said, was born in Kuwait and has never lived in Iraq. For most Chaldeans, the communities they originate from are in Nineveh Plain where ISIS has damaged or destroyed towns it occupied starting in 2014, and Iraqi forces are currently battling ISIS in the area.

Like many of these cases, the details of Nahidh Shaou’s are complex. A 55-year-old U.S. Army veteran and a Chaldean Christian, Shaou was detained before the latest sweep, but ICE recently moved him to Youngstown, Ohio, where the latest detainees also are being held for deportation.

Shaou had joined the Army at age 17, but his application for U.S. citizenship was put on hold when he was deployed overseas, where he served in the DMZ between North and South Korea, and was honorably discharged. In 1983 Shaou pleaded guilty to armed robbery and shooting and wounding a Detroit police officer. Shaou blames PTSD for his crimes, but served his 34-year sentence without being allowed to legalize his residency status. ICE slated him for deportation at the end of his sentence this year.

Detainee families were notified this week to transfer any bags for deportees to carry with them by today, according to Shaou's niece, Tiara Shaya. Shaya said her family had not been notified of any definite plan for his removal. His attorney, Rich Kent, said sending him to a place like Iraq is “imposing a death penalty through the back door.”

After its filing, the ACLU notified family members that deportations would be delayed until a federal court hearing slated for June 21.

According to ICE reports, deportation officers arrested 41,318 individuals between Jan. 24 and April 30—representing a nearly 40 percent increase over the same period in 2016. But the Trump administration is trailing last year’s stats on actual deportations by 12 percent, as confusion over the current policy leaves more and more cases in legal limbo or tied up in court.

(Editor's note: This article was updated at 11:38 a.m. on June 16 to include new information about a federal court hearing on June 21.)